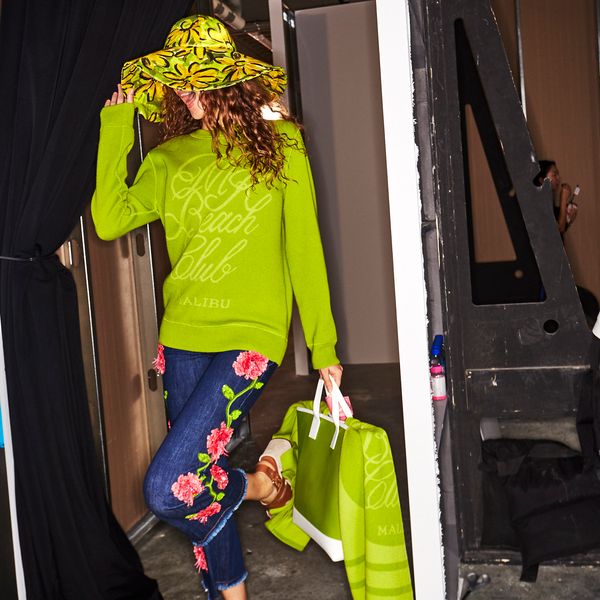 Michael Kors enlisted Brooklyn-based Australian artist Christina Zimpel to paint the seats and divider walls at his spring 2019 show at Pier 17 on the Lower East Side. The former art director of Australian Vogue also applied her bright acrylic works — mirthful scenes of umbrella dotted shorelines and sailboats at sea — to tote bags throughout the collection. Zimpel also painted a portrait of Kors wearing his signature black glasses which hung backstage.

The phrase "MK Beach Club" in script font was impressed into leather and canvas handbags, knit into lime green sweaters, and applied to turquoise beach towels. With locations like Malibu and St. Tropez emblazoned below, far-flung getaways were front of mind for the designer who's known for his jet-set design sensibility.

Flared trousers and jumpsuits alongside fringe trimmed skirts, dresses, and crossbody bags brought dynamic motion to the collection. Covered in bright colors including red, teal, and lemon, and bold patterns like painterly florals, python, zebra, and leopard, the flourishes inspire a surge of optimism.

Stars including supermodel Iman, Catherine Zeta Jones, and Judith Light sat front row at the show. Tiffany Haddish (who's taking part in her very first NYFW this season) and Nicole Kidman really hit it off and were photographed with their hands and arms intertwined.