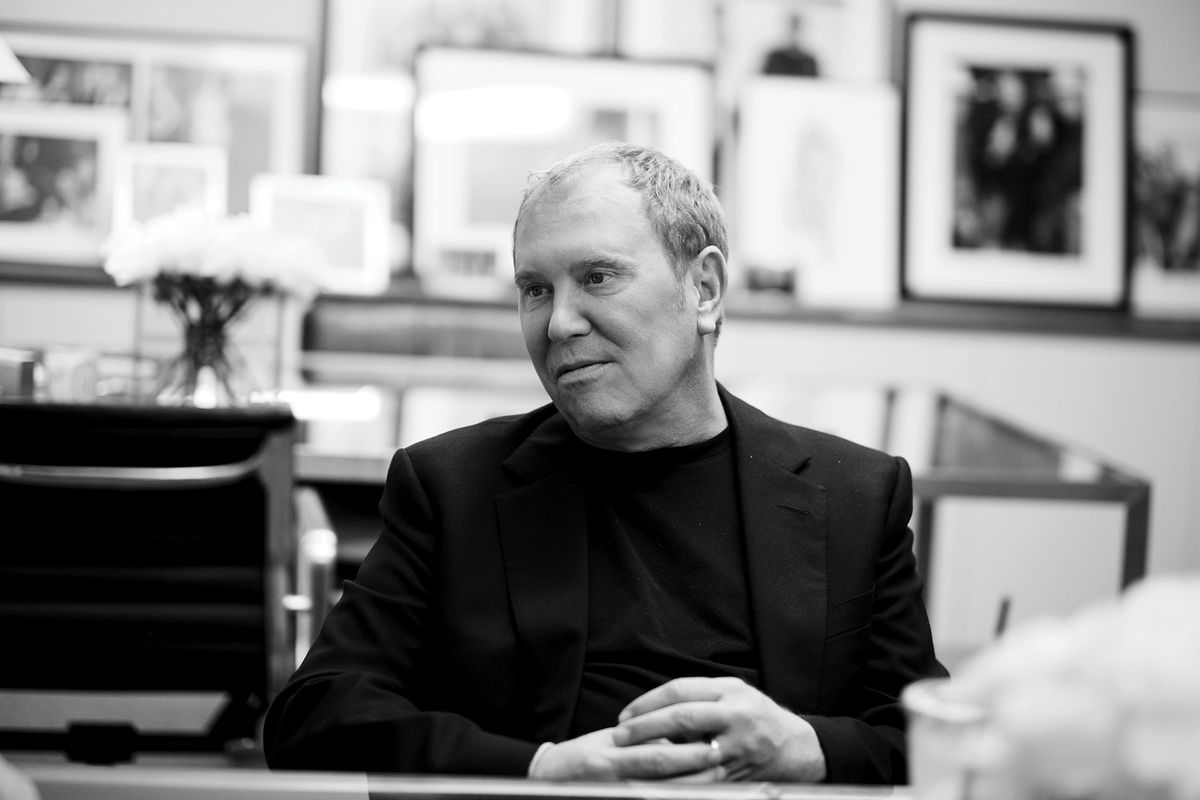 When you think glamorous American fashion, you think Michael Kors. Think Ali MacGraw goes to Aspen. In addition to being a busy designer, he's also a diehard fan of astrology, especially AstrologyZone's Susan Miller. Miller is a stargazing superstar whose high-profile fans have been known to move meetings, refuse to sign contracts and even reschedule fashion shows to fall on dates that Susan has given the thumbs-up to. For this installment of Reserved, we brought Miller, wearing a lace Michael Kors dress, to meet Kors, a Leo with Libra Rising, to chat about style, business and Kors' fabulous astrological chart.

Susan Miller (looking at Michael's chart): You have what we call a Crown of Stars. When you have a conglomeration like that, it usually means prominence. So if I were seeing your mom in the hospital right after she had you I would've said, “Your son's probably going to be known by many, many people." Jupiter, the giver of gifts and luck, is at the very highest point in your chart, and it rinses the whole chart with luck. It means you do very well overseas, but also this is the college market as well.

Michael Kors: Well, now we have 12-year-old clients — and even little 10-year-old girls in heels.

Susan Miller: Older people are also good for you. You could have a friendship with somebody older who has some very wise advice. Because this is the friendship house. I have to say, you have many, many friends, but very few come into your inner circle.

Mickey Boardman: Susan, is that a fabulous combo?

Susan Miller: Yes. He (Virgos) likes to work all the time. Leo's job is to make us realize that life isn't just about work. And your partner, Lance, is very obsessed with getting tasks done. But you drag him out of the house, which is a good thing. That's why you like being together. Michael, you're Aquarius Rising. You know who has that combination? President Obama. Exactly the same. He's Leo with Aquarius Rising too. So you could run for office, Michael. Oh, you have the moon in Libra by the way. And Libra is the sign of partnership. You know Kim Kardashian,   she's a Libra! It rules marriage, but it rules collaboration too.

Mickey Boardman: Michael, when you meet people, or like, when you first dated Lance, do you always ask what their sign is?

Mickey Boardman: Is there a wrong answer and you go, “Oh, no!"

Michael Kors: I have different reactions to different signs. It's pretty consistent. Between work and friends and family, I have a wide variety of people. It seems that there are a lot of Taurus women who are Michael Kors women.

Mickey Boardman: Any signs you particularly get along with well?

Michael Kors: My family, every person, all four grandparents, most of my aunts and uncles, my mom, everyone is a Cancer.

Michael Kors: They're all Cancers. They're very traditional.

Susan Miller: Growing up, did you have very few friends? Did your family move away? What happened? Or were you just a shy kid?

Michael Kors: I'm an only child. I hung out with adults. I was happy to go to an adult cocktail party (laughs) with a cheese puff and a virgin whiskey sour. That was my idea of heaven.

Mickey Boardman: One thing that I love about your shows is that they're optimistic. The models are fast and breezy, and they're pretty and they're glamorous and the music is the best, most upbeat music.

Michael Kors: Fashion's not an easy job, but I'm kind of an old-fashioned cock-eyed optimist. I think when people put on the right thing, they feel different. So, I'm convinced that you could be having the most horrible day in the world, and you put on one thing and you still feel down in the dumps and then you put something else on and you look in the mirror, and you're like, “Okay, I'm ready to begin again."

Mickey Boardman: When I think about feeling glamorous, I think of the Supremes in Las Vegas in the '60s. To me, that's the ultimate fabulousness. Is there a moment from your childhood when you experienced this?

Michael Kors: I will give you exactly that, Mickey. It's really no bullshit. My grandparents traveled a lot, lived large. When I was really small, they would come back from a trip, and it was always lots of luggage, lots of clothes, lots of jewelry, lots of wigs. They were big gamblers, and they loved Las Vegas, Miami and Hawaii, any place warm and glamorous. The moral of the story is that all I wanted was to go with them on vacation. And my mother kept saying, “You're not old enough." And then, one year, when I was seven, I opened my Hanukkah gift and there in the box, a small box — I was used to a big box; “Where's the coat?" (laughs) — I open it up, and there was a plane ticket and I looked at it and it was New York to Miami and I said, “What is this? We're going to Florida?" And my mom said, “No, you're going with your grandparents for Christmas and New Year's Eve and you're going to the Fontainebleau." I couldn't be more excited. New Year's Eve at the Fontainebleau was Diana Ross and the Supremes! That was my entrée.

Mickey Boardman: So if you were old enough at seven, how old were you when you asked and your parents said no? Four years old?

Michael Kors: Yes! (laughs) And I know exactly what I was wearing New Year's Eve. It was so chic, because it made no sense. I had on an optic white corduroy blazer with white leather braided buttons, and a turquoise shirt, white trousers and white crushed patent leather loafers. I looked like an ice cream man. The pictures are insane. And I remember I was so excited. It was Miami. It was the Fontainebleau. It was the Supremes. And then, it was also like oh, you're in a nightclub. This is so adult, which I thought was really kind of exciting.

Susan Miller: Leos not only have incredible taste, they're beautifully talented with color and design. Let me show you how we learn everything from Mother Nature. The buds are in April, then the Oxen helps the farmer sow the seeds in May, then in June, we have to wait for the seeds, and that's Gemini, and then we come home in July when we start canning things. In August, which is the time of Leo in the astrological chart, we're waiting for the big harvest in September. And what the workers used to do was entertain each other and wear masks. You didn't have TV or computers, so they wore costumes. That's where the entertainment value comes to your sign, Leo.

Mickey Boardman: Looking at the chart, Susan, do you see anything Michael should watch out for?

Susan Miller: Let's see, the best part of your chart. Oh wow, right now your chart is unbelievably good for prosperity, for money. Your friends might say, “Oh, we're still in a recession." But not you. Mercury goes into retrograde August 30–September 22. We're looking at a very slow economy. April, May, June, July, August, September are difficult months, so I want you to move up your timetable. Start getting things under wraps. Get them done. I know it's hard, because you have a show.

Michael Kors: I have three seasons in my brain right now. I actually have more because here's how crazy it is — I feel that until the clothes are in the shops and until I see it on someone's back, like when I see someone at a party or when it's on the street, that's when the baby is fully born. It's not even just born at the show. Resort 2015 is going into the stores now, and then, next I show Pre-Fall in December, then at the end of January, we will show Men's Fall. Then in February, we will have concurrently Spring Women's and Fall Women's. One will be in the stores; one will be on the runway. There's always something.

Mickey Boardman: You don't think it's too much?

Michael Kors: I think the world's too much. If fashion reflects the world, then the world is too much. It's just the way of the world right now. We could bemoan it, but it's the reality. Life's fast. I have no gray ground. I'm either on, or I'm clicked off. I could never work a normal 9 to 5.