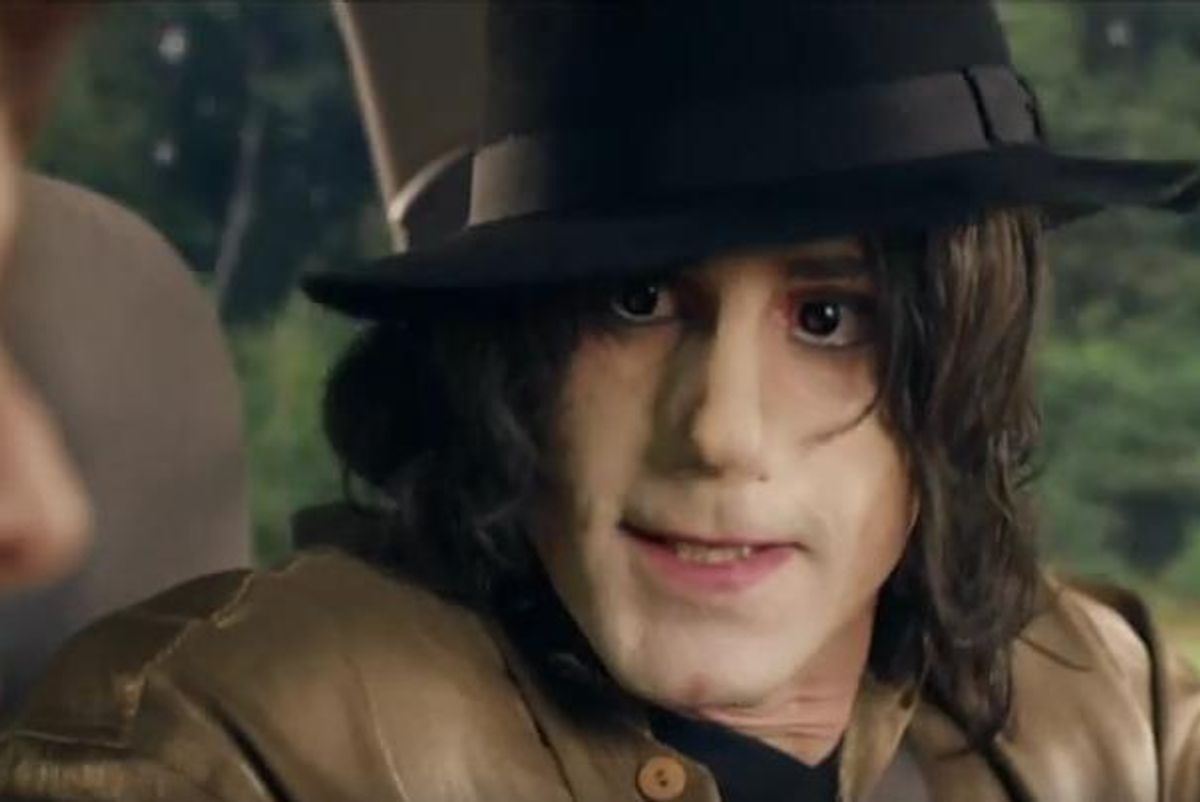 Carey O'Donnell
UPDATE: British broadcasting company, Sky TV, have announced that they will no longer be airing the episode of their satirical Urban Myths show featuring Joseph Fiennes as the late Michael Jackson. The decision comes after Jackson's family, especially his daughter Paris, voiced their disgust with the show. "Where is the respect?" she said, mentioning she was also offended by the portrayal of her godmother, Elizabeth Taylor. "They worked through blood, sweat and tears for ages to create such profound and remarkable legacies. Shameful portrayal."

UPDATE: Paris Jackson, the only daughter of the late Michael Jackson, has tweeted her disdain for Fiennes' inexplicable portrayal of her dad.

@TheMJCast i'm so incredibly offended by it, as i'm sure plenty of people are as well, and it honestly makes me want to vomit.
— Paris-Michael K. J. (@ParisJackson) January 11, 2017

The trailer for Urban Myths, a new dark British comedy, has been loosened onto the internet, and we get our first glimpse of Joseph Fiennes as the late and great Michael Jackson.

The film is broken into mini shorts, each one bringing a "maybe/maybe not true" celebrity urban legend to life--Fiennes stars alongside Stockard Channing (as Elizabeth Taylor), and Albert Finney (as Marlon Brando); Jackson, Taylor, and Brando allegedly fled New York City together following the 9/11 attacks on a road trip.

While the story has been debunked, a white man playing a black man is very much happening. Fiennes himself expressed hesitation over taking on the role, stating:

The decision with the casting and the producers -- I wrangled with it, I was confused and shocked at what might come my way. And I knew the sensitivity, especially to Michael's fans and to Michael's family. It doesn't negate who he was.

Still, the internet is none-too-pleased.

I woke up feeling like it's going to be a beautiful day and then I remembered this is someone's idea of Michael Jackson: pic.twitter.com/sG8oxEUfs0
— Soledad O'Brien (@soledadobrien) January 11, 2017

u know things are bad when the "joseph fiennes as michael jackson" story is the story thats getting buried here
— jomny sun, authoer (@jonnysun) January 11, 2017

Waking up to Tr*mp'a antics and Joseph Fiennes over here Dolezal-ing Michael Jackson is a lot for a Wednesday before sunrise.
— Brittany Packnett (@MsPackyetti) January 11, 2017

Watch the shitshow below.