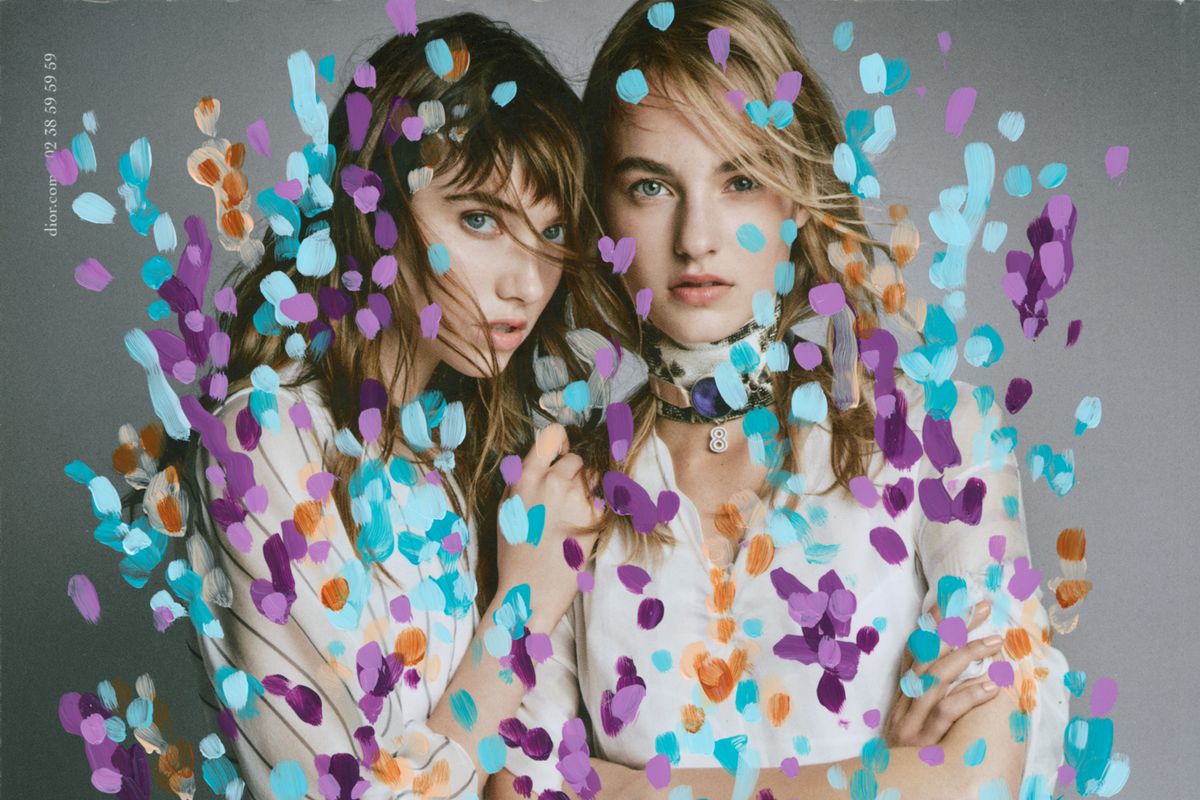 Street artist Michael De Feo is all about flower power. In fact, he's known for it. In the '90s, his five-petal drawings were ubiquitous in New York streets, and they continue to appear around the world, earning him "the Flower Guy" moniker as well as local and international recognition from magazine covers to museum and gallery shows. Lately, De Feo has been enjoying enthusiasm from a new, and rather unlikely, audience: The fashion world. Brands such as Neiman Marcus, J. Crew, and Christian Louboutin have all embraced his recent work, in which he paints flora atop fashion advertisements taken from magazines and bus shelters. For De Feo, these ads act as a canvas for art, rather than a surface to graffiti, using colorful acrylic paints in a sweeping, Post-Impressionist-esque manner (think Van Gogh's brushstrokes).


In his first show at Danziger Gallery, through August 12, De Feo is exhibiting 34 new works in this style, with paintings made with magazine pages, bus shelter billboards, and covers from Vogue, Playboy, Elle, and more, including memorable campaigns such as Rihanna by Steven Klein for Dior. Earlier this week, De Feo invited PAPER to his West Village studio, which is dotted with stacks of magazines, paintings and other works from his archive, and a few six-foot-tall works-in-progress, to chat about why he manipulates media images, the contradictions in his work, and--what else?--flowers.


Can you tell me about the show at Danziger?

It's the first showing of this body of work in New York. We did a show in April in Amsterdam and Paris. And then we did the show in Houston in June. I'm really excited about the work that's in the show. I'm very excited to be working with James's gallery because he is a photo-based gallery. His artists are either photographers or artists that use photography in their work. I really like that I'm participating in a conversation about my work that's in that world, which is important to me. The show has two bus shelter paintings, three canvas works, and others.

Did you swipe those large ads from bus stations?

Add value in some way.

Exactly. Almost 25 years ago, I started by doing very simple things on the street, stenciling and paintings on paper that I was gluing to walls. Over the years, my work has changed and morphed. After doing a series of these flowers paintings in bus shelters — this is the beginning of 2015 — I developed a collection of ads I was removing in the studio.

How many do you think you had collected by then?

Not many. Just a handful. Five or six. I started to paint on those, just experimented. And I really liked it. I liked that I was interacting with the stuff that I was taking out. At that point, I was like, "Oh, shoot. I should put this back into the bus shelters and see what happens." I'm not completely obliterating the ad with the paint. I think for passersby, initially they might just think that what they're seeing is an ad and that it hasn't been tampered with or subverted in any way. But I have seen people stop and do a double take and realize that it has been messed with. 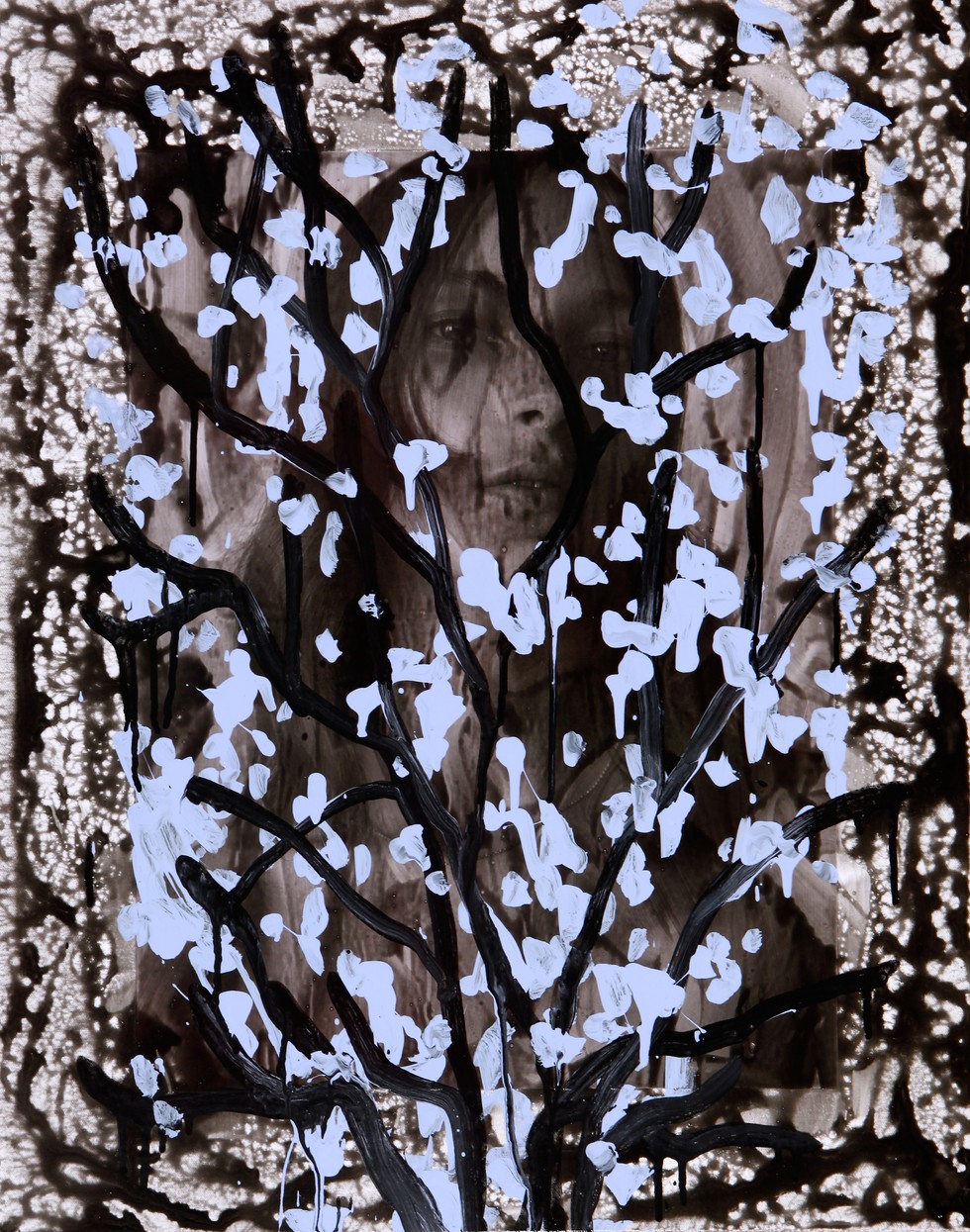 Untitled (Julia Bergshoeff by Josh Olins for The Last Magazine, Issue No.14, Spring 2015), 2015 acrylic, urethane and magazine page on canvas 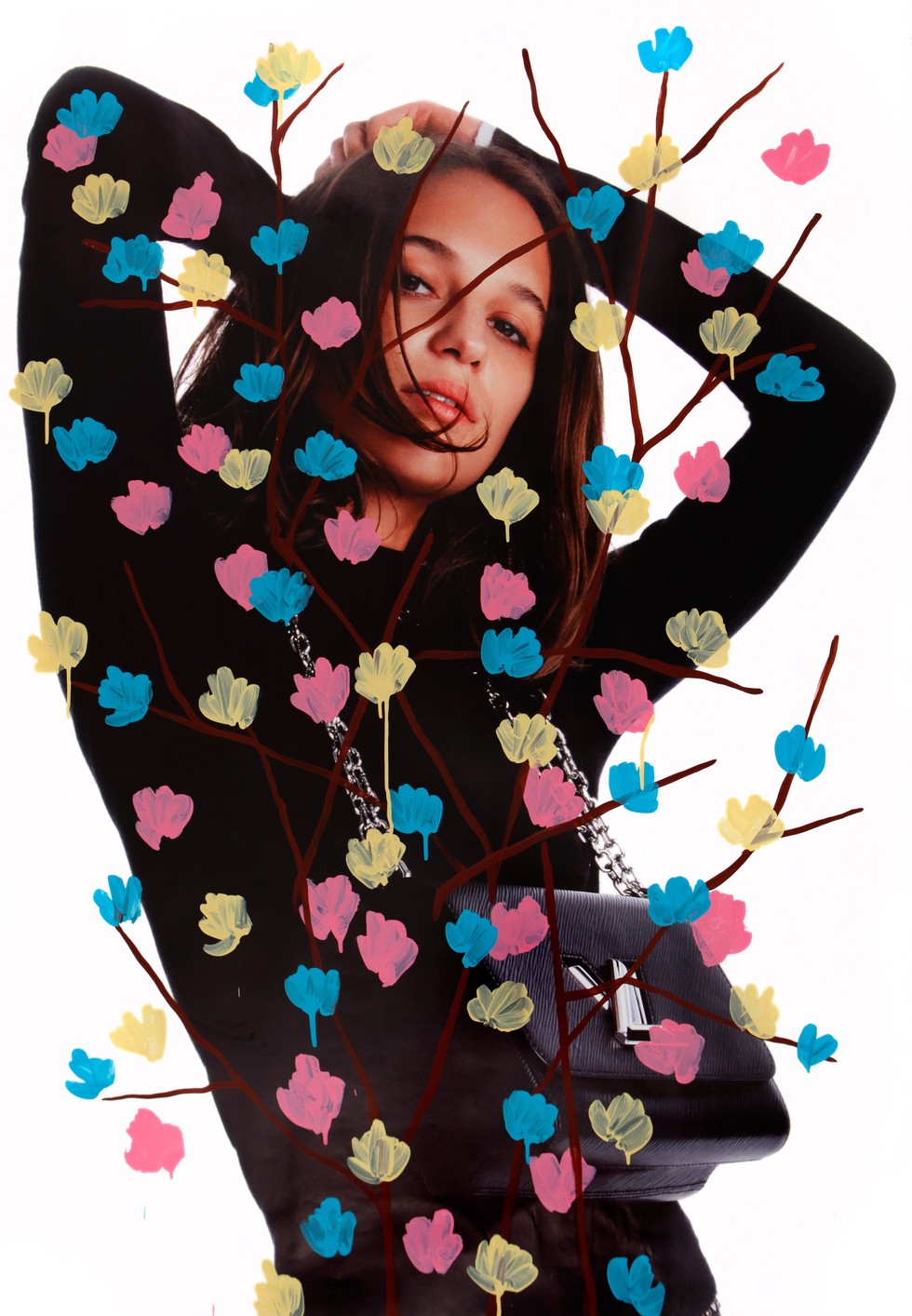 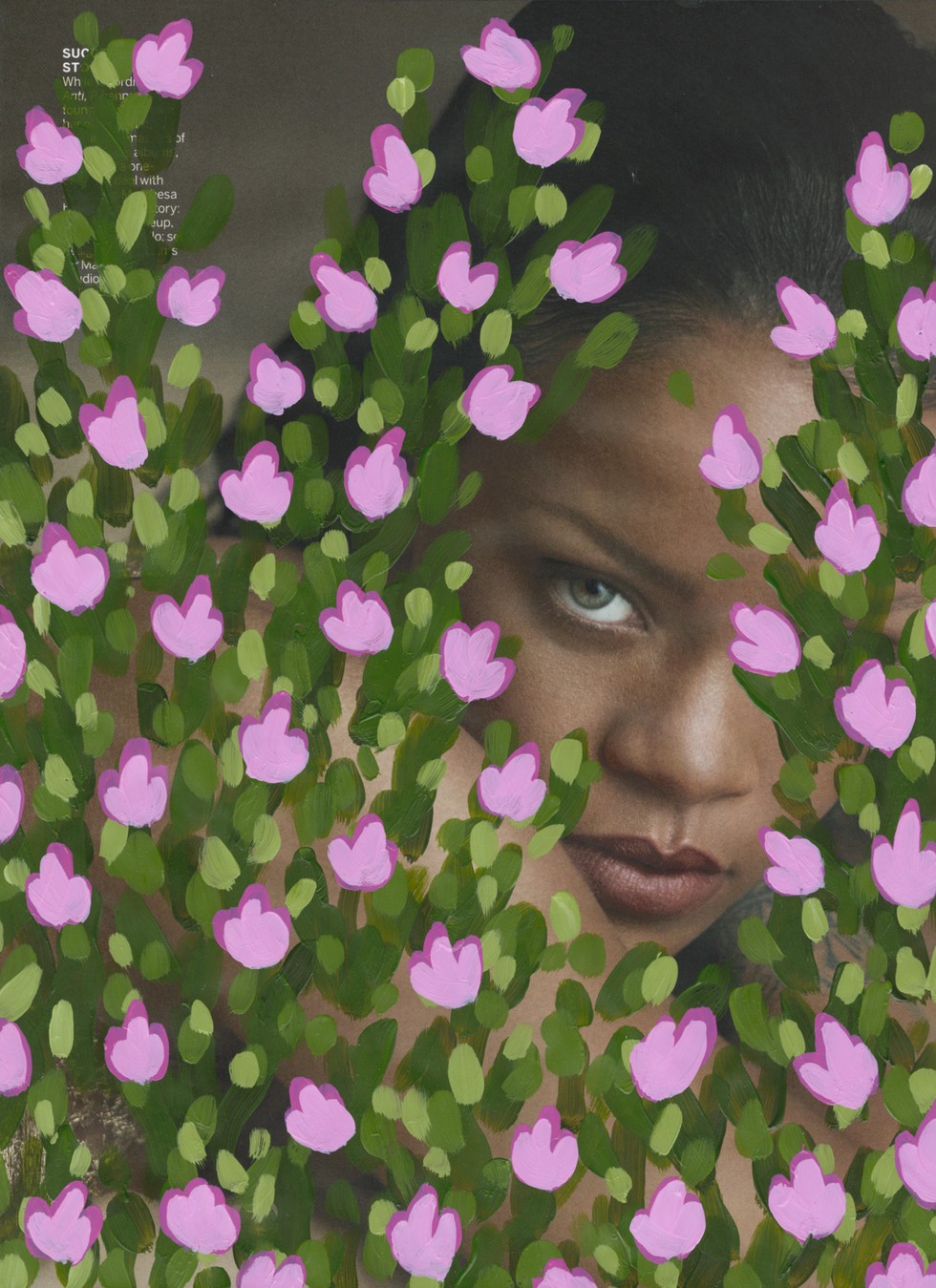 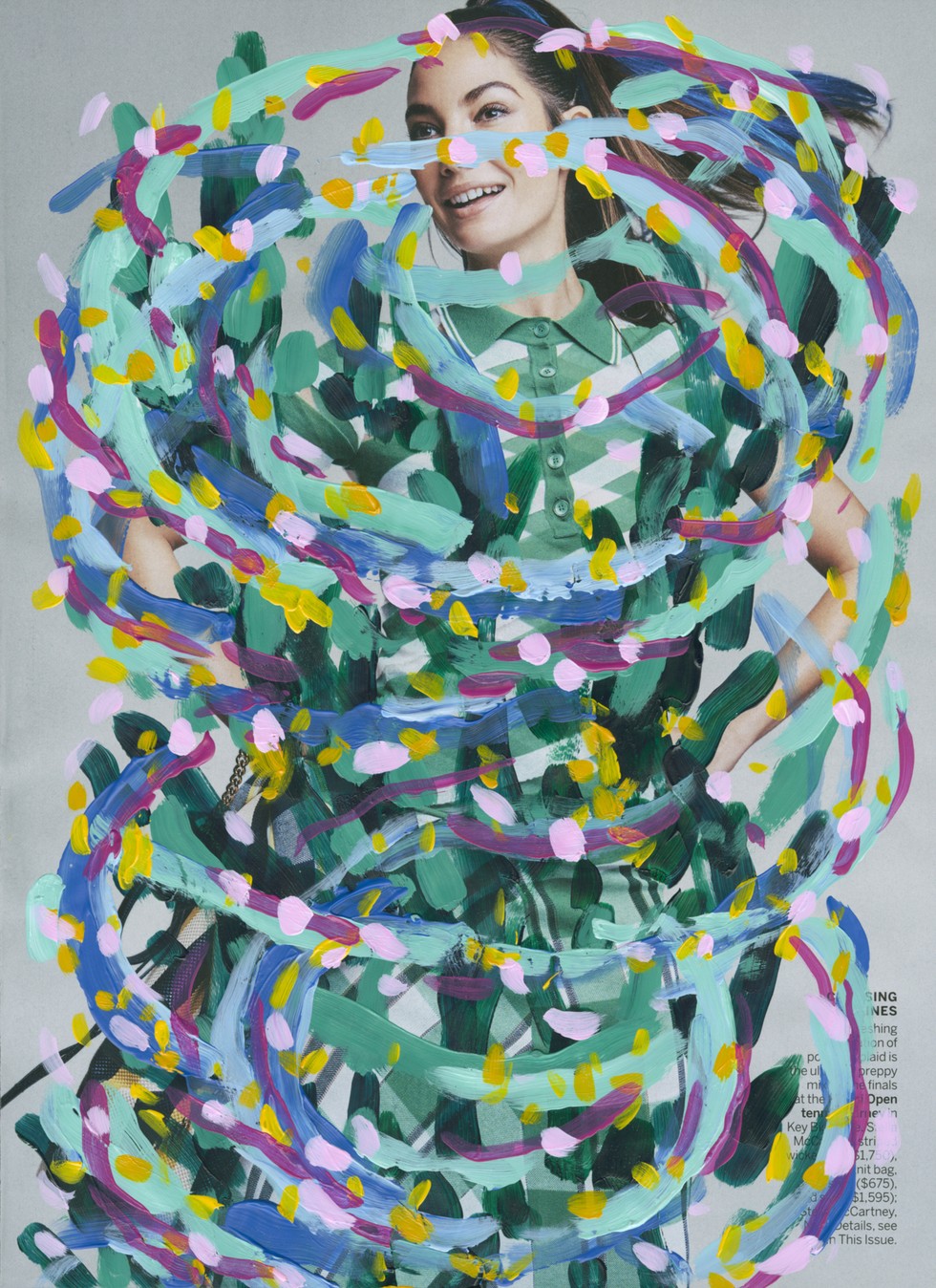 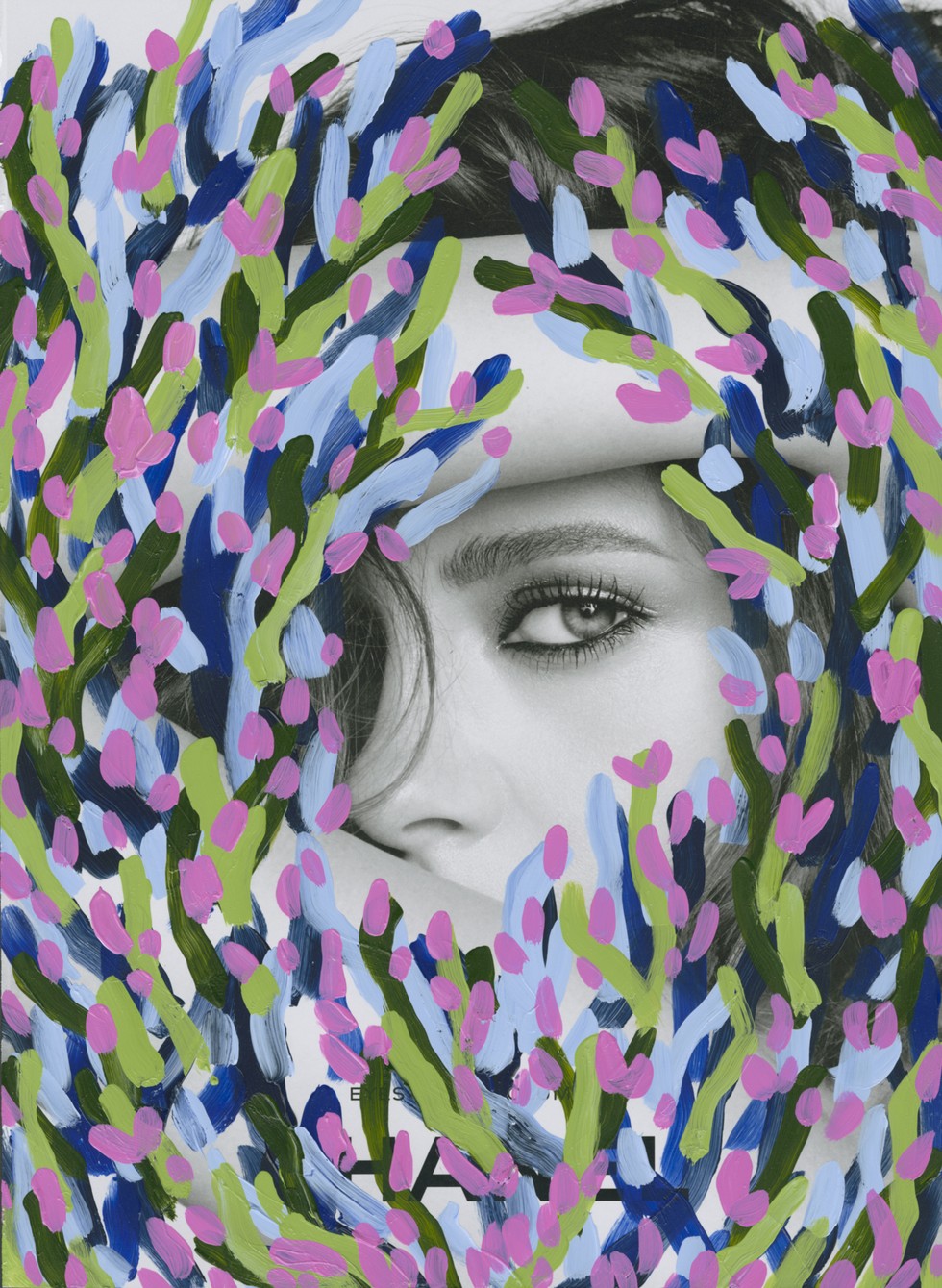 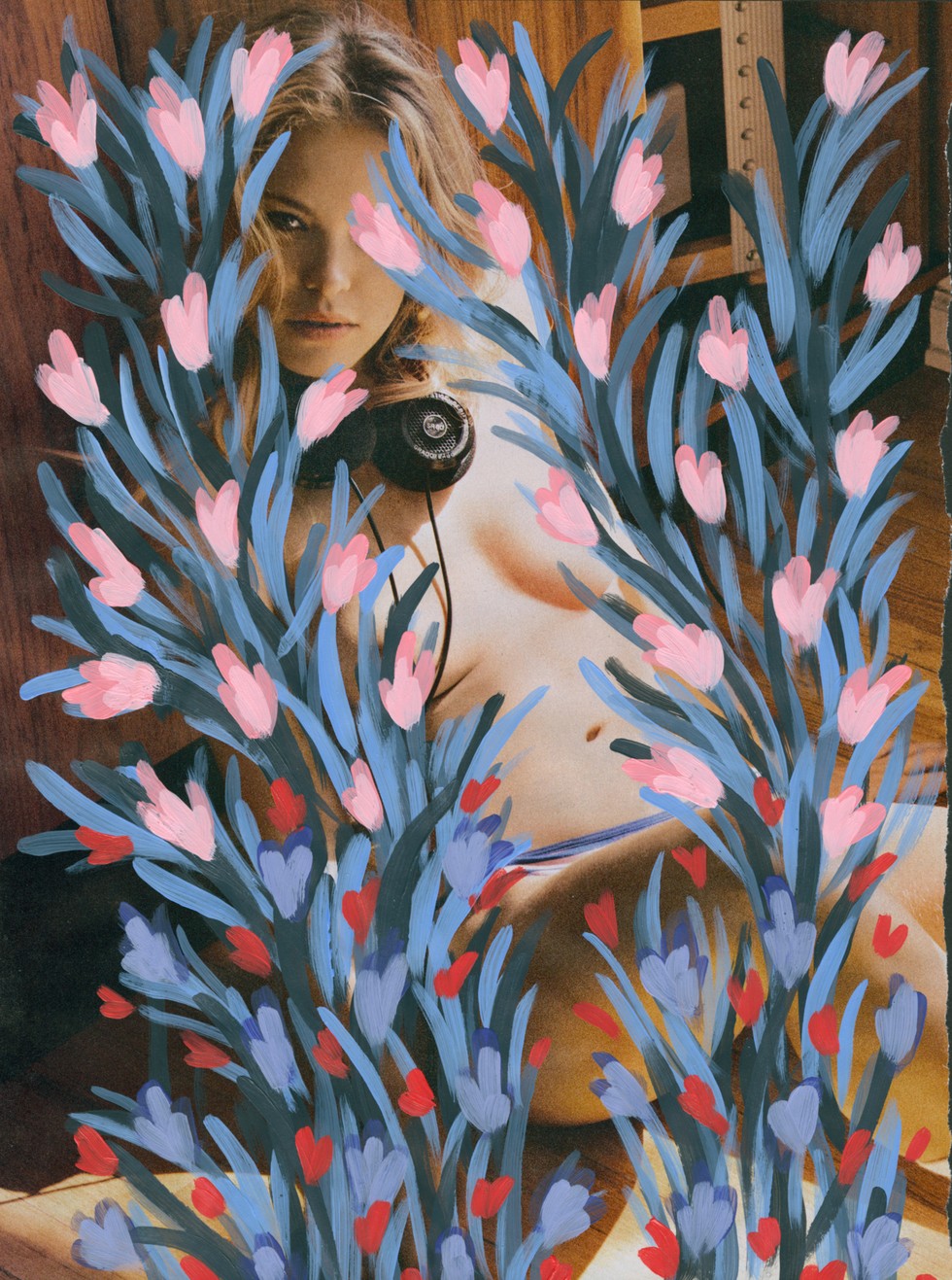 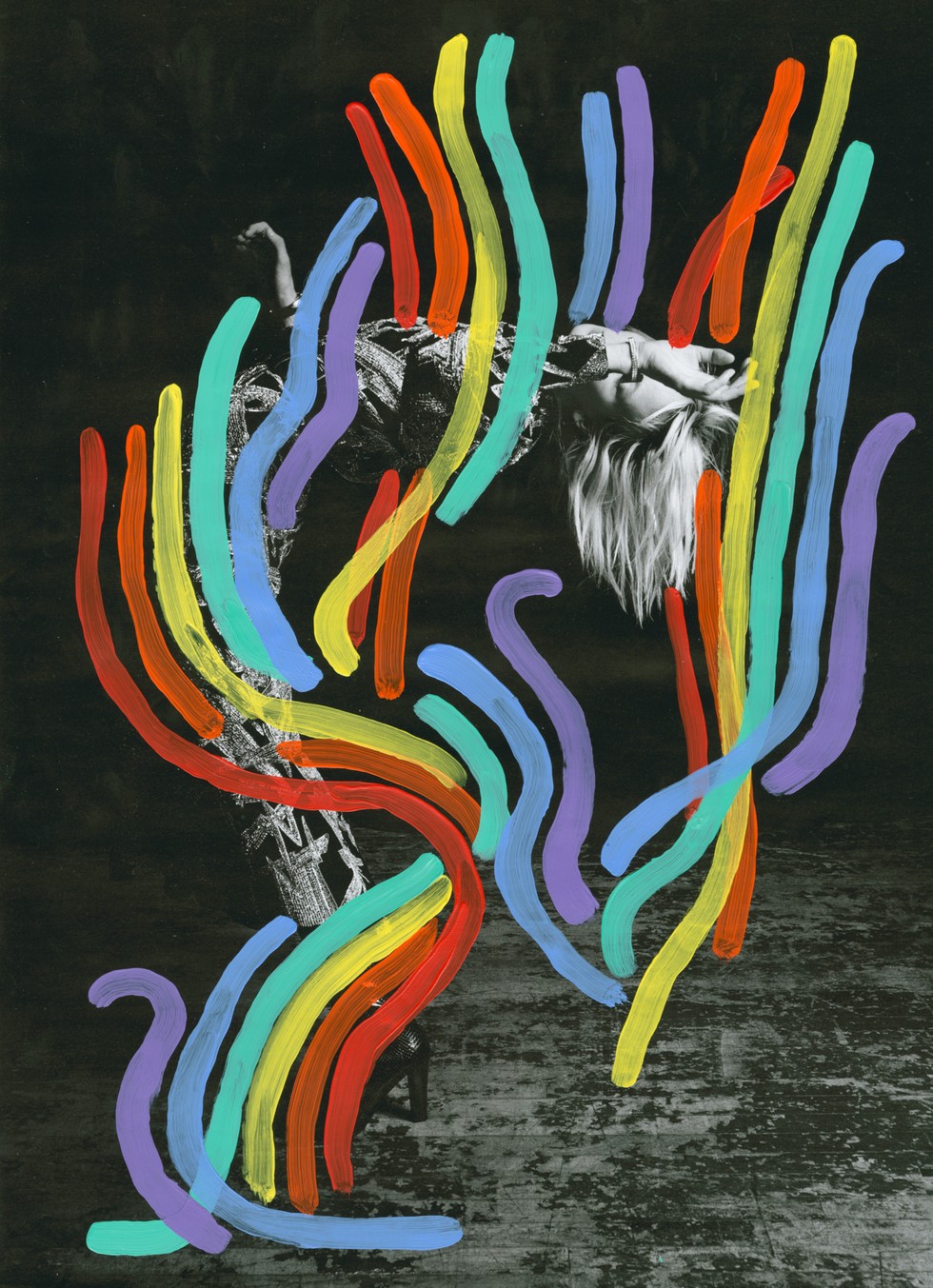 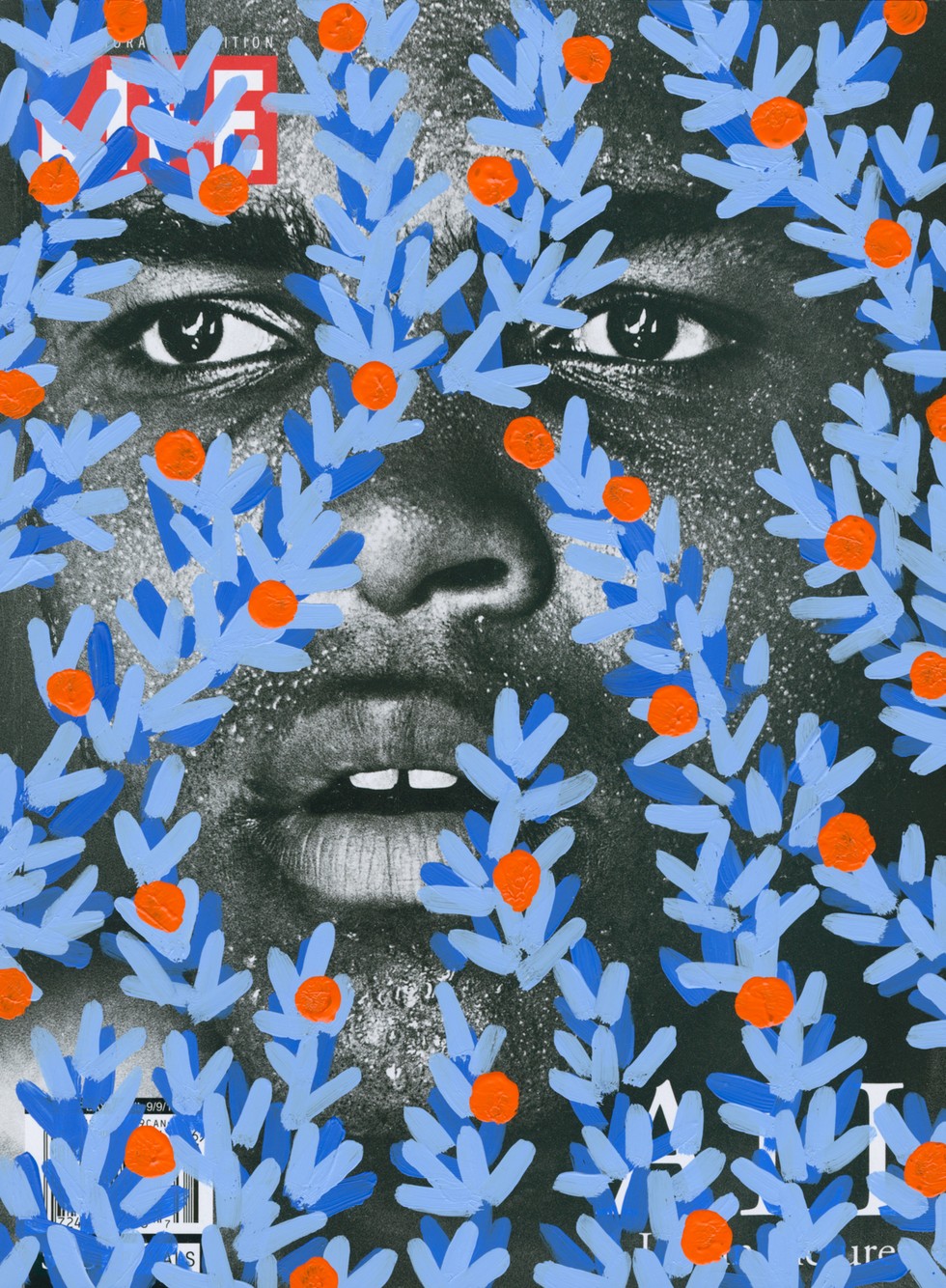 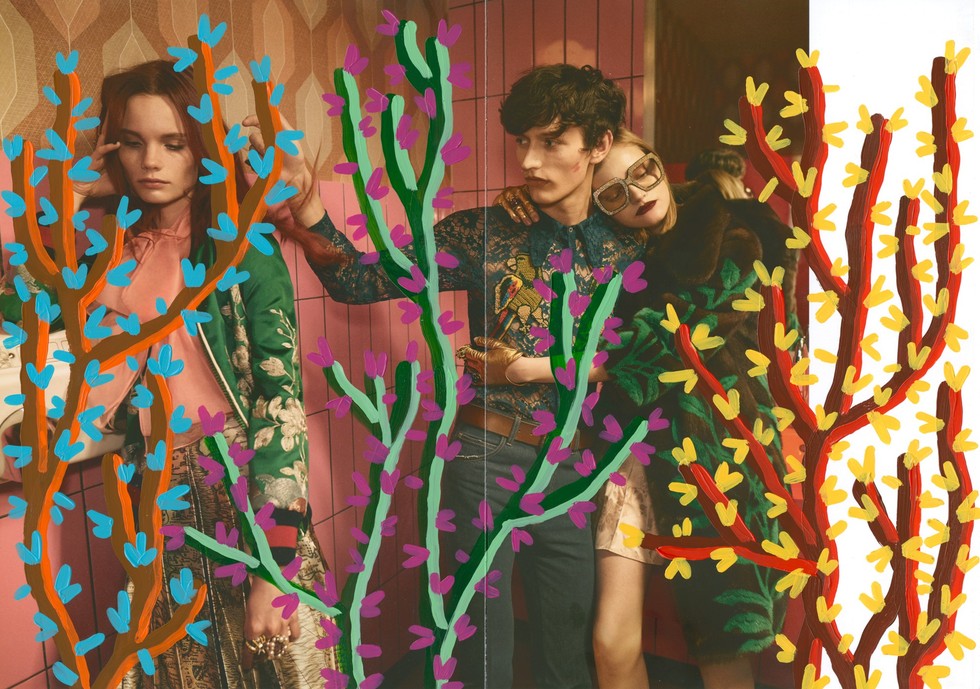 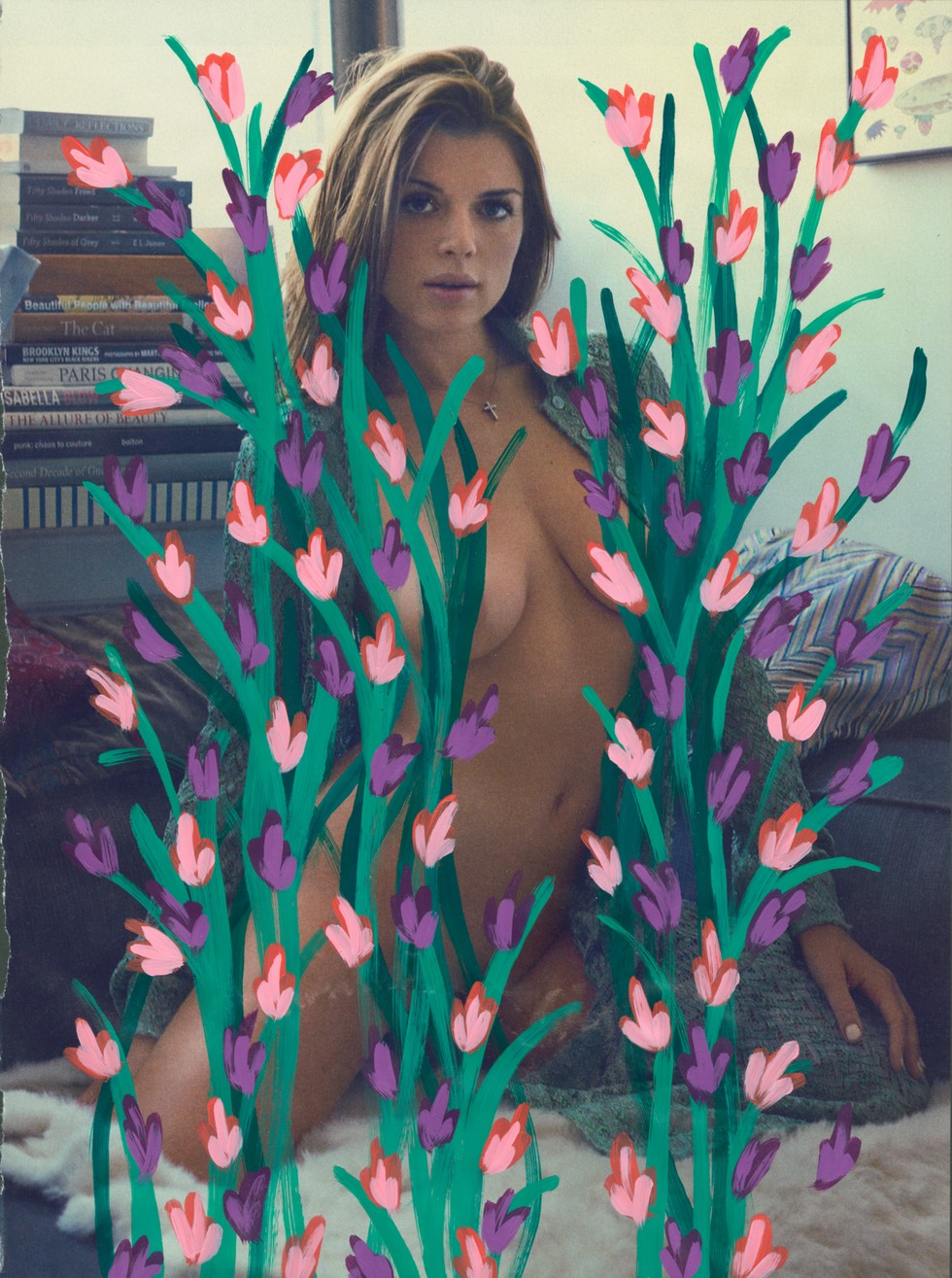 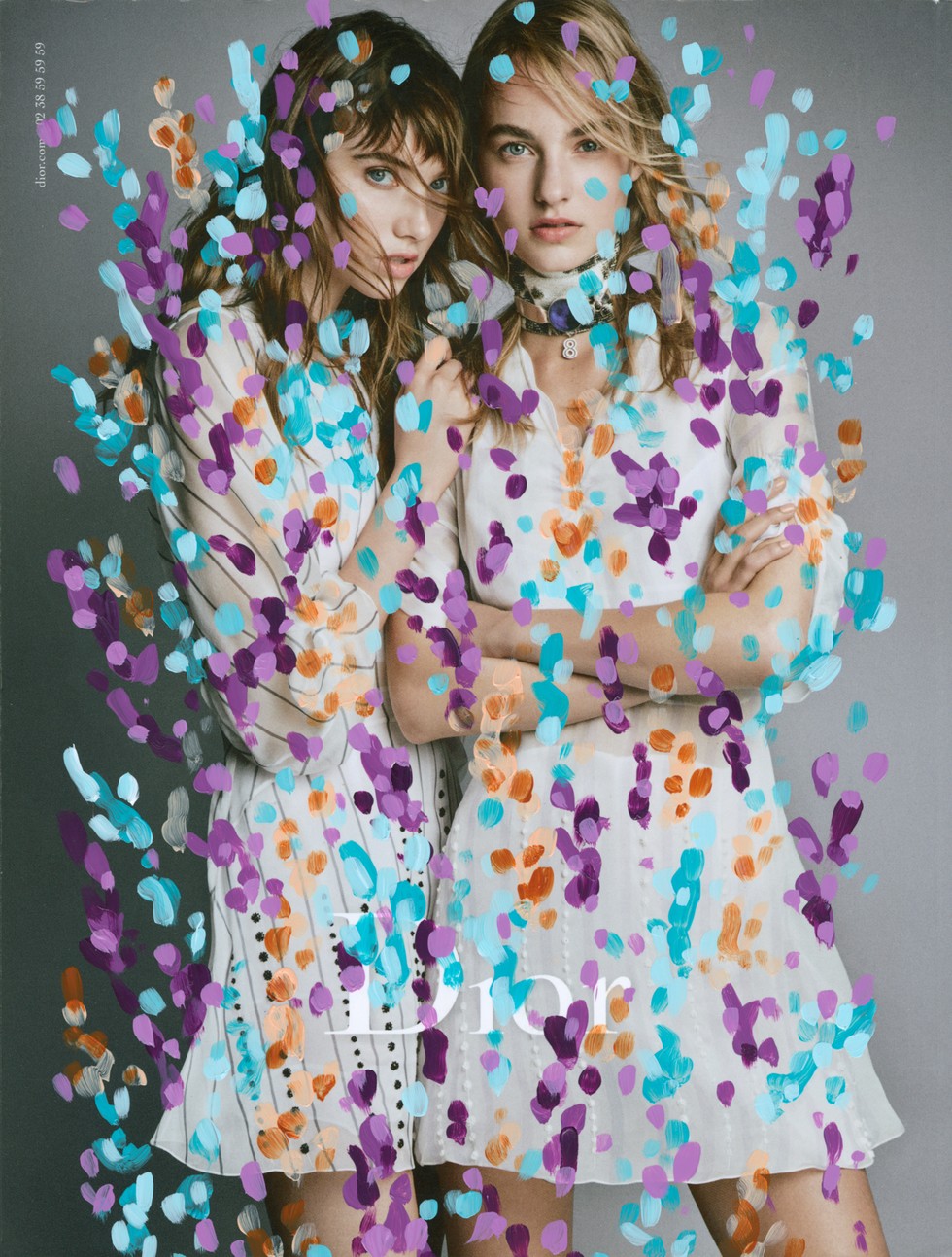 Untitled (Maartje Verhoef and Grace Hartzel by Patrick Demarchelier for Dior), 2016, acrylic on magazine back cover 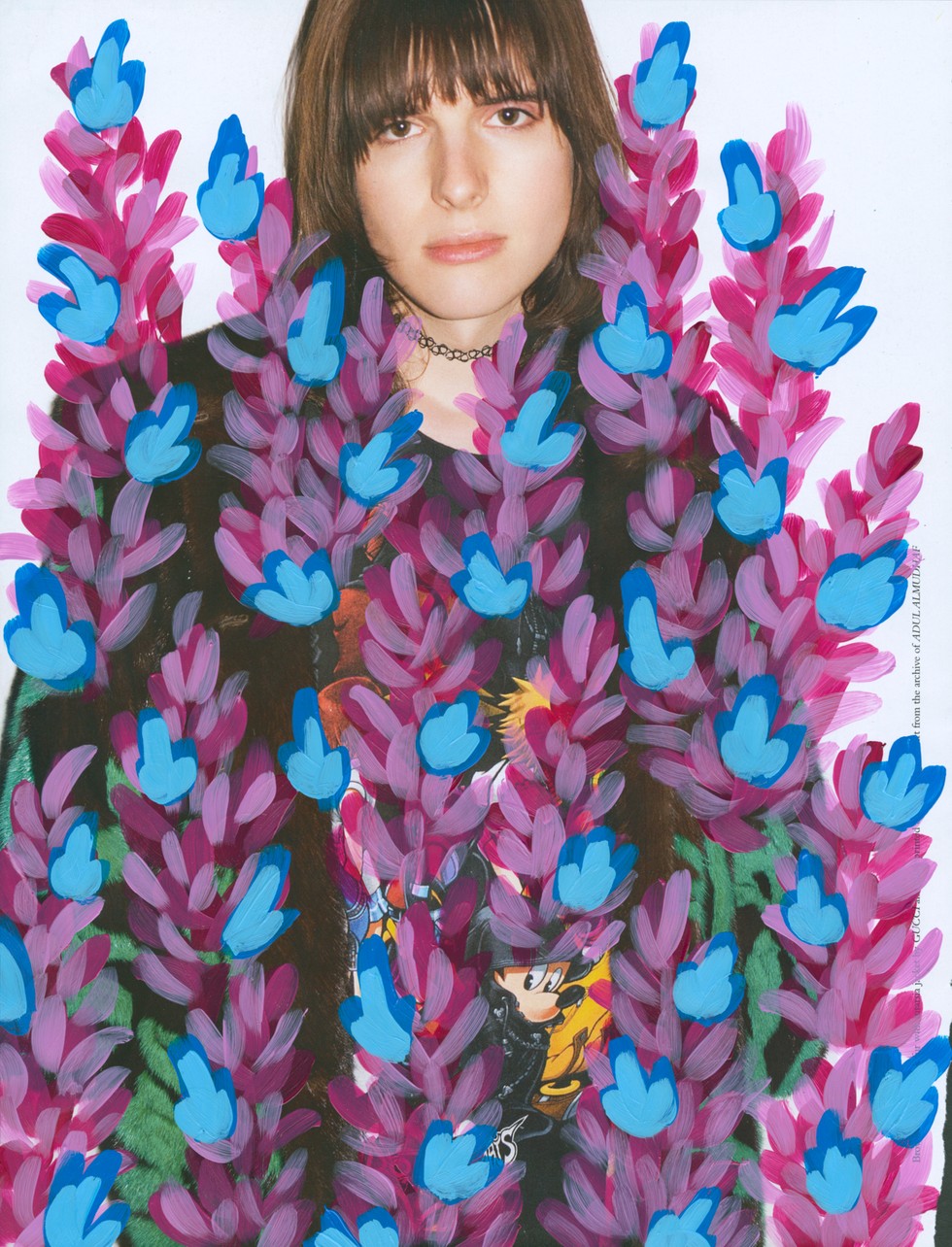 What else have you seen people do?

Walking up close and looking at it, which you never see people do. I've never seen anyone do that with an ad. Nobody walks up to the glass to get a closer look at Jennifer Lawrence's face. So I thought that was really interesting. Perhaps it's because some of these images are so familiar.


Why do you choose to work with media images in magazines and advertisements in bus shelters?

I feel like they're a part of our visual landscape and modern society. It's just everywhere and it's part of our every day. It seems like the natural thing to be incorporating into my work. Clearly I got into the advertisements as a medium rather by accident. But a lot of the things I've done in my career has kind of been that way. There's no grand plan like here's what I'm going to do and here's why I'm going to do it. I've just been experimenting and tweaking it as I go. What nourishes me is what I'm going to stay with.

What are you getting out of these?

Well first of all, I'm having a lot of fun. I like the contradiction of what's happening as a result of the work that I'm doing. I'm now working with a lot of the brands that I'm subverting. I like blurring that line of what's sanctioned, what's unsanctioned, what's public versus private. On the streets, I'm basically giving it away and sharing it. In the gallery, I'm not. You can go look at it, but if you wanted to own it you'd have to buy it. I've always found that street art was loaded with contradiction anyway.

What do you mean by that?

I think if you're going to use the streets to convey any sort of a message, then you are in some ways no different than the advertisers, because you're advertising yourself. Even if you don't put your name on it, you're putting your message out there. I like that contradiction. I think that's really interesting. Do I love that advertising is all over the streets in New York? I don't at all. I think it's really frustrating. There's way too much of it. They don't give you an opportunity to change the channel or turn the page. The ad is placed somewhere and you're forced to look at it. You can't walk down the streets with your eyes closed. You're forced to encounter this messaging, which is why I like Public Ad Campaign so much, because it allows people to change that and have a voice.

Is there a reason you gravitate toward fashion ads?

I like that there's a figure in the fashion ads. I don't think I've seen a fashion ad without a male or female model in it. I like the human element to it. They're done with so much craft. They are a fantasy world — they're not reality, whatsoever, and so many of them are so beautifully done. I'm attracted to the colors or the models or the patterns. It's an odd thing because I've never paid attention to any of this stuff before a year and a half ago.

What are you going to do when ads are all digital?

Yeah, they're replacing the paper ads with LCD screens. Doing the ads in the streets is just a part of what I'm doing. I'll come up with something else I suppose. The magazines have a lot of my attention right now.

What are your artistic influences? You're certainly not the first or last to work with magazine images. Robert Heineken comes to mind.

I'm influenced by a lot of different artists. Being here in New York, like everybody, I absorb so much and I go out and see so much. I always hate mentioning one or two artists because it doesn't really give the full breadth of what's influencing me. Sometimes in my work — and I don't think about it when I'm doing it, but many steps later — I'll see influences. Perhaps my color use is similar to something I saw in a Matisse painting. The emotional content of something is similar to something I saw somewhere else. It's kind of unavoidable, because you can't live in a bubble. I don't want to live in a bubble. I want to see everything. I want to taste everything. I want to smell everything. And I want to take it all in. I never know what I'm going to do honestly. The flowers have been a springboard into the process for me. These clearly aren't real plants. I don't even know what these are based on. They're not representative of any sort of actual horticultural, botanical.

So you don't take trips around the botanical garden for inspiration?

I do. Totally. I love it there. I'm a huge flower fan.

Do you have a favorite flower?

I've been into the ranunculus lately. They're beautiful. They almost look like a very tight peony. They've got like a zillion petals that overlap and slowly open.

The street art stuff I was doing, the flowers, was just this image. As far as flowers, for like 20 years, this was my tag, my image, my logo, so to speak. But in the past few years, I've been doing this stuff. It's looser. I've just totally fully embraced this as my creative output for now. I've just started using the technique of what a graffiti artist would do, which is to draw freehand flowers using graffiti tools. I kind of like that contradiction as well. I'm using something that more traditionally used for more aggressive, masculine types of imagery like tagging and stuff, and I'm doing cutesy flowers with them. I like turning things upside down like that.

Do you consider yourself a graffiti artist?

No, not at all. I don't consider myself a graffiti artist. I have nothing against graffiti. It's just not what I do.

So why are you called the Flower Guy?

It was given to me. Maybe people know that name more than my actual name, but I've always used my real name. In the early '90s when my friends would introduce me to their friends, they'd say, 'Have you seen these flowers all over town? This is the guy.' And they'd say, 'Oh, so you're the Flower Guy.' And it just stuck. That's literally how it came about. People just started calling me the Flower Guy.

All images courtesy of Michael De Feo and Danziger Gallery.

This interview has been edited and condensed.