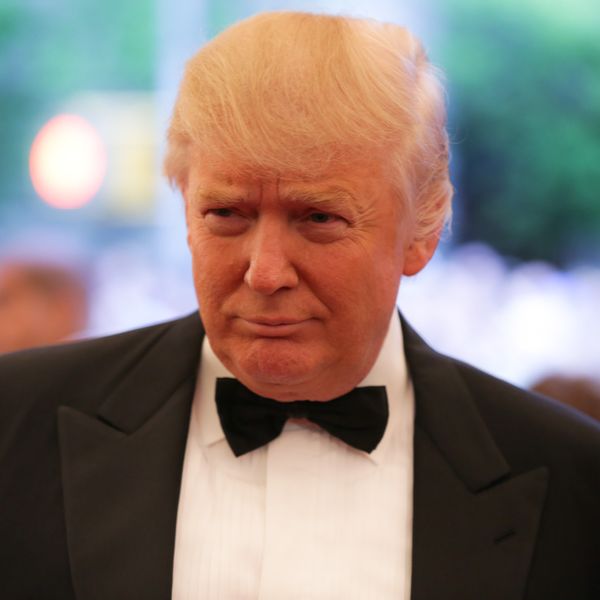 Michael Cohen's testimony before the House Oversight Committee was full of Bravo-level gossip about Donald Trump's mob-like past that was as un-shocking as it would have been darkly entertaining, were he not the president.

Among the testimony's insane-not-insane moments was an anecdote Cohen shared in which Trump dropped $60,000 of Trump Foundation donations on a flattering, nine-foot tall impressionist vanity portrait of himself.

According to CNN, in 2013 Trump enlisted pharmaceutical billionaire Stewart Rahr as a proxy bidder to help raise the price of his portrait. "The objective was to ensure that his portrait, which was going to be auctioned last, would go for the highest price of any portrait that afternoon," Cohen explained.

Obviously, Trump headed straight for Twitter to brag about how much his portrait went for, failing to mention that he was the one who paid that figure.

Just found out that at a charity auction of celebrity portraits in E. Hampton, my portrait by artist William Quigley topped list at $60K
— Donald J. Trump (@Donald J. Trump)1373985895.0

This unrepentant act of ego-maniacal narcissism should be damning, but it's obviously nothing out of the wheelhouse of batshit things that Trump has done to inflate his image. It's not even fresh news, and was actually reported in local papers at the time. The story's sticking point is that, according to Cohen's testimony, Trump personally reimbursed Rahar, providing him with a check that drew from the Trump Foundation's accounts.

"Mr. Trump directed the Trump Foundation, which is supposed to be a charitable organization, to repay the fake bidder, despite keeping the art for himself," Cohen testified.

Cohen's tea is from the first public knowledge of Trump using his foundation as his piggy bank. The Trump Foundation was dissolved under judicial supervision in 2018, the New York Times reports, after an investigation and lawsuit by the New York attorney generals office, which accused it of "functioning as little more than a checkbook to serve Mr. Trump's business and political interests." Trump reportedly used the foundation to pay for giveaways at his campaign rallies and to donate to political candidates. He even once made a $7 donation to the Boy Scouts: suspiciously the amount required to enroll a child in the program, the same year Donald Trump Jr. was 11.

Created by celebrity portraitist William Quigley, the painting is... a vision. Which is to say it looks like something you could buy on the sidewalk in Central Park. Unfortunately, now it will one day be worth even more than $60,000. Today, it still hangs in a Trump country club.