Michael Arceneaux On Why He Can't Date Jesus

I fervently believe Michael Arceneaux's new book should replace the Gideon Bible in every hotel room across America. His debut collection of essays, I Can't Date Jesus: Love, Sex, Family, Race, and Other Reasons I've Put My Faith in Beyoncé (Atria/Simon & Schuster), chronicles his upbringing in Beyoncé's hometown (formerly known as Houston, Texas) at the intersection of being queer, Black, and raised in a religious household.

Arceneaux's ability to effortlessly oscillate between the hysterical and illuminating, yielding a soul-searching body of work that offers a refreshing perspective at minority life in America today, is why he's my new personal Jesus. And I'm not the only one proclaiming "amen" after reading his book; he's garnered praise from other holy figures like Roxane Gay, Samantha Irby, Lena Waithe, Janet Mock and... why are you still reading this? Go buy his book now!

I'm honored to have sat down with the author and speaker to discuss the role faith has played (or rather, hasn't) in shaping the writer he is today, why Beyoncé is worthy of worship, how he's carved his space as a queer Black man in media today, and more, below. 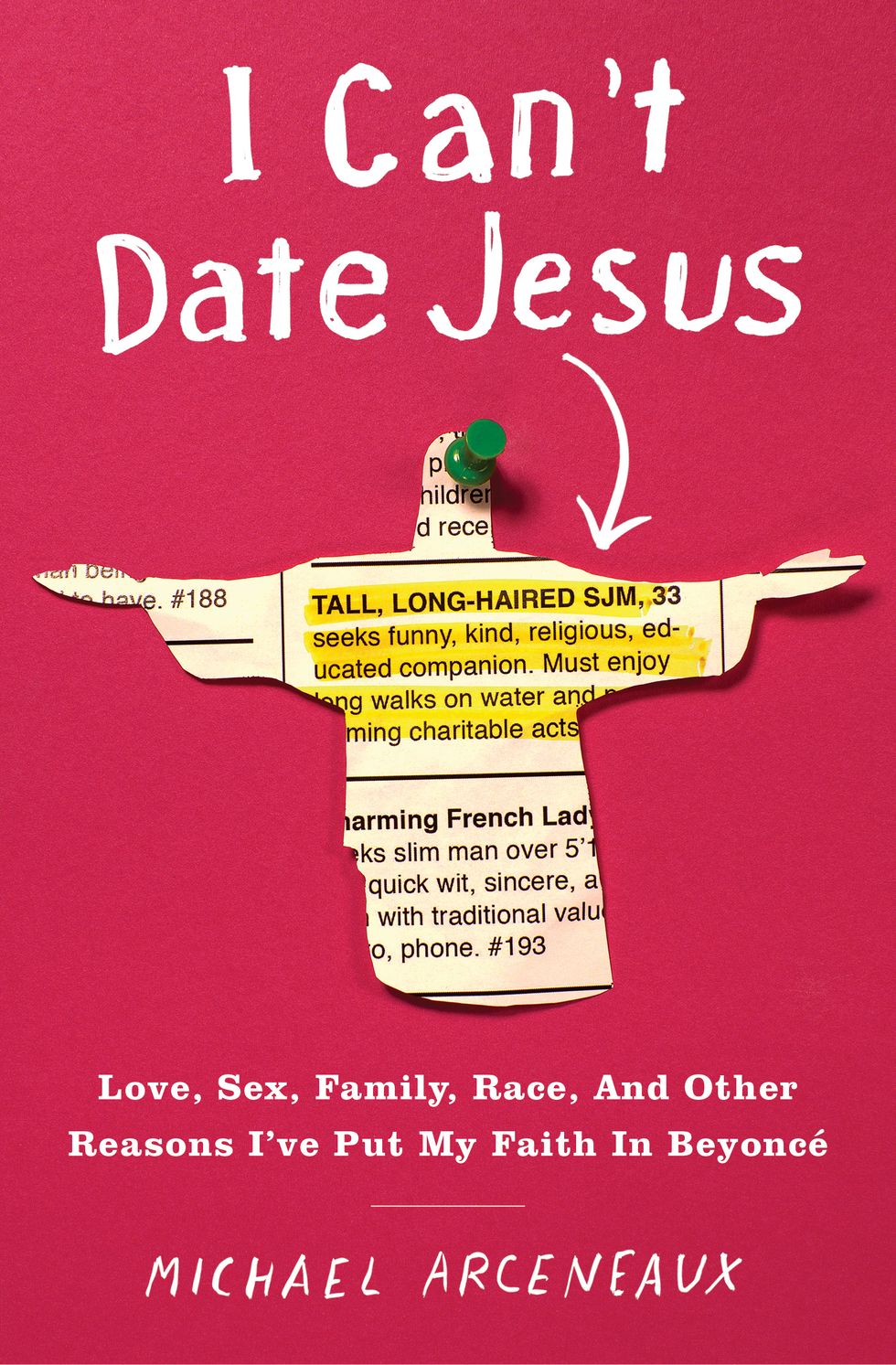 Why is Jesus off limits?

One of the most remarkable things about religion to me is that it can make intelligent people suspend their better senses. There are so many Christians who absolutely know that you are born gay. They know we can't help our feelings and urges yet they want us to suspend them solely because a book that begins with a tale about a scammer ass snake conning a woman to eat some forbidden fruit effectively derailed the path for humanity set forth by God said so. They act like allegory and metaphor don't exist; they purposely choose to ignore the notion that perhaps many of these words like abomination have meanings that have changed over time. Reason no longer applies, so we are encouraged to effectively lead a life devoid of pleasure because we have to make sure we are on the VIP list for heaven.

I try to be respectful of people's beliefs, but it's dumb and dangerous. To be fair, there are more reasonable Christians who pushback on this common belief that being gay is an affront to Jesus. Unfortunately, I didn't know them growing up, so I was suppressing what was innate for the big maybe that one day I'll get to share a mango mojito with Aaliyah in heaven. And as I write in the book, to this day, I have been told that's the way to live. Nah. Jesus may be a good lay for some, spiritually speaking, but he can't satisfy me in the other ways any human being with sexual urges deserves.

"Jesus may be a good lay for some, spiritually speaking, but he can't satisfy me in the other ways any human being with sexual urges deserves."

I want to talk about the role faith has played — or rather, hasn't played — in shaping the prolific writer and pop cultural commentator I'm speaking to now. What is one thing you're thankful for in regards to how faith affected you growing up?

A lot of my childhood is met with volatility. That said, my mom is the strongest person I know and I know that her faith is largely the source of that. When it came to what happened in our home, the faith she raised me in was helpful because it gave me hope that somehow, someway it would get better — eventually. Some of us learn sooner than others how vital it is to have something to believe in. For that reason alone, I will always have a respect for the purpose of religion. I just wish the religion I was raised in was truly more accepting of queer people.

When was the exact moment your love of Beyoncé transcended from die-hard fan to someone worthy of your worship?

I was immediately drawn to Beyoncé from the very beginning, but by the time the "Bills Bills Bills" video dropped, I just knew she was gonna be that girl. I love her for so many reasons, though, but you know, I don't literally think of her as my new Jesus. Having said that, Jesus never gave me "Kitty Kat" so...

"I will always have a respect for the purpose of religion. I just wish the religion I was raised in was truly more accepting of queer people."

You mention the barbershop as a sanctuary for (straight) Black men. Have you found a space where you feel seen in the same totality, and, if so, where?

As a writer I know what it's like to lay yourself bare in front of the world. How do you get past that veil of trepidation and write with unfettered vulnerability like you do in this book?

Well, for transparency's sake, while I am forthright about most of what happened, I didn't tell everything because it isn't my place to give away everyone else's story. I said what was necessary in order to add proper context when describing events that happened to me. I tried to be as respectful as possible — especially because I was raised to "not tell my business." I clearly do not believe in that, but I really tried to be cognizant of the reality that there is only so much of someone else's story I should share. I don't know if I got it totally right, but I really tried to be respectful.

You mention that female recording artists provided you with real sex ed, even though growing up your mother has always been open and honest about how babies were made. What truths did these female pop cultural icons unearth for you concerning sex?

Pop culture was my access point for discovering much of the unknown and sex was another aspect of that. For one, female artists, particularly female rappers, talked about men in ways I could relate to given I have an innate attraction to men. That said, as I write in the book, an artist like Janet Jackson talked about sex in both her music and interviews that I just found incredibly helpful. She made me realize I wasn't alone in having these urges even as a kid. She made me see that sex was natural, vital, and could be even more beautiful when it came with a particular type of connection. I'm not sure if she would consider herself to be a late bloomer, but the janet. album was released in her late twenties; I was too young to totally get everything, but as I got older, so much of it made sense, and for that, I am forever grateful.

"[Janet Jackson] made me see that sex was natural, vital, and could be even more beautiful when it came with a particular type of connection."

You used to never think, "This could be me," when it came to marriage. Has your attitude shifted?

It has changed in that I am very open to one day becoming a divorcee and that was not the case years ago. I didn't grow up with an idealistic view of marriage or any declared partnership. Watching two people you know that would likely be better off without a marriage certificate or even a family really makes you question how much you want to devote to someone. I have since learned to looking like other folks' problems and assume it's contagious.

As a gay Black man working in an industry that's predominantly white, how do you honor and protect your narrative from being edited into a trope or some form of clickbait?

You argue with small-minded people all the damn time to the point in which you regret not going to law school. Rinse, repeat.

"I want to create culture rather than just constantly critique it."

Your book is finally out in the world. What's next for Michael Arceneaux?

I want to create culture rather than just constantly critique it. That's not a diss to those whose dream is solely to serve as a cultural critic; I think it's necessary and important, but it's not necessarily my greatest talent. I want to write more books — I already am working on another — but I am hoping that I Can't Date Jesus gets to live off of the page. There is no queer Black male led and centered show. I want to create one and I think my book is a great basis for that. I also want to live more off the page in general. I was a broadcast journalism major in college and sort of fell into full-time writing. I may not get to be Katie Couric with a dick as I initially envisioned, but I want to offer my perspective in more accessible ways. I love being on-air. I'm probably my happiest when on there. See any of my appearances on Desus & Mero. Like, no matter what is going on in my life, when I get the opportunity to present myself in that medium, I'm very happy.

Writing is lonely and hard, particularly in this climate and in this economy. When you know you should be doing more, it eats at you. This book has thus far been my biggest opportunity to present my total self to the world. I hope it leads me to more ways to do so.

I Can't Date Jesus: Love, Sex, Family, Race, and Other Reasons I've Put My Faith in Beyoncé is out now.