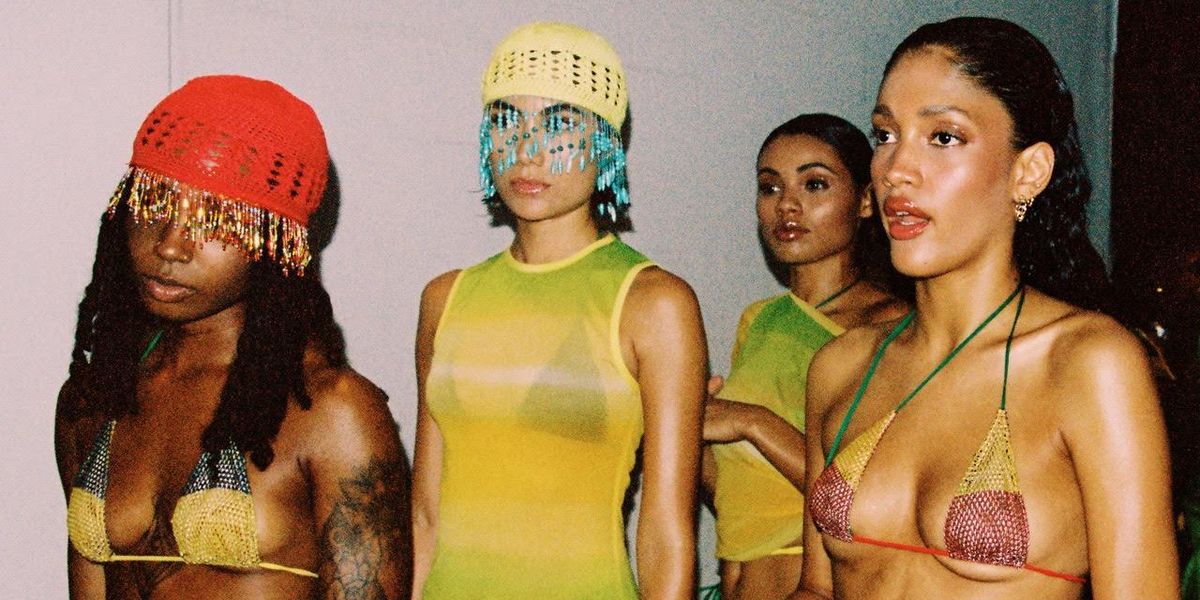 For editors, writers, influencers and stressed-out interns alike, Miami Swim Week 2021 ushered in a much-needed sense of normalcy (or whatever that means) in fashion. The lavish affair, largely orchestrated by Paraiso Miami Beach, was one of the first in-person fashion events in the US since the virus put a halt to organized runway shows.

It's important to note that despite the weekend's utopian runways and regal presentations, we aren't in the clear yet. COVID remains a looming threat, along with the Delta variant. Cases have steadily risen since inadequate state governments have given the green light to abandon all rules this summer — especially in Florida.

But this is fashion, of course. And as they say, the show must go on.

As the world turns towards a post-pandemic season filled with itty-bitty G-strings and luxurious vacations sailing the Saint Barths seas (or your local community pool infested with screaming children) fashion's juggernauts have collectively decided that swimwear is an essential component of what it means to be alive.

Both young brands and established labels presented collections made for the consumer grappling with vacation FOMO. If this year's swimwear trends are any indication, the world is ready to shed off the oversized hoodies and matching masks that have become our daily uniforms. Bring in the sarongs and platform flip-flops: there are enough to go around.

Resort wear, much like swimwear, concentrated heavily around liberating the female form. Free-flowing dresses and puffy-sleeved linen blouses are meant for the practical, graceful woman. Garments are much more toned-down and tasteful, a sign of the times we're living in.

Los Angeles-based designer Jonathan Simkhai, known for being one of the go-to labels for First Lady Dr. Jill Biden, is a swimwear veteran at this point. Although he debuted beachwear in 2016, it's his first in-person introduction since founding the label.

"As we were still in the pandemic in the beginning stages of the design process, my mind was very much drawn to faraway, beautiful places," Simkhai told PAPER about his Resort 2022 collection. "This manifested in the use of prints that mimic the shapes of natural, coastal landscapes. The color palette is imagined from the lush palms, ferns, bright sky, and warm rocks."

Escapism was at the forefront of most major designers' minds, having migrated from bustling New York and Paris to stage intimate presentations for the laid-back Miami crowd. The weather was hot, the mojitos were flowing, and the vibes were immaculate. It's the only thing we can hope for at this point, with social media feeds often acting as a transportation method to a lush, tropical oasis.

Many designers pivoted to swimwear to mark the end (or the beginning?) of the world as we know it. The first half of 2021 brought the arrival of labels transitioning to vacation-ready garments with brands like Adam Selman tapping into feminine sex appeal when launching his collection of G-string fronted designs. Brooklyn-based designer LaQuan Smith also translated his signature black and white strappy aesthetic to a beach-friendly line just last month.

Crochet bikinis and slinky mesh pants in black, yellow, red and green molded the collection into something more personal. It's not unlike Thompson to create a community that far outlives his physical body of work.

"It makes so much sense, why not come out with a swimwear line?" the designer told PAPER. "I've had so much support from my consumers because they see the growth and the story. It's a book. Each collection is a chapter. They all live together."

While fashion has historically been in the clutches of thin, wealthy patrons, this year's Swim Week has begun to challenge the idea of who beachwear is made for — that is to say, it's for everyone. Like much of Thompson's work, the space in which the young Black queer designer takes up is out of celebration.

"We exist in these spaces and we deserve to be seen and heard, and that's what we accomplished," he explained.

Thompson's showcase at the first annual Sounds & Swim event hosted by Studio Swish and Create Your Mood Entertainment was one of the few Black-focused curations of the weekend. Paraiso's Bfyne Swimwear presentation in conjunction with Models of Color Matter also elevated Black Women of all shapes and sizes, a necessary inclusion to the traditional models often dominating major swimwear campaigns.

Cymber Larkin, a muse of Theophilio and co-organizer of Sounds & Swim alongside Will Howell, walked in swim week events in the past, noting the direct capitalization of Black aesthetics without making way for young Black creatives as well. Both Larkin and Howell agreed that Black swimwear is underrepresented altogether.

"They never highlight one specific brand in any show, it's always a showcase of many brands or the typical Miami swim brands and I wanted to bring a new designer to the market," she explained in a call to PAPER. "The fact that tons of shows have whole crews without Black makeup artists or stage managers, I was like, this is what I'm talking about. That's why I wanted to do this."

It's a reminder that while many preach that we must do better, quite frankly, people like Larkin, Howell, and Thompson already have. Australian label Honey Birdette's lingerie and swim show, headed by queer Creative Director Eloise Monaghan, sent drag queens Aquaria and Violet Chachki down the runway, while trans supermodel Carmen Carrera showed the girls how it's done in erotic-inspired, bondage-esque swim separates.

PrettyLittleThing's Thursday night show included casting from those typically left out of the conversation. Plus size, disabled, and trans models and influencers alike made their way down a water-filled runway alongside surprise performer Swae Lee.

The growing e-commerce label wasn't the only fast-fashion brand to show at swim week, as UK-based Boohoo and UK label Oh Polly's Neena Swim also made a splash. The former's presentations made headlines this week, both for the abundance of TikTok stars like Suede Brooks and Olivia Ponton walking the runway and for its venue, the Versace Mansion located steps away from Miami Beach. (Would Gianni be proud to see Nikita Dragon show off her assets in an ombre blue one-piece and clear platform heels? Well, he did always love a girl with a lot of personality.)

At its best, Miami Swim Week was a perfect hedonic journey into a world that could have been hadn't the perils of the outside world slowly make their way back into the conversation. But it was also a timely vehicle for new voices to be heard amid broader beauty ideas of what swimwear can and should include.