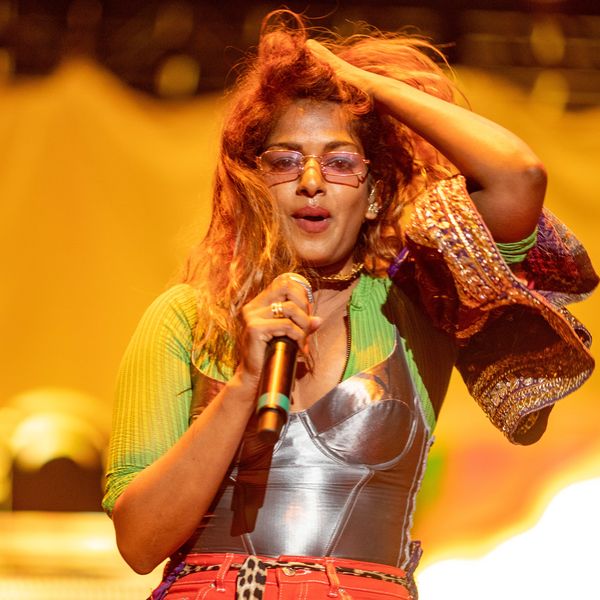 Rapper M.I.A., also known as Matangi Arulpragasam, has been named a Member of the Most Excellent Order of the British Empire (MBE) as part of Queen Elizabeth II's annual Birthday Honours. As the BBC reports, the Birthday Honours are given to a number of British citizens who have been recognized for their service to the arts, medicine, philanthropy, as well as other sectors. M.I.A. is being recognized for her "services to music."

In a post to Instagram, the British rapper dedicates the award to her mother. "I'm honoured to have this honour, as it means alot to my Mother. I want to honour what my mum spent many hours of her life doing!" She continued by telling the story of her mother's immigrant narrative, and how her mom was in fact one of the women who hand-stitched medals for Her Royal Highness the Queen of England.

"She is one of the 2 women in England who hand stitched these medals for the last 30 years. After receiving asylum my mum and cousin took this job in 1986, because it was the only non English speaking manual labour she could find," she explained. "She spent her life in England hand sewing 1000s of medals for the Queen. No matter how I feel or what I think , my Mother was extremely proud of the job she had. It's a very unique situation for me where I get to honour her most classiest minimum wage job ever. "

MIA on Instagram: “I'm honoured to have this honour, as it means alot to my Mother. I want to honour what my mum spent many hours of her life doing! She is…”

M.I.A. last album AIM was released in 2016, but last year she also released the video for her single "Reload." The song also appeared on the soundtrack to her documentary MATANGI / MAYA / M.I.A., which documents the independent artist's journey from refugee immigrant to rap star.

Another honoree for music this year is musician Elvis Costello, who named an Officer of the Order of the British Empire (OBE). The singer-songwriter wrote in a blog post that he was surprised to have been given the honor, especially since some of his music has jabbed at Britain's political establishment. "To be honest, I'm pretty tickled to receive this acknowledgment for my 'Services To Music,' as it confirms my long-held suspicion nobody really listens to the words in songs or the outcome might have been somewhat different," he wrote.

Costello also took this as a chance to throw some shade at US president Donald Trump in the very last paragraph of his statement:

It would be a lie to pretend that I was brought up to have a great sense of loyalty to the Crown, let alone notions of Empire. I used to think a change might come but when one considers the kind of mediocre entrepreneur who might be foisted upon us as a President, it's enough to make the most hard-hearted "Republican" long for an ermine stole, a sceptre and an orb.