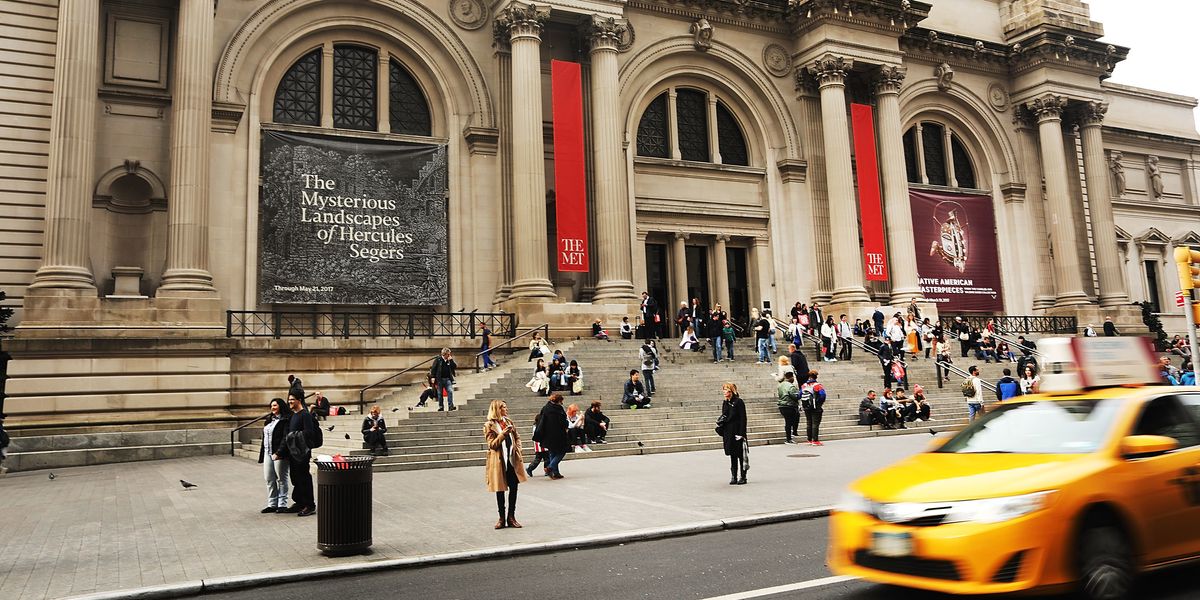 One Group's Mission to Halt the Met's New Pricing Model

Aside from its 5,000 years worth of art, maze-like structure and iconic place in New York City history, the Metropolitan Museum of Art is known for one thing — its pay-as-you-wish admissions policy. Earlier this year, the institution announced a huge change to that system, under which visitors were previously free to pay as much or as little for a ticket as they liked (with a suggested donation of $25 per person). Starting March 1, the museum began charging visitors from outside New York State the full $25 per person (for adults), with visitors being asked to show verification of their NYC residency if necessary.

The museum said that under the suggestion model, only 17% of people who visited in 2017 paid the full $25, marking a steep decline. Museum president and CEO Daniel Weiss said in a statement that the Met is "determined that the Museum will remain accessible to as many visitors as possible while it also thrives as a financially stable institution." While some art world insiders critiqued the new policy, especially in light of increased policing of immigrants and the problematic nature of asking people to prove their residence, the Upper East Side art mecca transitioned into its new pricing model with relatively little fanfare.

One group, though, is currently campaigning for a sliding scale policy in place of the Met's new model. Called Towards Equitable Met Ticketing, the collaboration between equitable e-commerce plug-in Gradient and socially engaged art program Look at Art. Get Paid. has created a proposal for the museum to charge visitors based on their income rather than residence. We spoke with creators of the initiative JS Tan, Josephine Devanbu, Kevin Wiesner and Lukas Bentel about why they believe their proposal is better than the Met's new plan to increase revenue:

Why do you think the Met's new pricing policy is a bad move?

A flat $25 admission fee will cut off communities that the Met seeks to serve — especially marginalized and low-income out-of-state visitors and undocumented individuals.

The Met was founded by affluent, white businessmen, financiers and artists. Its development cannot be separated from "white supremacy, hetero-patriarchy, abuse of labor, colonization, imperialist theft of art and artifacts," and the imposition of western-centric narratives of art and its history.

For the Met to achieve excellence meaningfully and expand its relevance beyond its affluent white donor base, it needs the perspectives of visitors whose experiences are not typically centered by the Met — visitors who must pay additional unaccounted costs in order to enter its space.

The Met's pay-what-you-wish policy opened up a stakeholder base that could hold it accountable to making critical changes.

If these visitors had to pay $25 to enter, what visionaries might the Met have lost?

This depends on how one defines "hurt," which comes down to one's values. At a certain level, you could say that it most directly hurts low-income out of state visitors who were on the edge about coming to the Met and will no longer make the trip under the new policy. The tricky thing is that this centers the universality of the value of the experience of visiting the Met, which is problematic since the Met is a historically white institution whose values reflect those of its affluent, largely white, founders and donors.

A visitor who would have gone to the Met may now choose to do something else with those hours, something that might be equally meaningful and culturally significant.

Similarly, a consideration of who "benefits" requires a values assessment. From a short-term, purely financial standpoint, the new policy can be seen as a sound management decision that will benefit the Met's financial health by helping to balance its budget.

In contrast, if we assess the health of an institution by its fulfillment of its mission, the new policy hurts the Met. To fulfill its commitment to "reach the widest possible audience in a spirit of inclusiveness," the Museum needs the time, insight, and labor of visitors this new policy will cut off.

What do you propose instead?

We are proposing sliding scale ticket prices from $0-35 based on each visitor's income, applied to all visitors both in-state and out. As we have framed this scale in Towards Equitable Met Ticketing our scale is recommended only* — requiring visitors to verify their income would be a massive invasion of privacy, as well as logistically untenable.

Under this pricing scheme (rough calculations and assumptions detailed here) we find that the Met can meet their revenue increase goals, while keeping suggested ticket prices less than $25 for the large majority of all visitors.

*Note: we fully expect that visitors will be inaccurate or untruthful in complying with a recommended scale, and our preliminary modeling accounts for this, assuming people will be truthful at about the same rate they were under the Met's previous pay-what-you-wish policy.

How can you enforce a sliding scale based on income?

I think what this question is really asking is what this would look like in practice, since any interaction that brings up a person's finances can be uncomfortable. Currently, the Met has a plethora of digital ticket kiosks in its lobby, which are a good opportunity to both implement a more complex pricing scheme and allow people to choose ticket prices without having to nominally disclose their income to another person.

It's worth noting that these income conversations can be more normalized. For example, Italian residents have an ISEE (Indicatore della situazione economica equivalente) number — a sort of amalgamated income+wealth score — which has multiple applications to determine university tuition or welfare. Equitable systems like sliding scale pricing ideally do not want to call attention to themselves. We would like to see sliding scale simply as infrastructure, as opposed to charity or donation that relies on exception-to-the-rule altruistic impulses.

Who is the team behind Towards Equitable Met Ticketing, and what are the group's plans going forward? Have you been in contact with the Met?

Towards Equitable Met Ticketing is a proposal by Gradient and Look at Art. Get Paid. Gradient is developing an e-commerce plug-in to make online purchasing more equitable using sliding scale checkout to lower prices for those who need it. LAAGP is a socially engaged art program that pays people who wouldn't normally visit art museums to attend one as guest critics.

While we have sent Towards Equitable Met Ticketing to individual contacts at the Met we have not spoken with them in a formal capacity. We hope that as we continue to share this campaign widely and have people sign in support of this proposal we can demonstrate to the Met and other museums or cultural institutions that there is a desire for this kind of equitable pricing structure.

Gradient's goal is to make sliding scale a viable way to transact online to promote accessibility. Gradient began at New Inc, and is supported by A Blade Of Grass. Currently, the product is in development, but we want to start getting folks thinking about sliding scale as a viable implementation of consumer equity.