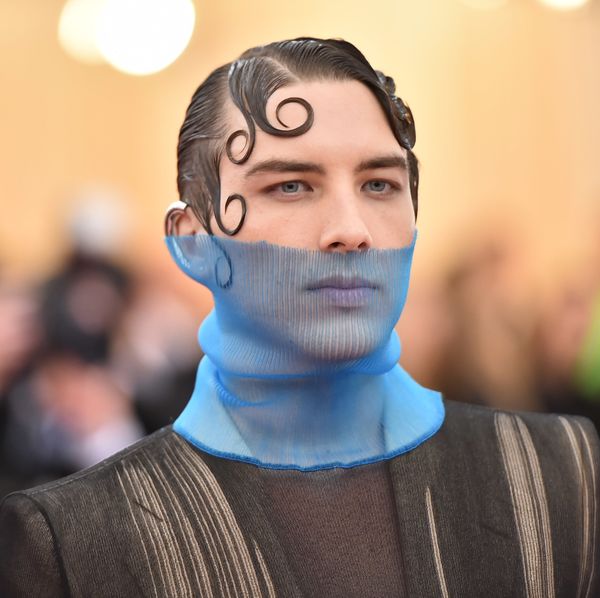 Men Who Ruled the Met Gala

Masculinity (nor heterosexuality) is an excuse to ignore The Theme! Despite gala being a celebration of "camp," some guys really had the nerve to show up in tasteful, tailored suits. Looking at you Shawn Mendes. Did Taron Egerton learn nothing from playing Elton John in Rocketman?

While some men rested on their good looks, others got out of bed and actually got dressed for the Met Gala. Here are a few of our favorites.

The Jonas guys did well for themselves. Even though Nick and Joe obviously should have showed up in Vans and Target denim for a "Camp" Rock look (they apparently didn't catch this meme till after), there was a lot to love. Joe served a wonderfully gauche '80s jazz-club Louis Vuitton by Nicolas Ghesquière turtleneck (brow game on point, as ever), matched to his wife Sophie Turner's art deco jumpsuit. Congratulations to them on their one-week anniversary, by the way!

Meanwhile, Nick served cheeky Wes Anderson-Louis XIV (to match Priyanka's queen of hearts) in glittery silver Christian Louboutin heels and a Dior double-breasted suit with a butler sash. Bonus points for the diamond ear-cuff, rings and 38.30-carat diamond watch: proof you can look goofy and dashing at the same time.

Billy Porter is Camp sitting at home in his underwear watching Netflix and eating Cheerios, but he still brought beaded drama and (wingspan) inches. He dismounted from a throne carried by six shirtless Broadway actors, to reveal beaded golden snitch wings, an embroidered catsuit and 24-karat gold headpiece by The Blonds. Queen Porter's look was obviously inspired by Egyptian iconography, specifically the Sun God, but it also pays homage to a Diana Ross' deep cut. He pulled an extra layer of Camp from one of Ross's looks in 1975 film Mahogany, where she plays a "struggling Chicago fashion design student." No surprises here, especially after his earthquaking velvet Christian Siriano Oscars gown, but Porter continues to show everyone how it's done.

Pose, Glee and American Horror Story creator Ryan Murphy knows something about Camp. He paid homage to Liberace with his Christian Siriano peach sequin tux and 100-pound, pearl-dripping cape: a direct reference to one of the entertainer's costumes called "The Neptune," according to People. Just as Liberace intended, the 'fit was also laced with just a hint of "The Birth of Venus" (who wore it better, Murphy, Liberace or Cardi?). We would have loved to see a bold lip with the monochrome look, but Murphy still did his part.

As Miranda Priestly would say, "thank god somebody came to work today." Keiyan Lonsdale, the 27-year-old Australian The Flash and Divergent star, was one of the many first-timers to make waves last night. He made his Met debut as a butterfly prince, sporting neon pink hair, and a highlighter yellow turtleneck under a Manish Aurora gown featuring 1,500 hand-embroidered butterflies that glow in the UV light, reports Just Jared. 1,5000? 1,5000. Liam... take note!

After obliterating us with his head-to-toe goth Maison Margiela look at the Golden Globes, Australian actor Cody Fern was generous enough to slam our fingers in a door with more Margiela menswear greatness (styled by Nicola Formichetti). He was transformed into a devastating Fabio-esque cowboy in a camel suit designed by John Galliano camel suit, featuring a black tule overlay, gloves and blue sheer turtleneck piece. The look might have erred on tasteful, but Fern ensured Camp with turquoise cowboy boots and dramatic gelled ringlets.

I'll be honest, Harry's look was a challenge for me. We'd been speculating about what the youngest Gala co-host in history would wear for weeks, and hoped he'd give just a little bit more, upfront. But as I realized upon further inspection, Harry's look was a quiet, New Romantic Gucci masterpiece that kept on giving the more you looked at it. It just took a little time to take in the absurdity of the onesie-shape his sartorial trousers, the humor of the boyband tattoos under his sheer frilled blouse, the whimsy of his flopping pirate sleeves. Next to Alessandro Michele's pink fantasia, it was a little hard to digest, but please, take the time now to savor it.