The Met Gala last night was host to a number of interpretations of "Camp." While some attendees like Kate Moss and Harry Styles preferred a sophisticated take on the theme, there were others — hello Lady Gaga and Billy Porter! — who took things to another level.

While the outfits themselves may be hard to recreate (Kim Kardashian's custom Mugler look reportedly took eight months to create), makeup and hair were big contributors to crafting the camp effect.

PAPER spoke to the makeup artists behind the scenes, who broke down every product used to create the most spectacular beauty looks of the night:

Cardi B (by Erika La Pearl) 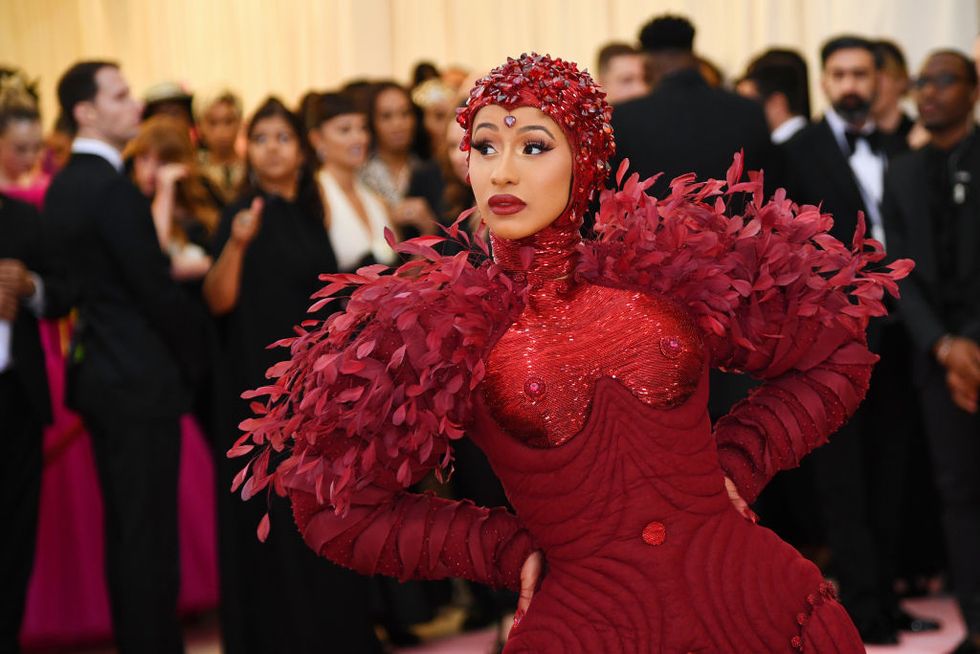 For the skin: For most part, La Pearl chose to keep Cardi's skin simple, keeping the focus on her eyes and lips. After perfecting her base, the makeup artist used the Skin Fetish: Highlighter + Balm Duo in the shade Golden for an added glow.

For the lips: La Pearl first prepped Cardi's lips with the Lip Fetish: Lip Balm in Clear, followed by the Perma Gel Ultra Glide Pencil in Manhattan. The artist also teamed up with Pat McGrath to create a custom blended lip color using MatteTrance for the big night. This was then topped with the Mcgrath's lipsticks in the shades of Guinevere and Vendetta. 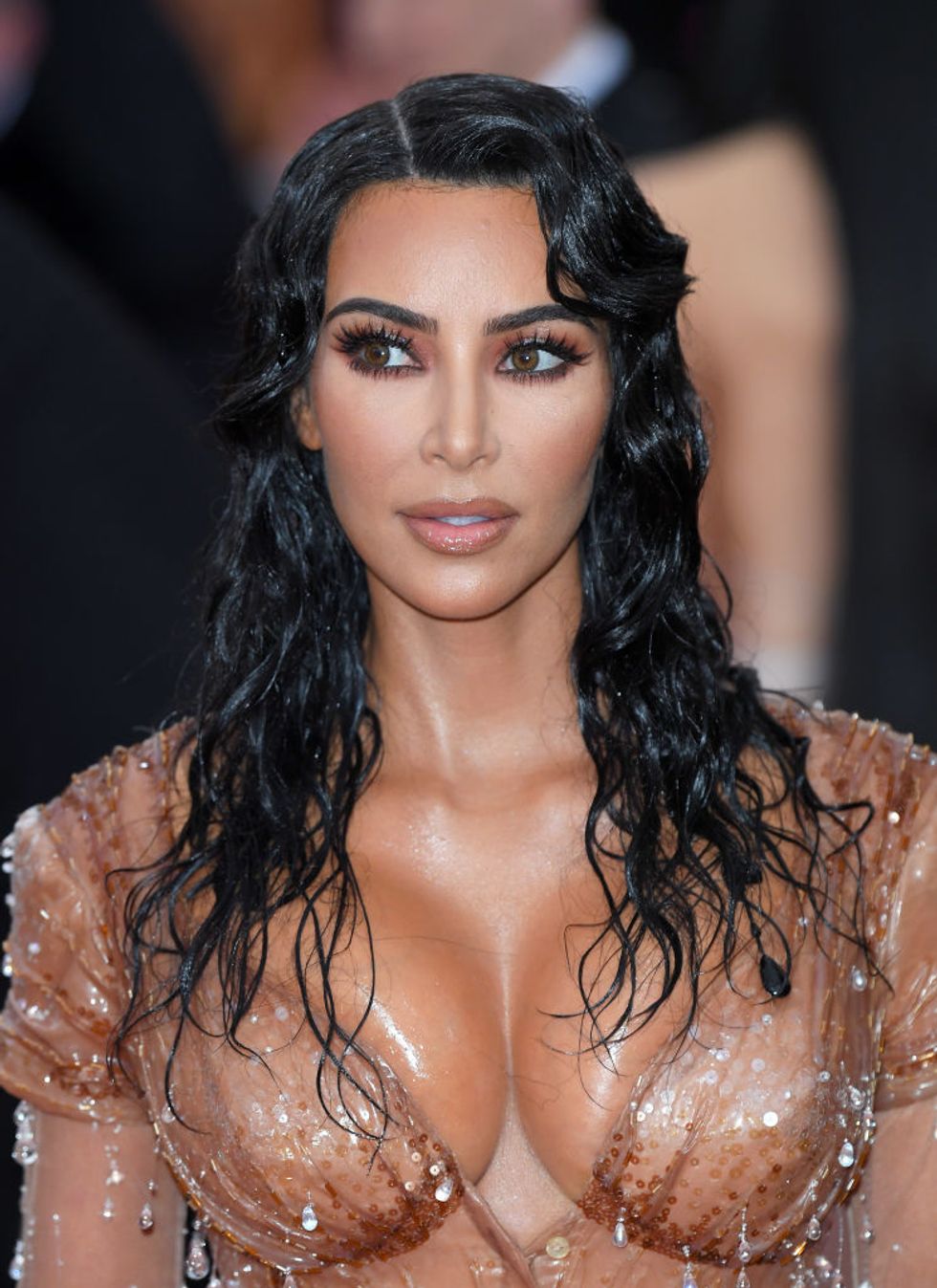 "[Kim is] a California girl, stepping out of the ocean onto the pink carpet of the Met Gala. She emerges from the water, revealing her body dripping in crystals. She is CAMP by day," celebrity makeup artist Mario Dedivanovic told PAPER about Kardashian's look. Here's Dedivanovic's step-by-step guide to the look:

For the eyes: For Kim's eyes, I wanted to mimic the reflection of light glistening off of a body of water. I layered both Albanian and Bronzy from the KKW Beauty X Mario Palette on the eyelids. I then buffed the lower lash line using Albanian. I highlighted the brow bone with a mix of 2008 and Armenian. To give the glistening effect in the middle of the eyelid, I added a highlight of Ultra Lightbeams in Iridescent. To finish off the eyes, I customized the lashes using individuals and small pieces of strips.

For the skin: Kim and I decided to go for a fresh, dewy complexion. Before starting glam, I cleansed Kim's face using the TATCHA Classic Rice Polish Foaming Enzyme Powder. I then placed TATCHA's Luminous Deep Hydration Lifting Mask on her face for ten minutes to restore firmness and luminosity. Lastly, I pat a few pumps of TATCHA's Violet-C Brightening Serum into the skin to lock in moisture.

Prior to foundation and concealer application, I took a small amount (about the size of a dime) of TATCHA's The Silk Canvas Primer and applied to Kim's forehead, chin and cheeks. After, I applied a generous amount of TATCHA's The Dewy Skin Cream to the full face, neck and décolletage. For Kim's face, we started by using the KKW Beauty Concealer Kit in Shade 7 and set the concealer using the Baking Powder in shade Bake 2. For added radiance, I finished off by using a clean fluffy brush to apply the Brightening Powder in shade Brightening 2. I then contoured her cheekbones, forehead and jawline with the KKW Beauty Creme Contour Sticks in Medium II and Dark I.

To keep the skin glowing, I added a touch of Ultra Lightbeams in Iridescent to the cheekbones and cupid's bow. I also brought the glow down to her hands, legs and décolletage. Right before Kim stepped out I gave her one final spritz of TATCHA's Luminous Dewy Skin Mist to seal the skin and leave her with a radiant complexion. I also snuck one pack of TATCHA's Original Aburatorigami Japanese Blotting Papers into her bag to touch up throughout the night! 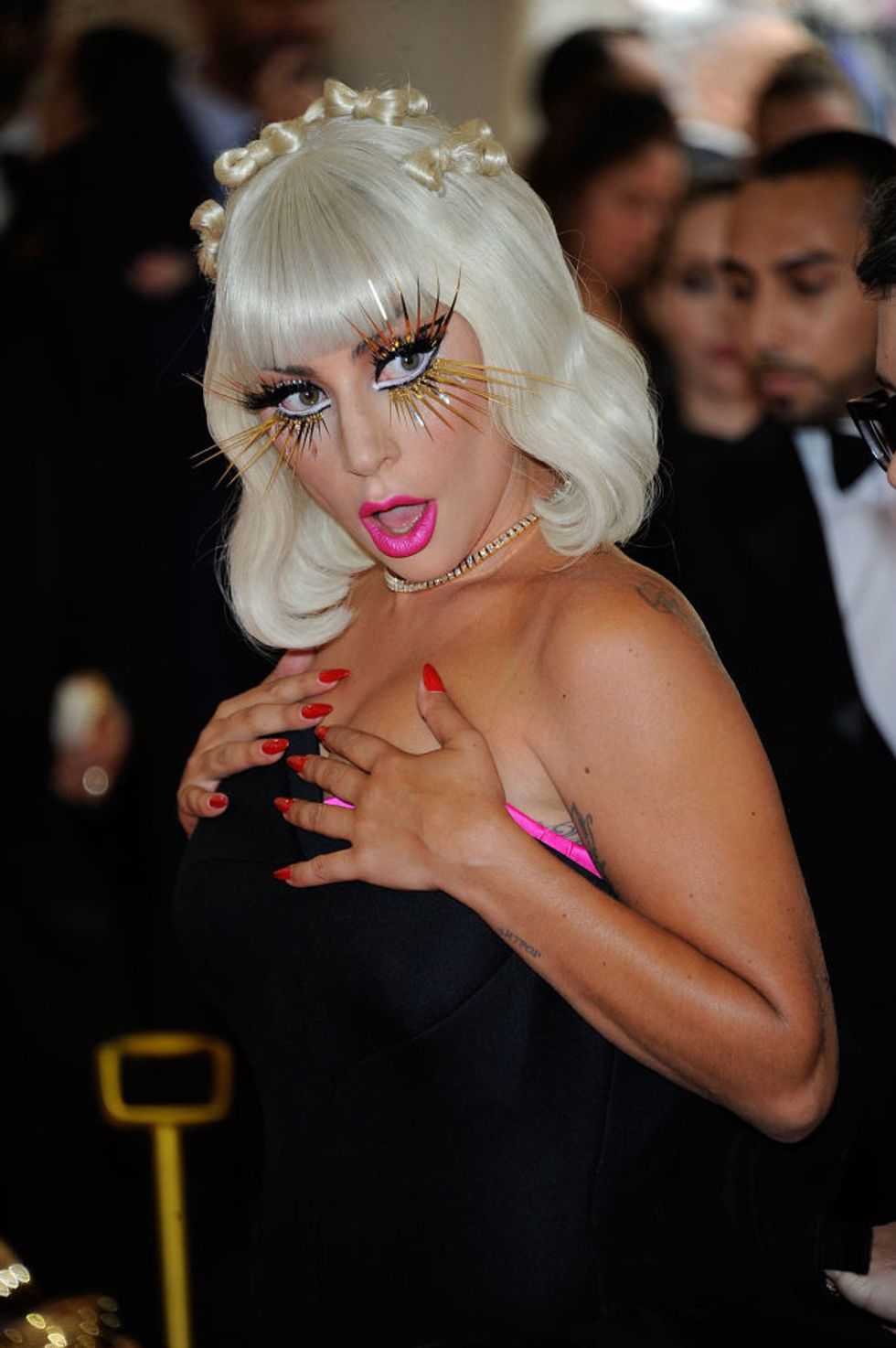 For the eyes: Gaga's ultra dramatic eyes were all courtesy of Marc Jacobs, as was the rest of her look. Makeup artist Sarah Tanno first used the Highliner Matte Gel Eye Crayon in Pink of Me and Blacquer, followed by Magic Marc'er Precision Pen Waterproof Liquid Eyeliner and Velvet Noir Major Volume Mascara.

For the skin: To prep the skin, Tanno started with the new, first-ever skincare product from Marc Jacobs Beauty, Youthquake Hydra-Full Retexturizing Gel Crème. The cream claims to "retexturize and moisturize at the same time," making it the perfect prep step for "a makeup-ready canvas and the ultimate red carpet glow must-have."

Tanno ditched the foundation and just used Accomplice Concealer & Touch-Up Stick, and topped the complexion off with Accomplice Instant Blurring Beauty Powder for a soft-focus, flawless glow. She used the Face II – Sculpting Foundation Brush No. 2 for a quick live touch-up on the red carpet.

For the lips: Tanno used Le Marc Liquid Lip Crayon in Flaming-oh!, an electric pink shade, and topped it with the Enamored Hydrating Lip Gloss Stick in Sweet Escape, a pink lemonade shade, for extra gloss and shine —which Gaga then reapplied on the pink carpet! 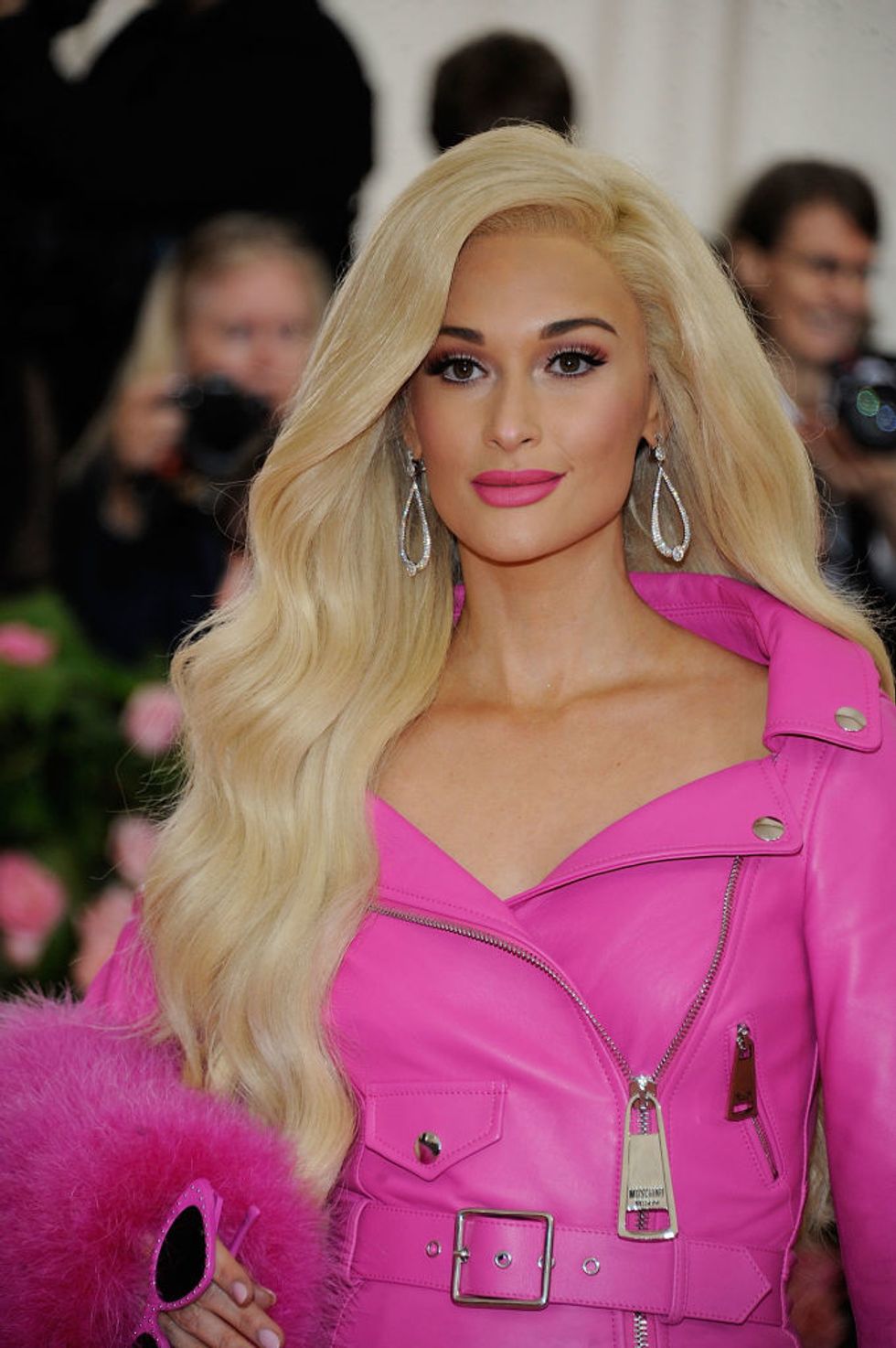 Musgrave's pick for the night was Pat McGrath. "Kacey's look was inspired directly by Moschino's Barbie," makeup artist Moani Lee told PAPER. "It was important for me to bring to life the essence of Barbie with doll-like, mannequin skin that was still breathable and satiny, finishing off with a power lip in a Moschino Barbie Pink using none other than Pat McGrath Labs iconic makeup."

For the eyes Lee picked the Mothership II: Sublime Palette shades Skinshow Glow and Rose Dusk for an understated look. She then followed it with Perma Gel Ultra Glide Eye Pencil in Xtreme Black, followed by the Perma Precision Liquid Eyeliner. She finished the pristine look with the FetishEyes Mascara.

For the skin: After completing the base, she topped the look with the Skin Fetish: Highlighter + Balm Duo in Nude followed by the MatteTrance Lipstick in Polaroid Pink, which she also used as a blush. To bring out the pink, the artist used Skin Fetish: Sublime Skin Highlighting Trio in Irisdescent Pink 003 and finished using the Buffer 003 Brush. 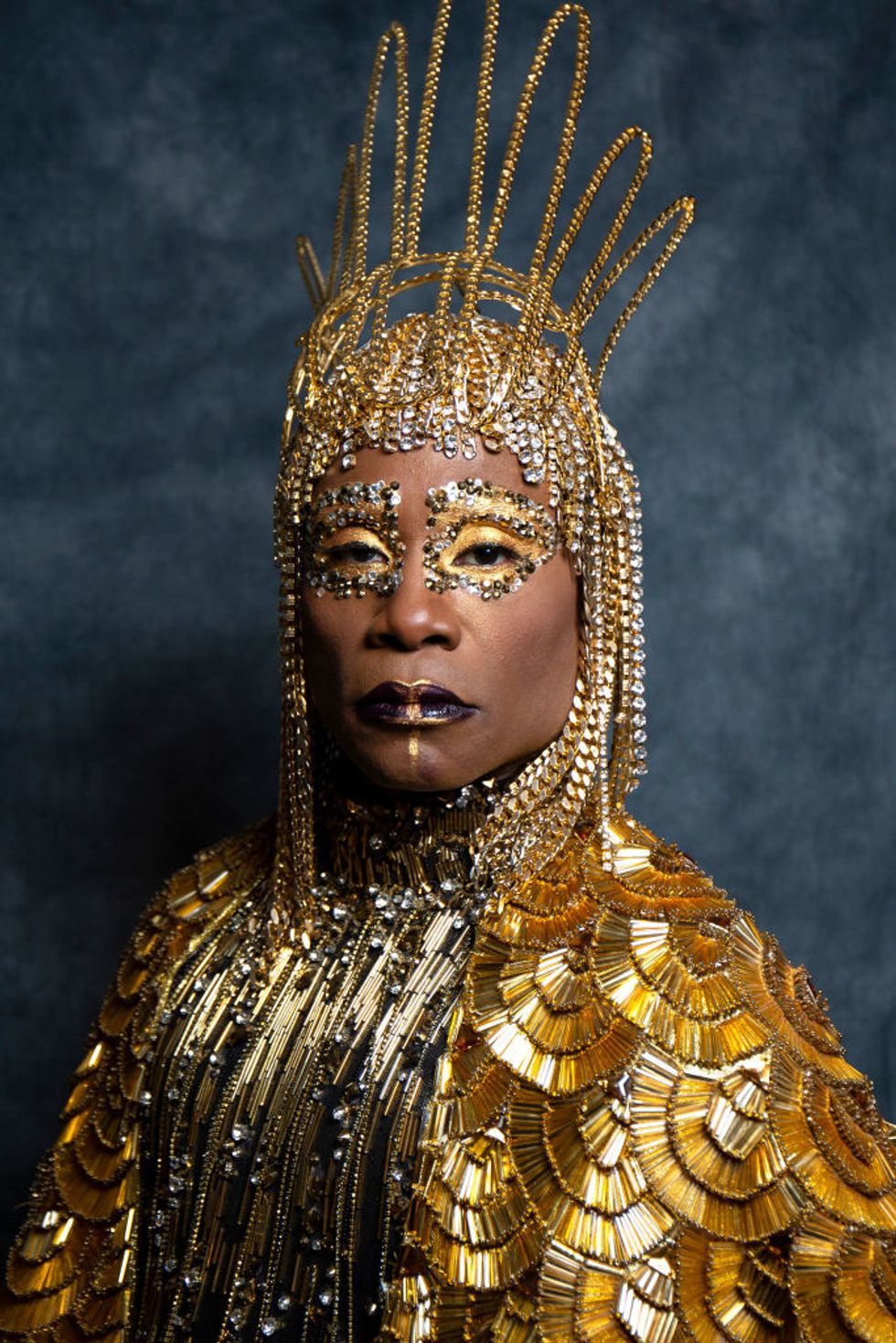 For the eyes: Another major moment of the night, crafted by Pat Mcgrath. To start, makeup artist La Sonya Gunter used the EYEdols Eye Shadow in Gold Standard followed by the Perma Precision Liquid Eyeliner. The ultra glamorous look was then finished by the FetishEyes Mascara.

For the skin: Much like Cardi, to keep the attention on the rest of the look, Gunter kept the skin simple and topped the minimal base with the Skin Fetish Highlighter + Balm Duo in Golden and Bronze.

For the lips: Lips were a big part of Porter's look and so was the work that went into it. First, Gunter first used the Perma Gel Ultra Lip Pencil in Deep Void to outline. Then she topped it with the MatteTrance Lipstick, also in Deep Void. The gold glow on Porter's lips, however, was thanks to the makeup artist's use of the EYEdols Eye Shadow in Gold Standard.