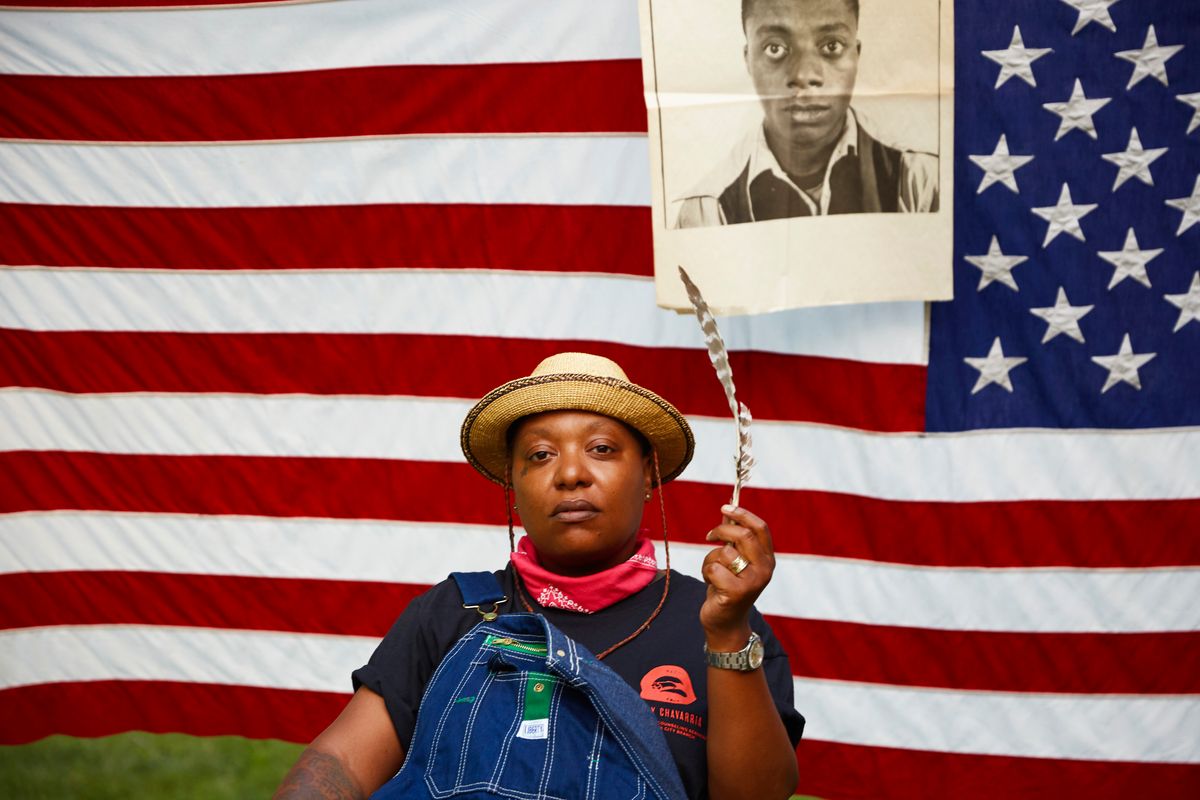 It was 1993 and I was at the dawn of understanding my own sexuality, gender awareness and racial consciousness that I first listened to the voice and rhythms of Meshell Ndegeocello.

Her first album, Plantation Lullabies, filled the air with a rich lathering of soul and funk, humming melodies of sex, politics and capitalism, with lyrics like, "The white man shall forever sleep with one eye open," and, "If that's your boyfriend, he wasn't last night." Meshell's style was graceful with a groove that makes you bounce. And every bit of it stands true with her works today.

The year I discovered Meshell was also the year I read my first James Baldwin book, Another Country, with notes of the same rhythmic elegance delivering similar messages of sexuality and interracial politics. Both of their voices were nourishment as I found myself, to quote from the book, "Stepping into a new and healing light."

I have found that life is profoundly subject to politics. And with this I realized that art is emotion and emotion can be so intimately linked to politics.

It makes sense to me that Meshell's current work developing a theatrical experience based on James Baldwin's text, The Fire Next Time, would be something the universe needs. And whatever may soon be revealed — an album of the accompanying music and spoken word is coming — will surely be something we will all be better for drinking in.

I had the privilege of asking Meshell Ndegeocello a few questions, social distancing in check.

I don't know, what do you call someone from space? I definitely identify as a two-spirit person, but I also feel that my experience as a woman is a gift in the way the world appears to me.

Where are you right now?

I am actually driving to see family in Georgia and just left the Robert E, Lee Memorial in Richmond.

I was recently revisiting one of my favorite performances of yours, "Outside Your Door" (live at NSJF). The warmth of Federico's keys, the easiness of the rhythm, the sincerity of your presence, Allen's amazing solo.

It had me thinking about how we are all very much sitting outside of the world's door right now in the time of COVID. Perhaps some normalcy has been restored at this point, but for many of us creation is complicated during this time. How have you been doing? How have you been creating?

When COVID hit, I took the time to finish things I'd started but I didn't try to play live or stream anything. I stopped trying to create for a while and just tried to complete. A few months in, I really needed to get off my laptop and started writing songs on my Omnichord, which is an electronic instrument from the '80s that I love. I just made some music for my friends.

Could you share more in regard to James Baldwin and your show inspired his work, called Can I Get a Witness? What's one thing you wish more people knew about James Baldwin or his message?

I started the project in 2016, a performance piece based around his book, The Fire Next Time, and we've been writing it, performing it, changing it, ever since. It's a community specific kind of thing. It shape shifts based on city and venue, and it's based on Baldwin's timeless wisdom and warnings, so much of which is as true now as then, as ever. The first thing I finished was the album of music from the project. I am working on how that will come into the world now.

I'd want people to know that even though he is seen as this divisive firebrand, he was really trying to bring us back to our most elemental humanity and to love. He worked to dismantle the delusion and mythology of race and gender and masculinity and sexuality to find what's human. Despite familial abuse and the abuses of society for his race or because he was gay, I am always amazed by his ability to conclude that love was imperative to our survival.

Your first album, Plantation Lullabies, was released in 1993. In what ways have you changed as an artist and person since then? The lyrics of "I'm Diggin' You - Like an Old Soul Record" come to mind. To you, how are the times similar and how are they different? What would you tell a 25-year-old today about what you wish you knew in 1993?

To be honest, my answer to this question and my words to myself at 25 would be to "look back less."

I see children today as a such a voice of optimism for the future. As a parent, what do you do to keep your child looking beyond the vast ugliness we see on display?

I don't know that we can ever do enough, but I guess I try to expose him to the people, family, literature, art, music and protest that support his hope, humor and beauty, and let him know he is loved and not alone.

COVID has accelerated the timeline our world was already on of transferring to more digital ways of working. As someone who crafts albums with an analog approach, how do you feel about this?

Well, I am not a total Luddite but I do believe in recording real people playing real instruments and capturing the energy in the room and not piecing tunes together. Human "error" can be a gift of inspiration.

That said, I am tired of all the advancement but I've fallen harder in love with experience and some of those can be digital. Tactile, sensory experience is really doing it for me right now though.

Whose photograph is this in this image [pictured above with the American flag]? Can you tell us what it means to you and anything you want us to know about his story?

That's a [Richard] Avedon image of James Baldwin. And I want you to know everything about him.

Will you be voting in the upcoming elections? If so, will you be doing so by mail-in-ballot?

Hell yes. And yes, I will. I can't be in the city where I am registered, so I will vote by mail.