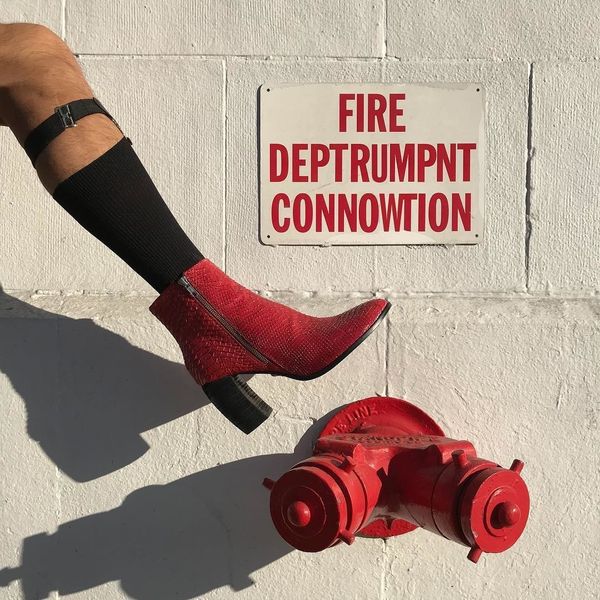 Why 'Men In Heels' Isn't Just a Trend

As a nonbinary person who was born male, I've been bombarded my whole life with debates about what's "for boys" and what's "for girls," and have fundamentally disagreed with most of them — especially as they relate to personal style. When I like a shirt or pair of pants, I always search for it in my size no matter what section of the clothing store I first find it in. The same applies to shoes. So maybe I've walked around in women's shoes, especially heels, in what would be considered "larger sizes" to some, but I've always felt incredible doing so.

A brand named Syro, which features a range of competitively priced, well-made heels — from kitten to stacked to sky high — in men's sizes, has made it easier for people like me. Its aim of "refusing femme oppression and liberating femme expression," makes me feel seen, and reinforces my belief that gender, as the either/or patriarchal trap we've always caved to, is over — especially when it comes to fashion. Since launching, Syro has been embraced by many people of queer and nonbinary experience, and allowed us to wear shoes that help radicalize our identities.

The nonbinary movement has many other pioneers, who don't specialize in shoes but similarly rely less on trend than on freedom of expression, from Gypsy Sport and Chromat to No Sesso and Wesley Berryman. All these brands occupy a likeminded space, which helps queer people feel less alienated within the old garde of insular fashion. The Phluid Project, which opened last year in New York, is the world's first gender-free store, forgoing the idea of binary clothing sections entirely. And of course, we can't forget the literal strides forward of working models today, including Richie Shazam, Alok Vaid-Menon, the Dupont Twins, Miss Fame, and Aquaria, who are starring in editorials and walking the biggest runways, all while wearing heels.

But a recent Vogue article, which suggested that men in heels is a "tricky trend," did the opposite of make me feel seen, especially in the way it seemed hell-bent on convincing readers that this is all novel. Not to mention, the heels discussed — from cuban to slightly stacked — were all barely above three inches. "Gender nonconformity is not a trend that we 'picked up,'" Syro co-founder Shaobo Han told PAPER in response. "On top of that, to only talk about mainstream high-end fashion brands that are making money off the queer movement without doing any work for the queer community, is dismissing actual queer brands and creators who serve and celebrate the community."

Three inches of chunky heel just might be a brave-enough height for one man struggling hard to not fall over. And yes, it could be argued that some of us have to start somewhere. But for other queer, trans, and nonbinary people I know who can truly work a sickening pair of heels — myself included — three inches is child's play. But to that article's credit, people like Elton John, Prince, and David Bowie were attributed as those who famously wore heels before they were even thought to be "trendy."

I needed to reach out to a few sistren within the community, not only to feel affirmed, but also to remind everyone paying attention that the concept of "men in heels" isn't new, news, or a fleeting trend. For some, especially those whose identities don't neatly fall into the binary, it's a lifestyle — it's freedom. Here is what some folx had to say when asked how they feel about what it means to be liberated through heels and personal style. And, as Han says, "It's who we are, it's our authentic life, and it makes us feel correct." Couldn't have said it better myself.

"When I wear heels it's not me being trendy or trying to attract attention, it's me expressing myself. I don't think of wearing heels as much of a big deal. It's normalized to me because I don't hold onto the toxic gender norms held over everyone's heads. In fact when I do wear heels I'd rather not have people comment on them. It sometimes can feel like I'm getting a pat on the back from a cis person for going against the gender binary, and things like that don't move us forward but set us back."

"'Be you're own cheerleader' — Suzanne Farrell. I grew up with and still live by the saying, 'Treat others the way you want to be treated.' All we have is right now, so why not live your truest self."

B. Hawk Snipes, Actor and Model

"It doesn't matter what gender is wearing the heels. All that really matters is, if they can SLAY in them."

"Personally, I believe the most masculine thing a man could do is wear a dress with a pair of heels and not be afraid to embrace his inner femininity."

"Heels on the male body isn't just a fashion trend as it has been around since heels were invented. As a gender nonconforming person, wearing heels has allowed me to feel powerful in spaces where I'm otherwise made to feel small and unseen."