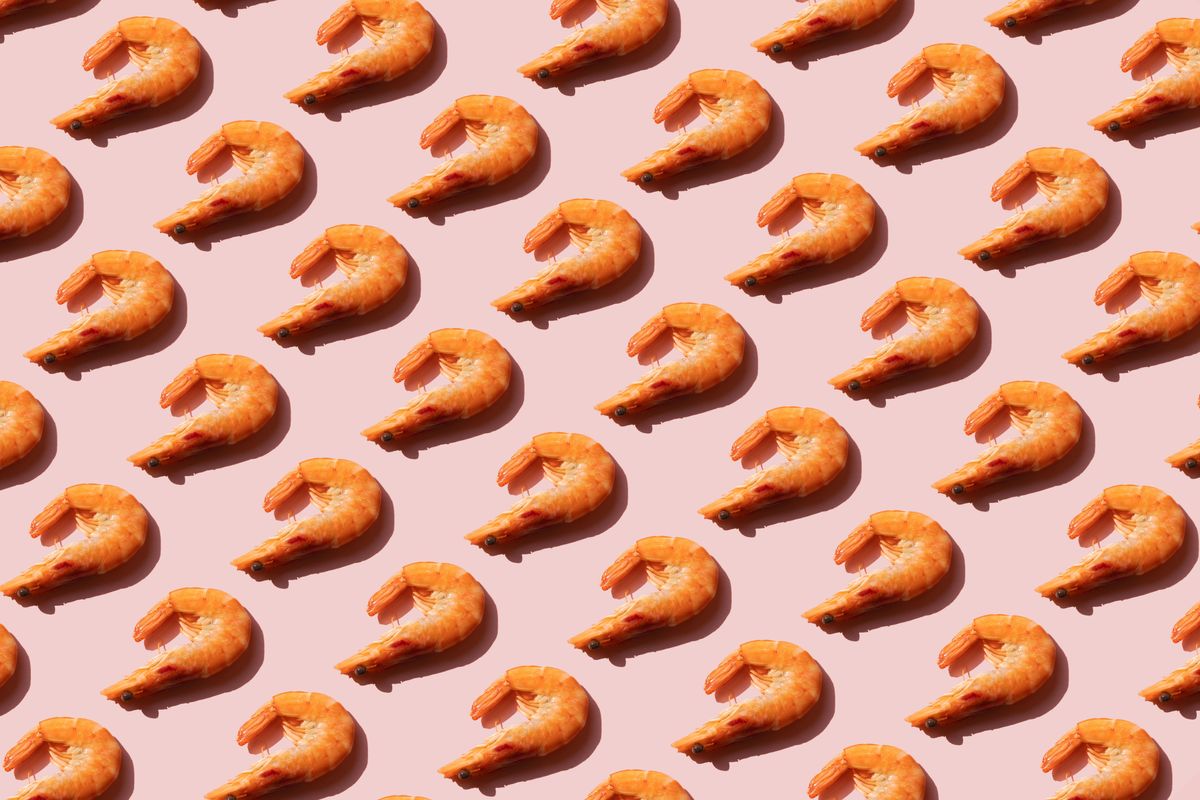 What do you get when you mix Cinnamon Toast Crunch, shrimp tails and a former rapper whose wife was the star of a popular '90s sitcom? Turns out, a recipe for guaranteed viral internet fame.

The whole cereal/ seafood/ minor celebrity saga originated yesterday after comedian and writer, Jensen Karp, shared a photo of what appeared to be cinnamon-sugar-coated shrimp tails that had somehow found their way into his morning bowl of Cinnamon Toast Crunch. Karp shared of photo his unsettling discovery to Twitter, tagging the brand and earnestly inquired about why the prize at the bottom of the box turned out to be seafood scraps while making sure to add the caveat that "this is not a bit."

As the tweet began to gather attention, Cinnamon Toast Crunch's Twitter account issued a statement in response that attempted to explain away the shrimp tails as nothing more than coagulated clumps of under-processed cinnamon sugar. "We assure you that there's no possibility of cross contamination with shrimp," they wrote, unaware that this would only escalate the situation from a mildly disturbing morning breakfast find to a full blown PR crisis for General Mills involving a public act of deliberate corporate deception.

Now slightly incensed at the sugary cereal brand's refusal to take his claims seriously, Karp fired back in another tweet "Ok, well after further investigation with my eyes, these are cinnamon coated SHRIMP TAILS, you weirdos," with another close up of the alleged shrimp tails in question. Karp later revealed that prior to his tweet he had already contacted General Mills about the shrimp tails and they had already offered to send him a replacement box, which he declined, but while the company was being nice in private, their public statement caused it all to go immediately south "I wasn't all that mad until you now tried to gaslight me?"

Probing deeper into the bag of cereal, Karp discovered that this particular box of Cinnamon Toast Crunch not only contained shrimp tails but sugar-dusted bits of string, more pieces of shrimp skin, a possible pistachio and a few squares of cereal with black bits baked onto their surface that would give anyone that's had to deal with a rodent problem in their pantry an immediate sinking feeling. Now fully freaked out by the box of nightmare cereal, Karp decided to open up the other box in the two-pack purchased from the local Costco that that bag had what appeared to be clear tape along the bottom.

Something regarding the stupid “Did he fake this?” take: there are black items COOKED ONTO the squares and tons of… https://t.co/iJpTMioYtR
— Jensen Karp (@Jensen Karp)1616509115.0

At this point, Cinnamon Toast Shrimp had fully devoured a good chunk of everyone's day with the internet fully invested and rattling off jokes, takes and memes at a great clip.

logged on to twitter expecting to see people fighting about a pandemic and mass shootings and racism but i forgot t… https://t.co/orFusVgkeR
— eli but medicated (@eli but medicated)1616507518.0

A representative for General Mills told the New York Times, who had now gotten involved investigating the matter, in a statement that "while we are still investigating this matter, we can say with confidence that this did not occur at our facility." They also added that "we are now waiting for the consumer to send us the package to investigate further," but Karp later tweeted that after the whole gaslighting thing he was less inclined to send the box to General Mills and instead was opting to have the tails and "black things" independently tested.

Karp revealed that he was in touch with a testing lab that had agreed to determine whether or not those black spots were indeed rat feces and that he had also been contacted by a "crustacean researcher" that had agreed to DNA test the shrimp tails. "All you have to do is say, 'This is such a bummer, we're going to look into it. We're going to recall the ones from your Costco,'" Karp told the Times. "But instead, they wanted to basically gaslight me." The saga had escalated to comedic proportions of absurdity by this point but given that we are all one year into quarantine you can hardly fault people for latching on to the story as it unfolded. And it all might have peaked there with independent lab tests and a New York Times article, if it weren't for an enterprising few that decided to dig a little deeper into just who exactly was Jensen Karp.

I originally approached them thinking it would help out! Then, they said I’m mistaking sugar for a crustacean. Anyw… https://t.co/ixu4LNuKgZ
— Jensen Karp (@Jensen Karp)1616528528.0

For starters, it turns out that Karp happens to be married to Danielle Fishel who many might better remember as Topanga from the 90s sitcom, Boy Meets World. "She's honestly mad," Karp told the New York Post. "She is really disappointed in General Mills' statement and hoped to see more concern, rather than just tell me it was actually sugar, not shrimp tails (which is insane). People are allergic (I am luckily not) and their main focus should be finding out how it happened to help anyone who could also run into this."

A quick skim through his Wikipedia page also revealed that Karp previously was rapper that went by the name Hot Karl. It turns out that in the mid-2000s, Hot Karl was poised to become one of rap's next major breakout stars, signing with Interscope Records for almost a million dollars and recorded a debut album, Your Housekeeper Hates You, that was said to feature guest spots from Kanye West, will.i.am., Redman, Fabolous, Sugar Ray and more but ultimately never saw the light of day. Karp even chronicled his stint in the music industry in his 2016 memoir, Kanye West Owes Me $300 (and other true stories from a white rapper who ALMOST made it big).

Don't worry though, Karp's Wikipedia page has already been updated accordingly to include all the relevant details regarding this latest cinnamon-sugar-covered shrimp tail chapter of his life.