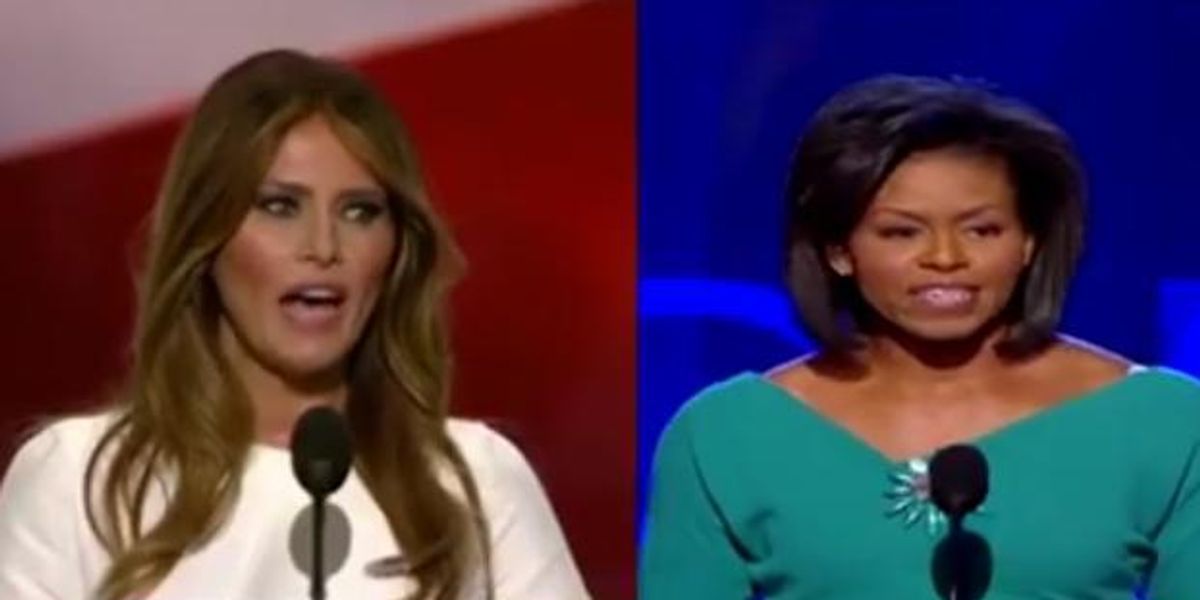 UPDATE: The Best of The #FamousMelaniaTrumpQuotes Hashtag

UPDATE: One of Trump's speechwriters, Meredith McIver, has thrown herself under the colossal spiked tires, and taken responsibility for Melania Trump's now infamous RNC speech, which contained huge portions directly plagiarized from Michelle Obama's 2008 speech at the Democratic National Convention.

McIver released a statement on Trump's own campaign site:

Some weird facts in theories are circulating Twitter about said Ms. McIver:


So, I've been trying to find any evidence that Meredith McIver existed before today. Anyone got anything for me?
— Melissa McEwan (@Shakestweetz) July 20, 2016

Her Wikipedia page was created TODAY, and claims that she's ghostwritten SIX of Trump's books since getting hired in September of 2001 (no).

Here's her "Everpedia," and the photo they've used for it, apparently of Meredith:

She graduated from the University of Utah (with honors), and was a former ballerina? Ok!

Consumate windbag Piers Morgan claims to have had many "dealings" with McIver, so if Piers Morgan says she's definitely real, then she is absolutely not a real person; do, say, and think the opposite of whatever Piers does/says/thinks.

Later that night I got to thinking, was Meredith McIver Trump this whole time?

The comparisons are staggering;


Almost so much so, that you can't help but feel like it was...intentional?

The cynic in me says the Melania thing was intentional to distract the media from all the insane lies and hate being spewed.
— Daniel Powell (@danieljpowell) July 19, 2016

Whatever the fuck was happening, it's truly unbelievable that the Trump camp so unabashedly disregarded the idea that the internet--especially how it is today--wouldn't fact change Mrs. Trump's words.

Also, try to best Michelle Obama with her own words, Melania. TRY IT! You can't.

Leave it to Twitter to turn this lil' scandal into a game, namely the #FamousMelaniaTrumpQuotes hashtag, trending now.

Here are some of the best:

"Four score and 7 years ago, our fathers brought forth on this continent a new nation..." #FamousMelaniaTrumpQuotes pic.twitter.com/VKcAlYtzU8
— Ethan Fixell (@EthanFixell) July 19, 2016

"It hasn't always been easy being a black woman raised on the South Side of Chicago." #FamousMelaniaTrumpQuotes pic.twitter.com/n6zSWiw6TO
— Meanwhile in Canada (@MeanwhileinCana) July 19, 2016

I'd like to take this opportunity to thank my speech writers...Copy and Paste. #FamousMelaniaTrumpQuotes #blackeagle pic.twitter.com/3CJtaxdqwA
— Joe Madison (@MadisonSiriusXM) July 19, 2016