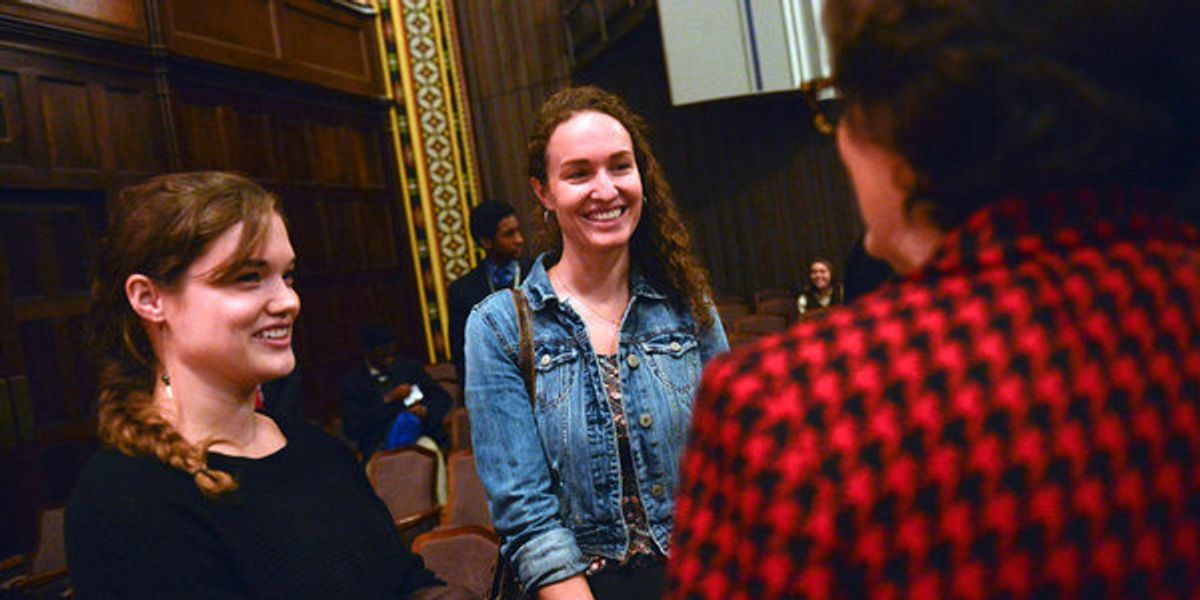 The New Yorker Piece on Megan Phelps-Roper Is An Amazing, Heartbreaking Portrait of a Human


by Katy Grannan for the New Yorker

Adrian Chen wrote a (very long) but very, very good piece for the New Yorker on how and why exactly Megan Phelps-Roper left the fanatically repugnant religious sect her family started: The Westboro Baptist Church.

Megan and Grace, post-exit from the WBC.

Megan, along with her younger sister, Grace, left the church in 2012, after a long and silent struggle to continue supporting the violently anti-gay, antisemitic, (and anti-human) diatribe her grandfather (WBC founder, the late Fred Phelps) ground into the minds of his children and grandchildren for decades.

As Phelps-Roper articulates to Chen, it was social media that liberated her from the shackles of this tyrannical cult.

After signing up on Twitter in 2009, and being ironically retweeted by comedian Michael Ian Black, Phelps-Roper saw her Internet platform exponentially rising, which, at first, motivated her in the worst way possible.

"It's not just like 'Yes, all these people are seeing it,'" she told me. "It's proof that people are seeing it and reacting to it." Phelps-Roper spent much of the morning responding to angry tweets, citing Bible passages. "I think your plan is back-firing," she taunted Black. "Your followers are just nasty haters of God! You should do something about that . . . like tell them some truth every once in a while. Like this: God hates America." That afternoon, as Phelps-Roper picketed a small business in Topeka with other Westboro members, she was still glued to her iPhone. "I did not want to be the one to let it die," she said.

Megan continued tweeting out vile messages for the sinners (aka everyone), and celebration when tragedy struck (proof of God's wrath).

Surprisingly, it was a Hollywood tragedy that first gave Phelps-Roper a glimpse of humanity--something that she had been taught not to have.

Brittany Murphy's death in 2009 was the catalyst to her path to freedom:

"Phelps-Roper had loved Murphy in 'Clueless,' and she felt an unexpected pang—not quite sadness, but something close—over her death. As she continued scrolling through Twitter, she saw that it was full of people mourning Murphy. The contrast between the grief on Twitter and the buoyant mood in the basement unsettled her. She couldn't bring herself to post a tweet thanking God for Murphy's death. "I felt like I would be such a jackass to go on and post something like that," she said."

In 2011, she developed a secret online correspondence (dating outside the church was strictly forbidden) with a male Twitter user she called "CG," and over a game of "Words with Friends," the two began an intense emotional affair; CG's liberal and accepting ideas started to rub off on the isolated Megan.

"I just really liked him," she said. "He seemed to genuinely like people and care about people, and that resonated with me."

So much so that one day, after viewing photos of a famine in Somalia, Megan burst into tears.

The same ghastly images were posted online by her mother, the church's mouthpiece, Shirley Phelps-Roper, as something to be "praised."

Eventually, Megan broke off communication with CG, after the compassion he was bringing out in her was becoming noticeable in her church. (there is a gorgeously heartbreaking mention of a dream Megan had about a clandestine meeting with CG that will bring you to tears).

Megan and Grace famously left their family in 2012, and drifted for a year from place to place, relearning how to be humans, and experiencing acceptance and kindness from the very people they were taught to despise.

Today they spend their time clearing their names, and advocating for social justice.

Although they are no longer in touch with their secluded family, Megan still loves them, and follows them from afar on social media, including their now infamous Vine account.

"Sometimes, when her mother appears in a video, Megan will loop it over and over, just to hear her voice."