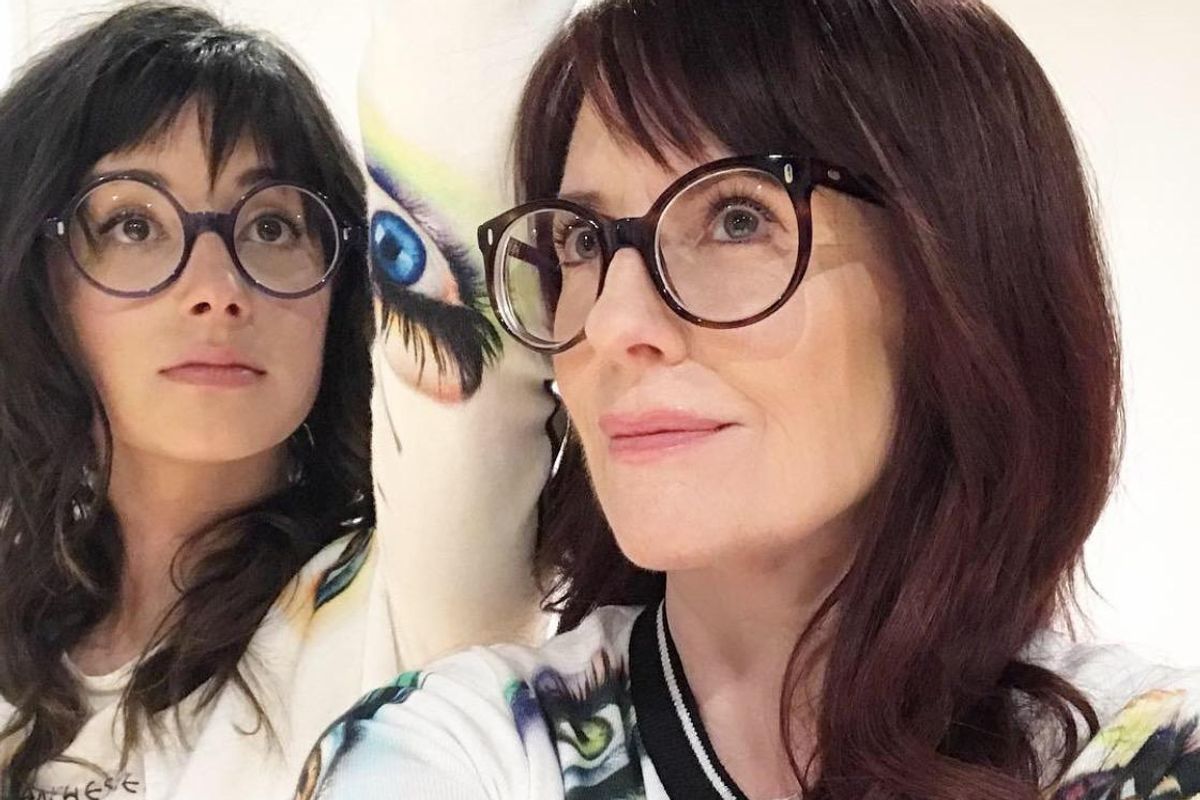 Megan Mullally and Stephanie Hunt of Nancy And Beth Talk Getting Naked for Art, Covering Gucci Mane and Will & Grace's Return

When you think of Megan Mullally your first instinct might be her turn as the ferocious Karen on Will & Grace, but you probably don't think of her as a chanteuse. You'll be happy to discover that she and actress Stephanie Hunt form the duo Nancy And Beth, who cover classic songs complete with hats, canes and showbiz! flare (and who knows, maybe someday an elephant?) Their self-titled debut album is out today and the women kick off a tour of the US and UK this spring with a show in California tomorrow. We jumped on the phone with them to talk about their maybe-psychic relationship, covering songs from Wynona Carr's "Please Mr. Jailer" to Gucci Mane's "I Don't Love Her," and whether Karen tweets.


So you guys started the band in 2011 and are releasing your debut album now—was there a reason for the long wait?

Mullally: Well, you know, I mean, kind of what happened was we started playing live in about 2012, early 2012. And then we recorded some really mellow stuff. Because we used to have a completely different vibe. The band was a totally different vibe—it wasn't all singing all dancing, with like hats and canes, you know? So those songs we recorded are now kind of novelty songs. Then we were getting ready to go into a period where I was going to be leaving from, it turned out to be like two years I was gone. I did a couple shows in New York. I did a show on Broadway and a show off-Broadway and another thing. Then I went to London and shot a show. However, we did have a moment in time to record the record. The record was recorded…

Mullally: Yeah. The record was recorded like 2 years ago and then we also shot the album art. And then we were separated for a while again and now we're back. But in the interim I must say that Stephanie and I have gotten together three or four times. She's come to LA and stayed at the house and we just pick out new songs and then we choreograph them.

So, over this time, this evolution, what has changed and what is this album capturing for you guys?

Hunt: Well, the album is very celebratory of music and all the songs are completely different, different genres. And that has never gone away. That's something we do and one of the biggest parts of our band, is that we celebrate all different types of music. And I think that it's just become more refined because now we're celebrating it with dance moves and hats and canes.

Mullally: The props are escalating. We're going to have an elephant pretty soon. I'm going to ride in on an elephant.

That would be amazing.

Mullally: It's definitely transferring to Vegas. It's going to have to because it's getting too big.

Move over J. Lo and Cher.

Mullally: That's right. They had a good run. Now it's Nancy And Beth's turn. Yeah, so the weird "showbiz!" exclamation point element is totally there and we love it. But it's also within the context of this daring, not formal band. Like the band is very deconstructed. So even though there's a showbiz element, there's this other element of like, these are just some kids playing and we're getting to watch it. And it's not a comedy band by any stretch but Stephanie and I are both funny people and we pick songs that we love but then the way that I choreograph them, there's often a witty element to the choreography. I think one of the most interesting elements of the band is the fact that there's a 30 year age difference between me and Stephanie (she's older—she looks good! She really takes care of herself). It just adds this crazy element to the band where I think people just sit in the audience thinking, what's that all about? It's been so natural and it's kind of self-explanatory and at the same time there's something a little bit…

Hunt: Provoking? There's a lot of question marks that sort of get deleted immediately.

Right? Drink a lot of water, that's the key.


Mullally: So like, for the album art, because nobody knows anything about the band and most people have no idea that I sing and a lot of people aren't even aware that Stephanie exists on the planet we decided to—the image for the album cover, front and back, just came to me in a vision, as it were. And I just couldn't shake it and I pitched it to Stephanie.

Hunt: And at first I was like, I don't know Meg. And then, you know, getting naked. But the more I thought about it, the more it actually was a good symbol for our band because despite any differences in age or race or anything else between us, there's a unified-ness. We found out that we have the same proportions.

Mullally: Yeah, we didn't know that we were exactly the same height and everything.

Hunt: From an anthropological standpoint, it's very interesting—just an image of what differences and similarities are. And we're just women.

Mullally: Yeah, it's just two human beings on the planet. And we didn't want it to be sexualized at all. We wanted to be as neutral as possible, but then I think when you see the back of the album there's a little bit of humor so you know we're not taking ourselves so seriously. But yeah, Nick Offerman has never seen me naked—I don't take my clothes off and run around, ever!

Hunt: But she will get naked for art.

Mullally: Yeah, for my art. But you know, I like it! I like how enigmatic—Emily, the photographer, she just captured exactly what we had wanted. And P.S.: fun fact, we did not shoot those together. We didn't stand there hanging out naked together because we just…don't do it. So I shot mine and then she shot hers, and then I went over to the monitor and I was like, could you put an image of me and an image of Stephanie up side by side so I can kind of see what its like. And they put these images up and I was like, are you fucking kidding me? We're exactly the same size. Exactly the same height, our shoulders are the same levels, our belly buttons, our knees.

There's definitely a doppelganger effect. Looking at the album cover and a lot of your press photos I look and I'm like, Okay, I know they're different people—but are they?

Mullally: That's so apropos, Kat, because that's kind of the whole thing. Sometimes, most of the time, people always say to us that they can't tell who's singing what because our voices blend so well. And we just have this crazy rapport together that's completely natural.

Hunt: We have like a psychic communication too. Sometimes if one of us messes up during the choreography, the other one will mess up too to make it look like we're both on it. We don't talk about any of it, and we don't look at each other while we're doing the dance—but we just kind of know.

Mullally: Like in the music video and everything, we are of a piece in a sort of strange way. I don't really have that relationship with anybody else.

How do you guys come to the songs you choose to cover and perform?

Hunt: My dad's a musician—my whole family's musicians and they just study. He's a masters in classical guitar. But I always just listened to older music, and he was always playing songs around the house. And I don't really listen to the radio that much. I don't want to know what's going on.

But you did cover Gucci Mane!

Mullally: Oh yeah, we'll definitely surprise you from time to time. We did an Adele song in three-part harmony with Petra Haden. So every once in a while we'll do something like that, one song that everybody knows but we'll fuck it up a little bit or put our spin on it.

Hunt: It's still that gut feeling. We have a freak out list of songs that we can't handle and have to perform, because it's kind of instinctual. We'll look at each other while we're listening and be like, oh my god, we can see something for this song. And that happened with the Gucci Mane. Which I'm sure happened because Megan was searching for some other song, and that song came up and then she was like, Oh my god, listen to this. And we bust up laughing and thought we have to do this.

Mullally: It's like the furthest from a feminist anthem that you could possibly imagine so we thought, we must do it. But just by virtue of the fact of the two of us doing it, it really makes you sit down and rethink things.

What else is coming up for you now that the album is out?

Mullally: We kick off our tour at Largo in LA. We've got dates through the whole summer. We have a bonus track, a completely faithful cover of Joni Mitchell's Blue in three-part harmony. And we have a music video to go with it. And then we're planning something called "Get in Shape with Nancy And Beth"—we're going to take five songs we've choreographed and we're going to shoot them against this backdrop in different costumes and it's going to be like this workout tape. And in August I'm back with Will & Grace.

Are you going to go for full Jane Fonda style?

Mullally: I think we'll have like, David Lynch style. You know his work-out tapes, right?

And you also have Will & Grace. The world has changed so much since its first airing—particularly for the LGBTQ community—how do you think the show will deal with the current state of the world?

Mullally: I think a lot of the writers, producers on the show are members of the gay community, so they've gone through all of those changes and they're well aware. I mean, everything's different. Technology, social media. Just the landscape of the political environment in which we somehow found ourselves. It's so radically different. So the thing that's going to stay constant is the show is going to stay funny, that's the first goal. The second thing is the relationships between the characters are so there and so solid and so easy to find, it's always fun to play those characters off of each other. I think it will be pretty cool.

Does Karen tweet? Is she a social media star?

Mullally: She's probably never heard of social media, no. I'm sure she does not even know what that is and has an assistant who carries her cell phone around. I'm sure she has no idea how to text or even send an email. But she's really good friends with Donnie and Melania. She probably tells Donald to quit twisting—and she means tweeting. "You should really quit twisting so much!" Let's call the writers with that one, 'cause that is gold.

Image courtesy of Nancy And Beth