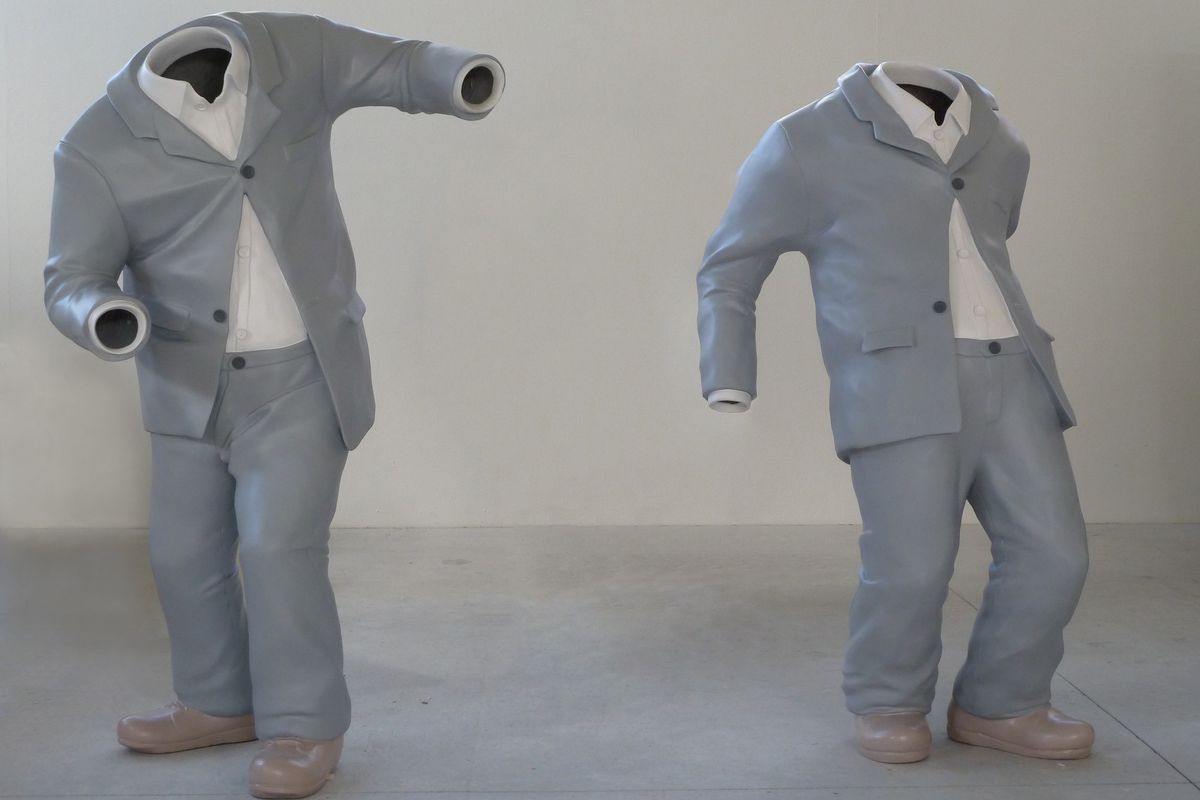 Check out part 1 of our ABMB mega guide HERE and part 2, which is HERE.

The AB/MB PUBLIC sector, produced in collaboration with The Bass Museum, will feature 20 site-specific installations in Collins Park (Collins Avenue between 21st and 22nd Streets, South Beach) beginning Wednesday, November 30, 8 p.m. Using the theme "Ground Control" ( and inspired by David Bowie) works by artists from 10 countries will be on view all week. Some highlights: Erwin Wurm's larger-than-life sculpture of two figures called "Big Disobedience"; Tony Tasset's monumental sculpture of arrows; David Adamo's small bronze sculptures of everyday objects (flip flops, styrofoam cups etc.); and a street light by Wagner Malta Tavares that will glow in the dark. Performers at Wednesday's opening include Lady Bunny (who will transform the park's rotunda into a spaceship-disco tribute to Bowie), Rob Pruitt, Naama Tsabar and Davide Balula.

Wynwood Walls (2520 NW 2nd Avenue, Miami) and the Goldman Family launch their new collection of 12 artist murals with a big opening celebration on Tuesday, November 29, 11 p.m. to 2 a.m. The latest walls are by AVAF, Beau Stanton, Case, Dasic Fernandez, David Choe, Faith47, Felipe Pantone, Findac, Okuda, Pixel Pancho, Risk and Tatiana Suarez. Also, Japanese street artist Ken Hiratsuka will show several carved boulders. The theme for 2016 is "Fear Less," in honor of the late Tony Goldman who launched the Walls with Jeffrey Deitch in 2009. Additional works by the artists will be on view in the Goldman Global Arts Gallery, and an exhibition curated by Peter Tunney and Jessica Goldman Srebnick will be up all week in the Garden House space. On Thursday, December 1, 6:30 p.m., there's a panel discussion with CRASH and photographer Martha Cooper in the gallery. And, finally, they have commissioned Audrey Kawasaki to create a mural for The Hotel of South Beach (801 Collins Avenue, South Beach). Citi is their Presenting Sponsor.

The second edition of the Satellite fair moves into the Parisian Hotel (1510 Collins Avenue, South Beach) from Thursday, December 1, through Sunday. This is an artist-run and concept-driven alternative fair that includes music, performance, new media and technology. For example: They're planning a a queer strip club, a virtual reality lounge, a post-feminist tattoo parlor and after- hours entertainment in the hotel's penthouse curated by NYC alt venue Trans-Pecos. Look for the giant milk carton and cereal bowl out front by the art duo Jen & Paul.

Artsy and SoundCloud present "Collective Reality," an immersive virtual reality experience, in the Faena Art Dome on the beach behind the Faena Hotel (3201 Collins Avenue, Miami Beach) on Wednesday, November 30, 8 to 11 p.m. They are planning several site-specific works by artists including Rachel Rossin, Jon Rafman and Jacolby Satterwhite, plus a special musical guest. Note that this an "invite only" and RSVP mandatory event. GUCCI provided support.

The second edition of the X Contemporary fair is at the Nobu/Eden Roc Hotel (4525 Collins Avenue, Miami Beach) starting with a VIP vernissage on the morning of November 30 and ending with a big, private outdoor closing party on December 4. They're expecting 35 international galleries along with an exhibition curated by Michael Klein that's dedicated to "The Women Who Made Modern Art Modern," profiling 16 art dealers from the 40s, 50s and 60s.

Miami Project 5 runs from December 1 thru 4 with 50 global galleries showing at Indian Creek Drive and 67th Street, Miami Beach, a block away from the NADA fair. They've also got an online preview via Artsy starting Tuesday, November 22.

The Other Dimension, via Museum of Contemporary Art North Miami

Argentine art collector and real estate developer Eduardo Costantini -- the man behind Oceana Bal Harbor (10201 Collins Avenue, Bal Harbor) -- will unveil that condo's new art collection at a big VIP-only celebration on December 2, 7 to 10 p.m. Jeff Koons, who created two sculptures for the project, will be an "honored guest" along with several of the other artists whose works have been commissioned for the site including Taryn Simon, Callum Innes, Garth Weiser, Juan Usle', An Te Liu and Jorge Mendez Blake.

New York/Berlin-based artist Yvette Mattern will launch a large-scale public installation called "The Global Rainbow" on Monday, November 28 and up through December 3, 6 p.m. to midnight daily. The huge work using seven beams of laser light should be visible from the Design District and across Biscayne Bay to Miami Beach. The Ritz-Carlton Residences, Miami Beach (4701 Meridian Avenue, Miami Beach) and Lionheart Capital commissioned, and will be promoting the piece on social as #RitzRainbow.

SOHO Beach House (4385 Collins Avenue, Miami Beach) brings their big event tent back to the beach with daily programming including a private party on November 30 for the Paddle8 auction of selected memorabilia from director and producer Brett Ratner's extensive private collection. Jean Pigozzi, Thomas Hesse and Alexander Gilkes co-host with Ratner. This is a benefit for the Museum of Tolerance and the Simon Wiesenthal Center and the auction opens on November 21 and runs until December 6. Check it out (and bid) HERE.