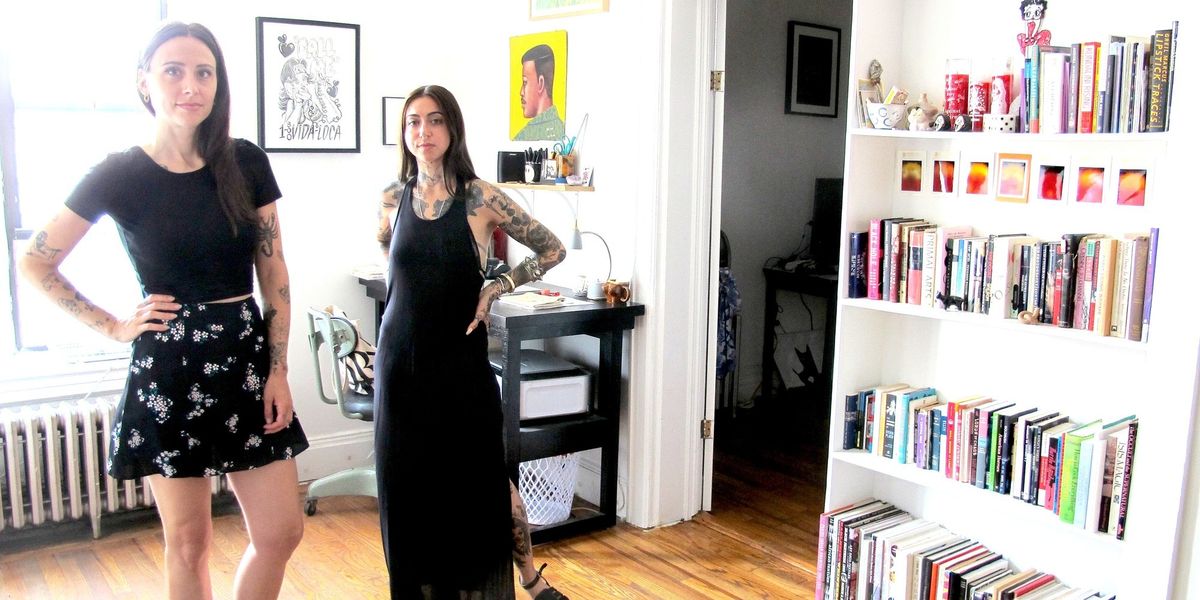 In a Williamsburg walk-up apartment surrounded by corner store prayer candles and large dripping ferns, a witch is telling me my future. She's shuffling a tarot deck with long fingers marked with delicate tattoos and thick silver rings, ready to pick the cards that will answer the one question I can think of that I actually don't know the answer to: Should I leave my doomed but passionate relationship now or wait until it implodes? The astrologer, tattooer, artist and practicer of new magic known as Small Spells to her followers and Rachel Howe to everyone else, smiles comfortingly at my question. "I asked the same thing last week," she says, dealing my fate. The relationship was over by the end of the week.

Howe, giving a reading to Messinger.

As an overly logical and mostly cynical romantic, I soon realized that it wasn't just the magic of Howe's simple yet intimately illustrated tarot deck that foresaw my future. It was her empathy and natural perception that does the real work, whether she's giving a reiki session, teaching tarot classes or writing an Instagram post breaking down the psychological aftermath of Mercury in retrograde. That same ability to be honest, personal and unpretentious has carried over in her artwork, where she uses her minimalist tattoo flash drawings to depict something deeper. She's cool and she makes magic seem all the more approachable.

Thanks to her good friend, fellow witch and publisher, Tamara Santibañez, who is similarly tatted out and naturally intuitive, you can now bring home the gift of Howe's magical introspection with a fully illustrated tarot deck and guide. Santibañez's new publishing house, Discipline Press, focuses on artists' books that embrace sexuality, highlighting queer works, black and brown empowerment, and DIY zines that are equally aesthetic and informational. The Small Spells tarot deck is both, with the classic tarot symbols redrawn in Howe's bold style and reinterpreted for a modern audience. The black and white cards come with a full guide that explains the age-old practice in a relatable, feminist voice, far from the esoteric, Renaissance-fair style decks of the past. Together these women hope to promote witchcraft as a holistic, open minded method for self improvement, an inclusive movement rather than a practice historically reserved for the outcasts of society.

The definition of the occult is to be hidden, but Howe and Santibañez have shown that the door to the world of new magic is always open, as long as you know where to look. We met with them to take a first look at the new Small Spells tarot deck, available for order here, and go deep about the process of creating it, the history of witches as feminists, and the healing power of magic--even if you don't believe in it.

How did you meet each other? Did you know you were both witches when you met?

Howe: A few years ago I had an idea for a tattoo of some eyes that represents intuition. I had a drawing of it that I had drawn and I was sitting in McCarren Park, and I just got this feeling that I needed to get the tattoo right then. So I went to Three Kings and Tamara was doing walk-ins. While she was tattooing me I had this other sudden urge to tell her I do reiki, which lead to her coming and getting reiki from me, and then we were friends. It's great because we can get together to talk about witchy stuff, or energy stuff, and learn new things together.

Santibañez: I think we were both in the same place with this interest. I was doing magic but it was very new to me, I was "in the broom closet" as they say. I was shy about it, so it was really cool to meet Rachel who was also getting into it. Now I'm more of a Green Witch. I do a lot of Herbalism, plus reiki, astrology and ritual. It's nice to have someone to share this interest with. Someone who, you know, doesn't think you're crazy when you talk about a ghost you saw.

A calendar by Howe showing major days in astrology.

It seems that astrology, tarot and new magic has become increasingly popular lately. Why do you think there is this sudden interest?

Santibañez: The archetype of the new witch is expanding. I think the model has become a lot more accessible, and in part due to people like Rachel making it cool. The aesthetic of magic can be a very esoteric thing, overly goth or a hokey renaissance faire kind of thing, but she's showing what it looks like to approach it in a broader, younger way. And also make it more political.

Witches have always been a political identity. Historically, they were women who were ostracized and persecuted because of the knowledge they had wasn't fitting into traditional power structures, whether that be western medicine or organized religion. I mean you look at the Salem Witch Trials, it was a femi-cide. So the fact that we can talk about ghosts and herbs and magic openly today and not have to worry about someone taking us to trial is a huge change.

Howe: I'm trying to look at the trend as a good thing, not like a thing where in a year people won't be interested any more. It's all about healing, so thinking about alternative ways of existing is always good. For me, it's a living but it also defines how I live. New Magic is about empowerment, about reclaiming your agency as a person, and people are feeling that that is being taken away from them now. I think that people are interested in astrology now because it helps you put structure to your life, it gives you more power and makes you feel more in control while opening your perspective.

How did the Small Spells Tarot Deck come to be?

Howe: I had been learning tarot for a while and had gotten involved with a weekly club of people who would delve into the meaning of each card. It was really intense and I was getting back into drawing at the time, so I started really thinking about drawing my own cards. Tamara was talking about all the publishing projects she was doing with Discipline Press and we realized it was the perfect collaboration.

I started drawing them out of order as they would come to me. Sometimes, I would draw something and it just wouldn't feel right, energy wise, so I would start over. I was thinking, there are so many decks out there, so what do I want to contribute. A lot of what people like from my astrology posts are that they are clear and accessible, so these cards had to have a very clear meaning. It has to make sense to me to make sense to other people. I've tried to update the language into something that we can relate to.

Santibañez: Advice I always hear for people who are learning how to read tarot is to investigate the visuals of the card before you look up the meaning. But a lot of times the symbols in tarot illustrations can be obscure and a bit archaic. Rachel's cards are pretty universal even if you don't know tarot. To me, something like this is political. People might not realize that at first but it's powerful.

Howe: It's exciting that I illustrated the cards in such a way that, when I give readings, it shows so clearly what the message is. I'm picking up these communications in a language that I translated myself.

Splash: Rachel Howe (left), the creator of the Small Spells Tarot Deck with her publisher Tamara Santibañez or Discipline Press. All photos by Kate Messinger.