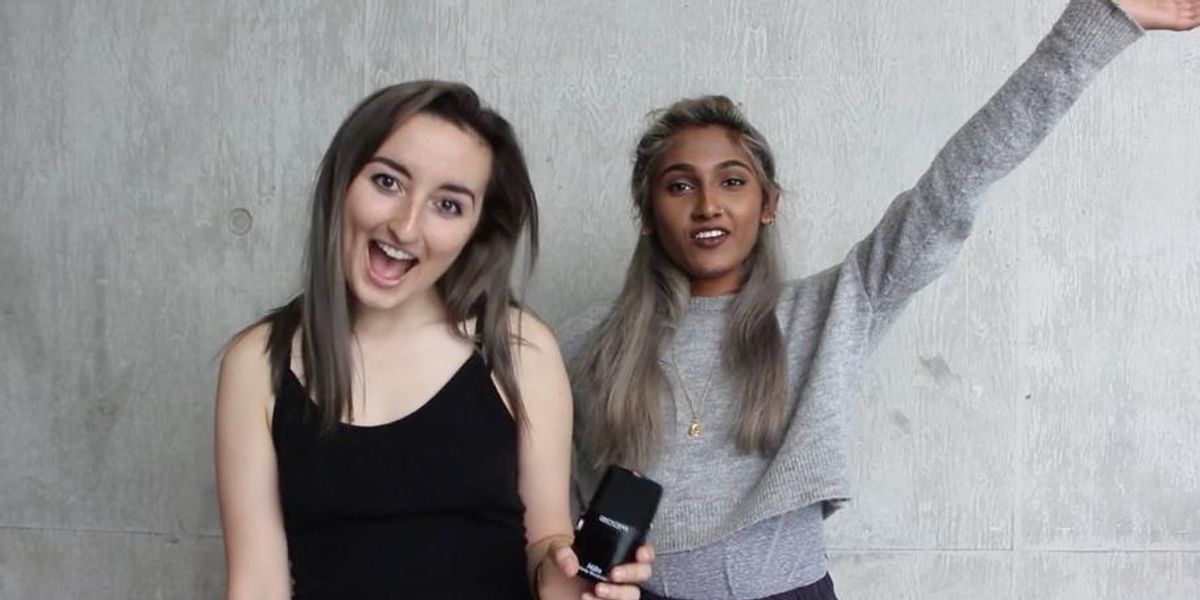 In an art world where elitism runs rampant, Central Saint Martins graduates Zarina Muhammad and Gabrielle de la Puente decided to give themselves a space to amplify others via their website, The White Pube.

A cheeky play on "The White Cube," it began as a criticism site, and has gradually evolved into a platform meant to disrupt mainstream art, axe pretentious language and get rid of the notion that identity must be central to one's work if you're a marginalized person. The first step? Deconstructing the notion that a piece's worth must be determined by an arbitrary star rating, and instead replacing ratings with emojis to better convey their opinions.

Since their criticism caught the art world's eye, de la Puente and Muhammad have since expanded into putting on shows to showcase their work and that of others. Often, a requirement for them in selecting work is for the artist to not have studied Fine Art at any educational level. Their latest show, The Leaf of Pablo, explored their thoughts on network fatigue—a concept popularized by Pablo Larios that artists should work on a local scale, prompting collaboration that ends the artist's position as a loner in this world. In a sense, The White Pube is both optimistic and opportunistic; art's possibilities are truly limitless, and using worldwide collaboration, particularly in a digital format extends the concept of what art can be. PAPER chatted with Muhammad and de la Puente over Skype to learn more about the emoji-filled lens through which they perceive art.

pablo docu from Gabrielle and Zarina on Vimeo.

Tell me about The Leaf of Pablo.

Gabrielle de la Puente: HUTT Collective in Nottingham invited us to do an exhibition. It's quite weird because The White Pube is a platform for art criticism, so when we do an exhibition, we have to consider what it means for an art critic to do an exhibition. We said the Zayn Malik Zindabad [show] was us as curators, and then this, The Leaf of Pablo, we finally almost hit the mark between artist and art critic, which is quite nice.

Zarina Muhammad: This way our identities as artists and critics are heightened, and it doesn't necessarily mean that we code switch between the two. It's fluid.

GD: Once you see the images, the aesthetic of The Leaf of Pablo is very balanced between the actual practices of Zarina and myself. It's not that we should exactly meet in the middle with a balance of sharing The White Pube's identity, but we have in this exhibition.

ZM: The reason it worked and took off was because, in second year [at CSM] our practices ran parallel. The discourses we engaged with were aligned, and we were in conversation as artists, talking to each other about our work.

How do you use your experience as art critics to inform and improve upon your own pieces?

GD: It's normally just the conversation. The White Pube is an ongoing conversation between Zarina and myself. Whether we go to Frieze or a smaller exhibition or artist-led space, the text that we publish and the ideas and the things that we're reading between us--that is what then informs the work itself.

ZM: We balance criticism and action. The way we talk and write about art, we were always quite keen to make sure that it has an effect. When we decided to run Zayn Malik Zindabad, we were complaining about lack of diversity in the arts and lack of thorough critical discourse around South Asian art and South Asian artists. We wanted to change that, so we created a critical space border.

How do you feel you can disconnect identity as a main component of someone's art when critics often find a way to center reviews on it?

GD: We were commissioned by Shape Arts, a disability led charity, to review parts of Unlimited festival, which has a few aims. One of them is to embed disabled artists into the art world, and the other one is to commission high-quality art by disabled artists. Another is to change perceptions of the audience who come to see the work. Mine and Zarina's conversation as we published these reviews was, "Is this a work by a disabled artist or an artist?", and "How much does their identity feature in the work itself?".

We reviewed Assisted Suicide: The Musical and Zarina sent me it to proofrea. I said, "You have mentioned that he's deaf? Should we do that?" It's quite interesting. So there are those two levels, and I think both of them are politicized. If you do put your identity in front of you, then it puts into question the actual quality of the work, and the artist and the curators are then conscious of how that produces high quality work, whereas any straight white middle class able-bodied male wouldn't have to admit or justify or frame their identity in the same way. Because the quality of their art is just assumed to be very high.

ZM: The thing with Zayn Malik was there was such a vacuum when it came to spaces for South Asian artists to just say, "Okay I'm not a South Asian artist, I'm just an artist." It's so trendy and really quite lucrative if you do lean into it. For me it's literally just about speech and identity generally, and the position of the artist. I don't really particularly care that much about being brown at this point in my practice. Where do I go? How do I create that vacuum around my work?

How would you describe your own personal art styles? What mediums do you use?

ZM: At the moment I'm very obsessed with the idea of being in conversation, and the idea of relativity. Last year I Googled what relativism really meant, and I was like, "Yes, that's me. I need to get on that." I'm a bit done with the idea of trying to convey things through signs and signifiers, so I'm at the moment just talking about what I'm thinking about.

Gabrielle: My work is closer to debris. I let life happen and then keep hold of bits of it, take a picture of them on my phone, and then those are the things I'll print off and put in the exhibition. I was at a family party recently and my mom and auntie sang very loudly when a David Bowie song came on. Straight away, I just filmed it, and then that was my contribution, in the same way that Zarina's was her speaking to the web cam about Network Fatigue. That was my network fatigue.

We went onto the beach at one point in the summer, and I found so many pieces of porcelain that had still remnants of design and blue deers on tiny little chips. I collected all those little pieces and now those are in the exhibition. I think it's poetry, I think it's the expanse of poetry.

Is there a reason that you draw from pop culture to name your exhibitions?

ZM: In my piece, where I'm talking to the web cam, I talk abut Kanye's performance last year at the Brits--when he had everyone up on stage--as an extension of network fatigue. That is the ultimate kind of collectivity for me. That was such a brilliant moment of solidarity and it helped name this exhibition.

In a way, were you trying to comment on how, for many people, pop culture is their only form of culture; the only time they're actually exposed to art?

ZM: I don't know if it's a conscious comment, but it's something that we've kind of done a lot. Trying to normalize something within this climate. Art is kind of this ivory tower, this pristine, and precious thing. We're kind of translating it, saying, "You can get a leg into it," maybe. You know the turn down service in hotels, where they just peel half the bed away so you can get in yourself, and they put the chocolate on the pillow? That's what we do. Not so much consciously ripping the sheets off, but just one little corner.