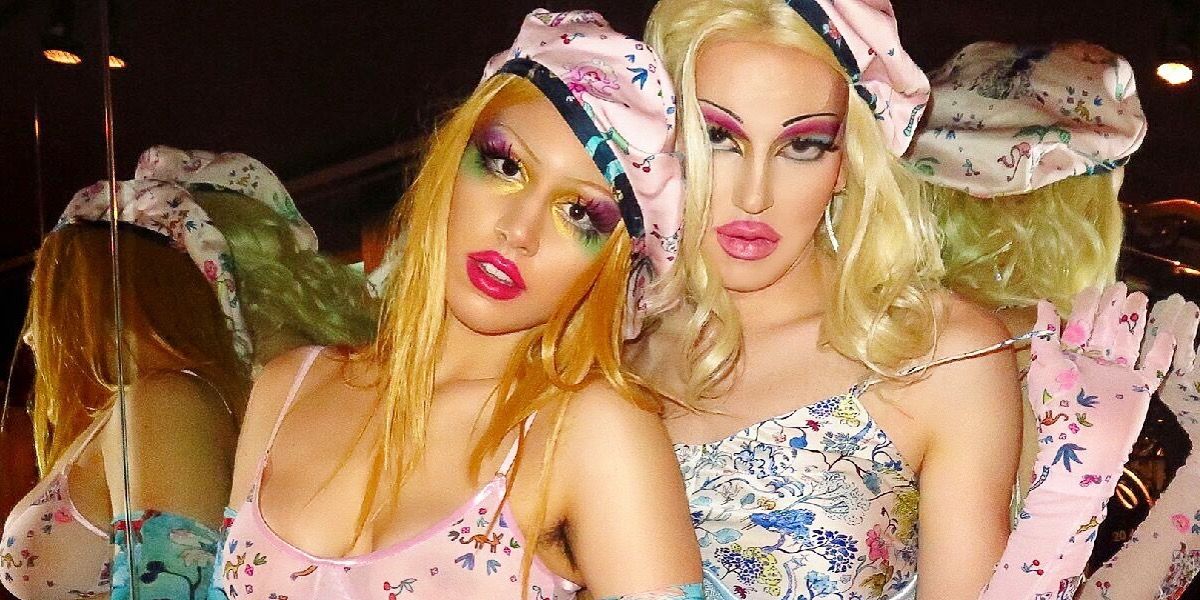 Meet The Mastermind Behind the Surreal Fashion Label, "Tropical Rob"

Robert Hurlbut is the neon-loving mastermind behind the aptly-named Tropical Rob, a surreal, genderfluid ("sometimes I wear my slip dresses out") fashion line that draws inspiration from cultural icons as disparate as The Spice Girls and Dr. Seuss. Already counting Baddie Winkle and some of downtown NYC's coolest kids as huge fans, Hurlbut is bringing an in-your-face splash of much-needed color to the streets of New York via his playful illustrated prints, floaty silhouettes and 90s kid cultural references. So just in time for spring, we spoke to the textiles maven himself earlier this week about everything from Leo circa Romeo & Juliet to Baddie's wild Grammy's gown that had us positively gagging. 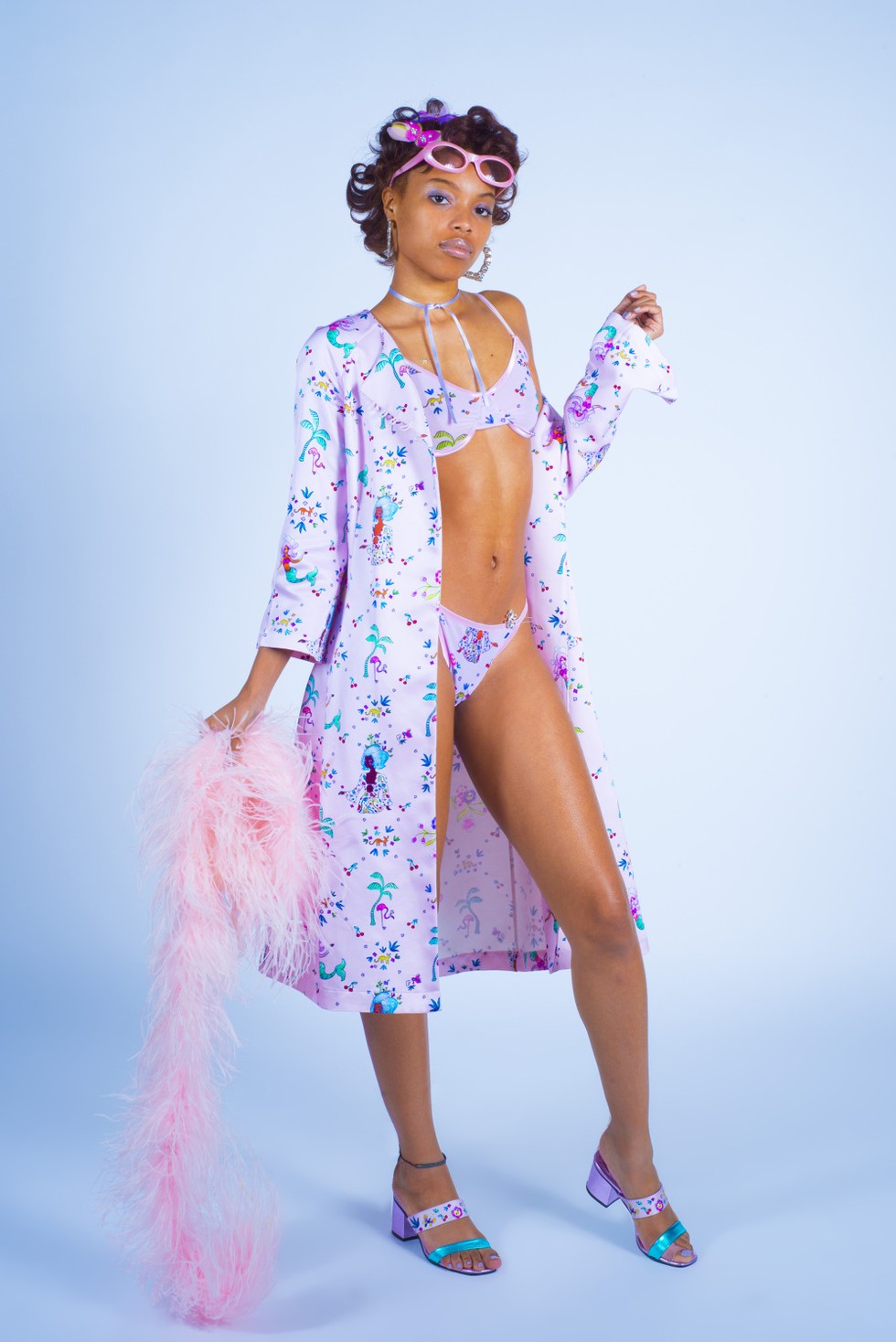 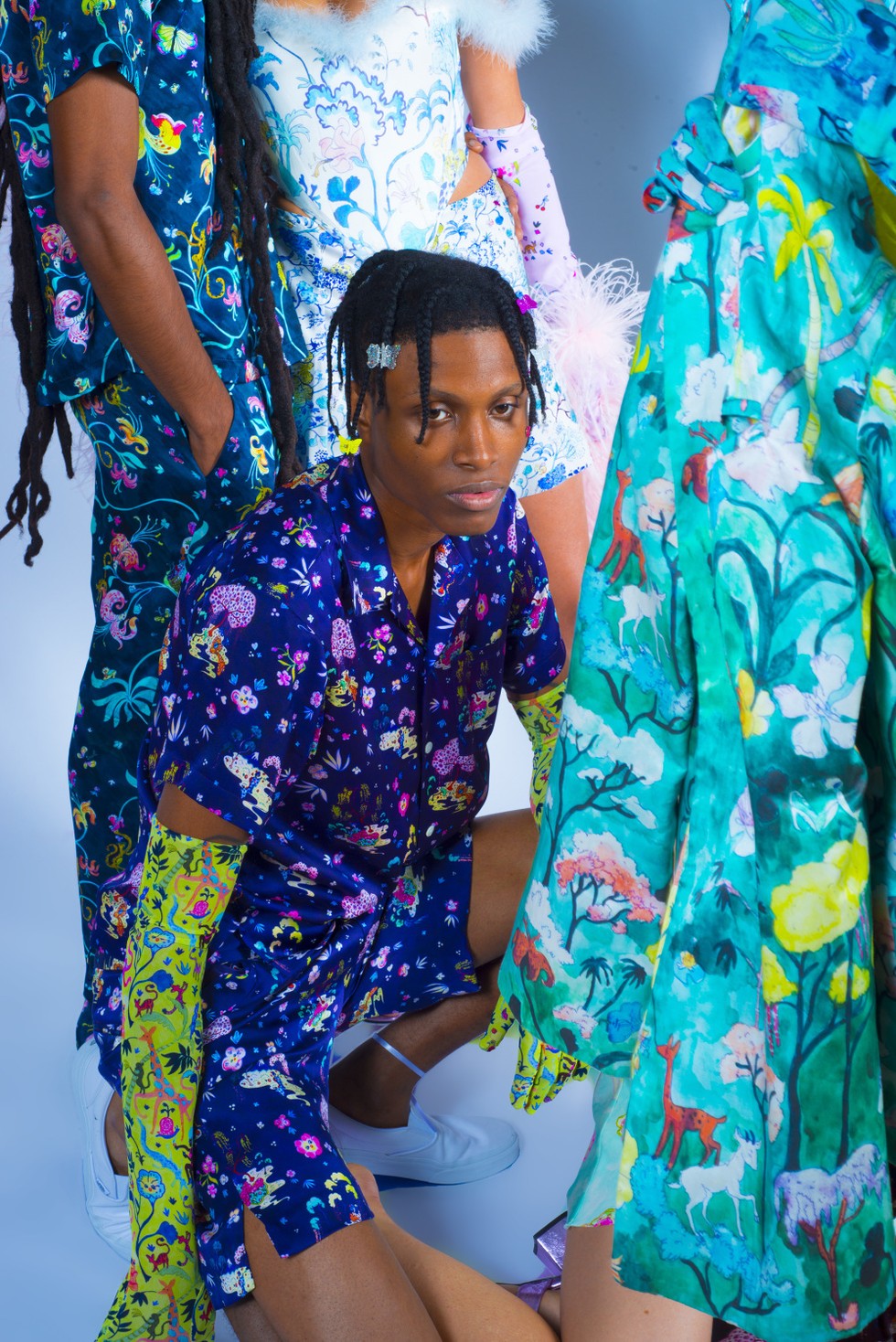 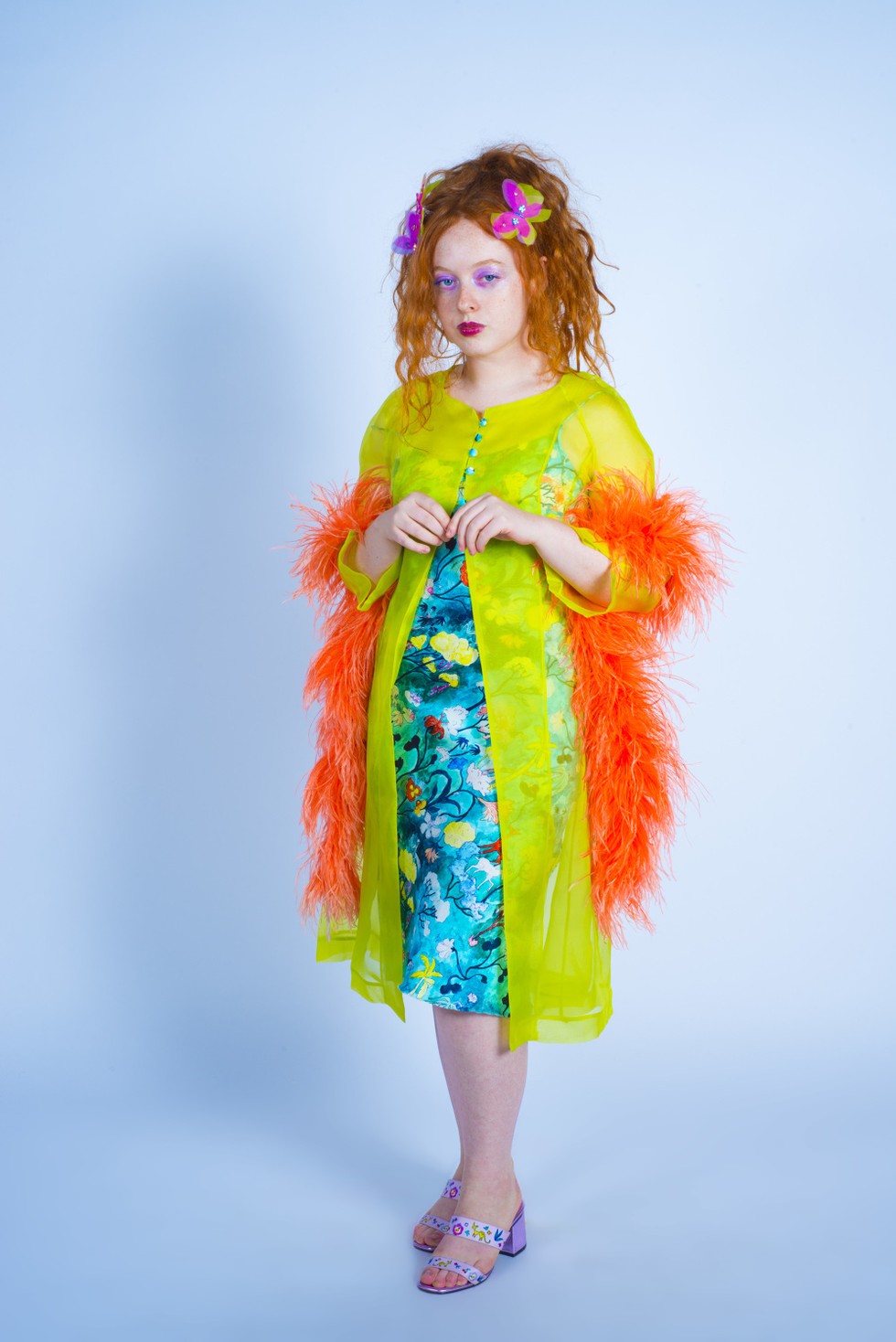 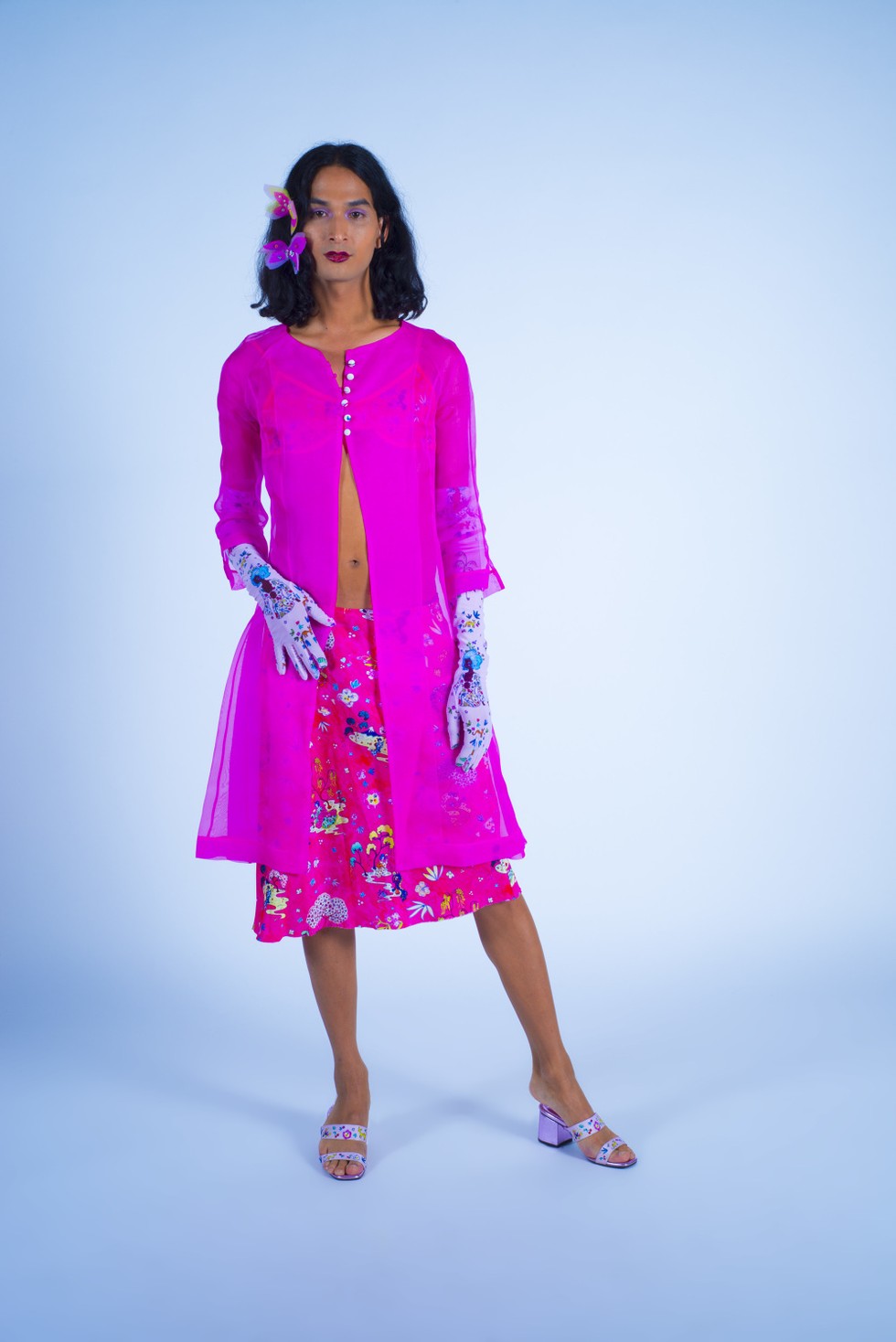 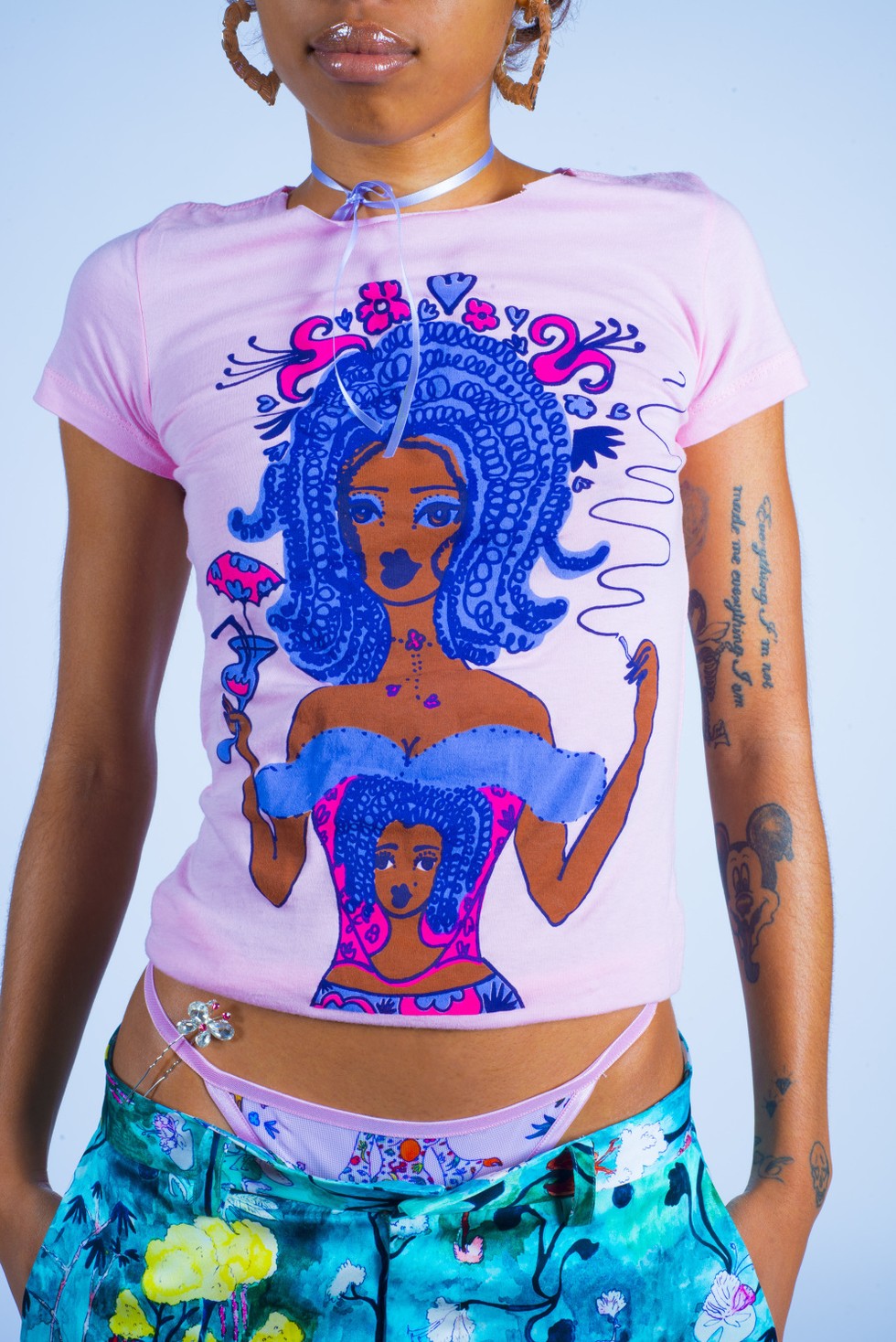 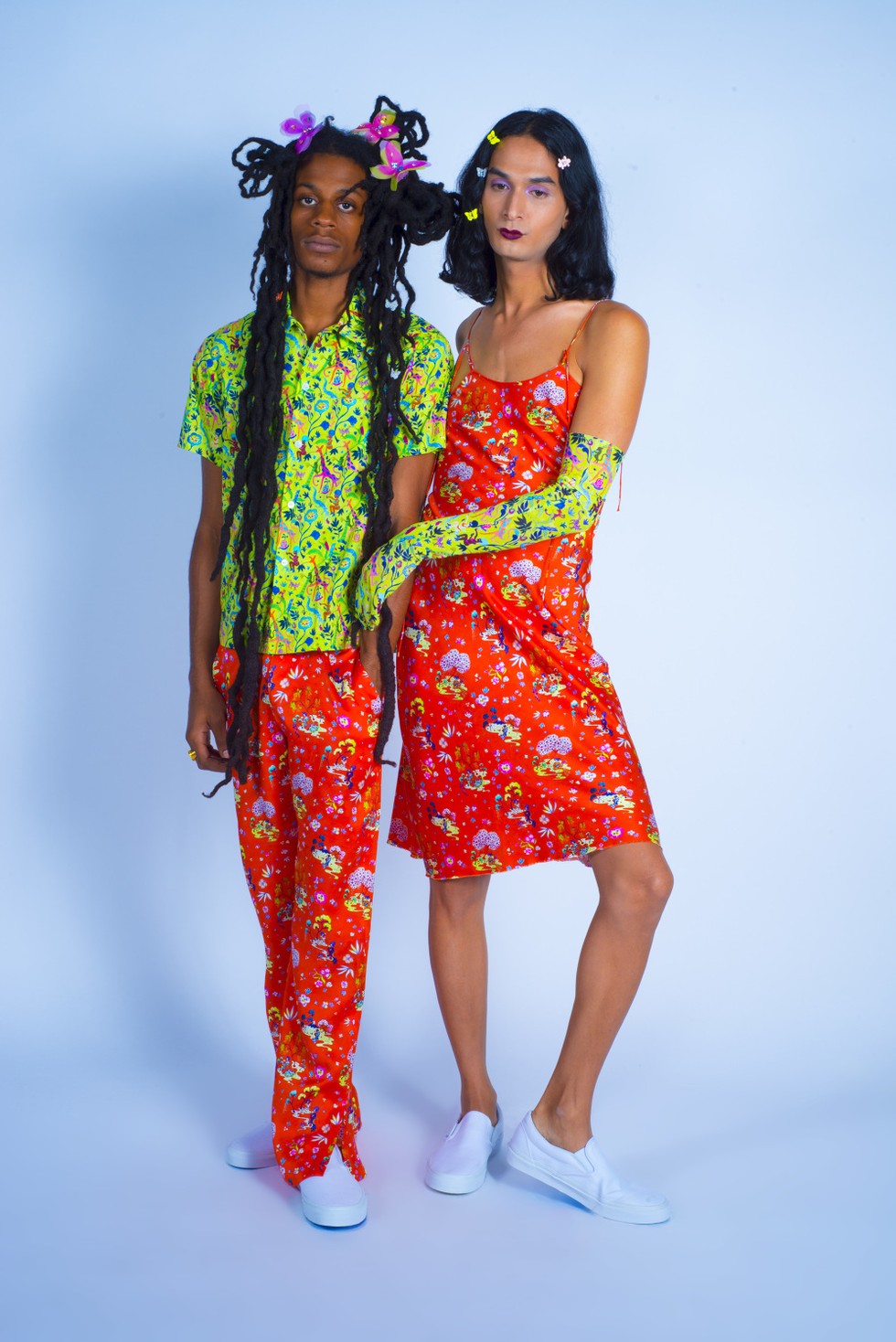 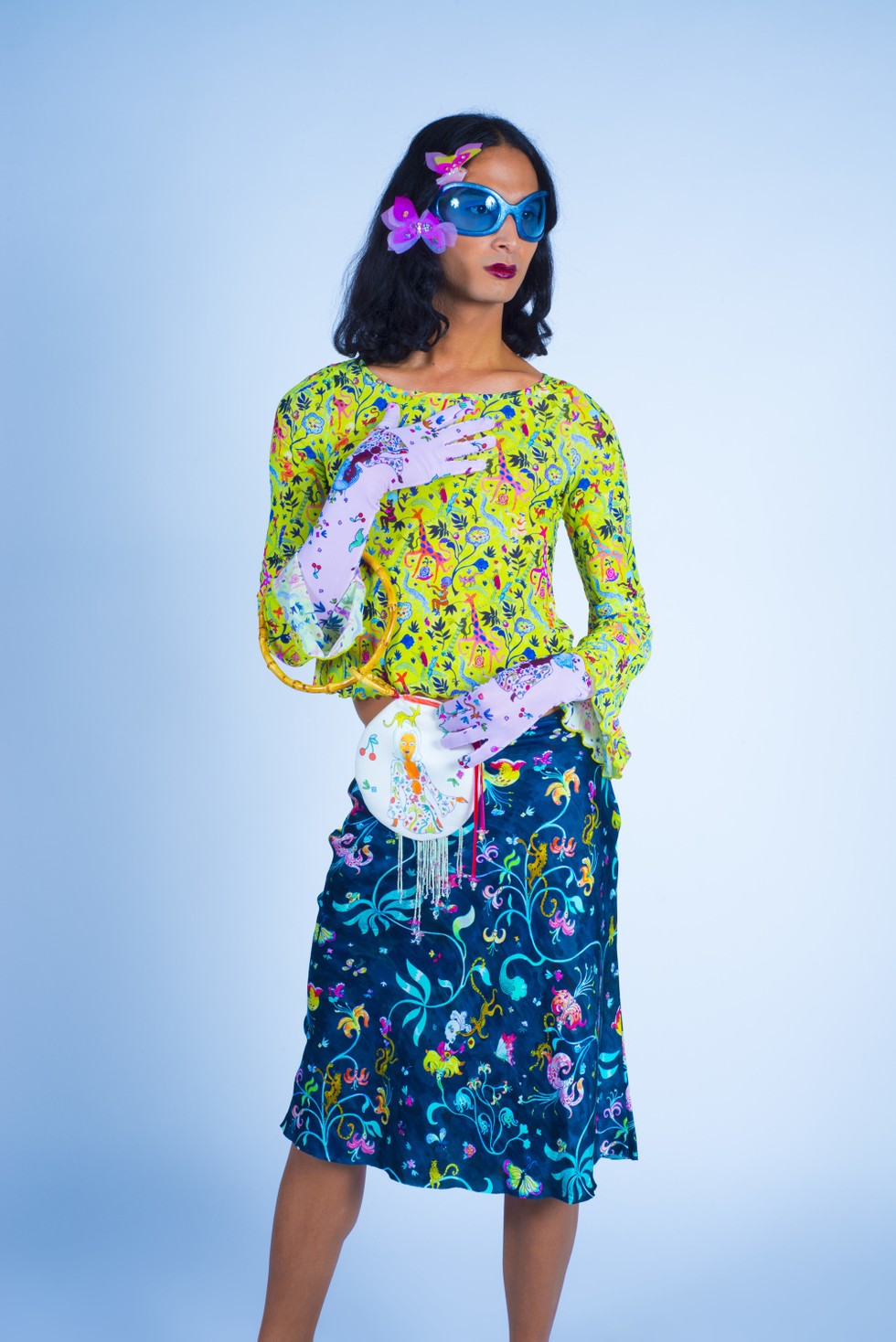 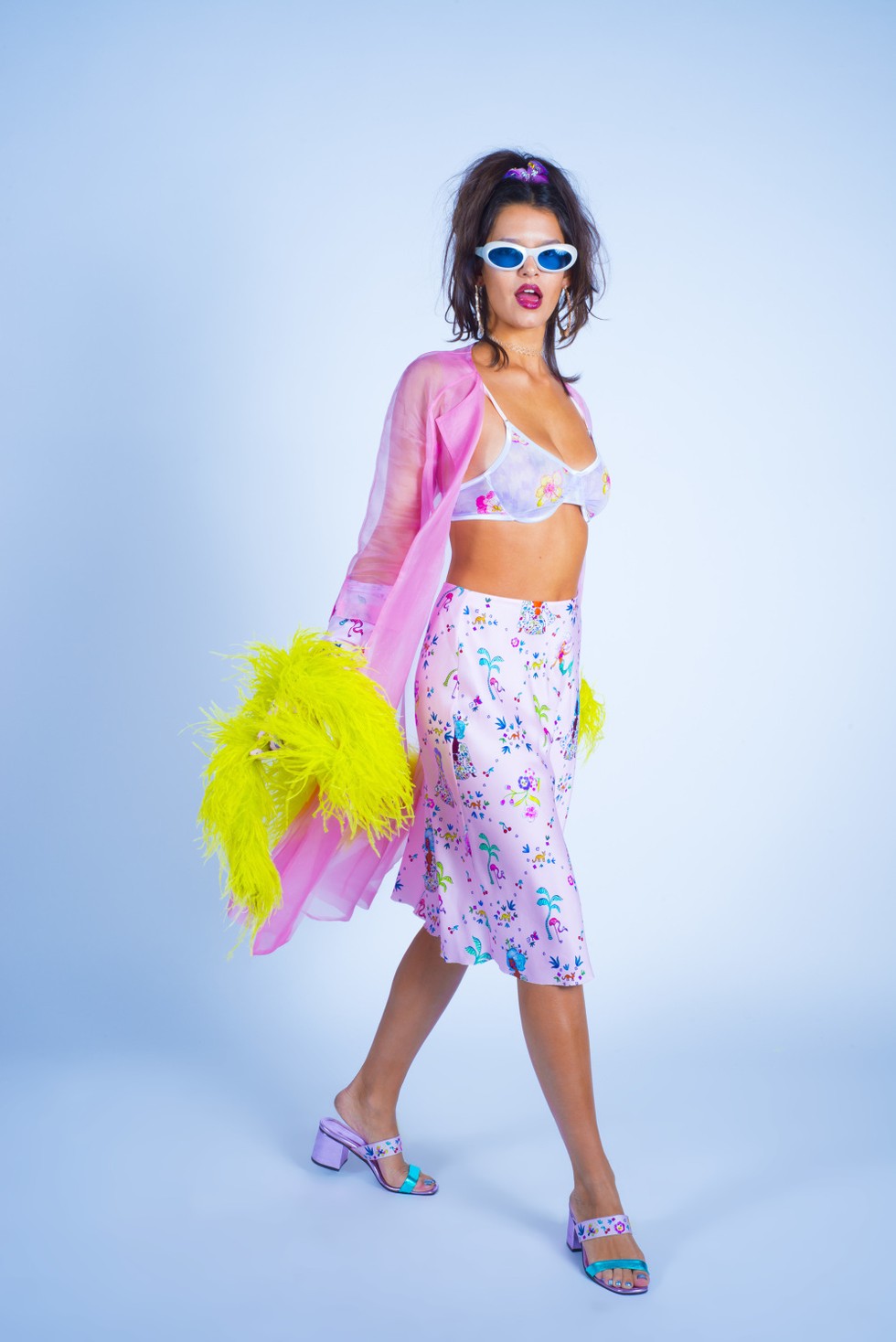 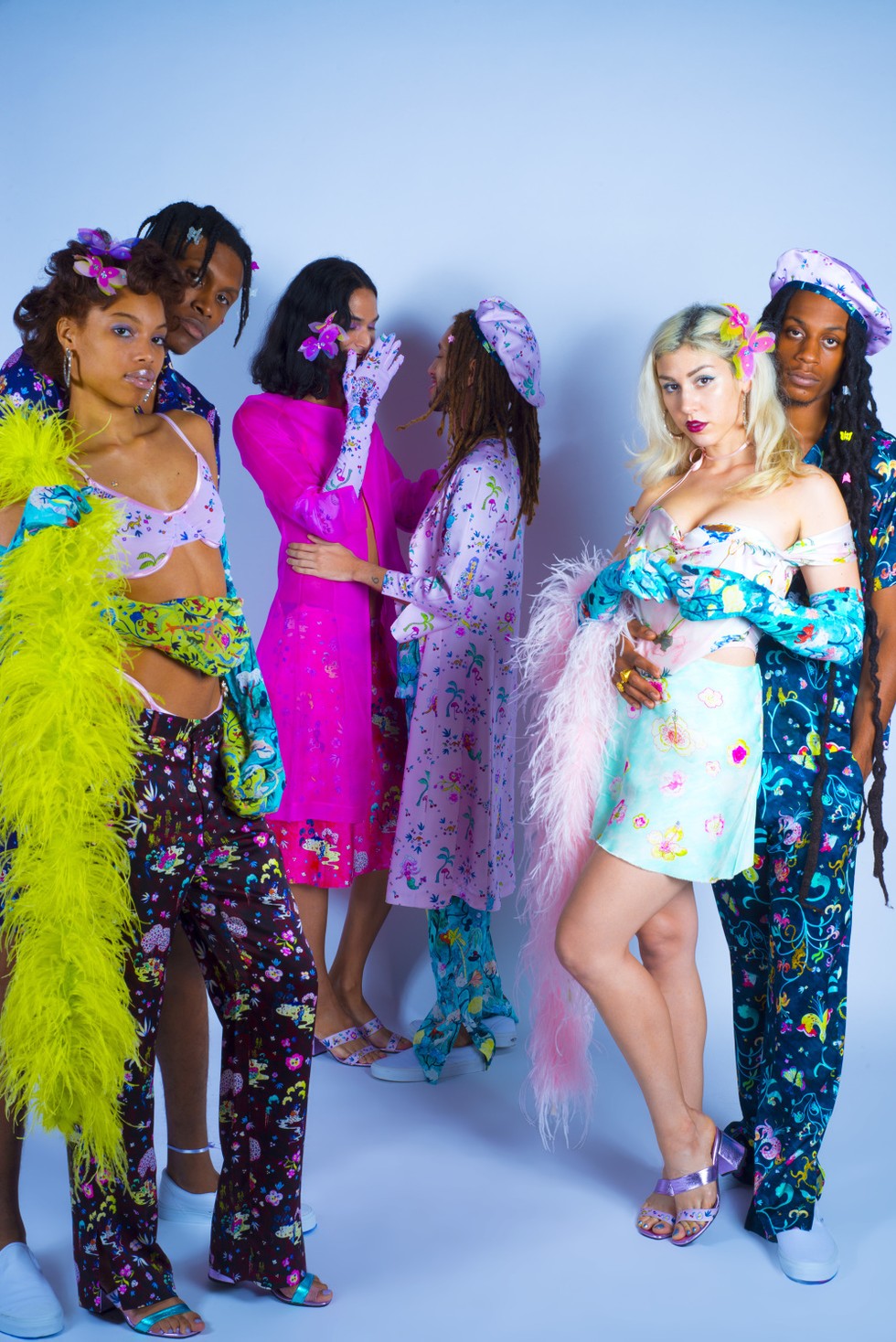 I saw an Instagram of a show you did recently and it looked all sorts of wild -- tell me a little bit more about that?


Tropical Rob is really like a glam shit show. Not a shit show, but it's just a glam…. I don't know what it is. The show [I did was] crazy. We had too many clothes, and we didn't have enough models. So, I used a lot of my friends as models, which is actually ridiculous.

So who is the "Tropical Rob girl"? Or guy?

I like seeing it as blurred lines. Like I wear [my] dresses over pants all the time. But my Tropical Rob girl -- her mom was this total hot bohemian in the 70s, because you know a lot of 90s fashion was directly from the 70s. Her daughter is the Tropical Rob girl. I would say that her "era" is very much late 90's/early-mid 2000's mixed with this imaginary world that is kind of inspired by Dr. Seuss and that one Leonardo DiCaprio movie, Romeo and Juliet, where he's wearing that Hawaiian shirt. Just him and his friends in that movie. And I love late 90s Versace and Galliano in the 2000s.

It's crazy how all that stuff is super big on the Internet now.

Exactly! It's upsetting, but at the same time I do think that what's on the Internet doesn't really represent fashion. There's this weird gap between where the Internet kids are taking fashion and where "real" fashion needs to step up. Yes, Gucci is cool, but Gucci doesn't do it, either. Gucci now looks like a thrift store that's on an incredible budget. It's not at that level. But exactly, Galliano and that entire era is being completely over-saturated on Instagram. The way I see it is that it's sexy. I think my girls..they are sexual, and they stay in tune with their sexuality. But at the same time, the Tropical Rob girl is not a big fan of showing her boobs anywhere. She likes to be sexy, but she likes to twist it with the color and the crazy print. It's almost like dazzled camouflage, in a sense. It's a sexy silhouette, but the prints are so abrasive and crazy and cute. Because, you know, as much as I love sexy, I also want my girls to give face and not be this weird subject of the male gaze.

Right. But also designing to not cater, or deflect, the male gaze is very difficult.

Right! But there are also so many others — the female gaze, the gay gaze. There's all these different kinds of people who breathe down women's neck and make them feel like they have to appear or act a certain way. [But basically my girl works with this] because she is really artsy and colorful but keeps the silhouette really simple and sexy… and very comfortable. She loves silk. She likes mesh. She likes to be feminine, and she kind of likes to look not like she's from another planet, but almost from a movie era or another time. She's the classic "it girl." Tina Turner back in the day…Major.

Someone introduced my clothes once as a love child between the Spice Girls, Gwen Stefani and Jeremy Scott. I thought that was funny because out of all people, putting me in the same category as Jeremy Scott was like… I'm not totally in love Jeremy Scott, but I get it and I don't mind it.

Why do you think people make that comparison?

I think it's about cuteness and displaying this cuteness of pop culture, but in a fashion context, which I think is still a little bit taboo. Not taboo, but not everyone loves it. I don't really like his stuff, but I think that his branding is genius because of the creative direction. I think it's fabulous that he's actually getting people to wear his stuff on the streets. And that's another thing—I want to make clothes that people want to wear, maybe not everyday, but maybe with a mixture with other stuff. I'm not trying to dabble with a silhouette you've never seen before. I'm not trying to get Lady Gaga. I'm trying to get someone who wants to be sexy and comfortable. I never try to invent new clothes. I look at a lot of vintage clothes because I figure that they knew what they were doing more than we did. Now it's all Forever 21. I'd rather look at the old stuff back when dress-making and pattern-making were still very strong.

Let's talk a little about your illustrations then, since they feature so heavily in your work.

I guess I've been inspired a lot by Disney cartoons, those animations, there were very clear rules -- like the eyes look this way and the lips look that way. The draftsmen who did those cartoons were incredible. When I was a kid, I was very into that. I loved the Spice Girls—huge inspiration. But I also loved art...I'm also definitely inspired by different traditional Japanese textiles, Korean textiles, Chinese textiles, Indian textiles, and Guatemalan textiles… I'm just very inspired by everything. My work is such a varied mix. I like neon. I like pastels. I like strong colors. But it's almost like I have this rainbow palette, and I pick every color in the rainbow but slightly distorted. It's a little more pastel or a little more neon or a little darker, you know? It's never just straight red, yellow, green, I think that's lazy.

It's cool too because it looks like you create your own little worlds.

Yeah. But also the really cool thing about my work is that the prints are so crazy that they're actually really flattering on the body because they almost become the opposite of camouflage. It's so distracting that you don't see any, like, back rolls. Girls don't even realize it. They feel a little bit uncomfortable [wearing my clothes], but once they look in the mirror they realize that there's so much going on that all you can kind see is the dress.

Bianca -- who's Baddie's stylist -- her boyfriend is friends with Nellie Blue [one of the models in my show], so yeah....I think she just liked working with me because I'll meet them anywhere, and because I'm chill. But I think she was also just looking for a new designer, but all of her stuff is like B.Calla or Discount Universe.

You did her Grammys gown too, right?

Speaking of inspirations, can you tell me a little bit more about the women in your life who've inspired you.

That's a tough question, as I am known to surround myself almost exclusively with powerful women. Perhaps this is because my grandmother, my mother, and my aunt have all had a strong presence in my life and have inspired my fashion aesthetic a great deal. My nanny Tanya also has great style and big blonde hair that looks a lot like the hair of the girls I draw. I also have so many hot girlfriends, most of whom are incredible artists or creatives...instead of a list, you will just have to see us en masse!

You worked with nightlife extraordinaire Queen Sateen, right? Let's talk a little about how you got embedded in the NYC nightlife-sphere? How would you describe Tropical Rob's ties to the scene?

I am not really in the nightlife sphere at all, especially since I can't dance to EDM and can only really boogie to a good Reggaeton beat. But when I do go out, it's usually to see my friends Sussi, Sateen, and Exquisite. Their looks completely electrify the nightlife scene. I love the way they evoke different eras of drag, glam, and kitsch, yet mix it with their own commentary on these cultures. These rare birds are my refuge from the sea of hot, sweaty, insecure, and some evil young homosexuals and their girlfriends eyeing each other longingly while the club's mafias rule their roosts.