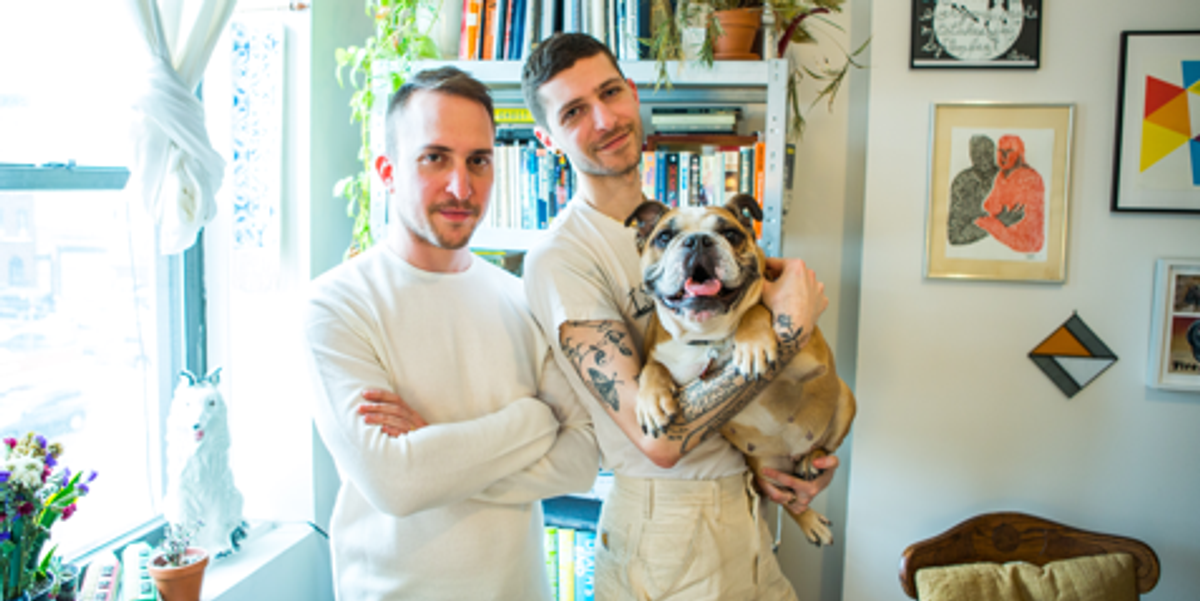 Late last month, President Trump gave his first address to the United Nations. Trump used the U.N. podium to push his "America First" agenda (in front of representatives from over 190 countries). Someone on Twitter likened the spectacle to the comment section giving a speech at the UN. Full of "color," something was missing from the transcript: a call for peace in the Middle East, namely between Israelis and Palestinians. Brokering an end to hostilities in the Middle East, a priority for nearly all past presidents, seems to have largely been left to Jared Kushner.

Stories coming out of Israel and Palestine today are too often about oppression or violence. But there are stories still – especially of young people – on making art, working together, finding common ground, and even falling in love.

Enter Israeli artist Amir Guberstein and New York-born artist Jordan Nassar, who is Palestinian. They're married and producing art that reflects their unique cultural identities. Jordan is showing at Anat Ebqi gallery in Los Angeles through October 21, and both Jordan and Amir have work for sale on Twyla now. We caught up with the pair to talk about how identity influences art, navigating the expectations of different cultures, and learning embroidery.

Where'd you guys grow up?

Nassar: I was born on the Upper West Side; my dad was born here. His dad, who is Jordanian Palestinian, came to the U.S. as a teenager.

Guberstein: I was born in Israel, and I moved to Berlin when I was 21. I got my BFA and MFA there, and I moved [to New York] three and a half years ago. I met Jordan in Berlin. I was graduating when they overturned DOMA, and that was a big part of what made New York possible.

Despite moving from Berlin to New York, your work is primarily focused on the Middle East, right?

Guberstein: Yeah, I moved here and started doing research on independent monitoring agencies that are based in the West Bank — agencies that track everything from human rights violations to the bisecting roads that are only for Israelis. Out of that research arose a body of large-scale abstract paintings based on restriction of movement in the occupied territories. There's a choreography that comes out of the prohibition of movement.

You're also doing some interesting work with hate mail.

Guberstein: Yeah, I've created a small body of work that's influenced by color patterns that are based on excerpts from hate mail and conspiracy theories sent to the East End Temple in Gramercy, Manhattan. It feels so pertinent today when there's so much warping and twisting of reality.

And what about the sand in your art?

Guberstein: I bring sand from my hometown in Israel and sand from the West Bank and I mix it into a compound that I use to make paintings.

Amir's art is abstract, and more of a political commentary on the modern Middle East. Your art, Jordan, is really different – basically folk art – and very Palestinian.

Nassar: There was definite guilt with dating an Israeli. Growing up, my dad was very vocal about Palestine. He's a doctor and does a lot of humanitarian work in the West Bank. As a teenager on the Upper West Side, I thought New York is telling me one thing and my dad is telling me the opposite, so I really tried to just put the politics aside.

When I met Amir, I started going to Israel, and I was also a baby artist. It converged to make me want to do something Palestinian. I was doing crafty, textile stuff at the time, and in wanting to do something that was emblematic of my heritage, I recalled that this embroidery was all over my house growing up. It became obvious that it was a visual I should start playing around with.

I'm Palestinian, and grew up getting birthday cards from my father that were hand embroidered by women in Palestinian. Those cards look just like your art.

Nassar: I learned all about [embroidery] and came to realize there's so much to work with in the medium. I'm only a little surprised I'm still working with it six years later.

I first started copying patterns from books. I learned each pattern comes from a village but I'm not from a village, I'm from New York. So I made up a bunch of patterns that look like Palestinian embroidery that don't exist there as a way for a Palestinian in New York to participate.

What has been the reaction of Palestinians to your work?

Nassar: This past trip was the first time I went to women's centers that do this work -- from a Christian mission shop to a refugee camp. They were all shocked that I'm doing this work as a man. But I brought some samples to show the ladies and they were very impressed with the difficult fabric I was using. One lady in particular told me that I'm good at it because my blood is Palestinian. That made me feel good.

Amir, as an Israeli, how has your work been influenced by being gay?

Guberstein: I had a very easy coming out story. Dealing with the subject matter [in my art] has been lubricated by how easy it has been to confront my homosexuality. If anything, it's allowed my personal demons to be more political than anything else.

As a gay Palestinian with a Muslim father and a Catholic mother, I find I get a lot of questions about how I identify and how I reconcile all of the different components – cultural, ethnic, religious – of who I am. Do you get the "what are you" question, Jordan?

Nassar: Well, identity is something I've just been thinking about. I was just at an artist's residency in Tel Aviv for five weeks and as a Palestinian it's already complicated to be in Israel. As a gay Palestinian in Israel you ask: is it more important to be in a gay space or more important to be in an Arab space? There are a lot of Israelis who feel like, why wouldn't gay Palestinians in Israel be happy that they're in Israel where they can go to gay bars and Pride? A gay Palestinian in the West Bank would have to be closeted. So one camp says I'm lucky to be on the Israeli side and another says I don't need a gay bookstores, it's better to be in an Arab country with Arab context.

I feel it. On this last trip, when I was in Palestine I was told not to wear earrings, to cover up my arm tattoos. It was weird feeling so welcomed by Palestinians, like I was part of their family and on their side, and then thinking I couldn't wait to get back to Israel to wear my jewelry.

How did your dad react to you marrying an Israeli?

Nassar: It wasn't always easy for him, but Amir and my dad are basically best friends. And something he said at my wedding is that he understands his limitations in his capacity to understand, and he's proud of me for not having that.

Amir, growing up, did you ever think you'd be married to a Palestinian?

Guberstein: I didn't think I'd be married. [Laughs.]