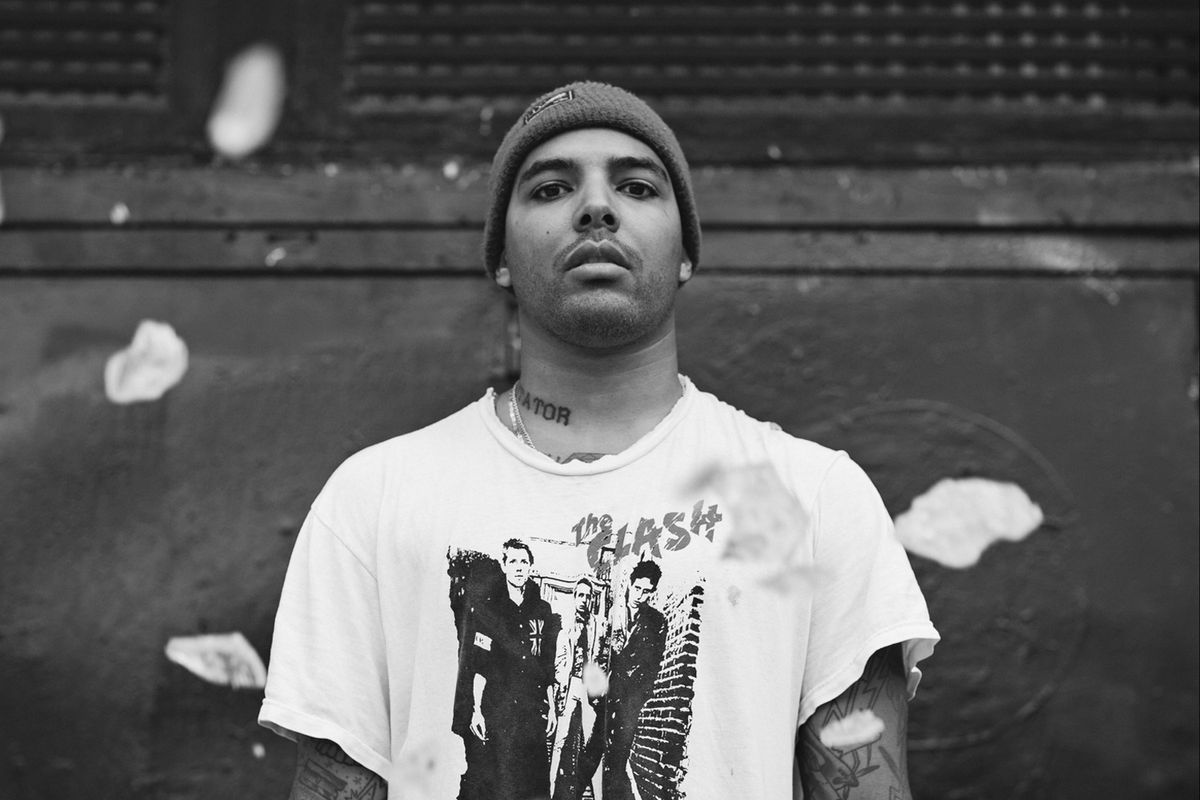 He's got a debut album coming out via Yeezy's G.O.O.D. Music next month.

Chicago-based rapper/singer Nigel "Hollywood" Holt -- AKA HXLT -- was ready the night he bumped into Kanye West at a Chicago bar. After his cousin, DJ/Producer Million $ Mano (who was Ye's touring DJ during his Yeezus tour), introduced the two, HXLT ended up heading to the studio that same night with Kanye where he played the rapper some recorded bars on his iPhone. "We get [to the studio] and he starts playing Watch the Throne, before it came out," HXLT recalls. "And then he was like, 'What have you been up to?' And I was like, 'Actually I've been working on this singing project' and he was like, 'Oh word.'" Kanye approved of his new sound and eventually wound up signing him to his label G.O.O.D Music.

It felt like a long-time coming for the artist who's been steadily gaining traction in his hometown over the years and who's previously worked on beats for André 3000 and Beyoncé. Back in November he shared the first recording he produced via G.O.O.D., "Live to Death," and he's gearing up to release his self-titled debut album, which features Kathleen Hanna and Mano, on February 26th. Like the music HXLT shared with Kanye, the record is all singing and features punk-ish guitar riffs, chants and pummeling drum beats, all of which reflects the artist's longtime love for the genre. His melodies are dark and his subject matter grimly realistic; it delves into his encounters with the police, relationships and finding himself. We had the chance to talk with HXLT ahead of the record's release and hear his thoughts on everything from growing up on the Windy City's South Side to his father's work ethic.

How did you first get introduced to punk music and how old were you?

I was 14 years old. I was watching MTV Jams or something like that and "Rock The Casbah" by The Clash comes on and it's like a fun disco song and I was like, this song is dope! So I went to [music store] Sam Goody and I bought the Combat Rock album that the song was on. I grew up in the '90s when it was like Ice Cube on MTV or it was the head banging metal and stuff like that, but there was no punk ever. I just never ever discovered this type of music so one day, I'm going to cut the grass and I put on this CD and I always played song number 4 and that was "Rock The Casbah." I didn't press number 4 and I just forgot and the first song comes on and it's a fast ass punk song and I'm just like what the fuck is this? It just totally blew my mind, because I'd never heard music that fast before, that hard before, and what they were saying was so real. Like talking about how the police were fucking trying to kill you and all. I was just like what the fuck? This is amazing. And it matched my energy. So when I heard this music it was just like, this is exactly what my heart sounds like.

What was your experience like growing up on the South Side of Chicago?

It was real. Right now Chicago is very popular for the 'hood and everybody is into drill music and all of that shit, but nothing has fucking changed in Chicago. Like every year someone gets shot. It's just covered more because of how the music is or how real the gangsters are, but these are fucking children. They are 17/18 year-old kids with fucking machine guns rapping and barely knowing how to talk and then the entire country is like, oh yeah that's dope, but it's like, you all are listening to children who need guidance. In my mind Chicago is just like everywhere else. It's got fucked up parts and it's got good parts. If you come to Chicago and you stayed on the North Side you wouldn't run into that shit at all. However, if you do go to the South Side you definitely will see it. The difference is Chicago has a very real mentality.

Why did you feel the need to hide your interest in punk music?

I was young and impressionable and I was scared of what people thought. And when you're from where I was from they would definitely roast your ass and call you "white boy." I was just very self-conscious because I felt like, why do I like this and no one else does? I just had a head case if I played this for them. I just knew they wouldn't like it, the way I liked it. But I'm just as gangster as everybody else. I don't get it. My heart loved this music. It wasn't a choice you know. So I would make a CD with Tupac on it and Twista. I would be rolling around in my Lumina and I got sounds in the trunk and you know I would be playing like "Rock The Casbah" and Minor Threat and then my guy would jump in the car and I'd go next station. So I just hid it for a while and then I literally just woke up one day and was like, why the fuck do I care what niggas think? I'm harder than all of these motherfuckers. So I just started dressing different. I started wearing the clothes I wanted to wear. I started wearing band shirts.

What is your creative process when putting together a song?

When I'm about to make a record or something it always comes from fruition. I'll be walking around the house whistling or humming and singing and I'll catch a melody that I like and I'll be like, oh wait a minute I think I just came up with something. I'll take that if it's dope and I'll build it or I'll hear a drum pattern or I'll see an outfit that will inspire me. One of my biggest inspirations is the movies though. I love going to the movies. I see everything in the theater and a lot of times when I'm walking out of the theater -- because a lot of times I focus so hard on watching the movie and it blanks me out -- I start whistling or humming and most of my dopest songs came from me walking out of a movie theater.

There's a lot, but I do have a number one. My favorite movie of all time is True Romance -- it was Quentin Tarantino's first screenplay I believe and every single dope actor was in this movie before they were big, like Samuel L. Jackson, Brad Pitt, James Gandolfini... like literally everyone is in that movie. It's really touching and sweet. It's got a lot of action and it's really funny. It's not just one thing. It's not just a drama. It's not just a comedy. It's everything and it's the coolest movie ever!

Video for "Sick" by HXLT

Can you discuss the relationship between fashion and music and how they inspire one another?

Since I was 14 years-old I was always trying to make little clothing lines and what not. The first line that I ever made up was me drawing graffiti and trying to put it on t-shirts and trying to sell those with my little logo, which was a boom box. Then I made another one when I was like 15 with a panda because I just liked how pandas looked. I always wanted to create clothing so I would always look at people's clothes and go, "If I made that jacket it would be like this," or "that would be so dope if the sleeves were a little bit slimmer." I've always been compelled to make clothing and music. Those are the two things I can do forever and not get tired of.

What were your parents' reactions to you deciding to pursue those fields?

My father is a genius and one of the hardest working men in the world. He and my mom have been happily married for millions of years. I come from a great structure and my dad would always be like, "You guys are fucking up. I'm going to try and teach you all about everything else, so at least you all will be able to get a normal job." So he would make my siblings and me get up at 6am, no matter what, even if we didn't have anything to do that day. He would make us clean and he prepared us for a hard life. He was like, "Well you ain't doing shit so this is what your life is going to be like." He taught us how to lay wood flooring, how to put in windows and put dry wall up. I know how to build a whole house because of my dad. But once he saw that I was dead set on making music he was with it. He just wanted me to be successful and that's what every parent wants.

How has working under Kanye's label inspired you?

I am a "my own kind of person" kind of guy but I'm one of Kanye's biggest fans. What I get from Kanye is the sense of freedom that I need. He doesn't try to hinder me from anything. He just lets me go off the rails. If I say I'm going to jump off the window for my album cover he's like, "Cool." He lets me just make and I love that. That's what it's supposed to be like. Like no one was like, "You can't put this out or that out." I chose every beat on my record and he just lets me be free. So I'm inspired to be free by him.

When you go back to your neighborhood now how do people receive you?

They love me. This is a big common misconception, I guess -- people watch too much fucking TV -- where they think everybody in the 'hood is just standing on the corner waiting. Like, "Yo nigga you not on the block no more we are going to fuck you up, because you aren't in the hood no more." Every real gangster that I know is excited. We need these Gs to be this and that. No one wants to kick it in the hood.