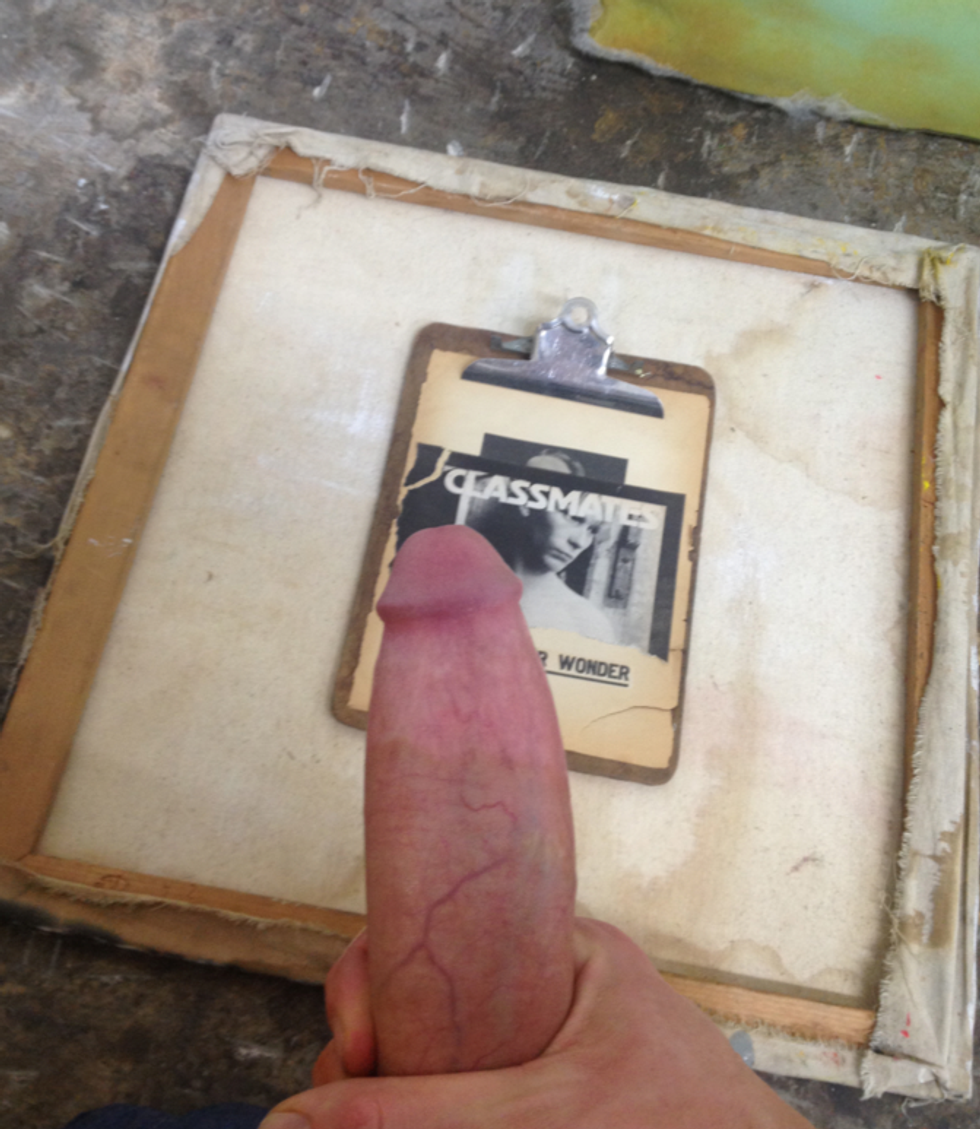 MACHISMO is a collection of self-shot (and self-starring) "dick pics" that artist James Concannon took around the United States of America on his iPhone. The book -- or zine, really -- features X-rated pics in all stages of sexual response and will be released in a limited-edition of 25 copies, which you can snag via Girlfriend Gallery. To celebrate the release, Concannon held a party at East Village gay bar The Cock and shortly thereafter chatted with us about everything from male sexuality and self publishing to dating apps and whether or not size really matters.

Let's start at the beginning -- the first shot in the book is of a baby's heading crowning out of a vagina, is that you?

That is me and my mom and a random doctor's hand.

My dad shot a picture of me within seconds of entering the world. It's

one of my prized possessions. A large impetus of my obsession with the

seed [semen] and subsequent art work is the fact that I am also now a dad. Got a

boy. My dad and mom made my dick and I helped make my kid's dick. I'm

How did this project come to fruition?

MACHISMO stemmed from a few situations and realizations all coinciding within a couple months back. I had increasingly become more and more obsessed with the universality of the seed and was directing a lot of art projects toward that. I was working on a pitch to do a 1930s traveling tent revival in the southern US, actively holding sermons and slinging my seed as the base of a snake oil, explaining to the onlookers that it was from the "north american flesh rattler" i.e. a used ribbed condom of mine. Would've been a fully immersive experience, an RV outfitted as a hoarding christian with a porn addiction, flags displaying a snake half sheathed in a condom, etc... however nobody wanted to give me 10 grand to do it. Then I realized I had these dick pics, and they were free.

What inspired you to take these "unedited dick pics" and turn them into a book?

The book was originally conceived because I needed money. As an artist working in today's market, I do a lot of sales over the omnipresent Instagram. In this vapid platform the tangible currency is a "like" and I kept realizing I would get more likes on selfies than on actual artwork. So why not just sell my dick to these people? It's what they want anyways. Though the initial conception was based on monetary gain, it quickly grew into a much larger activated contemporary social commentary than I could have imagined.

What are your thoughts on dating and hook up apps like Tinder, Grindr or Scruff?

People want to get it in. It's easy. It's shrouded in mystery. Culturally we are delving deep into a cloaked sexual reality, a pre-reformation secrecy, in which we can suffice all our hidden desires through the cloud yet they stay deeply hidden. People think they can say the wildest shit to another person over the internet, yet this would never happen in the outside world -- aka "meat space." Unless you keep it real, then please, express yourself.

Are you on any of these applications?

Of course. They're super interesting within themselves and act on many different levels for me. On one hand I use them to promote art shows in cities I don't live, invite all the babes. On another hand I use them to suffice my personal vanity. I'm a Leo. I dated a girl off OK Cupid once, and we were seriously so fucking alike, and it was terrible. She punched me in the face at a convenience store for no reason then laughed at me. Oh yeah, and nudes. Send nudes.

Why was it important for you to have the book launch at a gay bar?

What are your thoughts on stereotypes about dick size, particularly that you're "more of a man" if you have a bigger penis?

Do people say that to each other? I don't know. I think people can be whatever they wanna be. Have a huge dick but be genderqueer and go by a she [pronoun]. Have no dick but be way more a man than me. I'm definitely feminine in certain aspects of my life and know some guys that are way more outwardly masculine and manly than me, but my dick might be bigger.

Your penis is in an array of backdrops and locations. Where did you take the images?

Traveling around the states doing art shows. I don't really live anywhere, so I just bounce around and stay on couches or friends' beds and take the pics. The best part was at the release a few friends showed up and their beds / houses were in it. Being my friends, they kind of felt like it was an honor.

Was there any particular artistic setup in preparing to take the images of your dick?

Well the first half of the images were created without knowing a book was down the line. They were just standard dick pics. The second half I realized I wanted all the same angle so I kept taking them like that. Its the background nuances that are fun. One image has a tub of ice cream and a bottle of lotion. I'm a diabetic and my blood was low, so I ate the ice cream. Fuck the lotion though, used my spit.

Has your previous work ever explored sexuality in such a candid way?

Yeah I've done a lot of work in the sexual realm. Maybe it's the repressed Christian in me (sold my soul to the lord between the ages of 12-17) but I have all these things I try to address and do so with sexual undertones. However, the real gem of MACHISMO is the almost Pollock-ian quality to it. His drip paintings -- everybody was like, I can do that! Dick pic book. All the boys got them and now are feeling, what the fuck I could've done that!

Was there ever a time you hesitated or were reluctant to share these dick pics in a book?

No, I have a beautiful penis. I will reiterate -- I am a Leo.

Was there any specific intention behind the order of the photos? For instance, we see you orgasm near the end more frequently.

MACHISMO was co-released with Perv On The Go founder Shelby Sells 9/29 in a limited edition of 25.

See NSFW photos from the book, below: