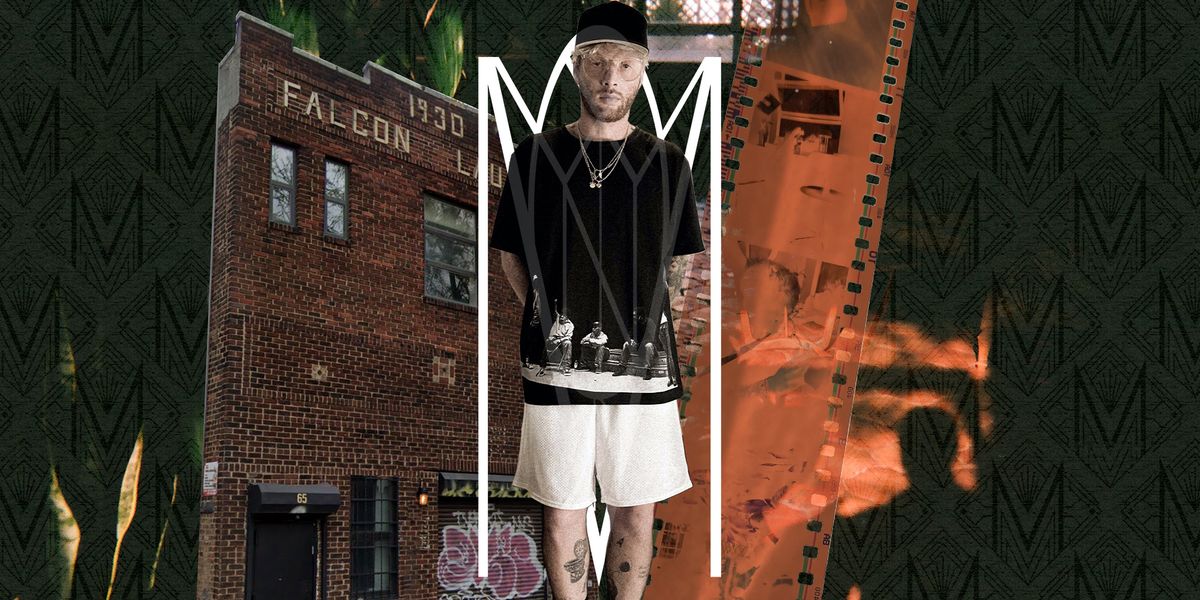 When I arrive at the unassuming Williamsburg office building of Brooklyn artist Snuffy on an October afternoon, I'm surprised to find an immaculately curated studio inside. I'm immediately enamored with the space, the people, the plants, the vintage furniture and *chef's kiss* textiles. Morwin Shmookler's Office, as the space is known, has wall-to-wall seating booths, light fixtures from every notable artistic era and a repurposed bar turned reception area with a seemingly endless pizza supply. (Snuffy's birthday was the day prior to our meeting, so the pizza was plentiful — maybe don't expect a slice, but just like your loving grandmother, Snuffy and his team are going to make sure you're taken care of.) There are a few vintage family portraits on the wall, some of his grandparents and some thrifted. Various pieces of artwork fill the studio, my favorite being the resin-cast humanoids made by Snuffy's mother. All-in-all, Morwin's is by far the chicest studio I've ever visited, and better than most Brooklynite thrift shops.

Snuffy and I actually first met on the set of PAPER's Pete Davidson Break the Internet cover shoot last year. On the day of the shoot, Pete had invited a few close friends to hang on the sidelines – Snuffy being one of them. At this second encounter, my memory clicked when Snuffy pulled out the red racecar bed that we had used on set, which he has stored in the utility closet at Morwin Shmookler's Office. It's a small world, folks — the smallest big city in the country.

In anticipation of our meeting, I had prepared a series of questions that one would ask a tattoo artist: How long have you been tattooing? What inspires you? Client pet peeves? What's your favorite ice cream? However, after being introduced, I quickly realized there wasn't going to be any sort of formal interview with cookie-cutter answers. Snuffy is a genuine and personable human, who anyone can get along with. Having an in-depth conversation and sharing a multitude of life experiences was more than I could have anticipated from this meeting. He's an open book when it comes to his past, how he got his start, and where he wants to be.

Snuffy started his professional career in real estate, in his late teens. After a few years he realized that wasn't the life he envisioned for himself, but he'd become friends with quite a few famous faces through his work and properties he controlled. In the two and a half years he's been tattooing, Snuffy has inked the likes of Pete Davidson, Machine Gun Kelly, Kaia Gerber, Ricky Velez, Tommy Dorfman, Swae Lee and many more. What's more astonishing than an ongoing list of celeb connections, in my opinion, is that he started drawing and creating art just about a week before his tattoo career started. His realist illustrative style and approach to tattooing is immaculate — to be that refined in such a short period of time is truly an impressive feat. Snuffy works exclusively in black and white, which gives him an edge in rendering shape and form, while also perfecting his craft. For those who are interested in getting a tattoo from him, his favorite things to create are humanoids, out-of-the-box subject matter and personal stories that he can convey into visual masterpieces.

Everyone who gets inked by Snuffy is required to write a story or message, which he then uses as a baseline and turns it into a visual work of art. "I design them for myself," he says, as if each unique piece would be a tattoo he would put on his own body – a sense of drive and inspiration in each one. In my own past 10 years of getting tattooed, I've never really encountered an artist who puts so much love and care into their work. Not only is Snuffy making the piece for himself, he so very much wants you [the client] to love it as well, and to see his vision — what each aspect of the visuals represents.

Snuffy's work is nothing shy of fine art. As tattoos go, they remain on your body in life and death (unless you get cremated or something). So naturally, this art form should be treated as something that is highly valued and respected, much like fine art. He has translated his work to installations that he intends on using in a gallery setting, that for the time being grace the walls of his studio. Layered glass panels in an iron tempered frame, lit up to display various selections of his creative compositions. His style and notoriety have attracted collaborations with many different outlets, including a collection with Coachella x Calvin Klein, Machine Gun Kelly's album artwork and merch for "Hotel Diablo," as well as producing music which I had the pleasure of listening to in the studio.

Snuffy has partnered with photographer Marcus Russell Price, who captured recent protests around the country surrounding Black Lives Matter and widespread social justice (or injustice, rather), and made t-shirts which you can find here. All proceeds from these sales go directly to Little Flower NYC, a NYC/Long Island-based charity that works to improve the well-being of children in foster care and their families, as well as people with developmental disabilities. "It starts with the kids,'' Snuffy says, adding that the younger generations are the future of this world and they need our support. Purchasers of the shirts will be entered into a sweepstakes following the end of the sale to win a complimentary tattoo by Snuffy.

He's currently working with a team of tailors, a connection he has with a former designer of Ralph Lauren, to create a custom collection of sweatshirts and pants that follow the brand and culture that is Morwin Shmookler's Office. This shop has become an entire brand identity, and follows an art deco-inspired style guide. From the monogram to the marketing, you see a beautiful through-line of design aesthetic (I have a degree in graphic design, and this guy makes it look so easy).

Unlike your average "Blood and Dagger" tattoo shop, he remarks, Morwin Shmookler's Office is an establishment of fine taste and good people. The shop, open as of November 2, sits above the restaurant formerly known as Falcon Laundry, which he intends to revamp and use as the primary studio — while the upstairs would be for personal and exclusive use. The building itself has as much character as its inhabitants, and I personally can't wait for the rest of New York and its visitors to experience it.