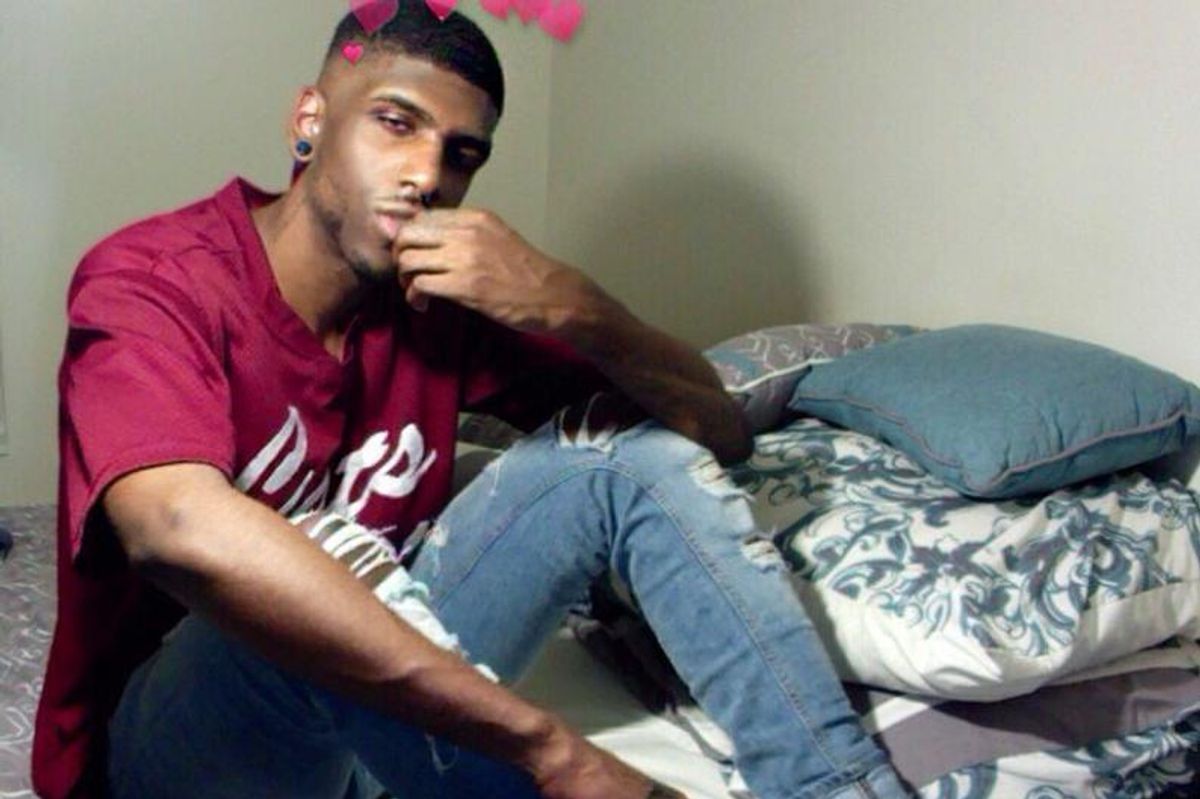 Meet Rihanna-Favorite @FUCCI, the Most Influential Person In Fashion You've Never Heard Of

"My family, my friends tell me I have a succubus living inside me, so really, I just dress her."

Farren FUCCI is probably the most influential person in fashion you've never heard of. The pseudonym of 25-year-old Atlantan who appreciates a hoe for being a hoe (and yes, that includes Melania Trump), there aren't any vanilla lookbooks full of sponsored items here. FUCCl instead draws attention to pieces via Polyvore collages. But he has a very particular aesthetic: the women he dresses makes every single man around her whimper in fear; she's bad bitch whose looks aim for high drama with a tough edge sans effort.

His keen eye has earned him a vast following on Twitter and Instagram, with even Rihanna counting herself as a fan -- a move that also led to him landing a job on Diddy's creative styling team, The Fashion Mansion Group. We chatted on the phone about his inspirations, goals, and how he plans to become the next Yeezy.

You use a pseudonym. Why is that?

I go by Farren and one of my favorite brands is Gucci, and whenever someone used to wear fake Gucci they used to call it Fucci, so it works. I'm more street, I have kind of urban aesthetics; most people who wore Fucci were in urban communities. It's kind of part of my brand now.

How did you get into fashion?

Definitely from the women in my life; my mom would not even go to the grocery store unless she had some heels on. I was styling my sister's Barbies and hoe looks at 5. I would tell her, "That skirt's too long. Let's get these scissors out and cut this." I don't even know why I was thinking about how fashion needs to be more scandalous at such a young age.

How did Rihanna find your work? Has she helped you in any way?

Rihanna probably is the reason I have my followers, to be honest. When she first followed me I was only at 2,000 or 3,000? Right after she followed me, it started sky-rocketing. She was posting some of my fashion collages and, of course, she DM'd me a couple of times and said some nice things about my sense. I hope that I get to work for her one day. Honestly, she's the one who pushed me to keep doing wardrobe styling because when I would DM her, she would be like "You have a great eye and hopefully I'll work with you one day." That really motivated me and working with her has become one of my goals. Honestly, she's the reason that my Twitter turned into a fashion blog, because she started telling me to post more looks.


Has she ever been influenced by anything you've posted?

Not a full look, but definitely pieces. The most recent one, I believe, she wore a Louis Vuitton ... well, it's not Louis really, but it was made out of Louis Vuitton. It was Super Creep, a brand called Super Creep -- she had the hat on just walking into the store. I don't know if it's coincidence or not, but I definitely told her to wear those Balenciaga All Time boots, and then a couple of days later she was wearing them! She's always told me that she goes to my looks to steal and look at stuff. Who knows? She hasn't really confirmed that she got it from me, but it's something my spirit tells me.

When making your Polyvore collages, do you have certain figures in mind for who you're styling or is it just what you like or you think this would look good on someone?

This is probably going to sound weird but my family [and] my friends tell me I have a succubus living inside me, so really, I just dress her. . She probably has Aaliyah's hair with Rihanna's eyes, and Bella Hadid's body. It used to be Rihanna, but it kind of evolved, because I was kind of getting stifled. I realized all my looks were the same. When I started going with my random own girl in my head, just dressing her different kind of ways, [it] opened up my horizons to different kinds of looks

Who are your primary fashion influences?

This is hard because I don't want to look like anyone else. Rihanna, Kanye West, Kendall Jenner… Dennis Rodman's a big one. That's probably weird to a lot of people. Anybody that takes risks is an influence to me, like Rita Ora. A lot of people thinks she's hit or miss, but I think she just takes risks and people don't get what she's giving in her vision sometimes. But I get it.

If I want to be successful in this industry, I need to be able to work with many different people, so I try to pull inspiration from literally anything and everything. I guess the most [inspiring] would be John Galliano for Dior in like 2004 or 2005 -- when he was really into the monogram looks. I do like a little matchy-matchy, but with accent colors here and there. That collection itself inspired literally everyone else.

How would you describe your own style?

I always call it Euro Trade! [Trade is gay slang for a masculine looking gay man]. Basically, I like Europeans—they don't mind wearing [things] a little more fitted. I might wear something really tight, like a crop, but wear some drop-crotch jeans and some Jordans. That's why the trade comes in, because a lot of people don't even wear Jordan stuff anymore, but I'll never give them up.

Do you think you would have got to where you are now without the assistance of social media?

No, honestly. I'm thankful for social media. I was living in Greensboro, NC where people still wear Sperrys. I was in California at one point, but I left there at a younger age. We didn't even have Abercrombie & Fitch. We had Aeropostale and American Eagle, so that's literally all people wore. Without social media, I probably would still be dressing like that.

You're relentlessly outspoken about the contributions global black cultures have made to fashion. How do you plan on representing this in your own styling work?

I'm going to be able to start doing my own shoots. I'm mainly going to use African-American models. All different colors because a lot of people assume that I only like the lighter skinned women. I've gotten a lot of comments about that. That's mainly because my big sister looks like a lot of people that I post. It's kind of like a reference to that because I'm really close to her. It's not necessarily like a preference thing. I'm gay, you know? It's just that's something that I'm more familiar with. I'm a gay African-American male and I've experienced a lot of discrimination and low self-esteem is a huge problem when it comes to women, especially black women, I can totally feel where they're coming from.

What do you have planned for the FUCCl brand?

I'm about to style a music video, which I'm so excited for, and photoshoots, of course. I'm really just getting my feet wet. I skipped a lot of steps because I'm styling some pretty cool people! I want to get into music because I know how to rap a little bit, and I dance. I've been writing some songs, just like a little five song EP. We haven't had a dancing rapper since Heavy D, and Chris Brown is out there and he's doing it; but we haven't really had someone that dances full out and raps since Heavy D.

I also want to style costumes for video games because I'm a big gamer. I would love to be able to have my own video game or just do the costume and wardrobe stylings for video games. I'm pretty good with a camera, so I'm going to start doing photography. I really just want to be a creative director. Honestly, I want a brand that's more with a personality than with what I do. I want people to say "Whatever he does, it's good. He's a good person and we're going to support him."