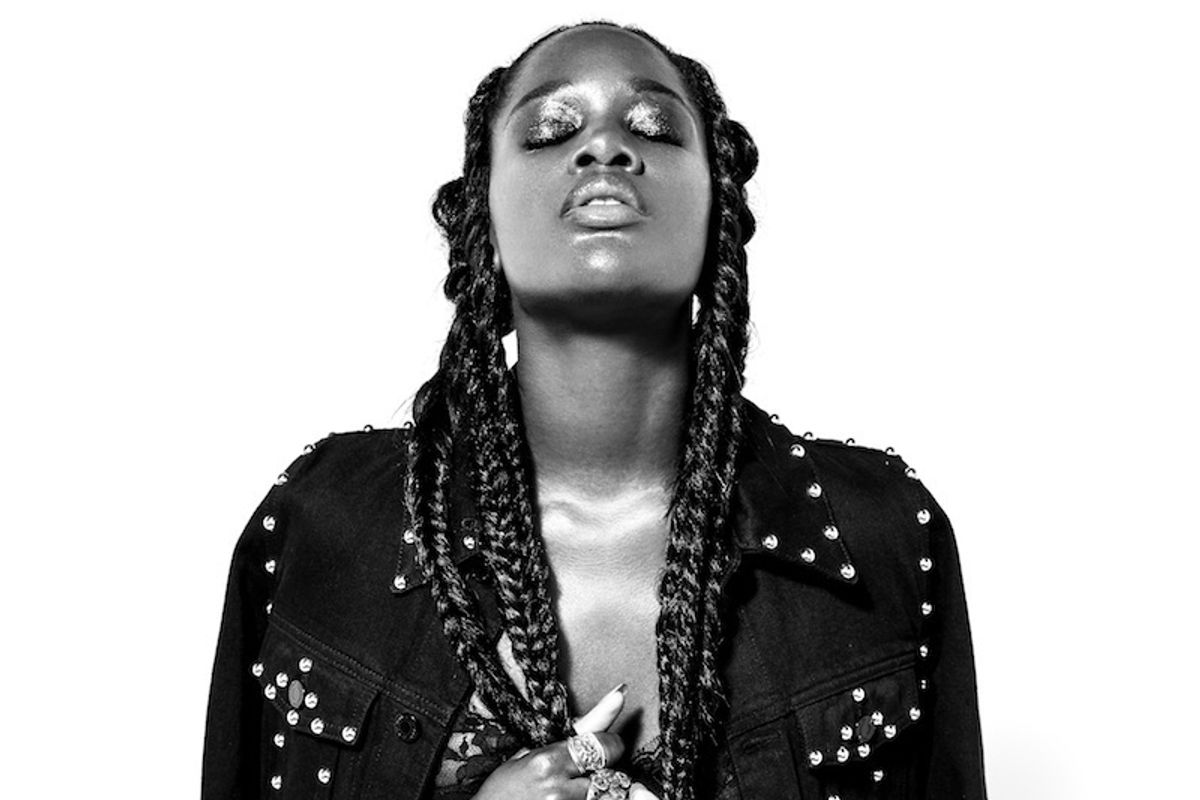 Meet the new singer / songwriter you should be listening to now.

You may not be familiar with Oyinda yet -- as the singer / songwriter began her career by snagging a coveted spot performing at Lollapalooza -- but even as a fairly fresh artist, her range and ability are not to be boxed. Her Restless Minds and Before The Fall EPS are all testaments to Oyinda's unique and ever-changing musical tastes, which are all anchored by an inimitable talent that effortlessly oscillates between static beats and sultry hums.

It's truly a crime that more people don't know her work especially because Oyinda is about to blow up. So we sat down to speak with her about finding and owning her space as an artist as well as her hope to one day collaborate with Andre3000 (even if that just means she's playing the triangle). 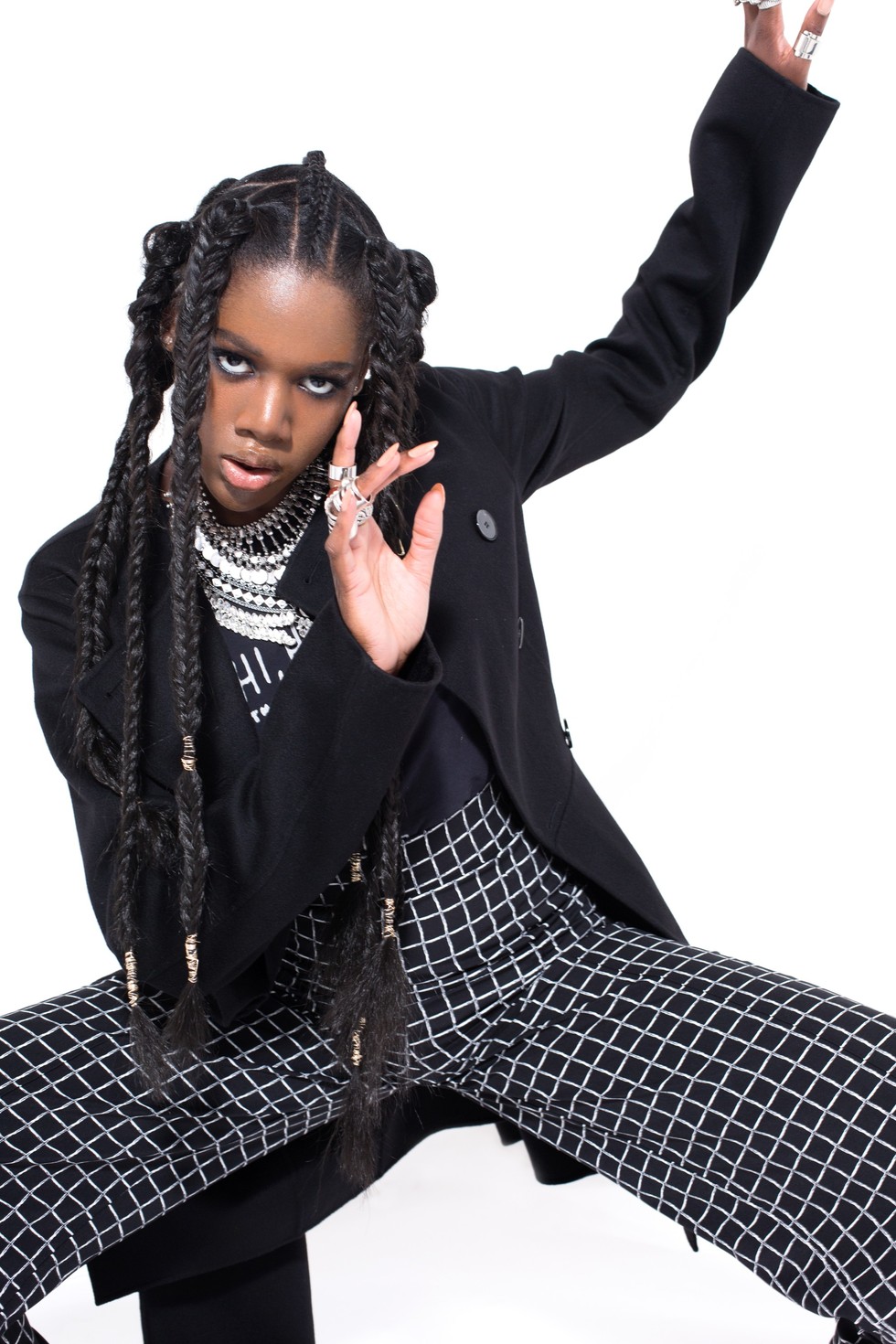 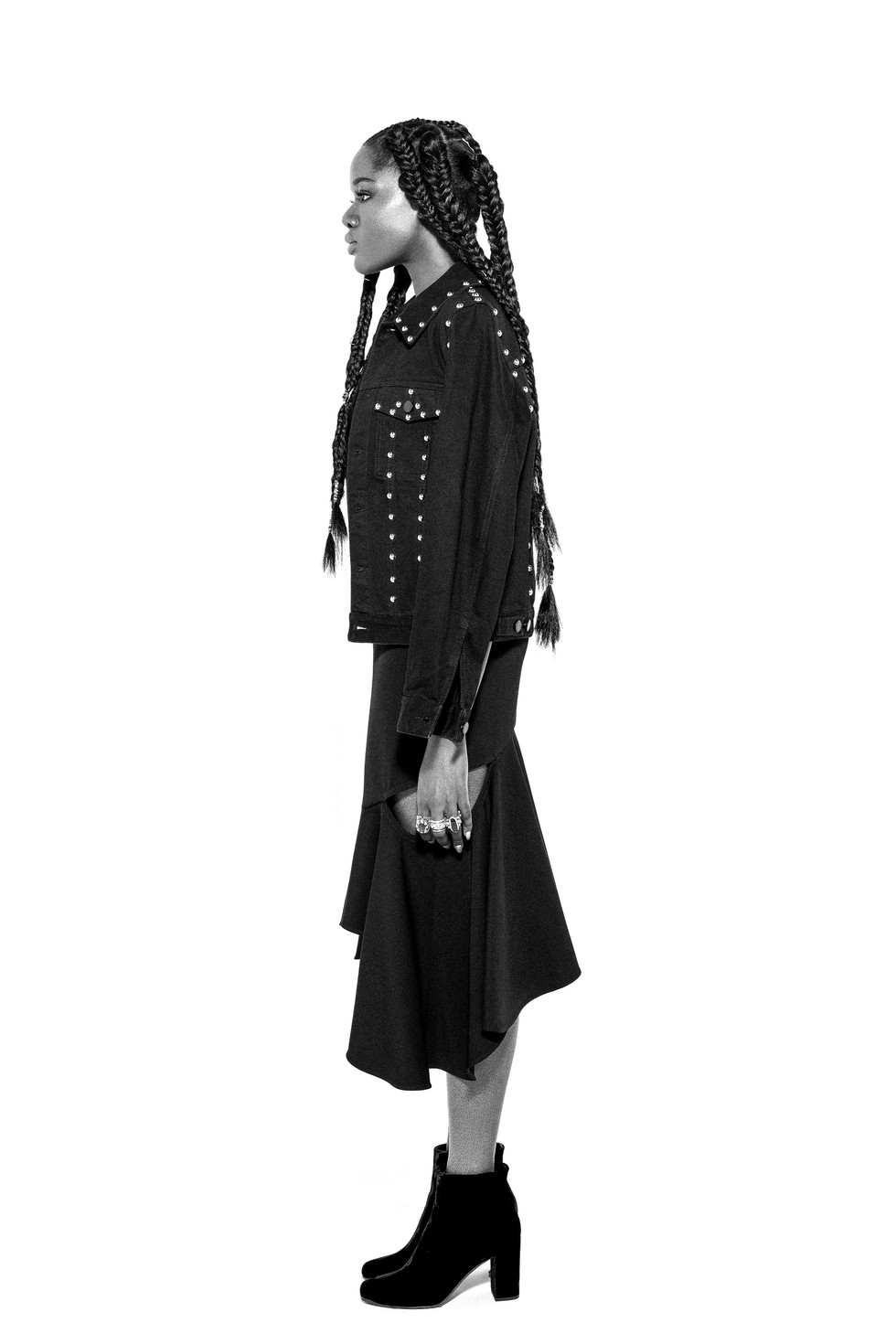 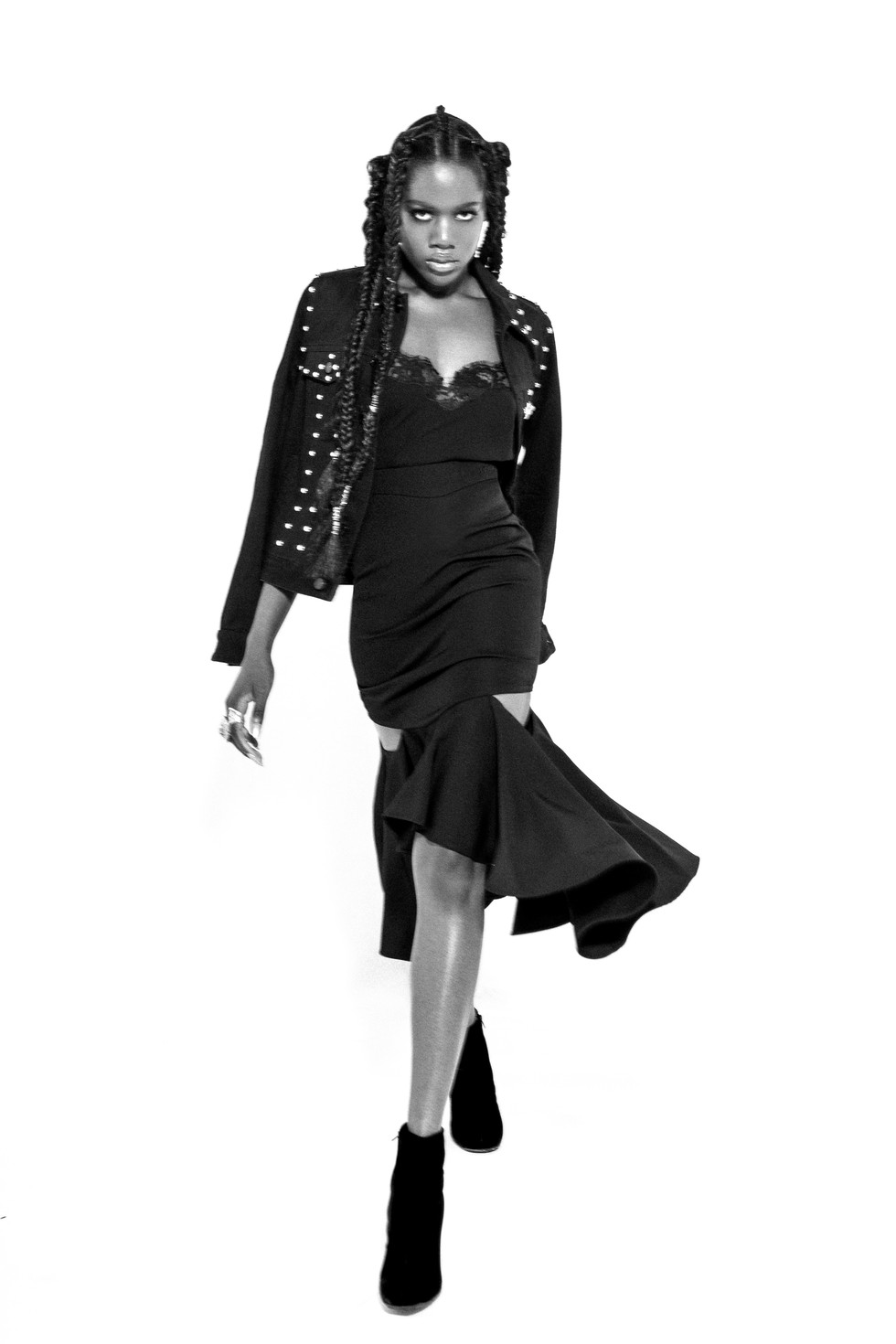 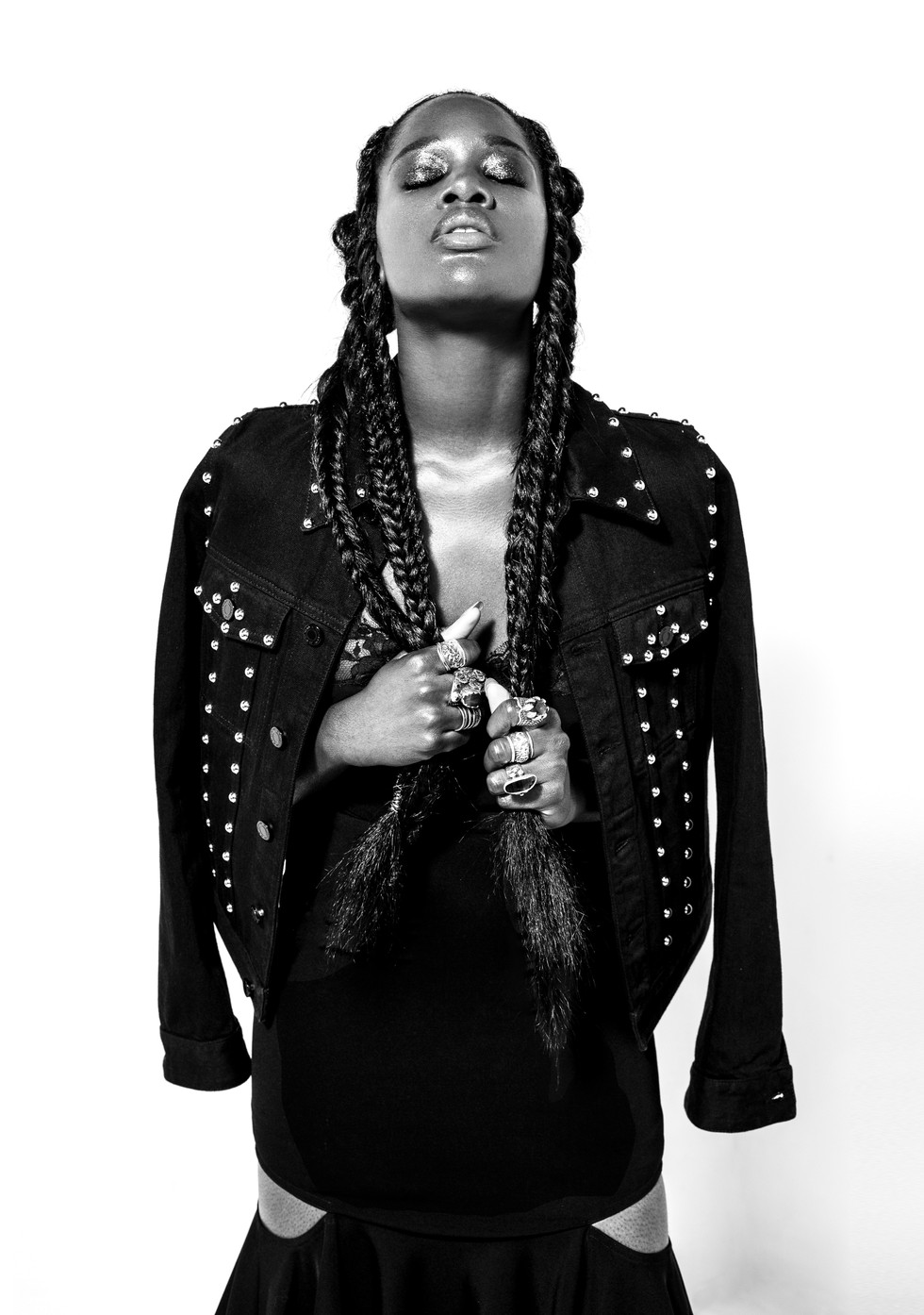 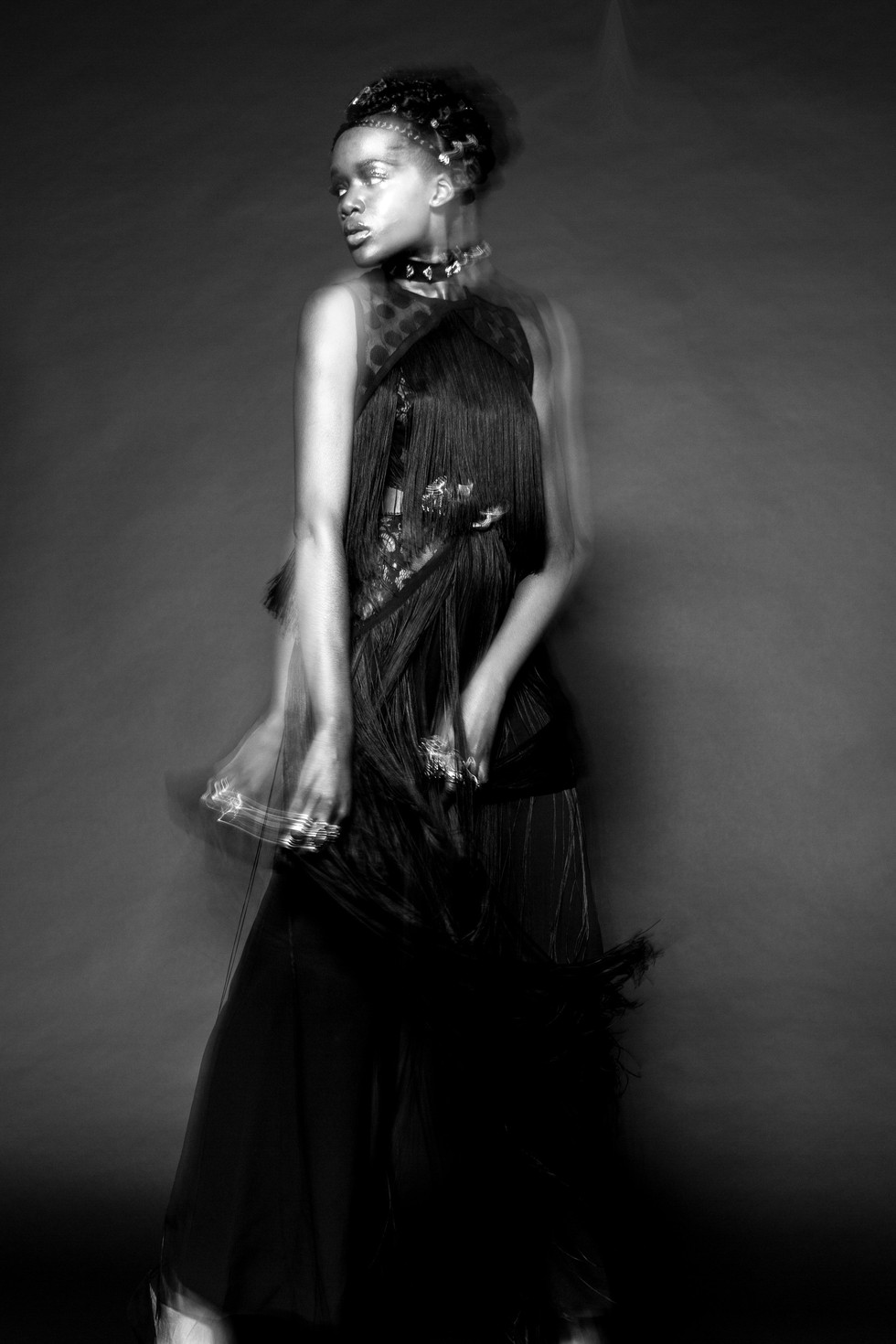 Oyinda wears a jumpsuit and choker by Ellie Saab, shoes by Kurt Geiger 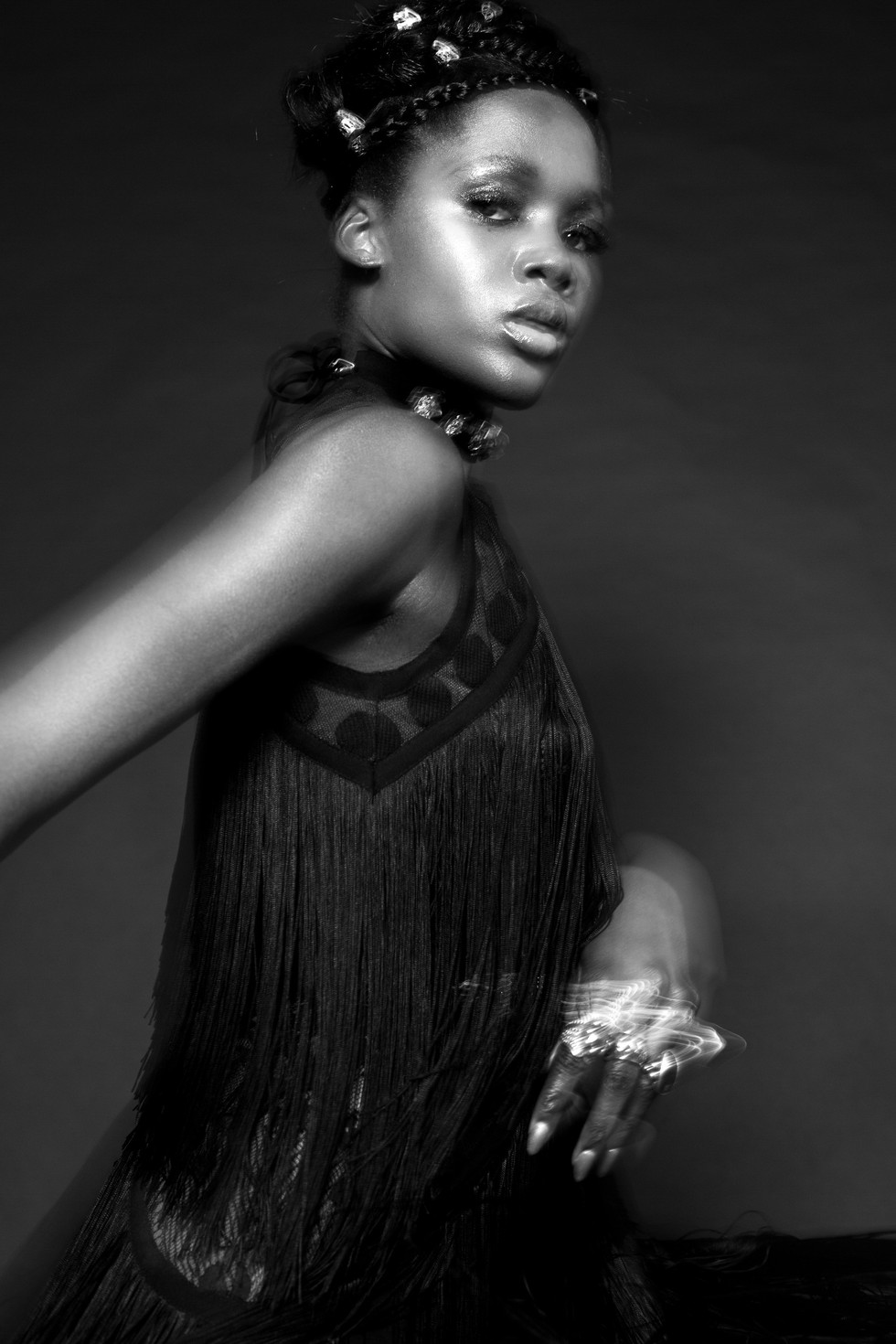 You seem to be occasionally mislabeled -- which can be so limiting especially considering your unique sound and aesthetic. How would you define your musical style, if you want to define it at all?

Yeah, I wouldn't classify my music, that's partly why I put it in the 'alternative' category. It's pulling from so many things right now as a singer / songwriter in pop, rock, RnB, RnB soul, electronic. It's just pulling from so many different things, even ambient music. I understand the comparisons to FKA twigs and it's not a bad thing, she's an incredible artist and the artists I've been compared to are incredible artists. It's humbling and eye-opening to see what people are seeing in me. I'm shocked by it myself but I feel like why would I? I'm just trying to grow in what I'm creating and take myself elsewhere. I don't really think of [my music] as what genre I'm trying to make but more of what kind of mood I'm trying to create.

You tend to take most of the ownership of your career and your creative process. You even have your own record label, Blood & Honey. Obviously in a sense other people are involved, but what made you decide to tackle so much on your own?

I already put out my first EP independently so it just made sense to continue to do so rather than remain nameless. Then I decided to call my own entity Blood & Honey because I felt like that embodied the vibe that my projects were going in and what I've always strived to create in my music. It's not about the scene or the genre, as we previously talked about, it's just about that vibrance that music makes you feel and that richness. when you fully listen to something and what you take from it and what you can regurgitate into the universe and that's all I'm trying to do. I've learned so much from other people that I look up to. I feel like every form of creating is just what you've learned and how you view yourself. It's a balance. I think we being independent is part of still trying to explore without any walls, this boundless and effortless exploration. I don't want to write about the same thing. I don't want to do the same thing. I'm sure my sound won't be the same. I started already working on my 3rd ep and I know where I'm going and I just want to vibe.

Can you talk to me about your affinity for black-and-white photo and video shoots? What attracts you to this color scheme, is it purely an interest in aesthetic or something more deeply rooted?

I feel like black-and-white just fit especially for my first EP. It fit the mood and the overall aesthetic. I felt like it was timeless and kind of stuck in a way. I can't remember the exact movie I saw, but they're stuck in time and it was black-and-white. That's usually used for a memory or going back in time, and it's just a classic and I wanted the mood for the first EP to stay that way. If I'm transitioning into color I wanted it to make sense within the project. I wanted it to have that forced black-and-white imagery because it's such a nice duality to listen to everything and it have such a vibrant tone and you see so many colors but you're stuck with this black-and-white. The viewer is inclined to paint their own picture.

How would you describe your musical growth since your first EP, Before The Fall?

I've become less OCD but I really haven't. I think my growth would be dealing with the lack of structure and forcing myself to have different forms and just follow where the music is taking me. A lot of the time I would just let the score of what I was trying to portray and that underlying tone guide me in my writing and in the way the story was going. I definitely became more visual and I think that's also partly why I started directing my own videos and really putting myself in every aspect of my career, from photos to anything I'm putting out. On shoots I like to pick not only my styling but the way it will be shot. I mean it can be difficult working with others and I never want to step on anyone's toes, but that was part of my growth to try and put everything out there.

Even though you tend to orchestrate a lot on your own, are there any upcoming collaborations or people you would like to pair your voice and vision with?

There are a ton! There are so many people I am a fan of. I once joked, I would play the triangle or just hum a note on anything that Andre 3000 put out and be fine with that. I would work with him in a heartbeat. Listening to Frank Ocean's record now it's definitely my favorite. I'm a fan of both of them but what he had to say was literally how I had been feeling for so long. I feel like it speaks to so much of how I feel when I create. I couldn't have said it better myself. There are those times when you wish you said that and you wish you could have articulated it that beautifully. There are so many people I'm fans of that do that. Vince Staples is another. I love the grit in his records and the producers he works with. His latest record, Prima Donna I've been listening to is insane, it's beautiful. And Kanye, there are so many.

Just because I love the feeling of that collaboration, to walk into a room and know what I want and how to voice myself before going into a room with anyone else. I don't want anything to be diluted. I don't want to lose track of myself with the project. I'd like to keep the integrity of where the sound is going, which is a tricky thing.

So you're coming out with a third EP to bookend Before the Fall and then Restless Minds. When would you hope for the third EP to come out? How are you hoping to complete this trinity?

I have no idea when it's coming out (laughs). I approached these EPs like this weird venn diagram where they interact just a little bit and tie into each other in a weird way. Specifically with the last track from Restless into Serpentine, that imagery there was purposeful and I think whatever starts this third EP is going to be purposeful, which I just have to figure out. I'm trying to make a weird short film that are three different films that are all about the same thing but not quite. I have been playing with this idea there's a full concise story there, but it's like the tree of life where there are so many different parts of time but it's all one story. I don't know how it's going to go! I have two songs from this that I wrote years ago. I don't want to give too much away but I'm really excited.