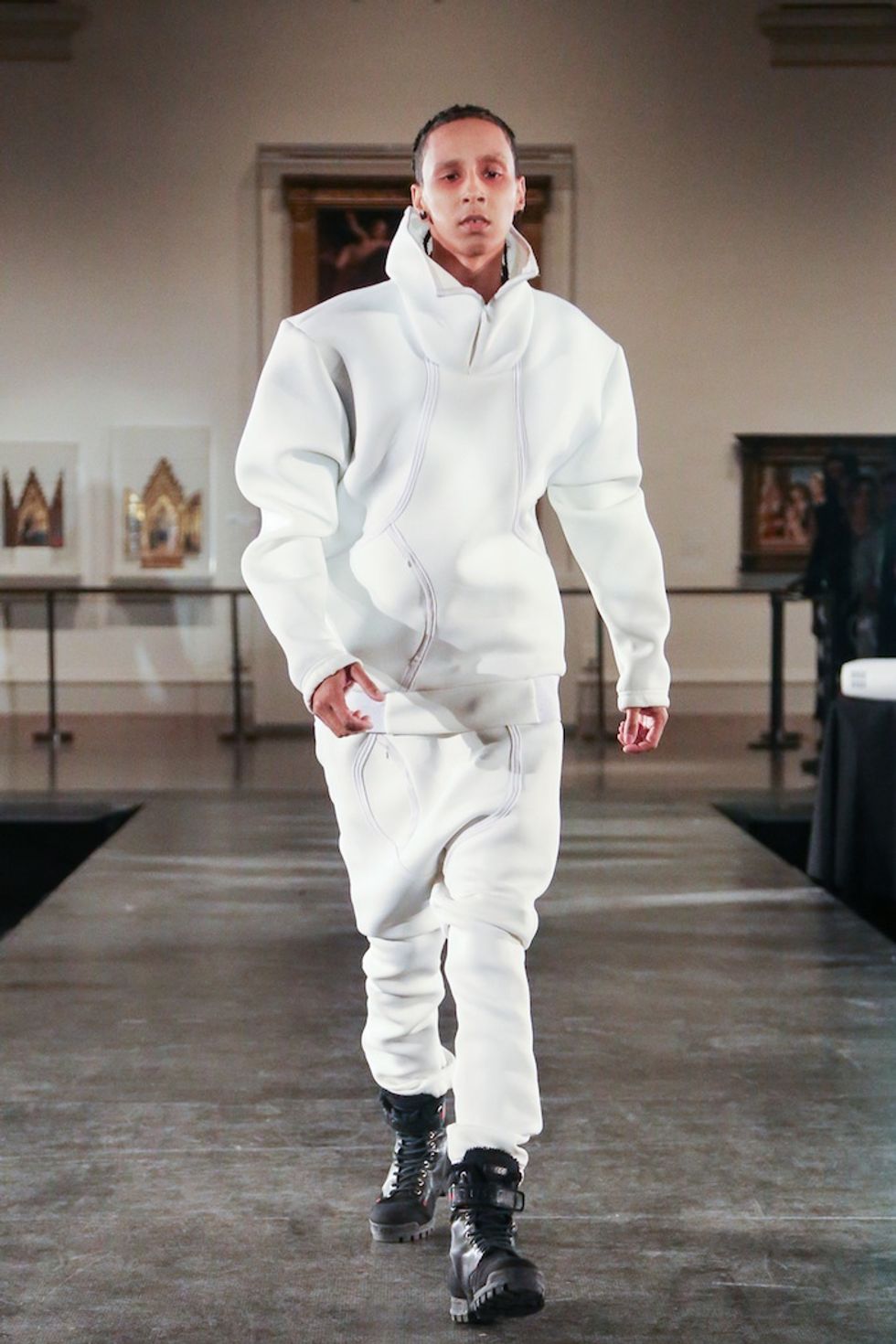 By Robbie Lee
PAPERMAG
photos by Katya Moorman and Karen L. Dunn
Mackswell Sherman is the brains behind gender-bending streetwear brand FONY, which prides itself in addressing fashion and function in equal parts. Sherman, who is also the co-founder of concept store MOVES alongside longtime design partner Sarah Jones, has created a collection that explores the darker side of New York City's industrial color palette, as well as the practical utilitarianism one needs to survive in said concrete jungle. Check out our Q&A with the rising designer below to find out more about his inspirations, emphasis on androgyny and the brand's underground roots.

Tell us a little about the brand. Where does the name FONY comes from?
It's real literal. FONY stands for Fashion Origins New York. We're creating a vocabulary and a foundation for future streetwear, while challenging [traditional] notions of fashion industry structure. It's a modular label in its appeal and function, so the name has multiple interpretations, like "Fo' NY" -- clothing built for the specific pace and climate of New York City. I like to design by perceiving deficits in utility and function...I wanted a new breed of streetwear that was minimal in its palette, but complex in modular elements that adapted to my city's daily needs. So this is a new era of tough, high performing clothing that more intuitively bridges high fashion, activewear and streetwear. These are the origins.
How do you go about picking the materials and colors for your clothing? What are some of the things you look for?
There's a severe, harsh realism in the clothing itself, and the culture we subscribe and respond to. FONY is hyperliteral and functional in our physical and social application -- so form follows function in both regards. The materials are whatever's going to make the best, high-performing, waterproof garment or the most versatile, modular, wearable invention. We select the toughest materials, like in this collection we used rubber-coated canvas, which is typically applied in heavy-duty bag construction, and use it on paneling for pants, snow skirts and weatherproof hoods to create a garment you could do physical labor in or maybe ride a bike through a rainstorm and stay dry in.

What were some of the things that influenced you? How did unisex clothing play into that?
Unisex clothing is the future. I've always believed in creating timeless garments that may exist in or outside of current trends. We do a lot of oversize silhouettes not really applying to gender. We're more interested in creating unisex garments that could be styled in a sexy, body-conscious way or simultaneously styled in an androgynous, feminine or masculine way. So one garment isn't necessarily confined to a "unisex look". It transforms for many types of people. I explain this because I don't think a clothing designer should limit themselves to notions of societal masculine or feminine aesthetics. That's tired and stagnant. My definition of a designer is someone who rejects everything preconceived about their medium and takes things to a completely new place. Why would I limit myself to creating clothing for one specific target audience or gender? For me that's not progress.
What have been some of the most important things you've learned by taking this non-traditional approach?
The queer, fashion-conscious crowd is one of our greatest supporting communities and sources of inspiration. Past and current collaborators include drag queens, out rappers, queer pop artists and DJs. We work with lots of artists whose process deals with queer theory, [however] we're also not designing specifically for [queer or LGBT] people. MOVES is a universal and inclusive movement for futurists of all philosophies. I draw from the freedom and radical appeal of queer style and sometimes I'm inspired by hypermasculine, cholo aesthetics. Motocross or dominatrix gear inspires me. We're out here, exploring all paths to the future. Taking a non-conformist approach has kept us on the outside of the fashion industry at times, but deeply rooted in the underground, thriving artist subcultures of NYC and Seattle. Honestly it's been a challenge, but a very rewarding and informative process. We support workers' rights and make our products in NYC at local factories, which isn't cheap. We use fair trade fabrics or [recycled] deadstock material as much as possible. All that combined with creating a product that is high statement, hasn't always made for an easy sell. At the end of the day, staying true to our ethics and our desires has kept us prolific and vital.
You May Also Like
Famous People