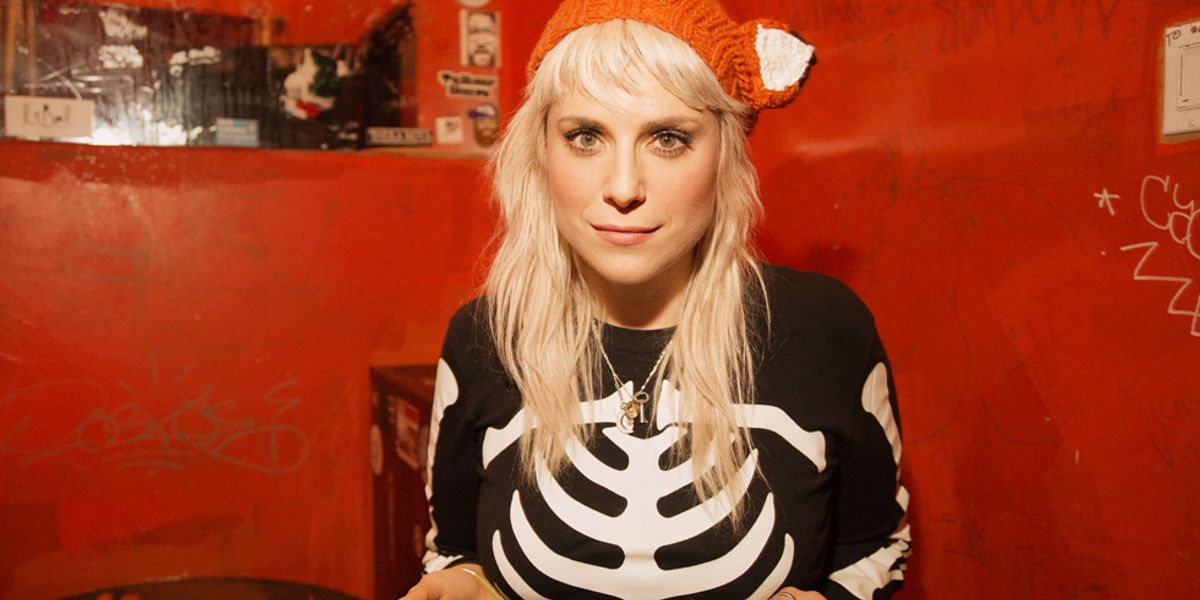 Meet Lane Moore, The Genius Behind The "Male Feminists Of Tinder" Tumblr

It's a dilemma we've all been privy to before. There you are, swiping left, left, left when up pops the dude wearing a "The Future Is Female" tee, holding a copy of The Second Sex and sporting the "I'm a feminist" line in their bio. A great sentiment, sure, but isn't that also something that should just be a given? After seeing a surge of self-proclaimed "male feminists" popping up on the dating app, Cosmopolitan.com sex and relationships editor and comedian Lane Moore (@hellolanemoore) created the hilarious Tumblr project, "The Male Feminists of Tinder," which crowdsources screenshots of some of the most self-congratulatory dudes out there using a positive social movement to get laid.

So in the spirit of Valentine's Day, we decided to chat with her about her project, what she thinks about the "male feminist" phenomenon and Tinder.

How'd you get the idea for this? How was the Tumblr born?

I'm on Tinder pretty much all the time for my monthly comedy show Tinder Live, which I've been doing for years now, so I've probably seen more Tinder profiles than anyone ever. In the last few months, I kept noticing guys calling themselves feminists in their bios or making these weird intense statements about how they were obsessed with women's issues, which is cool, but it just made it seem like they were basically holding up signs saying "I DON'T HATE WOMEN!!!" and it seemed kind of weird. I tweeted out a couple photos of these guys and people really loved them and started sending me profiles they'd seen too. I made the Tumblr that same night and it took off from there.

What's so bad about quote-unquote male feminists? Is it a matter of it being a self-congratulatory proclamation or the fact that often times it's just a predatory tactic to get laid?

Oh man, what a Sophie's choice. I mean, both are awful. If you're seriously going to say something like, "I think discrimination is wrong!" in your Tinder profile, like, do you want a cookie? It is wrong. I'm definitely suspicious of a guy who has to let you know how much he doesn't lack basic human emotions.

Why do you think men find this label so attractive on dating sites?

Sasheer Zamata was in a great sketch video that touched on how so many men are basically given a medal whenever they say they're feminists, so I definitely think guys think it's a way to score points, which is so bizarre, like, "I don't hate you because you're a woman! How great am I?" No.

I think some guys actually are feminists and just want to let women know that and don't know how to, but most of them seem to fall into the other category.

So much of what you do is centered on the darkness of Tinder, but have there been any positive experiences for you on the app?

I actually have a very positive view of Tinder. Two of my favorite people on earth met via Tinder and they're so happy as a couple. It's just like anything else, really. Some people are going to have great experiences and find what they're looking for and other people aren't. It's just luck.

Most atrocious message you've seen/received for this project?

This one might be my favorite, if for nothing else than the fact he fucked up the rhyme.

Do you think there's a female equivalent to this?

I feel like dudes are starting to catch on now though. Are there any other bio keywords you'd advise ladies on Tinder to watch out for?

Oof, how much time do you have? Watch out for guys who have "jokingly" angry bios -- so many of them are angry that women don't message first or that they're asked their height. Regardless of the reason they put that in there, do you really wanna message with some guy whose "about me" is "I'm already mad at you?" No.

Is there's a particular brand of Beta Bro/Good Guy™ who tends to use this label?

I wish. It seems to be all types of people, really.

What's been your main takeaway from this project?

It really just reinforces the theory that any guy who makes a point to tell you what a Good Guy he is is probably a dirtbag.