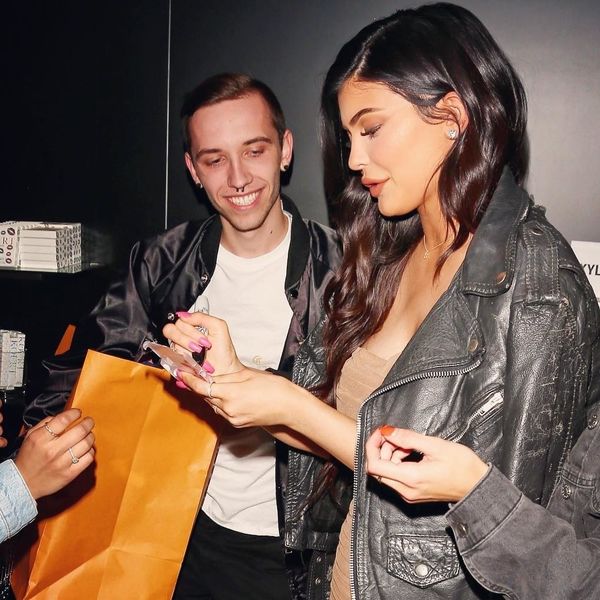 Social media has brought celebrities and their fans closer than ever before. Each side has become humanized via a constant stream of content, so much so that even those with immense fame are accessible to you and I.

Such is the case for Johnny Cyrus, a Milwaukee-based nursing home employee who is only several months older than his idol, Kylie Jenner. Cyrus has maintained an online relationship with the reality-television-staple-turned-makeup-mogul for years — a connection that evolved into frequently hanging out with Jenner at meet-and-greets and other fan-oriented events. It would be difficult for the star not to notice her fan, especially considering he tattooed her lipstick swatches on his arm.

At Jenner's San Francisco pop-up for her cosmetics line over the weekend, the two met again. This time she gifted Cyrus more than a selfie — handing over a $2000 dollar Louis Vuitton backpack to celebrate his recent birthday. PAPER reached out to the super fan to discover what makes the pair's relationship so special.

Johnny Cyrus on Instagram: “hiii, i’m finding more videos & pictures from the pop up 💋 so expect to see more ☺️”

Tell me a little about how you became a fan of Kylie.

I became a fan of Kylie from seeing her Keeks. She used to make them all the time and they were so fucking funny, then I just started following her on her other social media accounts.

When did she first acknowledge you?

She randomly followed me on Twitter one night and tweeted me a couple of times that same night. Everyone the next day at school was freaking out about it.

What was it like to receive a gift so generous?

I really didn't expect her to get me a Louis Vuitton bag! I didn't see it coming ether, it was the most amazing feeling getting that from her. When she brought the bag out I didn't think that it was for me, and I was so surprised — I didn't process what was going on.

Johnny Cyrus on Instagram: “Thank you @kyliejenner for the amazing birthday gift 😍❤️ it means so much to me!”

What's your day-to-day life like? How do your friends respond to your connection to Kylie?

When I'm not at work, I usually spend some of my time going to downtown Milwaukee or hanging with a bunch of friends. My friends support everything about my "Kylie World" and even some of them come with me to the events or pop-ups.

What's the wildest thing you've done for her?

I wouldn't say it's wild, but I got the lip kit logo tattooed. I knew I would get that tattooed as soon as Ky released the logo, it's actually a really cool art piece.

How do you deal with Kylie haters?

I usually ignore them, and don't feed into them. They're closed minded assholes who don't care about bringing others down. They tend to not be happy with themselves so they have to bring others down!

Johnny Cyrus on Instagram: “throwback to the grand opening of the Sugar Factory ❤️”

Who are your next favorite Kardashian?

Kim is my next favorite! I love her style, and when I met her in LA at the reunion special me and her had a couple of good conversations!

What would you tell other super fans who want to meet their idol?

Never give up and don't ever think nothing it possible! I never would've thought that me and Kylie would have this kind of relationship, it's something special!

How has Kylie impacted your life?

She's impacted my life by making me a better person. She's such a huge inspiration to me and it makes me so happy being who I am today, I could never repay her for who she made me become! Forever grateful.