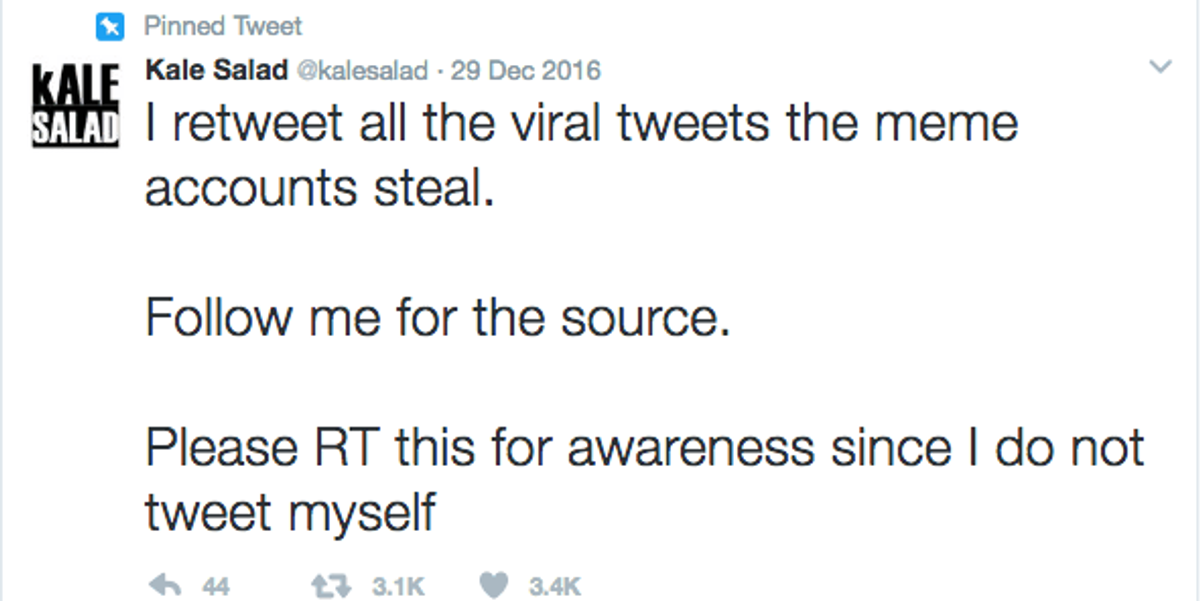 Meet Kale Salad, the Meme Account Giving Creative Ownership Back to the Internet

As the Internet continues to grow into a never-ending abyss of creative content, it's becoming increasingly difficult for users to protect their online material from being stolen by faceless meme humor accounts such as The Fat Jew and Common White Girl. Enter Samir Mezrahi, the man behind Twitter account Kale Salad, whose mission is to locate and retweet the original source of stolen tweets and jokes. Launched in November 2016 with a humble beginning of only a hundred followers, Kale Salad has since grown into wide-reaching social media platform with over 50,000 followers. Having worked social media at Buzzfeed and now currently serving as head of social at The Dodo, Mezrahi is no stranger to navigating his way through the wide-reaching web. We chatted with Samir about the origin of Kale Salad, the investigative process for memes, and the future of internet culture.

I have to ask, why the name Kale Salad?

Samir Mezrahi: I've been asked this before and I wish I had a better reason besides Kale salad was kind of popular a few years back and I managed to grab the account. I guess it's kind of like an old meme in that it was a hot thing to talk about once, but now not as cool.

What sparked the idea?

SM: I've been a fan of great tweets for a long time and always wanted to find a way to reward and amplify them. I thought people would be interested.

Describe the process of finding the source, I imagine there's a lot of investigating involved.

SM: There are a few ways, Twitter search is pretty helpful. For videos I can grab the video URL and it sometimes links back to the original source. I follow a decent amount of people and I've often already seen the tweets that are being taken so I keep them in a kind of queue. Plus as the account has grown I've developed an amazing follower base that'll send me tweets that've been taken. People reach out directly looking for the source of stolen tweets--it's amazing to see people really wanting to retweet the original source. I feel like a personal meme consultant.

Have any of the sources contacted you?

SM: I've received some thanks. Sometimes people send me their own tweets that have been taken and they always appreciate the retweet.

Now they are taking from me lol pic.twitter.com/Ho2tdfxWGU
— Kale Salad (@kalesalad) January 2, 2017

What's surprised you the most after creating the account?

SM: How happy people were to see my account doing what it does! The initial and subsequent reaction this past month alone has been amazing. It's also been interesting to see people who've had their tweets stolen in the past, months or years back, looking for some sort of "vindication" since it was taken.

The internet can be tricky, it allows people to share original, creative content but that content is also at risk of being stolen. What are your thoughts on that?

SM: I think with the mass amount of material on the internet it's just become part of the culture that ideas will be taken and even adapted. I still don't know if that overall is a good thing, but it's just the way things have become.

This must mean that what we are doing is working pic.twitter.com/v9m79EDGWj
— Kale Salad (@kalesalad) January 2, 2017

How do you see meme/internet culture evolving over the next few years?

SM: I can't see the life of a meme getting much shorter than it is. Two years ago they were fortunate enough to get a few days in the spotlight, but now there is so much out there that the life of memes are much shorter. Things pop up and go hyper viral and die within a day. However, I do think memes have done a lot to bring people together--in good times and bad, and I can only see it bringing people even closer.