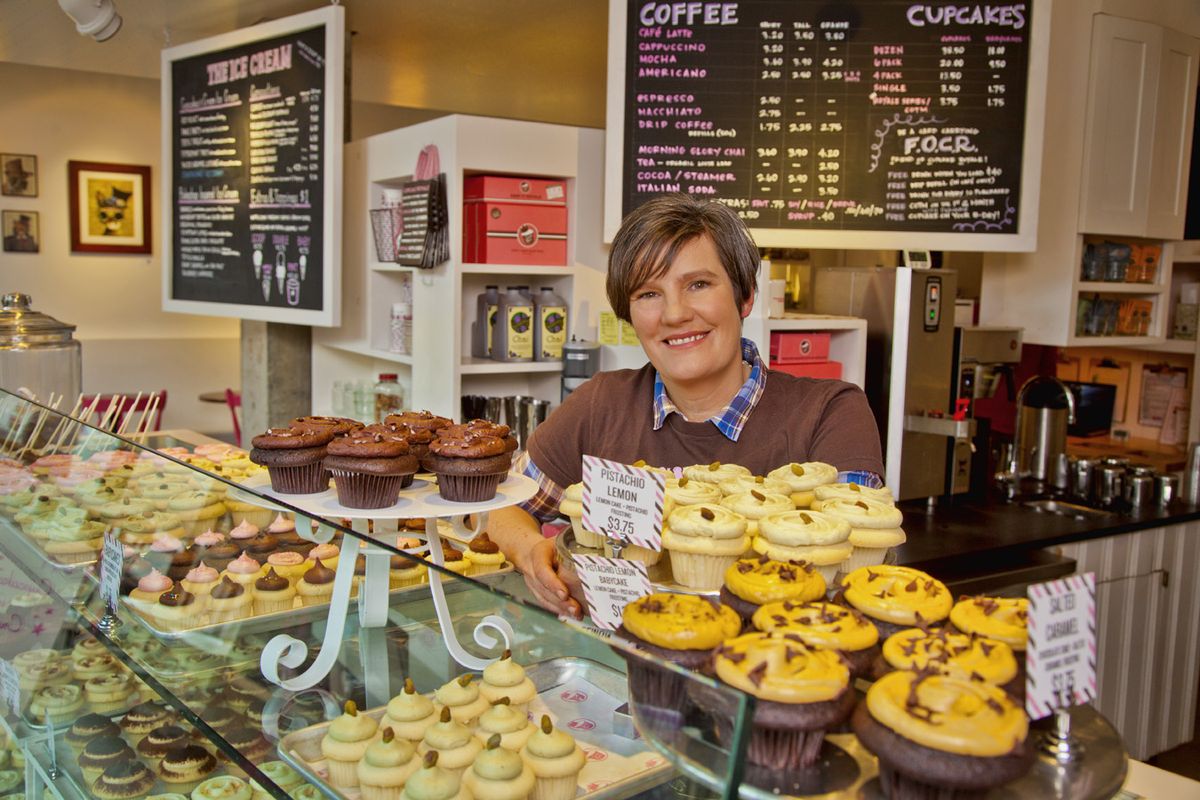 We can thank Magnolia Bakery for the cupcake craze--and certainly, these days, it feels like there's a boutique sweet distributor on every corner. But back in 2003, when Jody Hall opened Cupcake Royale, it wasn't just Seattle's first cupcake-only bakery, but one of the few in the country outside New York.

Since the beginning, Cupcake Royale has championed made-from scratch desserts that incorporate ingredients from local suppliers, at their six locations across the city. Hall has also branched out her baking skills, opening Rodeo Donuts and her latest, The Goodship, which--following the legalization of marijuana in Washington--provides edibles. Hall talked to us about what she learned from Starbucks, the nostalgia of baking, and what cupcake they gave President Obama.

First, can you give us a brief history of Cupcake Royale?

I have spent my career being a pioneer at businesses that truly chart paths, lead culture and change the world. In 1989, I began my career at a little coffee company called Starbucks. At the time, Starbucks had 30 stores in a few markets. I was invited to be one of the first people in the marketing department to lead marketing in opening new stores and markets, then in national promotions and finally in Starbucks Music. In my 11 year tenure here, the company grew to 3,000 stores. I learned so much from Starbucks - about building brand and culture that people want to be a part of as well as fueling product sales. I also learned about what Howard Schultz would call the most important asset in business - and that's your people. When I opened Cupcake Royale in 2003, my motivation came from much of what I learned at Starbucks. I wanted to create a neighborhood bakery and cafe that supported community and gave back. I wanted to teach folks how to make cake from scratch, as most had not even tried a scratch baked cake back then. I wanted to pour coffee one cup at a time - with freshly steamed and perfectly foamed milk integrated perfectly into well poured espresso. As the first cupcake bakery outside of Manhattan - I knew I was taking a risk in this idea. But turns out, I was on to a good idea.

What inspired you to start baking, and then to focus on cupcakes?

I've always loved baking and making creations from a few simple, fresh ingredients. I love the heart that's put into baking. I'm not a professional baker - I just loved to do this in my home. Coming from Starbucks, I knew that I needed something to go with my deliciously crafted coffee to pull folks from other coffee shops to mine. I decided to go with cupcakes, because really, cupcakes are just a form of cake and they have such a nostalgic sense to them - I think many of us recall making cupcakes with our mom or grandmother and sharing them on our birthdays when we were children. Plus I think cupcakes make people happy. They bring joy just looking at them.

Cupcake Royale seems to be very into local and seasonal products. Was that important to you from day one? How has that been a positive for your business?

Yes, a big part of our philosophy from day one was to support local farmers, purveyors, etc. to get fresh, delicious ingredients. Not only does it provide the best tasting cupcake, it also helps to build a local community and economy - which we strongly believe in.

What is your favorite cupcake? What is the quintessential Cupcake Royale order, the most popular with customers?

My favorite cupcake is probably the Dance Party with Holly Hobbie--our vanilla butter-cake topped with pink vanilla buttercream and rainbow sprinkles. It's so delicious - and it really does make me smile. Customers love the Dance Party - but also love our Salted Caramel (a cupcake we gave to President Obama when I met him 6 years ago!) as well as our Tiramisu, Red Velvet, Toasted Coconut with Lime - I could go on all day!

What's unique about running a business in the Seattle community? What about Seattle has helped Cupcake Royale thrive and expand so successfully?

Seattle has a rich and amazing culture of supporting local restaurants, coffee shops and bakeries. I know most of our community in this area. We collaborate and work together on ideas to make our community stronger. We root each other on and help each other out. I think Seattle is also a very progressive city--which allows us at Cupcake Royale to stand up and support progressive issues with our employees, customers and community. Right now, Cupcake Royale is in it's fifth year of selling The Gay cupcake for Pride month. Each year, we've raised on average of $10,000 for LGBTQ rights--and are selling the "Make America Gay Again" hats and T-shirts and giving proceeds to NCLR, a national LGBTQ rights organization to further equality for all. And in light of Orlando, we feel that this is especially important. We're not going to hide in fear - we're going to keep on fighting for this right.