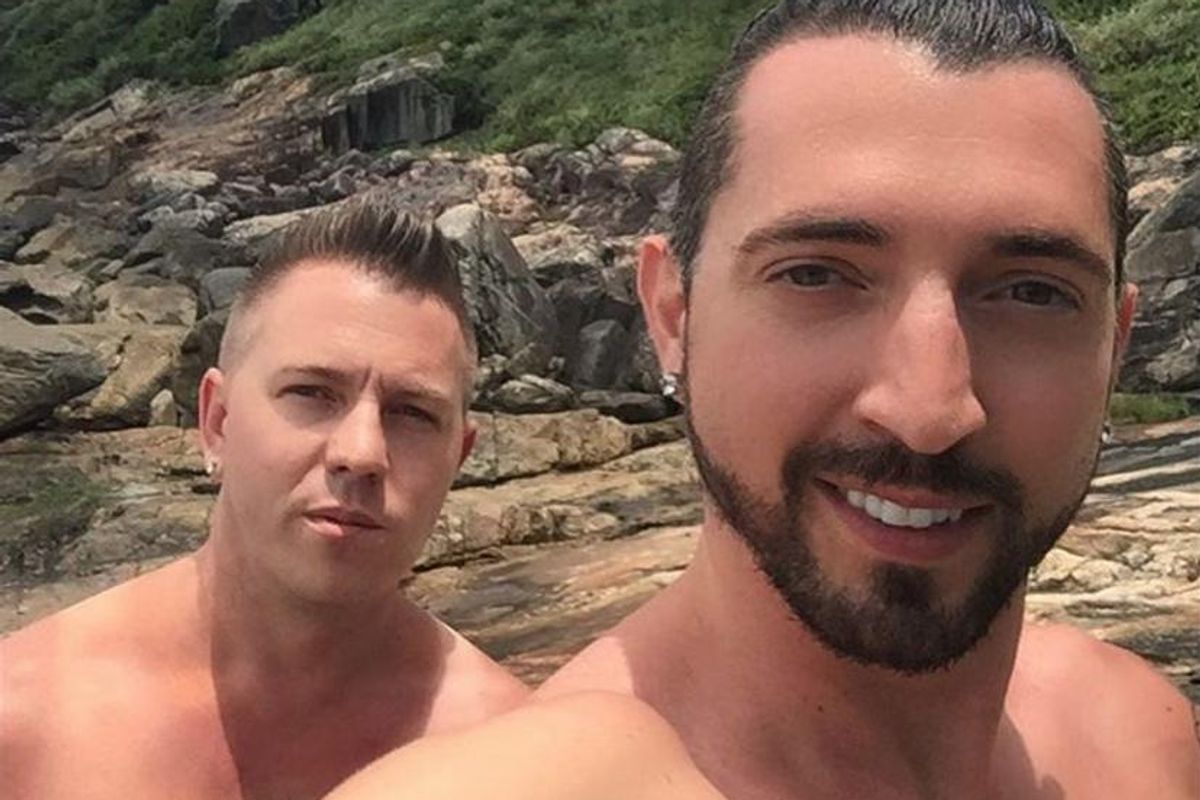 Relationshipscan be a tough one for any couple -- in between all the miscommunication and jealousy that occurs -- but what if both you and your husband are in the business of, err, having sex with other men?

So tell me a little bit about how you guys first met. Was there a meet-cute moment? Was it love at first sight?

Jimmy Durano: Oh gosh, yes and no, I think. We met few times in different cities, since we work in the same industry, [so] we crossed paths quite few times -- but times when we were on red carpet events and I was seeing someone, or when we where in WeHo, LA for some event and he was dating someone -- so it took few encounters till we were single at the same time. [When it happened] it was my birthday and I was shooting, with Christian directing on set, and while I was doing my thing, he arranged to get me a birthday cake delivered to the set. It was the cutest [thing] he could have done that day. After that we were on Twitter saying that the chocolate cake wasn't his favorite that day, because I was on set and brought my own "cakes". Get it? Then we went out for dinner and things got serious after that.

When did you know he was "the one"?

JD: I think we realized a few weeks later when I was back in San Francisco, and what should have been just a weekend trip was extended do a two week stay. When we started dating I was living in Seattle and Christian was living in SF.

Is there a cute proposal story in the mix?

JD: No, unfortunately there was not. Yet, who knows, [maybe in] the future? We can always do something later on. We were just both in such a good place and having same sex marriage legalized [spurred] us to tie the knot.

Christian Owen: Our wedding was very small in Marin California. We plan on having a larger ceremony in the future with our family and friends and hopefully it will be on a beach.

What are you guys planning on doing for Valentine's Day?

JD: We are really good food lovers, so I am going to take him to one of the many nice restaurants here on the Strip.

Do you guys ever work on projects together? What's that dynamic like? Is it weird to watch your husband get it on with another guy? Or know that he spends all day watching other guys? Or is it a non-issue?

Do you attempt to separate work from home life at all? Or do you find that this is easier said than done? Why?

JD: Yes. All the time. It's important to separate work from home. Nobody in the office or on set wants to hear us arguing about why he or I didn't do something at the house, or forgot to do something on the way home -- it's not professional. And I also don't wanna talk about work when I get home after a long day on set, I just wanna unwind, grab my remote control, have a sit on my cozy sofa, put my legs up, watch whatever is on TV, and not talk or discuss work. But we do talk business, we are always brainstorming and thinking of what to do next. Personally though, I think there's a difference between talking about something that happened and something we can make happen.

What's next for you guys?

CO: Our pride and joy are our dogs Ollie and Sophie. Hopefully one day we will have children...2016 is going to be an amazing year I have some really cool projects I am working on that will be announced this year.