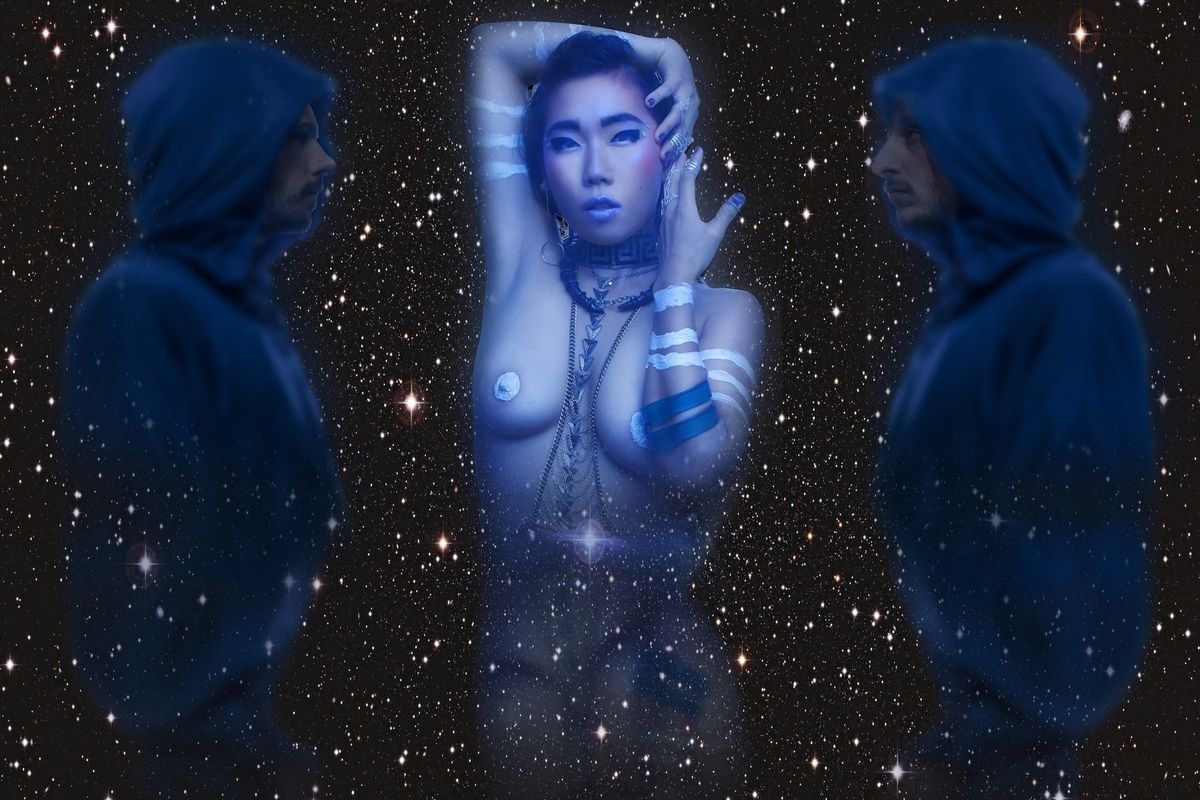 DUST may have begun a few years ago as an Italo disco experiment, but over the years they've slowly evolved into the sort of gritty, throwback techno goldmine that epitomizes DIY nightlife in NYC at it's finest.


Though that comes as no surprise, seeing as how the group -- composed of multimedia artist Greem Jellyfish, audio engineer Mike Sherburn and former PAPER contributor/Bossa Nova Civic Club owner John Barclay 00 has been (rightfully) referred to multiple times as Bushwick's very own electronic supergroup. But that doesn't mean they're merely resting on their luminol-tinted laurels with Agony Planet. After all, the trio have already come out with a manic accumulation of sinister sonic gristle that even my most rave-fearing of friends could definitely get down to -- in the mist of an overfed fog machine and a mate buzz, of course.

As such, we had to speak to the dream team behind this genre-melding madness in anticipation of their new single "Alien Prey" and ahead of their record release party this Friday about everything from Ridley Scott to punk rock, and how exactly it all fits into their plans for mutant overlord domination.

You know, the first mention that I found of you guys was from 2012 -- and back then you guys were doing a very Italo disco, Euro thing. What exactly spurred the huge sonic change?

John Barclay: Mike [Sherburn] and I sort of attempted a post-Italo track and somebody wanted to put it out...we only did like 2 Italo tracks though, and then immediately we were like, "Why don't we just keep playing around with this?". [At the time] we only knew Greem pretty vaguely, but were like "Oh, she may be into trying to do vocals on this". Especially since we were more interested in high-energy dance stuff -- like evolving into a heavier, faster and more rave-oriented sound.

Greem Jellyfish: Yeah, when I first joined, I was quite younger. I was really angry, but I didn't really know how to make or play music. I still don't really know how, I just love music and I like dancing and I really wanted to make music and play shows, because I was working at [Barclay's former venture] 285 Kent. I really loved the energy, the way the room felt too; like people got together and [got] their anger out in the mosh pit. I really like the mosh pit, like how people are punching, but are still respecting each other. I wanted to play music like that. I then [channeled that] anger and that energy into DUST after John invited me to collaborate. I don't think I'm a good singer, but I really like screaming. It makes me feel good.

The press release kind of touches on this, but you guys are kind of like the dream team of DIY New York. Tell me about your origin story. How did you guys get together?

JB: Yeah, Mike and I grew up together. We were sort of estranged, we weren't really like great buddies growing up or anything, but we both sort of had different musical projects. I moved here maybe 2 years before [Mike] did, and we were just trying out different musical ventures. But I guess this is the first one that we ever got any sort of recognition from. I believe how we know Greem is from 285 Kent, or from just being around the DIY warehouse, proto-Williamsburg rave scene. [Before, Mike and I] were in a synth-pop disco outfit called Sensual Harassment, which still sort of operates.

Mike Sherburn: There was another guy [in Sensual Harassment]...and we still write songs, but as far as that project, it's no longer the same. We've all kind of gone our own way, but John and I have been more interested in the more techno environment. Me and the other guy were more interested in the pop format of song writing...bedroom music.

GJ: Also, our music has been changing because we've been on tour to Europe twice -- and we really loved going to Berghain, which is a crazy venue.

Dude, I've had like 4 separate conversations about [legendary Berlin techno club] Berghain today, which is testament to how influential the space is. I took a nap on one of those disgusting couches in the basement, but I was determined to make the 5 hour wait in line worth it.

JB: You really waited for 5 hours?

Yeah, it was prime time -- Friday night. I was like I'm going to fucking get into Berghain and maybe die there.

GJ: I think your story sums it up, like strangers being in one giant room together. It's such a beautiful experience, and so strange, and I think its something that I can never experience in New York or in my life. I don't think I would have another experience like that anywhere or at any other time or space. So I think we were very inspired by the sound of [Berghain], and the experience and the story of it.

JB: Yeah, I think the skeleton of this album that's coming out was mostly composed in Europe, so we were obviously more into the dark dungeon techno thing, which is much more prominent over there. We were in Europe for a month last year, and when we weren't playing, we didn't have anything to do. So Mike started on a couple tracks and that set the foundation for the rest.

The press release says that the album switches from like alien to dungeon to the occult, but if you had to attempt to streamline the album's narrative, how would you do it?

JB: Actually, I think the press release is pretty accurate. It was intentionally vague, the concept is supposed to be a sci-fi narrative where humans are at war with some sinister alien race that has captured either all or a certain group of humans -- we've never specified.

GJ: We want the audience to create the story by listening to our music.

MS: Yeah, it's just a nudge in this direction. It's essentially like a planet that's harboring this.

So it's a "choose your own adventure" kind of deal? Is audience participation a concept you guys are trying to work with?

MS: I don't want to say there's anything too thought out to the point, but the idea generally came from sci-fi. Mostly like horror sci-fi and the experience of being trapped somewhere and there's something [out to] get you, [like in Ridley Scott's Alien]. But in this case, it's a planet as opposed to like a ship.

Okay, well let's address the dreaded "influences" question -- though in this case I am really curious, seeing as how you went from Italo-revival to this dark basement techno in a matter of years.

Poking fun at the concept of techno music is kind of funny seeing as how you're all involved with Bossa Nova Civic Club, or what is arguably NYC's techno mainstay.

MS: I think music in general is very funny, when you take yourself out of it and you're standing in front of people and you're playing this music and there's moshing or even yourself reacting, people are just staring at you, I think it's kind of funny when you take yourself out of it, like look at it that way like here I am doing this. But then, you also take yourself very seriously which is why you're doing it. I feel like all our music has that element of 'yeah we know what it may appear to be, but its not'

But I mean, it's not like this is some big joke. Like, Agony Planet is legitimately a really good release that you guys obviously labored over.

JB: Yeah, it's not like "Jokes on you guys!", but at a certain point you got to be like, "Hey it's just music!". Like this is something we just created, and I think a lot of people don't actually realize that we're just creating music. They take it so seriously...we aren't trying to like change the world.

MS: Yeah, we aren't trying to release some alien message or something. It's a piece of art.

JB: Or maybe we are, but it's encoded with jokes.

So what are your shows like? Is it weird to watch people take it all super seriously?

JB: I don't want to come off arrogant because I'm there to have fun too, but there's a moment when I'm like, "Oh shit, everyone is staring at me, and this is like my shit." There's a moment of vulnerability, but then it's like, I can't believe everyone is there watching us do this. But it's great, I'm not complaining, I'm not saying it's a big joke like "Haha, you come to shows," but there is a moment when you have to realize that we are all just people standing in a room staring at someone playing a keyboard.

GJ: I say it's the best when they're enjoying the music and themselves, outside of reality -- dancing with us. You kind of like freak out about who you are, and just dance your body off. I think that's the primal joy of our performance.

JB: In terms of genre, our live performances are a lot more punk rock or like DIY than the vast majority of anyone doing techno or even dance music. We are actually playing instruments, but then Greem is also singing, or screaming, and very active.