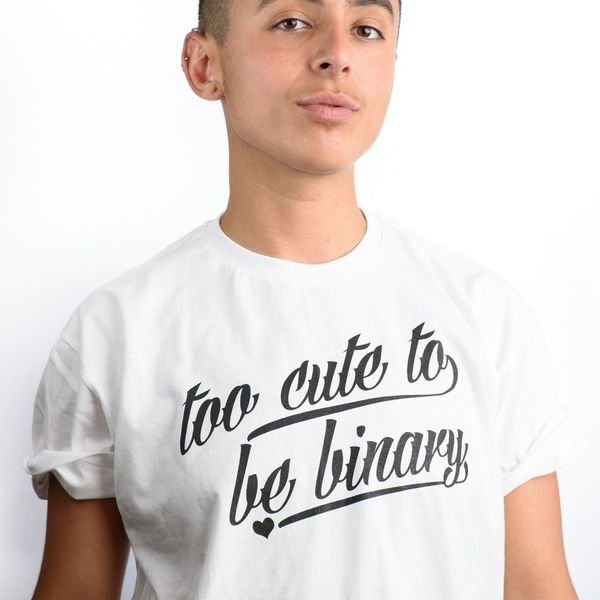 Pidgeon Pagonis was born with cancer in their ovaries—or, at least, that's how their mother explained the mysterious scar across their abdomen. "I had no reason to believe they may have been lying," they say. "Knowing I couldn't have kids when I grew up bummed me out. While playing with barbies and dolls, I often mourned the fact that I wouldn't ever be able to have a 'real family.' I often felt ashamed that I wasn't like the other women in my life."

When they were in fifth grade, they underwent what they were told was a bladder surgery. It wasn't until they were 18 that they learned the surgery had been one of a few procedures that had followed their being born as intersex.

It was during a class in college freshman year that this realization came to light for Pagonis, spurred by a professor's presentation. "I recognized myself on one of the professor's slides about intersex women with a variation called Androgen Insensitivity Syndrome (AIS). Everything on the slide seemed to match up with my life. Everything, that is, except for the bullet about XY chromosomes. I was declared female at birth (DFAB), and since I grew up in a society where the sex and gender binary was, and still is, immutable, I literally couldn't wrap my head around the fact that I might have XY chromosomes. Yet, my gut told me that AIS must be the real reason why I couldn't get a period or have kids."

Pagonis called their mother to confirm and to reopen hospital documents that stated they had been born with AIS. Now, 30, Pagonis looks back on that time in their life as a way to help others, especially in their community of Chicago. A few years after discovering they were intersex, Pagonis was invited to participate in an intersex youth advocacy groupcalled Inter/Act, which inspired them to advocate for and get to know other intersex individuals across the world.

"After coming to terms that there is no going back—that there is no magic pill or surgery that could bring my original body back—I set my sights on making sure other intersex kids won't have to go through what I went through," Pagonis says. "My involvement with Inter/Act—which eventually evolved into a job with the organization as the youth leadership coordinator— led to opportunities that afforded me the ability to advocate for my community on a national and international level."

That advocacy received national attention at the end of 2015 when the White House honored Pagonis as a Champion of Change for their work with Inter/Act and the intersex community. Pagonis says they have seen a community that has grown to welcome those across the spectrum, including intersex peers. They say they try to stay updated on what is happening across the board in the city, from LGBTQA+ community groups to other realms of activism. "At the same time, I feel like I've always had one foot in, and one foot out. I tend to oscillate between activist and support group spaces in Chicago focused on all types of things ranging from anti-police brutality to zine making by fierce radical brown folks."

"It's definitely my highlight of each summer," they say. "I, and all of us here, are so indebted to all of the work that the Chicago Dyke March Collective puts in to make the march and rally in the park afterwards so fun and healing each year."

And this year in particular Pagonis remembers as one to celebrate. "After Dyke March this year, a group of us skinny dipped in a small tucked away beach under the moonlight, and it's a memory I'll always keep with me."