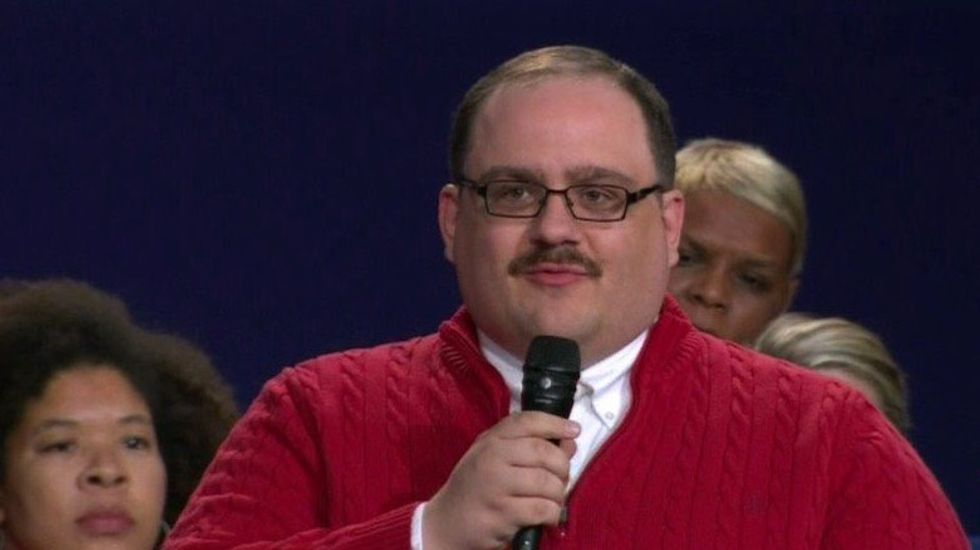 Last night's ugly second presidential debate may have made the majority of Americans feel like they were trapped in the Star Wars trash compactor scene, BUT despite Donald Trump's snorting and stalking and ham demonry, the internet found something beautiful and pure to cling to in the form of town hall question-asker Kenneth Bone. Every cloud has a silver lining, y'all! He had a question about the energy industry, an aura of purity, a red sweater, a white tie, a disposable camera and the key to all of out hearts. Meet Ken Bone, the hero we deserve and the only topical Halloween costume that matters now...


Got in a handshake with Bill Clinton...

And then, in the flash of a disposable camera, he was gone.

And the internet moved quickly...

I want Ken Bone to wrap that beautiful red cableknit sweater of his around our divided nation. Only his warmth can save us now.
— Marc Carig (@Marc Carig)1476067499.0


This morning, the Bone Collector appeared on CNN to discuss his newfound fame, and apparently he went for his legendary red sweater because he split his suit the night before. KEN BONE!!!!