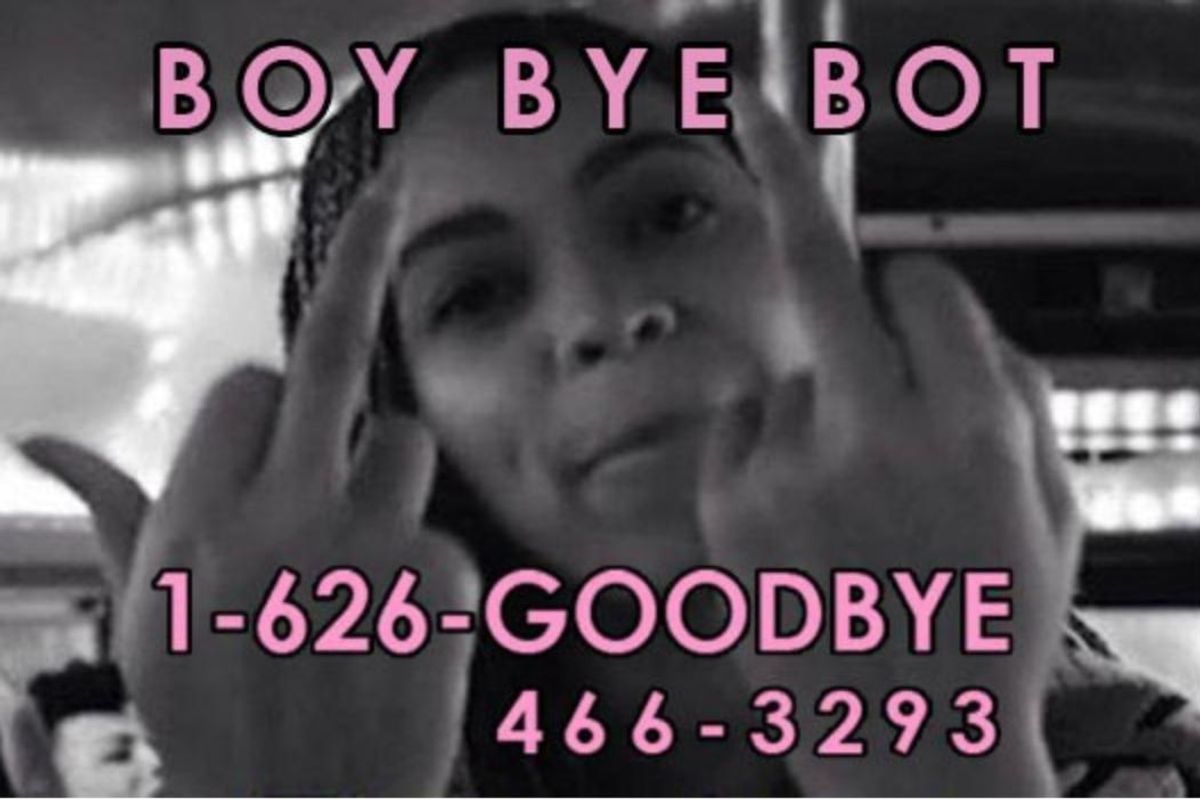 Meet Boy Bye Bot: the Fake Number That Will Text Back Fuckboys For You

Ever drunkenly given out your number and been rewarded with multiple unsolicited nudes? Had a dude take "no" as an obstacle rather than an answer? Had some guy on Tinder come through with the kind of ejaculation references that make you question whether they have ever felt human love?

Of course you have. You're a woman.

It's no secret fuckboys run amok on Tinder/in bars/pretty much anywhere where there's oxygen. We all know the most effective method of shutting them down is not to reply, when really you'd love to teach them a lesson without actually having to deal logistically. Now you can, or the Boy Bye Bot can, for you.

A screenshot of a real conversation between creepy dude X and Boy Bye Bot.via boybyebot.com

An updated 2017 version of Jonah and Chelsea Peretti's 'Rejection Hotline' (a number you could give men you weren't interested in, which came equipped with a recorded message to inform them of that fact), the Boy Bye Bot is programmed with a series of replies when triggered by certain messages. Simply give out the number (1-626-GOODBYE) to satisfy an undesirable suitor and the Boy Bye Bot will do the rest of the work for you. Common responses include links to Jezebel articles, recommendations to donate to Planned Parenthood or "where's my breakfast boi??"

You can even inform that serial "u up?" 2am texter you have a new number...and point him in the direction of Boy Bye.

Comedian Hassan S. Ali created the Boy Bye Bot after hearing horror stories from his single female friends constantly receiving derogatory pick up lines and countless requests for nudes. He says he wanted to make sure all the replies were "crazy and weird and humorous."

"While I've programmed replies to as many prompts as I could think of, there are cases where guys text in stuff that I haven't planned for. In those cases, it'll trigger a random response like 'oh really?' or just 'hmm. interesting. tell me more.'...the fun part is seeing the ridiculous interactions people have with the bot."

Even if you ride a wave of good luck and great guys and have no reason to say 'boy bye', all conversations between creepy dudes and the bot will be posted to BoyByeBot.com for your reading pleasure.