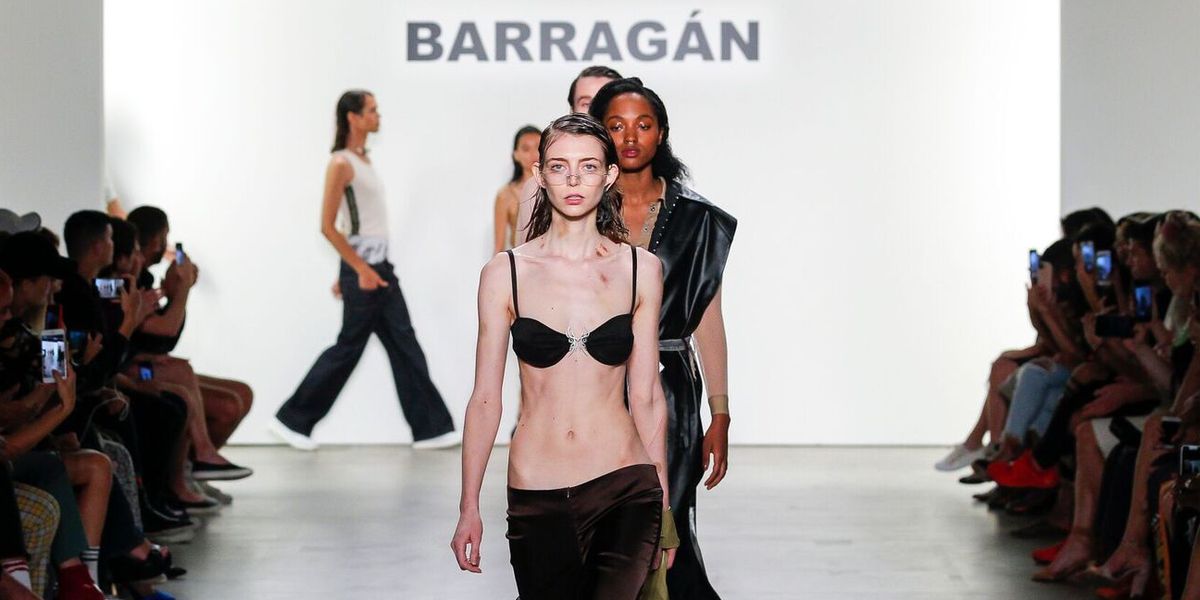 Before making a name for himself on the runway, Victor Barragán proved himself to the internet by way of Bigcartel. At 17 years old, the young designer based in Mexico City began making t-shirts and selling them online. Short there after, his quirky tees picked up traction and once silly dreams of pursuing fashion suddenly became potentially attainable.

Yesterday, at 25 years old, the designer made his runway debut at NYFW, revealing the Spring Summer '18 collection of his eponymous label, BARRAGÁN. The diversely cast show of slick-haired models was laced with reminiscent notes of 90s runway; inviting McQueen's once iconic, super low-rise "Bumster" pants back onto the catwalk. With that said, the designer also featured novel silhouettes in collaboration with familiar, yet repurposed motifs, like the tribal tattoo. Though claiming to have done so "as a joke," Barragán cleverly reinvented the design in presenting it through contexts unfamiliar to its common reputation.

Barragán seemingly expresses a tendency to create from what already exists—presenting the familiar in unfamiliar circumstances. Attributed to his dual perspective, the fresh designer claims to not only reference his Mexican "roots and heritage," but also put them in conversation with the ethos of New York to "create something new." Thus, a lesson we could all use on reducing, reusing and recycling.

We sat down with the designer post-show to chat about the heterogeneous cast of models, his transition as a transplant, and Mexico's rising presence in the American fashion landscape.

First of all, congratulations on the show--amazing. I want to bring up, first of all, the casting, which really stood out to me. It was super diverse in terms of race, size, gender and even age. How was that deliberated?

Yeah, honestly most of them were friends. I always go with my friends because they know the brand, they know what it's about and they're not hesitant or scared to walk for me.

*Laughs* Yes, some others we also casted through Instagram or by knowing each other online.

Can you talk a bit about where you drew inspiration from for this collection? I noticed a recurring figure in the clothes and the jewelry that I dubbed the "cholo motif." Why was that so present?

I think it can lend itself to a lot of different things, because you can perceive it in that respect, but you can see it a lot in the streets of New York, here too. So I think it's pretty cool how a sort of graphic design can mark a generation or demographic. I think it's funny to see so many people with that particular sort of tribal tattoo, so our decision to incorporate it into the collection was more so a joke. At the same time, the design has such an association with tribal tattoos, but in the collection I think it looked more polished. Also, we collaborated with Maryam Nassir Zadeh and Rombaut for the shoes and Ready to Die for the eyewear. I wanted to source friends and talented people to help create the new collection.

Yeah, would you say that in using that motif, the tribal tattoo, you were repurposing it? Giving it new meaning, since it has such a perceived association?

Yeah, I think that before it was cool, but now it's kind of "ew," but it's really not so bad! I personally think it's good, and am being playful with it.

I'm also curious about your start in fashion, because you got popular off of a shop on Bigcartel, selling t-shirts, but now you're showing at New York Fashion Week. How has your perception of fashion and design changed from doing that at home and now presenting in New York?

I know! I didn't plan it! I was just playing with some tees. I mean, I was really young when I started, around 17. Now I'm 25. I really loved fashion and was just playing, but then I started getting more excited and willing to try new things. Then, one collection happened, and then the next, and the next and it just kept getting better.

And this is your first runway, so what did you have to consider differently here as opposed to a presentation?

I feel more pressure on the runway, because everything has to look really clean. I don't know, there's just more pressure. But in our presentations before, we played a lot--we had performers coming on. I think the models felt really free in the performance to act a little. I really enjoyed presentations because it was a performance and had a different meaning, but runway is so straightforward. They're just different.

I also want to touch upon your upbringing in Mexico City and your heritage, because you only moved here 2 years ago, right?

Yeah, it was the first time I had been to New York, too. I didn't know anything about New York and I didn't speak English that well either. Getting better and better!

But how has your upbringing in Mexico informed your design now?

I think I have a lot of reference from it. I play a lot with stuff that I see in Mexico and also here. I like to compare them, use my roots and heritage and create something new.

I think it's worth mentioning too that Mexico is gaining some cultural prominence, especially within creative industries.

Yeah, but also it seems that more Mexican designers such as yourself and Sanchez-Kane are jumping into the American fashion landscape. What does it mean for you to come here to pursue fashion as opposed to doing it out in Mexico?

I don't know... I mean I didn't arrive here and decide 'Okay, I'm going to do fashion.' I was playing around a lot when I got here, I was so excited to see so many young people doing presentations and exhibiting, so I just decided that I wanted to also.