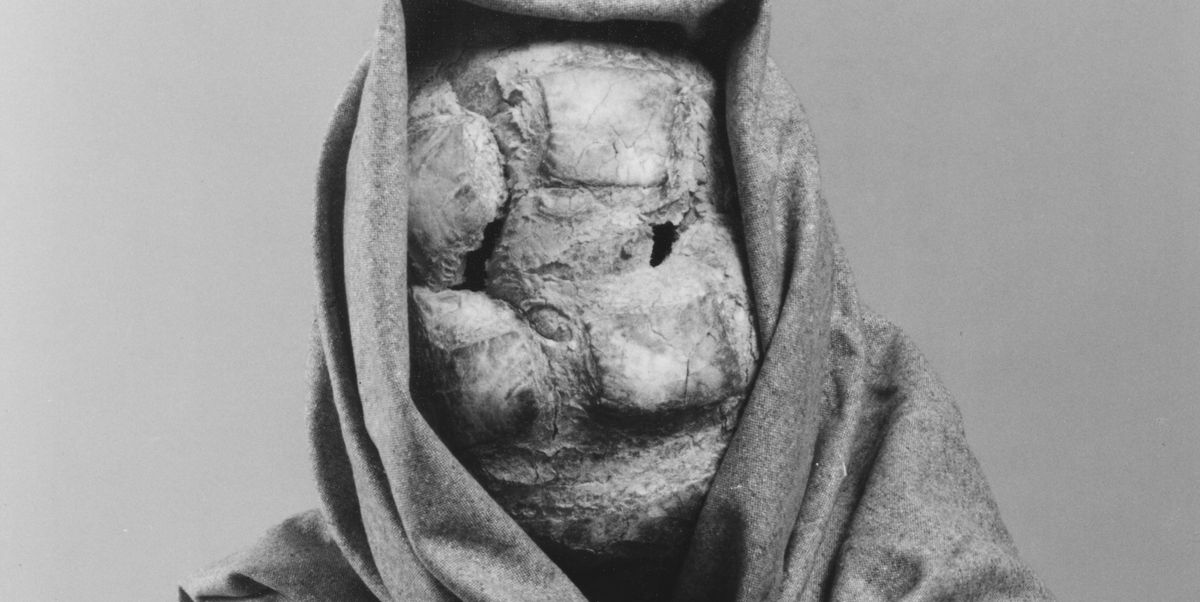 While you all may be obsessed with the brief Internet sensation that was "BreadFaceBlog", just know that long before virality was a "thing", there was an eternal character known as Breadwoman. Emerging from the depths of LA's underground art gallery culture in the 80s, Breadwoman is a timeless, avant-garde character combining ephemeral electronica with anthropological inclinations -- and it's about time she's risen again, hollowed-out bread on her head and all.

Exploring ideas surrounding self-created mythologies and invented languages, it's one of the more unique projects to come from Brooklyn-based label RVNG Intl., who are releasing a long overdue collection of archival tracks from yeasteryear called Breadwoman and Other Tales tomorrow. Mainly the work of LA-based artist Anna Homler, who linked up with composer Steve Moshier to create sounds meant to transcend time, genre and conventional performance modes, we knew we had to speak to Homler herself ahead of the release. Below, we chat about everything from her cultured character to gluten intolerance to the universality of carbs. Feast upon a dearth of bread-related puns below, along with some vibey music that'll be perfect for that next wine and cheese night.

So how was Breadwoman born?

I have to revisit the archive of my brain. It feels like she was always kind of there. I was studying performance art and in our class, we were taught to follow those images and those things we saw from the corner of our eye -- those images, dreams, our feelings, no matter how illogical they felt. So I had the desire to wear bread, and I can't explain it logically, but it was just a feeling---maybe I wanted to return to the womb? I don't know -- I just had this need to wear bread. I also was doing a lot of research [and what came together] was an image -- a breadwoman -- a woman so ancient that she lives outside of time. My background is in anthropology, so I studied the aboriginal concept of Alcheringa, which is the dreaming, but that's where the ancestors live, the stories live, the songs live, and I thought, "You know, Breadwoman is some archetype, and I think she lives in the dreaming. I think she lives in that realm." Which is sort of connected to our realm, but is separate. And this research just fed into a lot of things [from cultures all over the world]. I was looking for a Breadwoman, but there wasn't actually a character called "Breadwoman." There was Cornwoman. There was Isis, who was called "The Lady of the Loaves," like loaves of bread -- and in ancient times, the bakeries were near the temples. And also, I found bread was the first form of currency.

This might not be true, but---this is like a fanciful fact...So, anyway, all of these interesting things went into the big cauldron of stirring up Breadwoman. But mostly I had this desire to wear bread and be this character. So I put a loaf of bread on my head and went to Westwood Market -- I was just in street clothes with this loaf on my head -- and I walked through the market to see what would happen. And I had a friend with me, who was the photographer, and people seemed to accept it, nobody freaked out, they just kinda looked -- I mean this was LA, this was West LA in the 80s, but they kinda knew me, they recognized me, they went, "Breadwoman! Breadlady!" People just accepted me. So for the next one -- I called them Breadwalks -- the next one was at the Farmer's Market in LA, and I walked through there with my friend and a little old lady was yelling at me, "Breadlady, go to the bread bin!" There's a booth there that sold bread, so she was trying to get me to go there. I walked through, I ran into another performance artist there who recognized me, and just as I was leaving and the security guards were coming to ask me what was going on, a bus load of Japanese businessmen and tourists arrived and they started shaking my hand as they got off the bus. So I have a picture of that as well, because they thought I lived there and that I was the official greeter for the Farmer's Market.

I guess bread is just such a universal thing...

That's why she's Breadwoman, because that's the language I thought I was singing in -- you know what I mean? The desire to wear bread, and the language that was bubbling up inside of me, like the chants and these little songs that were coming out of me, seemed connected. And I thought of my language as bread language, because it had that universal quality like bread. So, I think it's really interesting that there's this gluten intolerance -- drama! There's drama about bread and carbs and our need for nourishment, you know. It sounds whimsical, but there are really actual deeper meanings here. We're dealing with the quality of our food. It's like what's happening now has become so dramatic that our food is now a political issue.

So does Breadwoman have any official stances on gluten intolerance?

Breadwoman is radical. She's radical, because the root of radical is to go to the root. She's basic. She's all for nourishment. She's an advocate of true nourishment. No fast food for the soul.

How are the chants written?

Well they're not written...I think of bread language as like Hawaiian. The Hawaiian alphabet has twelve letters, and bread language is like that. It repeats a lot. It's simple like that. I think it's definitely an oral tradition, not a written tradition. So there's no written bread language. For me to learn my songs, the process was me singing into a cassette player and then playing the songs back, and learning them that way. The songs would just come to me, like when I was driving or washing dishes. Very basic, almost like a soundtrack. And I would just have to play them back and listen to what would come out, and I would even sing them in my sleep. So they were like dreamtime, waking time; they were always with me. I think of it as a cellular language --I used to say "invented language," but I didn't invent it; I found it. And I always knew it, and it kind of bubbled up to the top.

Do you think you're channeling anything?

Well the word "channeling" is kind of dangerous. So, I just think I am feeling deeply. And I tested it, and because it was so there and so close to me I couldn't see it, but I trusted it.

How did Steve [Moshier] get involved musically? How do you collaborate?

Well Steve was involved in an urban chamber orchestra called Cartesian Reunion Memorial Orchestra, called CRMO (Cream-O) for short. We were in the same circle...It was a very active scene. And I would go to the CRMO concerts in LA, and their music was not like any music I had heard before. Because their music was composed, it was formal, and very unusual. It was beautiful and strange. I was immediately attracted to Steve's music, and we immediately became friends. I played him a lot of my cassettes. And he, he chose the songs that were the most like sonic landscapes -- more atmospheric...So Steve took my chants -- [my chants] in which I didn't even breathe while I was singing --Steve arranged them and he placed them in a field of electronic music. He kinda stretched them out and looped them in a way that I didn't do, so he made them more digestible.

I guess the best way to describe the sound, in really introductory terms, is tribal-inspired, supposedly in line with your anthropological background. Was that your idea or was that Steve's doing?

I think it's a combination. Someone once said "Ancient meets post-modern." I think that's kind of where it is.

So there's no exact place where Breadwoman is from? Like she's not from the future, she's rooted in the past...

In a parallel dimension.