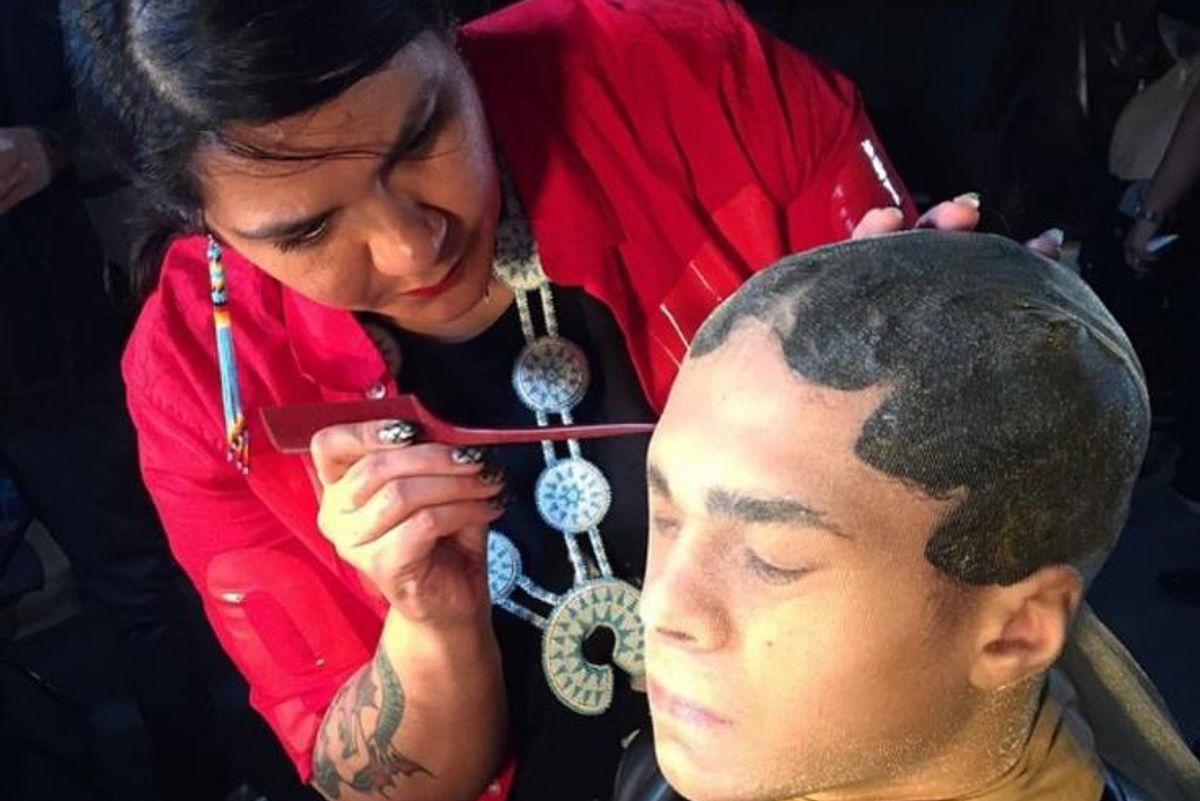 Amy Farid is a 38-year-old hairstylist who, from a very young age, has known who she is and what she wants. As an Osage Indian girl growing up in Wichita, Kansas, she found joy in DIY hairstyling and editorial shoots with her high school best friend. Today, Farid's achievements are things of dreams -- with hairstylist Laurent Philippon as her mentor in NYC, she learned the industry inside out from editorial shoots in Europe, backstage gigs at NYFW, and frequenting the studio of photographer David Lachapelle.

She's now the lead hairstylist for Hood By Air, and counts the likes of Victoria Secret, Calvin Klein, and M.I.A. amongst her clientele. Her out-of-the-box creativity, keen eye, and unapologetic pursuit for what she deserves makes her a badass role model for both indigenous peoples and the fashion industry alike. Below, we spoke with Farid about the power of young brands, sponsorships, and her space in fashion as an Osage woman.

Besides Hood By Air, which up-and-coming designers have you been working with throughout your career?

HBA is a big one because I've known Shayne [Oliver] for a really long time, since I lived up in Harlem back in 2000 – I met him when he was, like, fifteen. Shayne is my longest standing client from the fashion world. It's just amazing that HBA is what it is now. His partner Raul Lopez, who started HBA with him too, is also fucking amazing. Raul has his own line now called Luar. I have to say [Raul] is definitely someone who's new that I'm super stoked to be involved with. He's so exciting. I'm praying that I don't go anywhere so I can do his show next season.

I do love being there for those young designers. When it's that level, you don't have all these outside forces telling you what to do. The thing with HBA is they never cared and that's why the integrity is so incredible. I've worked with new designers like Chromat. I love my girl Becca [McCharen-Tran]. We had two or three seasons [that were] so good together, and their shit blew up. Whatever we wanted to do, we did, we didn't have to worry about things or money. It's beautiful – it's like the ultimate expression.

What are some challenges hairstylists face in this industry?

The struggle of the hairstylist and the makeup artist when you're in fashion and you do shows is that sponsorships trump everything. When Aveda's going to pay [Chromat] thirty to forty thousand dollars to do the hair for their show, they're not going to say no. Everyone needs money, I get that shit.

How do you stay connected to your tribal nation and traditions today as someone who moved to New York City?

Every June, my tribe has our ceremonial dances that are held back home. I go back for that every year. In New York, I try to participate in the local indigenous, urban Native communities here like the American Indian Community House. My [6-year-old] daughter Luna is friends with one of the Indian girls there, so she has a lil pow wow pal. For me, it's most important for my daughter. I grew up in Kansas and Oklahoma and it's such a bigger Native population. An integral part of your day is seeing Indian words, and here it is so much different. For Luna, I really like to be part of a community so she can have that feeling.

How has seeing the Dakota Access Pipeline resistance #NoDAPL affected you?

For me, the fact that people don't understand the fundamentals of this resistance of not poisoning water for generations to come, for me is mind boggling and so sad. There are so many people that make so much money from [oil]. It's so deep.

I see the support for the water protectors and it makes me so happy. People that I work with are literally driving up there right now to deliver wool socks or wool blankets. There's fashion people and stylists that are talking about treaty rights and I'm like, this is amazing. We need all the help we can get.

What about indigenous representation in fashion and media?

If I feel weird about something, I never let it happen. When I'm shooting a catalogue and I see headdresses, I'm like, this is fucked up. I call shit out. I'm a person that's not really represented here and I want other people in my family to feel like they have a place. They can be in any industry and they don't have to feel like they can't say anything.

I think there needs to be more positive, indigenous role models. There are tons of us in the world, and thankfully through social media, we have access to them. Growing up in the 90s, I didn't have any of that. Now, I'm so inspired and empowered by all the movements and the beautiful writing. I love [Dr.] Adrienne Keene from Native Appropriations. Positive representation of Native people needs to happen – us just being awesome, normal people in society because that's what we are. People just don't know about us because we've never been spoken about in history books correctly. I really want to believe that's coming.