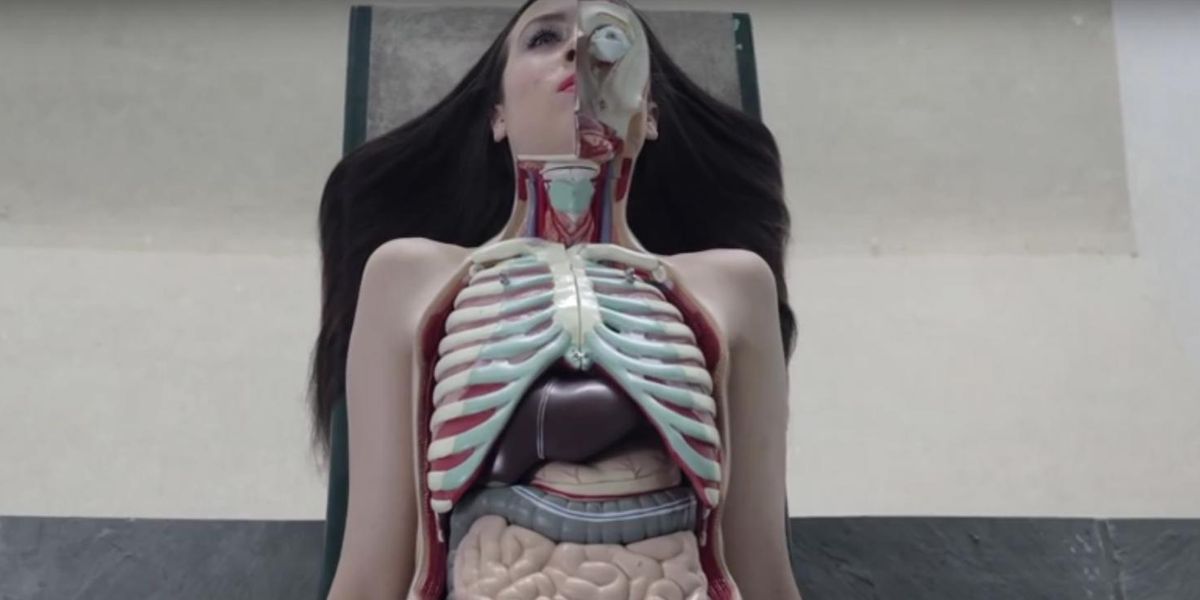 Medical-core: A Look at the Hospital Aesthetic Taking Over Everything From Instagram to Pop Music Videos

When London designer Bobby Abley styled models two years ago with silver cheek retractors -- a teeth-baring look pulled straight from the dentist's office -- he forced fashion to reconsider medical tools as being stylish accessories. Hood by Air took the eerie look a step further for its Spring/Summer '16 collection, designing sterile retractors with fetishistic "Babycore" overtones. This oddly reoccurring runway motif has been spotted in other pockets of the creative community, both online and IRL, from accessories sported on club kids to visuals in pop music videos to carefully curated Instagram feeds filled with tableaus of medical devices.

One such Instagram account, Safety Corp, uses sourced imagery from the medical and health professions to force viewers to appreciate the beauty in these often drab, clinical tools, accessories or contraptions. According to the account's anonymous creator, the feed celebrates all things "motionless, manufactured and heavily retouched." One Instagram post features a saturated yellow ice pack, carefully placed on a still knee; another showcases a woman wearing a white lab coat and using the emergency eyewash shower. All of these mundane, practical items are presented as artful objects outside of their everyday use and existing connotations, creating an unusual collection that somehow looks beautiful together.


Trans Chicago nightlife host and model Alessa Schmalbach shares this same appreciation, having used hospital accessories as an unlikely means for making her transition more comfortable. At nights out in local queer clubs, Schmalbach has donned everything from surgical masks to bandages, cheek retractors to nasal cannulas. At face value, this display could seem like a superficial attempt at shock, but for the young transwoman, these medical props hold special significance.

"When I decided to transition, I began reading all these medical journals written by doctors," she said. "I'd be reading these at 14 or 15, watching SRS surgeries -- bloody as hell -- and researching the technicalities of hormones. I wanted to know everything that hormones would do to my body in scientific terms, down to the molecule and catalyst that'd be triggered. I was obsessed for years before I decided to finally take the plunge and start testosterone blockers." Deeper into Schmalbach's transition, this curiosity intensified and began working its way into her wardrobe. She looked to Harajuku style and Marilyn Manson's "The Beautiful People"-era for inspiration, reveling in the ability to use these accessories to hide from the world when her transition fueled insecurities.

"When I'd just started transitioning, I wasn't okay with my chin shape," she said. "I thought it was too square and masculine, so I wore surgical masks to cover it. I bought a 50-pack from eBay and wore them everyday for two years as a security blanket during my transition. I liked the idea of hiding myself without looking like I was purposefully doing so. I'd add fake nosebleeds and cover myself in fake bruises and bloody knees."'

Since overcoming some of these transitional anxieties, Schmalbach said she now saves a majority of these looks for the club; cannulas and nosebleeds, however, are still regular daytime looks for her. It's not unusual to spot Schmalbach power-walking down the Chicago streets with the clear plastic tubing of cannulas laced behind her ears -- an outfit many would argue is better suited for the back of an ambulance, though she'll casually sport it in the back of a coffee shop.

For rising LA-based singer/songwriter Allie X, medical references are strung throughout her debut album COLLXTION I, though she can't pinpoint the central cause of this approach like Schmalbach could. "I have a history with doctors, so I think that must be part of it," Allie explained. "I don't completely understand where these lyrics come from when I sing them in the stream-of-conscious, gibberish way I sing words when writing a song, but I do like the way they sound."

In the pop singer's music video for "Catch," a lifeless Allie is seen posing as a human anatomy model like the ones that decorate college science labs. The track's lyrics reflect these visuals: "All I needed was the medicine, and you came knocking like a doctor," she begins. "Gave me the pill to take away the poison […] Stuck a needle right into the vein, you let me take it like a soldier." As the glistening electro-pop track surges, Allie describes herself as being "paralyzed," while her "heart attacks" in a metaphorical representation of the singer's experience with love.

"The lyrics of 'Catch' explore the relationship of a person and their doctor in a romantic sense, as if they were two lovers," Allie said. "I have always found it interesting the responsibility a doctor has; they often hold your life in their hands, yet they are trained to be robotic, cold and not become invested personally. Romantic relationships can feel like this, too. I have felt very sick and weak in the hands of doctors and lovers. 'Catch' is about experiencing that weakness, but planning to overcome somehow, someday when you're stronger."

We see this same medical motif star in her COLLXTION I cut, "Tumor," where Allie compares her lover to a tumor that she can't help but let grow. "When this is over, I'll need a surgery/ 'cause you are a tumor, you'll leave a hole inside of me," she wails. "'Tumor' compares the relationship between you and another person to that of a grotesque neoplasm that you have been aware of, but [have] chosen to ignore," she explained. "It was inspired by those TV specials on people with 50-pound tumors, who amazingly have chosen not to go to the doctors or get them removed -- the fear, fear of malignancy, fear of others' opinion of this grotesque part of you; fear of who you will become when the growth is removed."