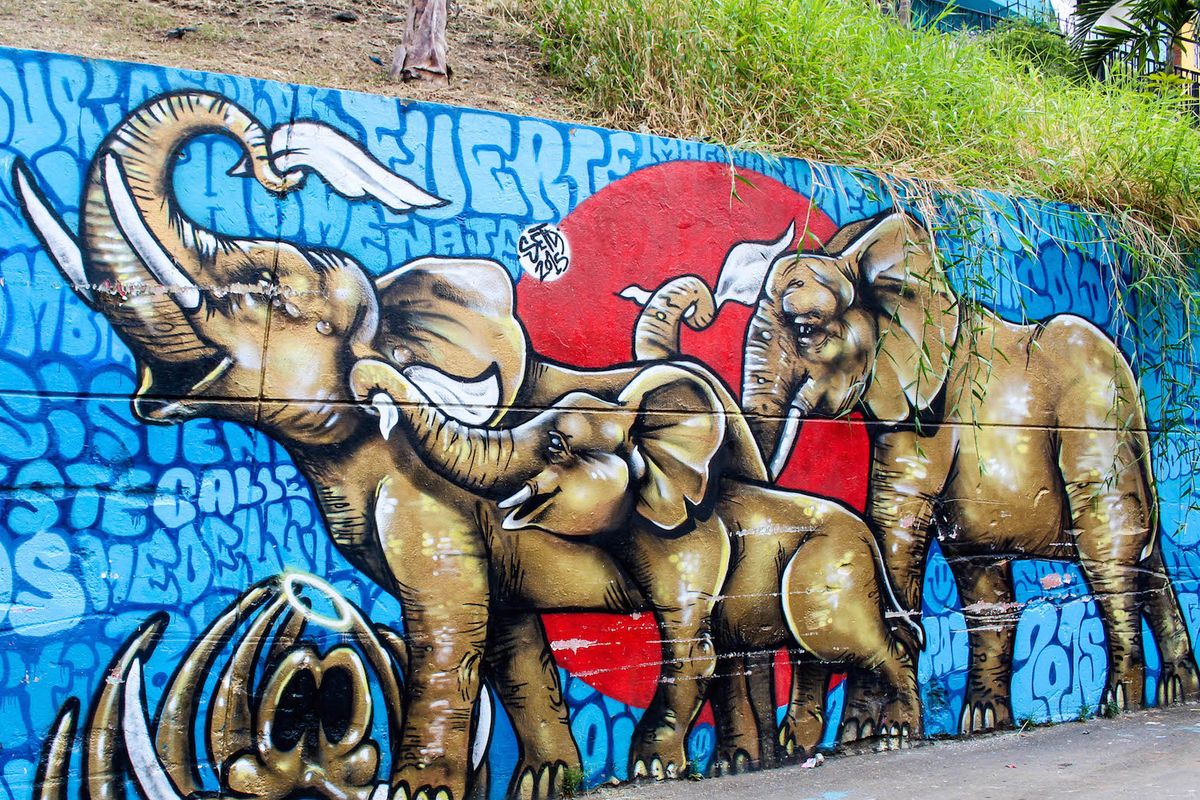 Why Medellín, Colombia Could Be the Next Major Art Destination

"In Italy, for 30 years under the Borgias, they had warfare, terror, murder and bloodshed, but they produced Michelangelo, Leonardo da Vinci and the Renaissance. In Switzerland they had brotherly love, they had 500 years of democracy and peace -- and what did that produce? The cuckoo clock."

Spoken by Orson Welles' character Harry Lime in the 1949 film, The Third Man, this point of view begs the question, "does great art and culture come from social upheaval or turmoil?" One of the strongest cases for this argument is today's Colombia. Mention the country to many people and unsavory stereotypes come to mind: cartels, guerrillas, civil wars, cocaine. That's just a few. No city has bore the brunt of that international infamy as much as Medellín, former home of Pablo Escobar. However, the bad ole days are over and you'll be more likely to find narco-warfare on Netflix's series Narcos than on the streets of Medellín. The city of "eternal spring" situated in a valley of Colombia's mountainous northwest region is undergoing a major renaissance, making it arguably one of these best places to be in Latin America right now. From an emerging foodie scene to a growing creative class, the people of Medellín have turned their turmoil into much to be proud of. The arts have always told the history of civilizations, their peoples, their struggles and there is no better way to chronicle the rebirth of this city than through its art scene, from the galleries to the streets. Here's why Medellín, Colombia is poised to be an epicenter of creativity in Latin America lead by their artists, institutions, galleries and street art scene.

Two of Colombia's greatest exports to the international community are literary great Gabriel García Márquez and Medellín-born artist and sculptor, Fernando Botero. On display in places like the Champs-Élysées in Paris and Columbus Circle in New York City, Botero's sculptures and his signature boterismo style of rounded, "fat" people, are well known amongst art aficionados and laymen. Evolving from the artist's' desire to create an abstract interpretation of his typical Colombian compatriots, you'll even see Botero's influence on young artists throughout the city using his boterismo style that has in some ways come to define a vein of Colombian art. One of the largest collections of his work -- 168 pieces in mixed media -- is housed at Medellín's Museo de Antioquia and the plaza in front of it, Plaza de Botero, with 23 stunning Botero bronze sculptures. Eighty-three years old and still working up to eight hours a day, Botero feels that an artist has a responsibility to tell his country's history. In Botero's case, he tells the world's history as his work spans from his early social criticism of Colombian life characterizing the Colombian elite and their ostentatious displays, to his 2004 exhibition of 27 drawings and 23 paintings dealing with the violence in Colombia as a result of the drug cartels, to his Abu Ghraib series in 2005 depicting the abuses at the prison in Iraq.

A work by Débora Arango

Another prolific, but internationally lesser-known Medellín-born artist is the late feminist painter, Débora Arango. Her work is a strong example of the vein of Latin American painting that portrays overarching themes of social commentary through shocking, almost confrontational expressionist depictions. Her work has touched on themes ranging from the harsh realities of a prostitute in a rented room to a laborer being beaten on the streets. Throughout her almost 80 year career, beginning in the 1920s, Arango offered political commentaries on Colombian society including the roles of women in public, the home and the church and the patriarchal society's apparent ownership of the feminine body -- she was one of the first women to publicly wear pants in Colombia -- the Catholic Church and dictatorships. Following the style of Mexican muralists popular in the 1940s like "Los Tres Grandes" Diego Riviera, José Clemente Orozco and David Siqueiros, Arango believed art had the purpose of raising the public consciousness. The Museo de Arte Moderno de Medellín (MAMM) is home to a large collection of Débora Arango's work.

Alongside Arango's work in MAMM is a current exhibition featuring pieces by the artist Antonio Caro, known for his pop art commentary on industry, commercialism and their effects on Colombia. With a background in the advertising industry, Caro's disassembling of common commercial visuals and use of repetition is almost Warhol-esque. Using text as a tool to convey strong messaging and political critiques of the current state of affairs in his country, Caro emblazons posters with sayings like "Todo está muy Caro," a play on both his name and the idea that everything in Colombia is very expensive for the working class. Other works include a riff on the Colombian flag with the word minera written on a field of black in gold, commenting on the mineral industry stripping Colombia of its natural resources and not returning wealth to the people that till the land. Still others feature the words Colombia written in the Coca Cola logo or the similar "Colombia-Marlboro," two pieces that offer a critique of Colombia's imperialistic relationship with the United States. A lover of t-shirts and the commercialism they represent -- he's even done an exhibition about his vast t-shirt collection -- much of the art that Antonio Caro creates can be worn on a shirt, spreading the message and his critiques to a mass audience.

Many of the museums and art institutions in Medellín do a wonderful job of integrating the country's art history with its contemporary art. One such institution is the Museo de Antioquia, which houses one of the largest collections of works by Botero. The museum and its director, Ana Piedad Jaramillo, seek to explore the meaning of Medellín's transformation through contemporary art and, in the words of Jaramillo, its "power to state, to describe, to narrate and more importantly to reflect critically" with its most recent program, MDE15, the International Art Encounter of Medellín. With 59 national and international artists from 21 different countries, the exhibition explores topics of violence, conflict and memory, local stories in global context, dynamics of power over the body, the use of satire or humor to question typical institutions like schools, museums, religion and family.

Medellín's Museum of Modern Art (MAMM), located in a former smelting plant is another cultural center in the city. MAMM's embrace of mixed media and diverse formats for digesting and understanding art sets it apart as one of the few institutions committed to exploring the current state of affairs in the city's artistic community. Their desire to highlight less conventional artistic mediums can be found in one of their most recent exhibitions, Jagüey by Leonel Vásquez, a sound exhibit highlighting the sounds of water and the changing landscape of the Guajira region. It is also the third installation project in Lab3, an effort by MAMM to strengthen art institutions' recognition for the technological and sound arts. In addition to their rotating shows and permanent collections, MAMM plays host to daily screenings of independent films, discussion panels, DJ nights and creative programs for children.

Another strong example of art's dissemination to the people of Medellín is the street art and graffiti culture in the city. From metro stations like the University station with the "Medellín Paints Itself Alive" project to whole communities like Comuna 13, much of the public wall space is, in a way, given back to the people to see a reflection of themselves and their story. In the case of Comuna 13, this area was once the epicenter of extreme violence during the narco wars due to the neighborhood's strategic position off of the highway leading out of the city. In recent years, an urban renewal project brought a metrocable and an escalator to the neighborhood replacing the 350 very steep steps that were once the residents' only way to reach the main city. The government also commissioned Colombian street artists and Latin-American and Colombian crews to cover the public spaces of the neighborhood and around the escalators with murals that tell the story of Medellín and the Colombian people. Upon entrance into the community the first mural you see tells the tragic story of the once almost daily shootings that took place in the area. A front line of animals, an eagle, an owl and three elephants (a symbolic nod to their memories) protect the community, holding up white flags letting those that enter know that Comuna 13 is now a place of peace. Beautiful murals celebrating the features of indigenous Colombians line the hillside walls as you journey further into Comuna 13 and upwards towards the escalator. However, while government sanctioned, these are street artists and subversion and protest is a part of the nature of the art form. Those seemingly sweet pineapples you see? It's a pineapple grenade, a motif prevalent in a lot of Colombian street art that's used to protest United Fruit Company's interest in the country and the related U.S.-Colombia trade promotion agreement made in 2012, which citizens view as hurting Colombian farmers' abilities to earn a living and compete in the marketplace.

With the urban renewal comes a high priority on public spaces and Medellín is home to many library and parks. These parks have high-design elements such as interactive art like Parque Explora and Pantalla de Agua, a 16 x 52 foot freestanding water screen located just behind the Pablo Tobón Uribe theatre. Its 7,200 fine water jets combine to make a liquid screen that the city projects movies, music videos and other audio visual effects on every afternoon and evening from Tuesday through Sunday.

The museums and other institutions are not the only ones shaping the way young people consume and experience art -- there are a slew of young professionals from the fashion and tech industries as well as young artists and architects all contributing to the creative landscape. One place you'll find these young creatives gathered is the Blue House, a hybrid design store, showroom, gallery and coffeeshop and one of the first of its kind in the city. You'll find beautiful art work, furniture and more, all made in Colombia. The team behind The Blue House also have an architecture and interior design firm, 5 Sólidos, with offices overlooking the space.

Another place that's fast becoming a Medellín institution for innovative art consumption and culture is the Charlee Hotel. When many in the international hospitality industry shied away from the city, the Charlee's owners and founders were forward-thinking enough in 2008 to see Medellín as a place on the brink of change and in the midst of major revitalization. Seeing this movement as driven by the people of Medellín and art as the lens of social change, the Charlee's designers made art, and particularly the art of Colombians, a high priority in their design. The Charlee is where the aforementioned new creative class goes to be seen, whether it be at the hotel's rooftop bar, its extremely popular gym -- known at the place where the beautiful people in Medellín work out -- or its Studio, a members-only social club. A pioneer for the boutique hotel industry in Colombia, The Charlee is a high-design hotel with the facade and much of the interiors for the public space done by muralists and artists from Colombia like Bryan Sánchez, who did the facade as well as its restaurant Envy, and Barranquilla-based art collective Polstro Pistro. The lobby and salon space also function as a gallery displaying an often rotating selection of paintings and sculptures from local artists currently for sale.