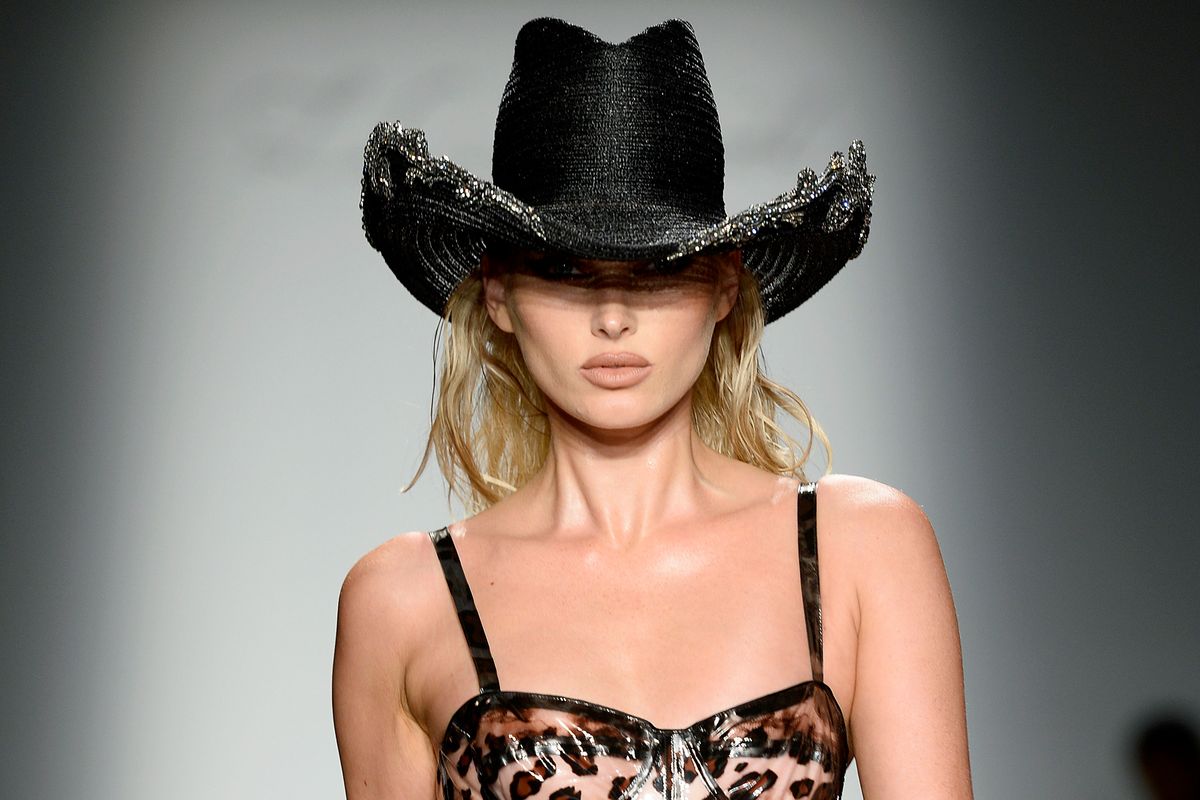 This year at NYFW "the LaQuan Smith woman" was a ruthless, unapologetic modern vixen. Models tromped down the runway in cropped T-shirts bearing Laura Dern from Big Little Lies' war-cry "I will not, not be rich," animal-print latex, chaps and 10-gallon hats. Although cinematic and sultry, the looks possessed such sense of luxury that you can easily picture Monterey bourgeois mom Renata Klein 'fitted up in the leopard-print bustier and snakeskin pencil skirt ensemble, blowing on a smoking gun after murdering her nanny-fraternizing husband, before she hops in her Prius and heads to Mexico. That was the vibe.

Matthew Mazur, aka Mazurbate, was tasked with interpolating that vibe into a 15 minute mix. The DJ and longtime stylist for Kim Petras previously has worked before with Smith on runway soundscapes. This year, he delivered with usual perfection, stitching together with fittingly brutal ragers from some of pop's most powerful vixens — Charli XCX, Azealia Banks, Nicki Minaj, Maliibu Miitch and Missy Elliot. These artists, like the looks, embody the visage of a woman who's not afraid to frighten people, and determined to get hers in an unfriendly world.

The mix is deliberately not seamless however. Whiplash transitions and provocative movie soundbites (for instance, of Michelle Pfeiffer in Scarface, assuring Tony Montana she doesn't "fuck around with the help" and of Vivica Fox trash-talking men in Two Can Play in That Game), flesh out the femme fatale characters of the models walking the runway. The show's breathless but playful danger is heightened even further by a cut of Ennio Moriconne's theme song from The Good, The Bad and The Restless.

The mix's crown jewel, however, is when the Renata Klein's spitting delivery of "I will not, not be rich," leads right into the intro notes of Billy Joel's "Uptown Girl." The mix ends perfectly with a cut of Toni Braxton's sweet and tender, "How Many Ways." You don't want to mess with the LaQuan Smith woman, but she can also have a great time, and let her guard down when she wants to.

PAPER chatted with Mazur about creating the mix, the Big Little Lies-Billy Joel transition, and what a great runway soundtrack can do.

What's the story behind this collab? How did you and LaQuan connect over this?

We've been working on soundtracks for about three seasons now so we're family!

What was your and LaQuan's conversation about the sound of the show like?

Initially, there wasn't a real prompt but there was more a western direction to the collection which I was excited to explore — I actually love soundtracks of old Westerns and the New Wave type from Quentin Tarantino as well.

There was this subtle feminist statement of show, rooted in this idea of a unapologetic, determined, ruthless woman. How did that figure or idea inspire you? There are so many powerful pop and hip-hop queens on the mix.

LaQuan's clothing and the LaQuan woman is unapologetic. We are both very inspired by the women around us ,as well as the women who create this music. We would even take certain songs that were originally by men, but find the female version, for example the Nicki version of Pop Smoke's "Welcome to the Party."

There were a lot of fierce, aggressive bops, but it concludes with this moment of tenderness with Toni Braxton. Was that intentional?

Super Intentional, LaQuan and CD of the brand Kyle Bryan wanted to switch up the pace at the end, and have everyone walk slow and "wet." "Wet" was the word they kept using and so we went complete Toni Braxton — the actual BPM of which was slower than all the other songs used in the soundtrack, which gave it this sultry kind of "Now I can breathe" moment.

LaQuan's looks were so cinematic, whether drawing on Westerns or e Showgirls or Big Little Lies. We hear Scarface and Two Can Play At This Game in the mix, as well as movie score master Ennio Morricone. How did you pick these movie soundbites, and what were you going for in those cinematic moments?

Anyone that knows me knows that I'm really dramatic so this is clearly a match made in heaven. When I heard that the show had a western influence, my mind immediately went to the main theme from The Good, The Bad and The Ugly be Ennio Morricone. Although a smooth transition is nice, an abrupt one, to me, gets the point across more clearly especially with the message behind LaQuan's clothes.

The transition from Laura Dern's line in Big Little Lies, "I will not, not be rich," to "Uptown Girls" was inspired. How did you come up with that?

I was just playing around and figured this would be one of the most dramatic transitions and knew that people would immediately recognize both. When I combined the two, I realized that power it had and knew the audience would be as wow'd as I was.

What do you think makes a successful runway mix? How was the response and overall experience of the show?

I think it varies — some runways have one song on loop. Some have live orchestras. It just goes with what the designer is feeling at the moment. When you are working with a sound designer, however, it is a collaboration and a dialogue and it is both parties responsibilities to educate and learn from each other. It's not a one way street. Every time I make a show mix, I try to show as much range as possible. I'm well versed in every genre of music, and the soundtracks reflect that. I realize when I sit at a show, the power music has, it can make the clothes look better or worse, and if you combine the two where they are at their peak, it is magical and can give chills. For example: when the lights came on and Elsa Hosk turned her head and started walking right when Charli XCX's "Vroom Vroom" blasted through the speakers.

What else are you up to this NYFW?

I have a few more parties I'm doing and shows I'mm attending — then celebrating my birthday, as I am a Virgo!