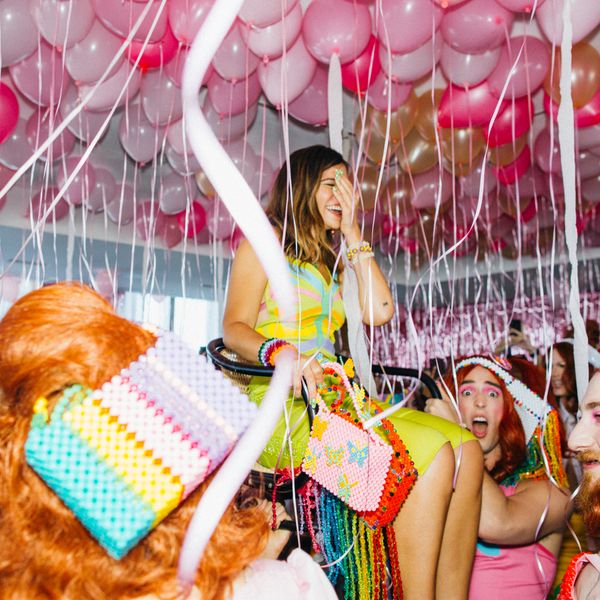 Mazel tov to designer Susan Korn, who held the most delightful presentation at fashion week for her much-Instagrammed brand Susan Alexandra. The event took the form of a bat mitzvah at the Public Hotel. A bat mitzvah at fashion week! There was a pink balloon tunnel and awkward dancing to the macarena and canned Babe rosé, a more palatable alternative to Manischewitz. It personally took me right back to seventh grade, the most socially active year of my entire life. My own bat mitzvah had a Moulin Rouge theme. There was a cardboard windmill.

Susan Alexandra is best known for its beaded bags – like modern, more affordable takes on the designs of Jewish grande dame Judith Leiber–and playful jewelry, both of which launched scores of imitators (the bags were everywhere at the bat mitzvah, including one in the shape of a martini glass and in the form of an enormous balloon sculpture). But for spring/summer 2020, Korn launched her very first ready-to-wear collection – she told Vogue that "these are the clothes that I wish I could have worn to a bat mitzvah when I was 13 and what I still want to own now."

The clothes fit right in with the accessories. The Susan Alexandra aesthetic is cheery and shiny, a bit '60s sans Mansons. Many of the pieces in the collection — like a shift dress with scalloped hems, a crop top heaving with beaded fruit, and a slip skirt with long beaded fringe — feel like something Fran Drescher would have worn on The Nanny, the highest of compliments for any Jewish girl with big hair and a Loehmann's problem (RIP).

The presentation just made people so happy. It was full of pointed signals to New York Jewish culture: a tower of Dr. Brown's Cel-Ray soda with a photo of Mike Myers' in drag as his seminal SNL character Linda Richman; bagels from Baz, where Korn held her last presentation; schmaltz-y popcorn; beaded yarmulkes (activist Adam Eli was dressed as a rabbi); a pie from Williamsburg Pizza embellished with a ricotta Star of David. Korn's models even hoisted her in a chair for the horah.

Models at fashion presentations tend to look more than a little tortured — they traditionally have to stand in heels for ages, the pain palpable on their faces (the heels at Susan Alexandra came courtesy of Dolce Vita). But the Susan Alexandra models got to mingle and dance, having a better time than anybody else. They wore big red wigs and headdresses incorporating the famous purses. And Korn's casting could not have been better — the presentation featured comedians like Benny Drama, Cat Cohen, and Lauren Servideo; photographer Hunter Abrams; drag performer and frequent Susan Alexandra collaborator Steak Diane; influential hairstylist and Vacancy Project salon owner Masami Hosono; and writers like New York Times editor Jazmine Hughes and widely-beloved New Yorker staffer Naomi Fry.