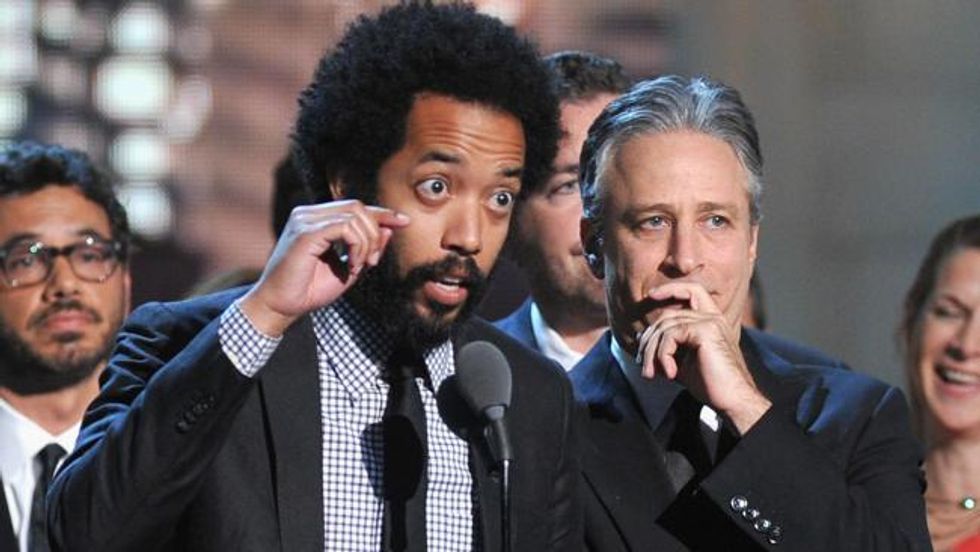 by Eric Thurm
PAPERMAG
As Jon Stewart's departure from the chair of The Daily Show -- a position he has held for almost four full presidential terms -- draws nearer, it's natural for nostalgia to kick in. "What will we do without Jon Stewart telling us what to think about stuff?" liberals will cry while running around like chickens with their political heads cut off, nervous that controversial replacement Trevor Noah won't prove as effective a moral compass. This is a good thing.

Somehow, by a trick of the culture and the particular political climate during the Bush administration, Jon Stewart -- a comedian and the host of a fake news show -- became one of the major consensus moral centers of America. That's kind of insane. It's also unsustainable. Staying in that position for so long without moving leads, by necessity, to a kind of stasis. And holding the moral high ground for over a decade can make you an asshole.


"Yikes" doesn't even begin to cover it.

It's not surprising that to hear that Jon Stewart might be kind of a dick -- you have to be in his line of work, and it obviously helps to be overly sure of yourself if your job is to go on television every day and spew opinions and judgments about people (this likely applies to many writers, too). What's not acceptable is the refusal to listen to literally the only black employee in the writers' room about a matter that explicitly and exclusively pertained to the show's representation of black Americans. That's just being an awful, no-good, rotten ally.

On the most charitable reading of the story, it sounds like Stewart can barely even consider entertaining the possibility that he and the show could be offending the groups he purports to care about -- he refuses to admit he might be fallible, even though his job is to wade into uncertain waters night after night. For even the most sensitive people, a run at his job would entail at least one flub, because that's just how people are -- ignorant and frequently insensitive and oblivious, even when they mean well.

What matters is how you respond when you get called out for those flaws, and the suggestion that Stewart was so trapped in his role that he couldn't escape his own head -- like the mummy presiding over a beautiful pyramid that's also a tomb -- is a more than sufficient argument that, yes, it was time for him to go. All indications are that Stewart is going to spend at least part of his retirement chilling on a farm. Let's hope that the time is well spent, and that he has some space to consider the limits of his own perspective -- and that we all have the strength to do the same.
You May Also Like
Care