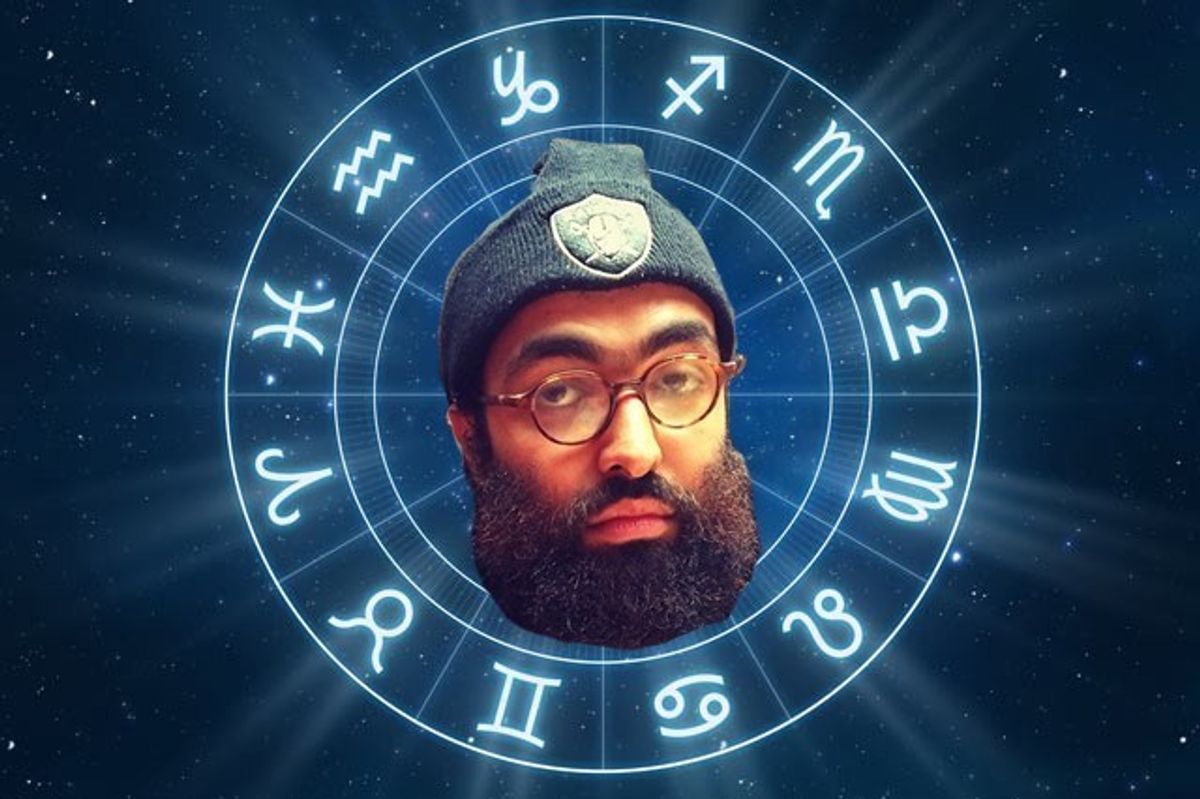 Kool A.D. Forecasts Your May Horoscopes

Buy some purple shoes in memory of Prince. Watch gleaming the cube. Start a drone delivery service. Train pigeons to sit on them so the pigeon feels what it's like to sit shotty for once. One time I said that culture was a network of excuses. Not sure if that, or anything, is true. Bless up mane love is everything. Cop that new KOOL A.D. it's wild philosophical.

Privacy is a myth so u might as well publish all drafts. The Notebook, furl meh? Ain't no rehearsals mane it's all the show. Get a oil change. If ur lite skint but still "of color" ur allowed to go one shade darker on ur prayer hands emoji for effect/cultural reasons. The new Beyoncé was OK. Last Beyoncé album was better. I didn't like the Jack White song and I actually do dig his other music but they sounded pretty corny together on this one. There was another one that was kinda country that I wasn't feeling for whatever reasons. Feel like that's prob the one the Dixie Chix covered. Kendrick joint on there was decent. New Kendrick go hard. Last Rihanna album was most fire tho actually. Feel like next Jay-Z album might be his first hitter in years, and I say that as a Jay-Z fan. Need some new Solange too tho. New Iamsu and Ferg joints are p tite. Consider The World Fair as a broad concept. Also cop that new KOOL A.D. over at https://koolad.bandcamp.com/album/real-talk.

Shelter is a universal human right. Occasionally the greater nature of the ecosystem impinges on the subjectivity of human nature, tho the one springs from the other. Flux is push and pull at once. Plus also yap up that new KOOL A.D.

Afford urself moments to go off grid, off radar. Save some of ur juice for u, ur liable to give it all away on the sample tray if u don't check urself. Simplicity is always available on ur demand, it just requires pause. Go straight thru the fields of ur mind to the river's edge, feel me? Also cop that new KOOL A.D.

Beauty is essential to travel. Sometimes travel is languorous and lush. And that's what's known as life. Pursue happiness at ur own pace but don't be afraid to arrive too early. Everything really is everything. If u think the phrase "everything is everything" is corny then it is in fact YOU who is corny. Let go of emotions that distract u from ur ability to perform ur personally meaningful labors. Hit the Doja and handle ur fears. Sweeten up like an apple in the sun. Bless up, u a truly cherishable soul. If u a female Gemini, get sassy this month. If u a male Gemini just turn up in general I guess. Plus cop that new KOOL A.D.

The World Is A Vampire, word to Smashing Pumps. Naw jk the world is the world, everything is everything. Literature is an invisible architecture. Do a solo show of ur paintings in an airplane hangar. COP DAT NEW KOOL A.D. Also cop the whole discography on iTunes, Apple, Tidal, Spotify, etc.

Context is an element of style. Time is a medium. 'Is' as 'As.' The graphic natures of language. The poetics of font. How many bullet factories on earth? Read some Neruda. Laughter is a positive violence. Dance is evolved laughter. Joy is devolved desire, revolved back into positivity. Every problem is its own solution refusing to believe in itself. These are some extractions and elaborations from that new KOOL A.D.

Be kind and courteous mane, everybody got they own lil skruggle. Bless up, peace is reality. Do ur thing. The intrinsicality of love is natural. Love is a shimmering diamond, prismatic. Love is a sweet fruit tree, baby. Cop that new KOOL A.D.

U ever feeling low just go to the rich part of town, find the most expensive car and steal it. Love is a yin yang. Watch Finding Nemo while listening to Fela Kuti. Peace to the Purple One, listen to Prince all month. I think the last Prince show on this realm was in Atlanta at The Fox Theater? Just him on a piano, it was lit, find that recording, listen to that. Oh also cop that new KOOL A.D. over here.

Human labor is ceaseless. It nearly outpaces itself. Parables, bars, the bars of the of the cell, cold, smooth, almost comfortable. Human language is constant. The patterns evolve and change. Extralinguistic communication mane. Truth temporal. These are lyrical extractions from that fire new KOOL A.D.

First off cop that new KOOL A.D. Also those last two Party Animal albums, give those another listen: https://partyanimal.bandcamp.com. Also take some Adderall and draw a 24 page comic book in 24 hours. Read Frantz Fanon's The Wretched of the Earth one mo' 'gain. This is a good month for fasting and meditation. Smoke some weed, drink some tea.

Capricorns gota dine and dash this month. Truth elaborate. If u tip with a 100 dollar bill it's a bet that u'll deserve a free meal next time. Karma is an energy older and stronger than human consciousness, beyond the suppositions of our mathematics. Skip the coffee, hit the tea, then end of the month, switch back. Love is a yin yang bruh. Plus also cop that new KOOL A.D. over here.