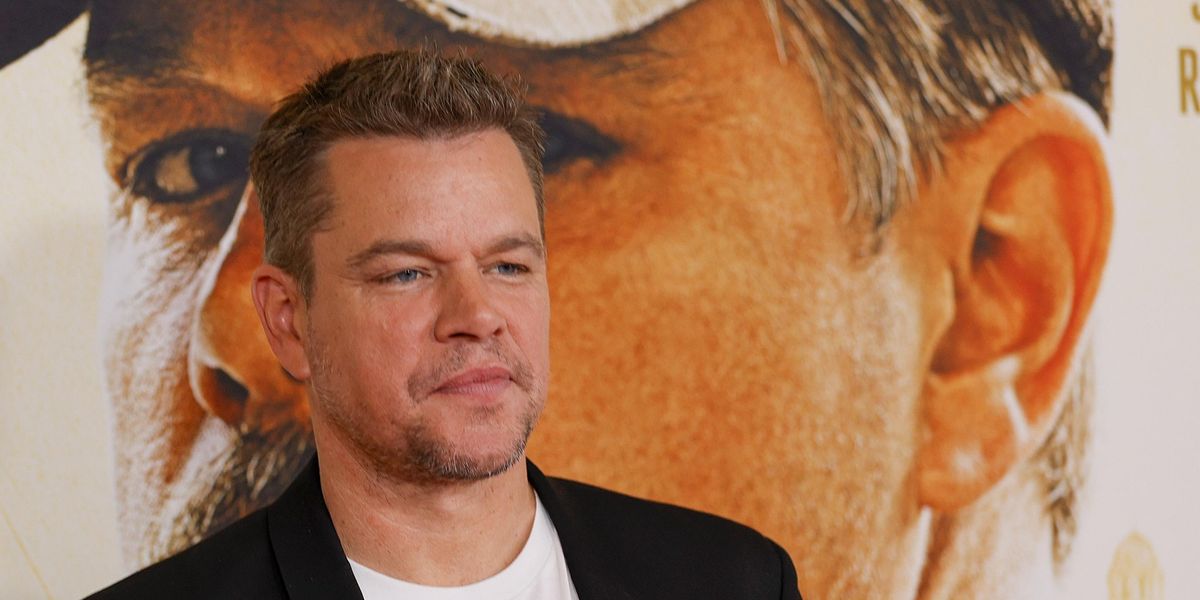 Matt Damon is facing criticism for only recently learning that the F-word was bad.

For some unknown reason, the actor decided to admit in a new interview that he was still using the homophobic slur in the year 2021 and, apparently, it took his daughter typing up a "very long, beautiful treatise" for him to actually stop.

"The word that my daughter calls the 'F-slur for a homosexual' was commonly used when I was a kid, with a different application," Damon told The Sunday Times. "I made a joke, months ago, and got a treatise from my daughter. She left the table. I said, 'Come on, that's a joke! I say it in the movie Stuck on You!'"

Naturally, his daughter was horrified enough to pen the explanation about "how that word is dangerous," which supposedly convinced Damon to "retire" the slur as he finally "understood" the gravity of its use. And the ironic part? A clueless Damon told the not-so-flattering anecdote as part of a comment about journalists taking quotes out of context for "clicks." You know, despite this being "exactly the sort of anecdote people make headlines about," per the writer.

As a result, a large portion of the internet spent the day wondering A) why he thought it was a good idea to share this story, B) why this only happened "a few months ago" and C) why a child had to educate him on the matter, with people like representative Laurie Pohutsky commenting, "I have ranch dressing that has been in my fridge longer than Matt Damon has NOT been using a homophobic slur and he somehow thinks he deserves praise for this Herculean effort."

I have ranch dressing that has been in my fridge longer than Matt Damon has NOT been using a homophobic slur and he somehow thinks he deserves praise for this Herculean effort. https://t.co/hG4JcjyRLb

Elsewhere, others continued to raise their eyebrows at how he only "recently realized slurs are bad and asked "what word Matt Damon has replaced f****t with," while a third aptly noted, "the funniest part of the matt damon interview is when he says that "f*ggot" meant something different when he was a kid bc bro no it didn't."

I want to know what word Matt Damon has replaced f****t with.

the funniest part of the matt damon interview is when he says that “f*ggot” meant something different when he was a kid bc bro no it didn’t pic.twitter.com/6tMEKVTssN

That said, Damon issued a statement to Variety on Monday afternoon in which he claimed he's never used the F-word in his "personal life."

"This conversation with my daughter was not a personal awakening. I do not use slurs of any kind," he said. "I have learned that eradicating prejudice requires active movement toward justice rather than finding passive comfort in imagining myself 'one of the good guys'. And given that open hostility against the LGBTQ+ community is still not uncommon, I understand why my statement led many to assume the worst. To be as clear as I can be, I stand with the LGBTQ+ community."

Additionally, Damon went on to say his comments were misinterpreted as the discussion with his daughter was an attempt "to contextualize for her the progress that has been made" since he was a child in Boston hearing "the word 'f*g' used on the street before I knew what it even referred to." He then went on to say that what his daughter expressed "incredulity" over the fact that there was "a time where that word was used unthinkingly."

"To my admiration and pride, she was extremely articulate about the extent to which that word would have been painful to someone in the LGBTQ+ community regardless of how culturally normalized it was," Damon added." I not only agreed with her but thrilled at her passion, values and desire for social justice."

Read Damon's statement, here. You can also see what other people have said about his initial interview, below.

Also, WHY is he sharing this story? How does this make him look good?

"I was a raging homophobe until the precise logic of a *checks notes* child informed me there are more subtle ways to be a homophobe"
-Matthias Damon, 2021

Everybody:
The national news media:
The trades:
TMZ:
Matt Damon: Y’know I said f*gg*t until like last Tuesday?

Just outstanding that Matt Damon told his "I learned not to use a homophobic slur at 50" like it was a heartwarming anecdote of lifelong learning. Like your nan enrolling in a watercolour class at the local college, but for not saying the n-word.

The fact that Matt Damon’s daughter had to explain to him that saying a slur is wrong is insane pic.twitter.com/KeOIlxRZP8

So Matt Damon just figured out "months ago", by way of a "treatise" from a child, that he's not supposed to say the word f*ggot.

*on the phone with a major paper* my PR person said not to mention slurs but I think my relationship to them is particularly beautiful https://t.co/wBlH35DN8n

matt damon is from boston. when he said he was retiring the f slur from his vocabulary he meant he was hanging its jersey from the rafters in honor

Editor's Note: This article has been updated with new information.