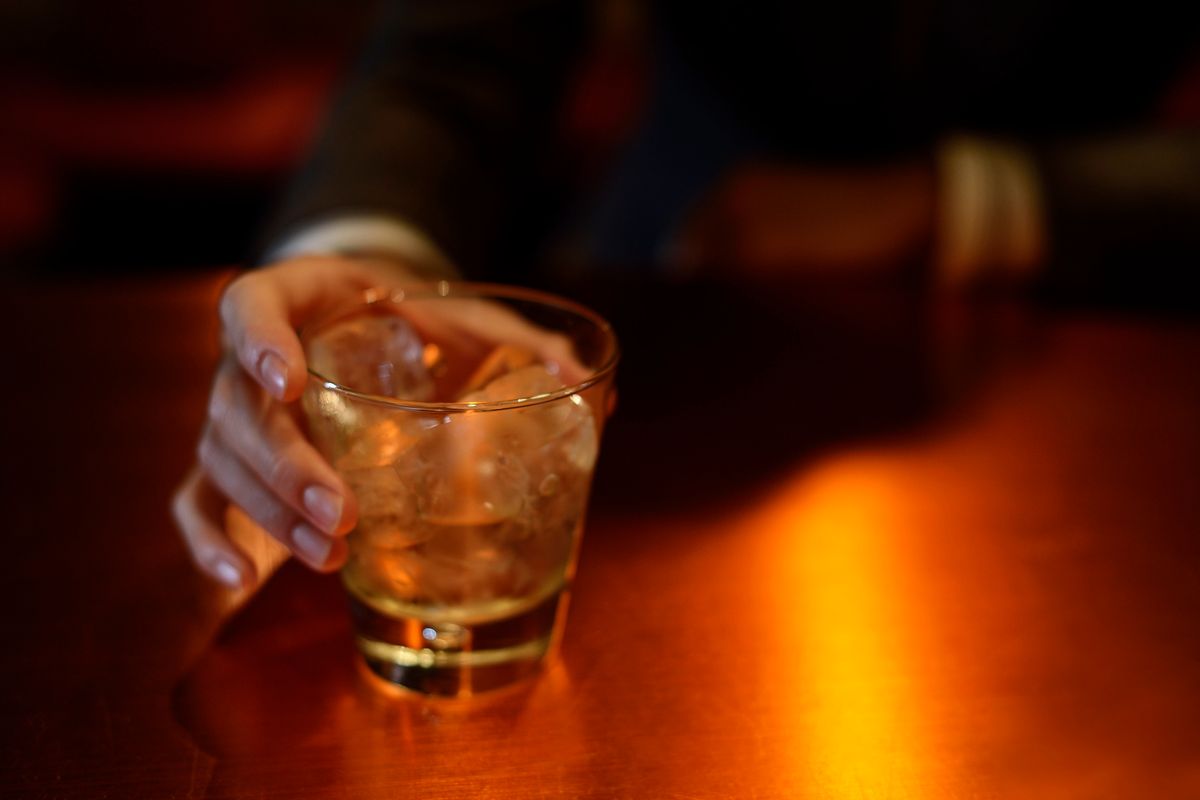 Over the weekend, a tweet describing a new policy being implemented by Marriott hotels went viral due to its discriminatory undertones that targeted single women staying at their properties — and, needless to say, the Internet was not happy with the implications of this move.

"So apparently the Marriott Hotel chains are directly working with the feds and keeping eye on any women who are traveling alone," Twitter user and escort Veronica Santos wrote. "Some are also not allowing some women drink at the bar alone. All to stop 'sex trafficking.' The Marriott's social media team confirmed in a now-deleted tweet that a policy of training employees how to 'spot a escort' was put in place to "spot sex trafficking at our hotels."

And according to an official press release, about half-a-million employees thus far have undergone training. However, as Santos points out, a lot of the identification criterion seemed "pretty weird" to her. PAPER reached out to Marriott for additional comments, but their remarks echoed the original press release.

"Some things listed were not speaking English well, having sex toys, condoms and lube, asking for extra towels and sheets and not wanting housekeeping in your room," she tells PAPER. "When I saw that, I realized how dangerous that could be for pretty much any woman, especially [trans women, as well as Black and Brown sex workers traveling] alone and booking a room at any Marriott hotel, because the tips just seemed very subjective."

This only seems to be the tip of the iceberg in terms of restaurants, hotels, and other businesses recently shutting out single, female patrons for fear that they are potential sex workers. Earlier this month, Nello — a chic restaurant on NYC's Upper East Side — came under fire after allegedly banning a female executive (and Nello regular) from dining alone at the bar as part of effort to "crackdown on hookers." Not only that, but in the wake of Santos' tweet going viral, several people have come forward to allege that other hotels had similar policies and training protocols for employees that included such broad-reaching things like "look for acrylics."

@amargadaxo Diff hotels did this a couple years ago when I was working, some of the tips include "look for acrylics"
— venice bitch (@venice bitch)1548438645.0

And while Marriott's aim is obviously noble at face-value, oftentimes broad policies like this harm far more than they help. As many critics online pointed out, though aspects of the training appear to be useful — such as instructions to look for people who aren't allowed to speak for themselves or those lacking proper identification — to extend this sort of scrutiny to the millions of women who choose to travel or enjoy a drink or meal alone is borderline ridiculous.

"Our community has some of the most marginalized in our society, so doing things that could potentially harm the livelihood of sex workers doesn't really matter to folks because we are seen as disposable," Santos muses. "But we are actively seeing how attacks on sex workers quickly becomes an attack on all women. How are people going to be able to differentiate between a sex trafficked victim and a woman traveling alone or eating dinner alone or just having a glass of wine alone? We are just the entrance to something that can and will get bigger if we allow it."

"Doing things that could potentially harm the livelihood of sex workers doesn't really matter to folks because we are seen as disposable."

As we've seen happen with things like Tumblr's adult content ban and legislation like FOSTA/SESTA, blanket initiatives meant on their surface to protect victims perpetuate misconceptions surrounding sex trafficking and, in turn, end up impinging upon the livelihoods of independent sex workers. As Santos points out, policies like the Marriott's only serve to push independent sex work further underground, thereby endangering the well-being of those they target as "we know the history of violence that comes with calling the police on a sex worker." These policies can also "minimize" the experiences of those who are actually trafficked, Santos says.

"Trying to police women's actions will not stop sex trafficking," Santos reasons. "It also gives people this savior complex, where they believe that all sex workers need to be saved because they think we are being abused. Reality is, plenty of sex workers choose this work and really enjoy it."

"People who profit off sex workers or traffic people into sex work should be prosecuted and held accountable, but for so many women... this is a choice made freely," she tells PAPER, adding, "It is removing the freedom for women choosing to do sex work. It's giving power to the idea that men control women's bodies — that body autonomy is irrelevant in the government's eyes.

Additionally, King asks why policies like these don't appear to scrutinize single men or potential male sex workers in the same way.

"What if a couple of men come up and ask you if your seat is taken or want to buy you a drink and that somehow translates to you being a sex worker, and therefore booted from the establishment?" she points out. "Why are male sex workers not being looked at or treated the same? Because they won't 'look' like a sex worker?"

"This is targeting an entire industry and gender. It goes beyond just sex work," King says. "Women have been fighting for the same rights as men for too long, and this is setting women back. It's setting society back."

That said, Dr. Kimberly Mehlman-Orozco, a renowned scholar who has served as an expert witness in cases related to human trafficking, believes that we shouldn't be too hard on Marriott in this situation. Because while she disagrees with the methods currently being put in place — as the potential for false positives is so high — Dr. Mehlman-Orozco says the Marriott's actions are a result of recent civil litigation that attempts to pin responsibility of trafficking on businesses that, most of the time, unknowingly facilitate sex trafficking, rather than on sex traffickers themselves.

And while there is something to be said about keeping an eye out for potential victims of sex trafficking, there are far better ways of approaching what could be deemed a suspicious situation. As Dr. Mehlman-Orozco notes, a lot of anti-trafficking training conflates independent sex work and trafficking, which is "problematic" as it "creates an emergency situation based on training or information that hasn't been verified or validated" by third party experts. This is especially true when it comes to training like the Marriott's, which is focused on "best practices" — or adhering to guidelines that, in reality, haven't really been "tested or evaluated through rigorous research."

"Human trafficking, compared to other types of crime, has a strikingly low amount of empirical research done," Dr. Mehlman-Orozco says. "We really don't know the efficacy of intervention [like Marriott's] and the results that are out there aren't looking very promising [in terms of] actually reducing these kinds of cases."

Not only that, but Polaris, the organization Marriott has partnered up with to receive training from, "offers training that have not been tested by academics like myself."

"[Polaris is notorious for not] allowing external evaluation from third parties," she notes, though she admits the name carries a lot of weight. "But if you're invested in really combatting this issue, you should be concerned with the efficacy of [your methods], especially if you're truly trying to combat trafficking."

Even worse, it's evident that there's a knowledge gap in terms of how to actually handle potential instances of sex trafficking once they are ostensibly identified. From training literature provided by a Marriott spokesperson to PAPER, it appears that the default solution to helping those potentially identified as victims of sex trafficking is to call the Polaris Hotline — a service that Dr. Mehlman-Orozco calls "ineffective" and nothing more than an "intermediary for 911," as there's little follow-up with individual cases after the call is transferred to emergency authorities.

While well-intentioned, the practicalities of a policy like this stand to do more harm than good — and, as Santos points out, perhaps Marriott's billions of dollars in resources would be better spent in other ways. "If they truly cared about sex trafficked victims, they would be offering victims housing, education, therapy, healthcare, and job access instead of training their employees how to harass women or leading sex trafficked victims to a criminal justice system that does nothing to protect them," she concludes.

"Currently, [Marriott is] being sued by an employee who is a housekeeper because a man groped her... [and for] failing to protect more than 300 million guest's information from hackers. They are being sued for racial discrimination by a former employee, and they were sued by Erin Andrews when they allowed her stalker to book a room next to her and film her nude," Santos says. "How are we to believe that a hotel chain that doesn't even care for the wellbeing of their own employees or former guests is somehow responsible enough to help tackle an issue like sex trafficking without sex workers being collateral damage in that process?"