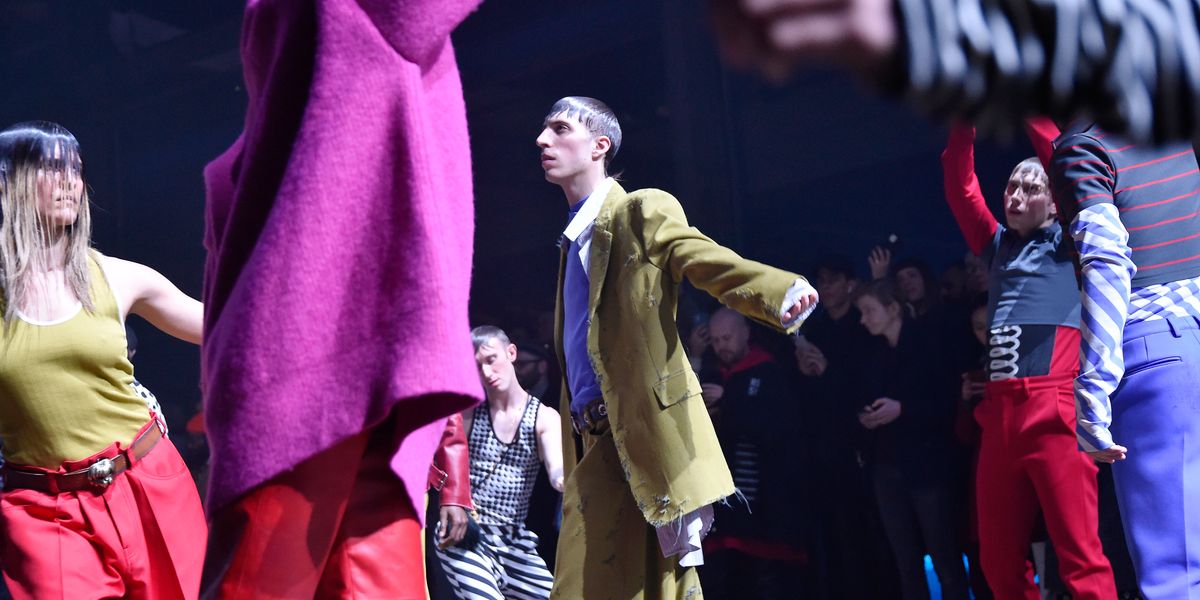 Turning the traditional linear runway format on its head, Marni Creative Director Francesco Risso staged an evocative dance performance for his Fall 2020 men's show in Milan this weekend. Risso teamed up with choreographer Michele Rizzo to create the dance number, which showed models going from a hypnotic trance at one moment to dancing with manic, wild gestures and back again.

Though some showgoers lamented at the fact that it was difficult to see the clothes (the set was dark and guests had to stand up on benches), it provided a welcome change of pace for the sometimes repetitive runway formats in Milan. This season, Risso took inspiration from the tale of Prince Prospero, the wealthy protagonist in Edgar Allen Poe's "The Masque of the Red Death" who locks himself in his palace along with other rich nobles to avoid a deadly plague.

"This is just a dance that takes us to the end of love," said the designer told reporters backstage, per WWD. "They are a collective in this never-ending party moving with a multiform uniform, expressing the persistence of time and the beauty of remaining and leftovers. It's just the reaching of the eternal love through the body language."

As for the clothes, those that caught the eye immediately were the series of coats that were bifurcated and spliced with different materials on both sides; boxy jackets purposefully frayed and destroyed; clashing colors and prints; and distorted sneakers and boots. (One of the biggest standouts was an irresistible hot pink oversized turtleneck.)

Much like the dance performance itself, the collection was a prime example of implementing contrasts, tension, and unexpected pairings to create something memorable. As the show notes read: "Flashbacks and fast forwards, of styles and movements, united in a choral flow of gestures."