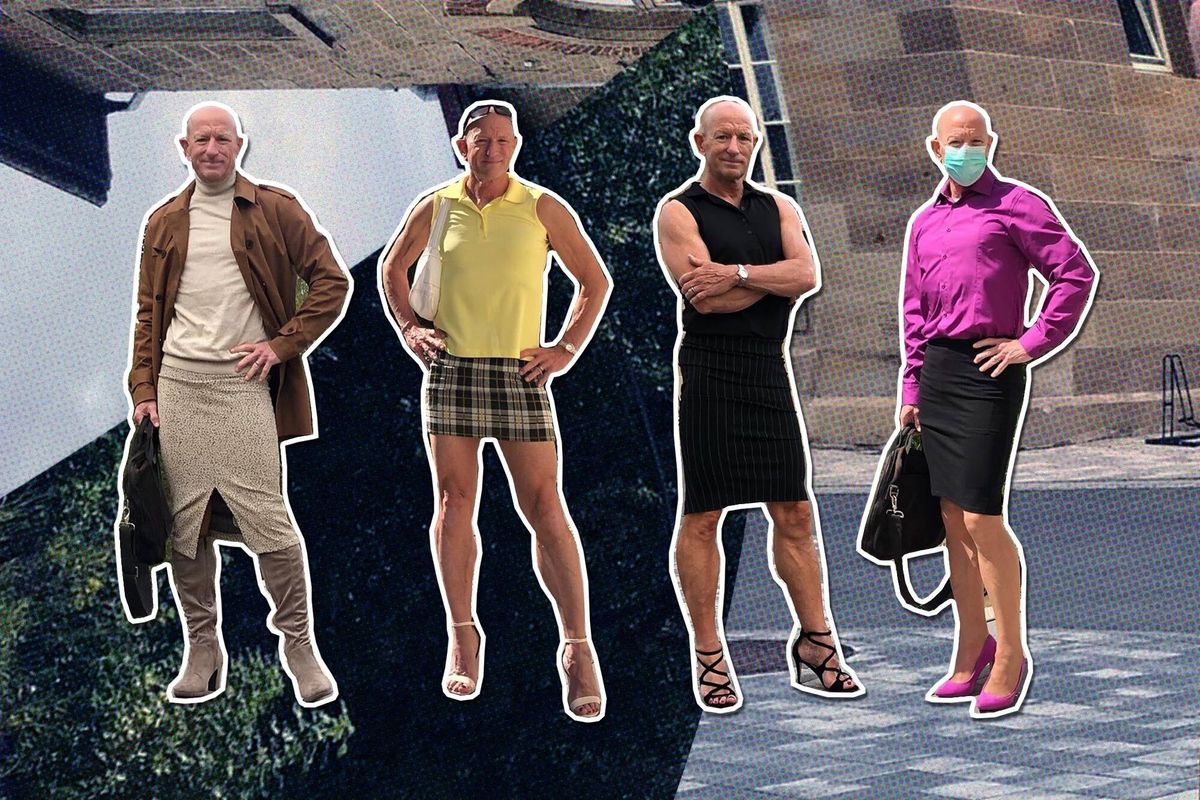 On paper, Mark Bryan sounds like an unlikely style icon.

Hailing from Texas, the 61-year-old grandfather, robotics engineer and football coach describes himself as a "straight, happily married guy that loves Porsches [and] beautiful women." And though you'd think he'd just be your typical all-American dad, Bryan has also become a social media sensation in the past week thanks to his fierce daily wardrobe.

However, contrary to what some commenters online believe, he says that his style isn't about "trying to be somebody else" or "impersonating a female." Rather, it's thanks to the fact that he's always loved the "more interesting" fashion choices — including the brighter colors and fun patterns — provided by womenswear.

"When you wear men's clothes, you have the tendency to wear just black pants, navy pants, brown pants and grey pants. It got kind of boring after a while," he says. "So that's one reason [why I started]. It was the variety that you have with all these combinations and stuff. There's a lot more colors. A lot more different styles."

That said, despite calling Donna from Suits his fashion "role model," don't expect to see him in a dress anytime soon — especially since the busts and necklines don't work for him. Instead, Bryan says that he now takes style cues from Meghan Markle's Rachel.

"I kind of switched to copying what Rachel wore, which was more the pencil skirts and the heels and a blouse," he says, adding that his wife helps him pick out stuff too. "I don't wear blouses, I wear men's shirts, so that's kind of adapted my style."

As for his preferred choice of footwear though, Bryan says that while he first started wearing heels about 40 years ago, he still feels "empowered" whenever he wears them out. And though he does occasionally face harassment from a "young kid in a group" who feels the need to "show off in front of their friends that they're the tough guy or the funny guy," he'll never stop expressing himself sartorially — particularly when it comes to wearing his heels.

"Maybe it's because the heels make me feel a little taller. I'm already six-foot, so I'm not really considered short," he goes on to muse, before explaining that it helps him project a special kind of "confidence" and "no fear" attitude. "But it changes your posture a little bit, so you're a little bit broader, you're more shoulders out. You're not leaning forward. And it kind of gives you a little bit more arrogance, I guess."

Granted, what's also partially helped Bryan feel more comfortable showing off his hybrid style in public for the past three years is the fact that he moved to Germany, where "they're more [tolerant about this] kind of stuff."

That said, Bryan says that he's still been "really surprised" by the amount of international attention he's gotten after his story went viral and was written about by Bored Panda — especially since he really only started the account to "document what I'd worn to make sure I didn't repeat myself too often."

"Now, we've had people show up to the office with cameras and TV trucks," Bryan says. "Trying to catch me walking in and out of the door."

And though that means that he's had to stop uploading photos from work, he's going to keep posting snaps of himself at-home or out in the world. After all, as Bryan explains, he's happy to continue being a style inspiration to other people — whether it be the women who've said that he's "motivated them to start dressing better for work," or the men who want to dress like him.

"I've been responding to people [saying that] if you're going to do it, just have confidence in yourself," Bryan says, "And it helps to practice before you go out, so you're not struggling walking in high heels."